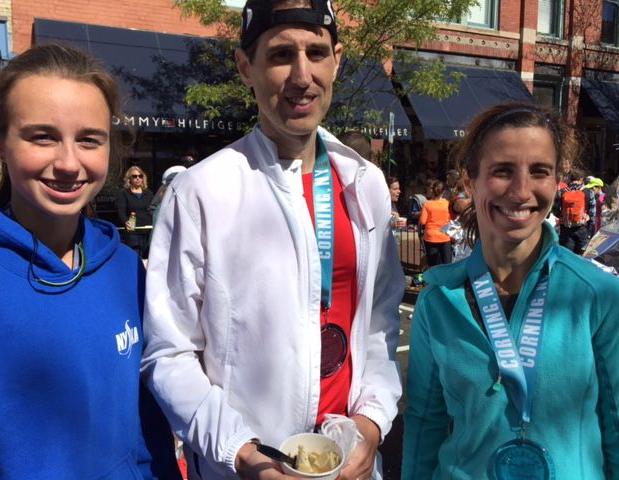 I signed up for the Wineglass after having done this race as my 2nd marathon back in 2013. I also ran the half in 2014.  After the 2013 experience, I said I'd never do it again. It was a hot, humid day that year and I considered it a once and done run based on my first experience. Then one day I heard a crash! My marathon medal had fallen off my wall and SMASHED into a million pieces. I guess I would need to do it again! I had 3 marathons under my belt by this point; Rochester 2012, Wineglass 2013, and Philadelphia 2013.

Rochester was a great experience and I was proud to just barely break 4 hours. It was my secret goal going in, and I ran 23 miles of it with my sister; what more could I ask for? I felt really prepared for Wineglass (enough that I was over confident that I was ready for a BQ). The weather wasn't a PR kind of day and in truth I really wasn't ready to run a BQ time. I did improve on my first marathon time though and was happy with my results. Philly followed just 5 weeks later. I signed up on a whim to join my friend Jenny. We thought it would be great fun, and it turned out our friends Chantelle and Rob were also doing the race. We all enjoyed a pre-race dinner together and somehow managed to connect the morning of the race!! This race was so hard from mile 20 onward that I cried as I crossed the finish line.

Wineglass 2015 would be my 4th marathon. Last year I focused on doing the Green Lakes 50K and didn't add marathon training to my season. This year I was excited for another road marathon. After doing a bunch of thinking and reading and waffling about possibly hiring a coach, I decided to follow a plan focused on a BQ. However, I didn't mention it to anyone. It was a private goal.

Normally I write up a plan and then later transfer it to the computer to reflect what I really ended up doing, but this year I am posting the actual scribbled up plan!! I kind of like seeing it this way. 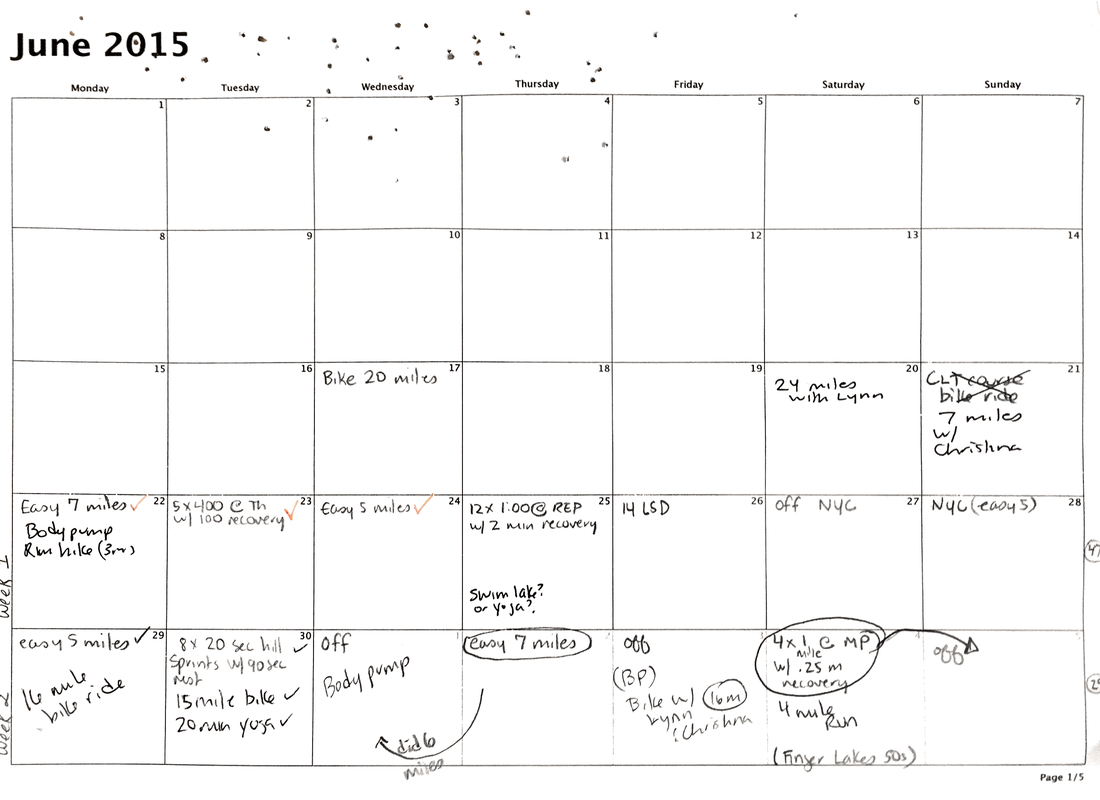 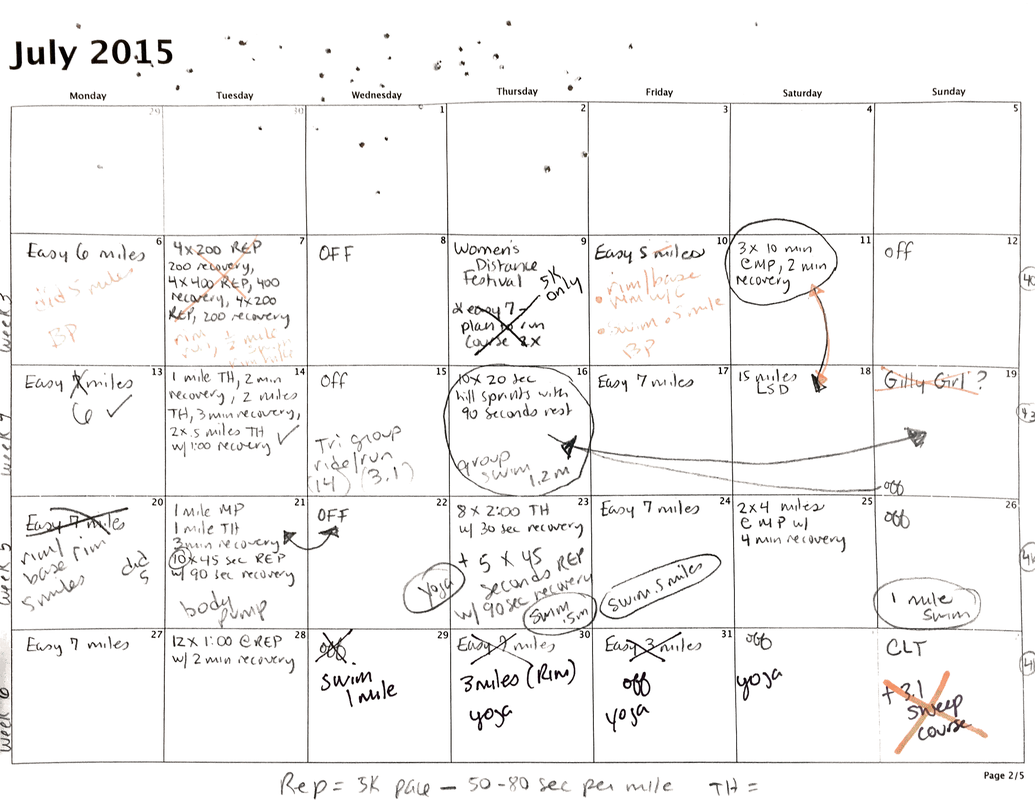 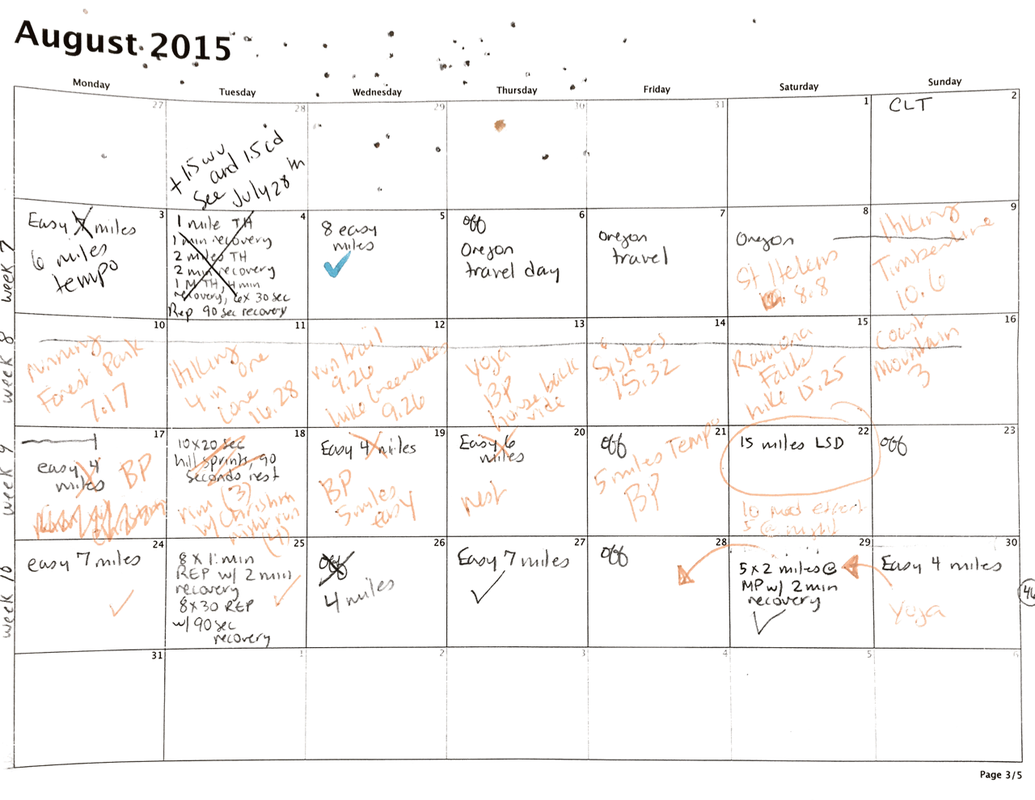 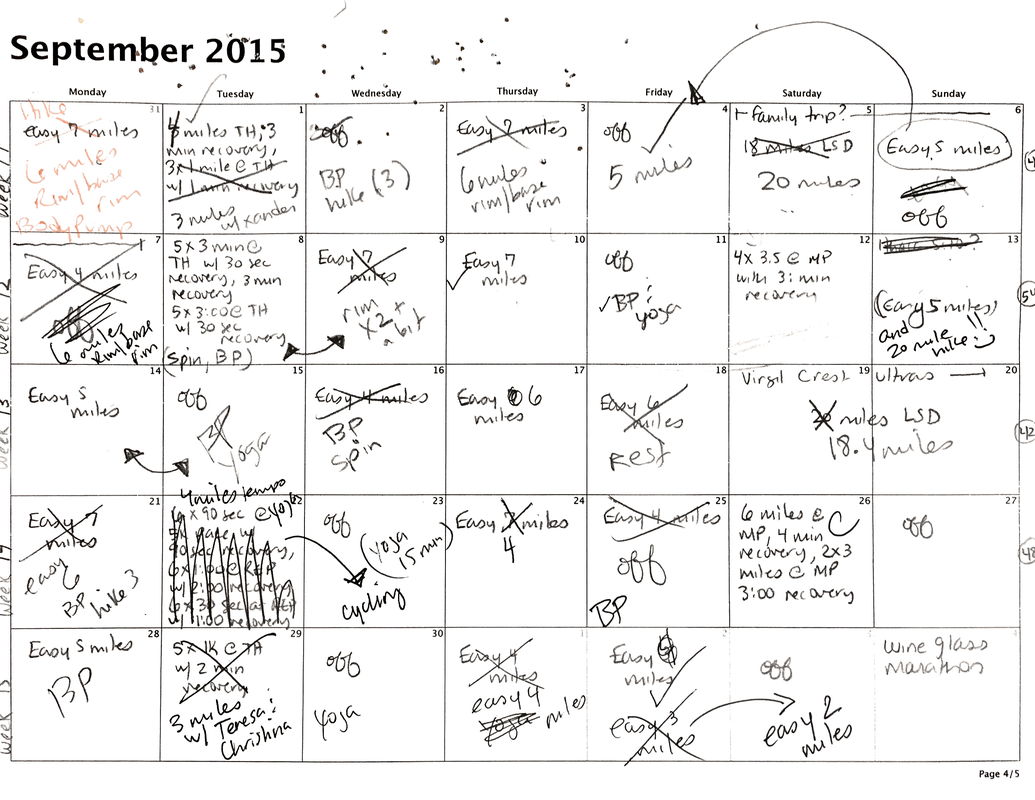 There were a couple of red flags with my training. The first was the timing for our vacation to Oregon. It was mid August, just when I should have been ramping things up. I left the entire vacation slot blank in training and said I'd "catch as catch can" for exercise. While I did spend most of the vacation hiking and even did a couple of trail runs, I logged no quality marathon training miles.

The 2nd red flag was that I signed up to participate in the Virgil Crest 100 Mile Relay. Together with 4 other teammates, we tackled the 100 mile trail run in the forest in Virgil 2 weeks prior to the Wineglass. This required me to move my 20 mile run up a week, and focus more on trail running for the latter part of the summer. Sometimes I thought this was a good idea, and the week after this event when I was utterly exhausted from the all nighter I really started to question my thinking. However, I had an awesome time so I totally wouldn't trade the decision! Even with these things, I felt reasonably confident that I was ready for the BQ.

Not that Into You

One really odd thing about this training cycle is that it was so compartmentalized from the rest of my life that I almost didn't feel like I was training for the race. I did almost everything on the plan, but I didn't obsess about it like I had for the other 3. Scott and I joked that this race felt like marrying someone you weren't that into. I felt strangely disconnected from my training and from the race. I think maybe it had something to do with the fact that I was so excited for Elizabeth to do her first half by herself!! She's run two with me pacing her, but this would be her first time running a half marathon alone! She worked so hard at her running this year that I almost couldn't wait to hear about her race! 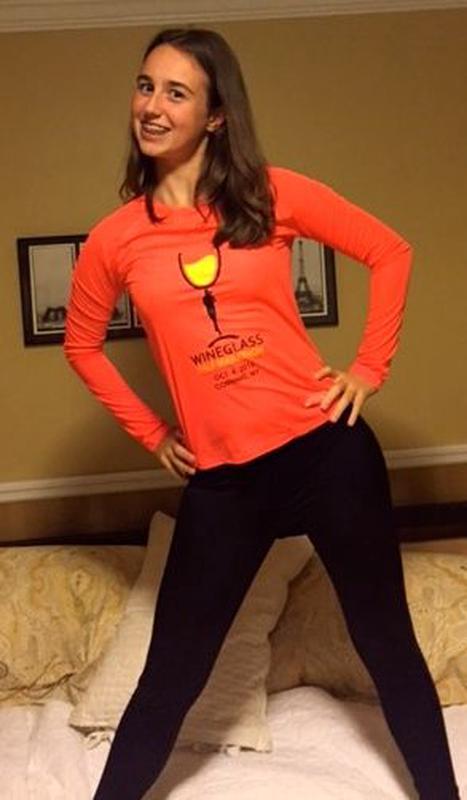 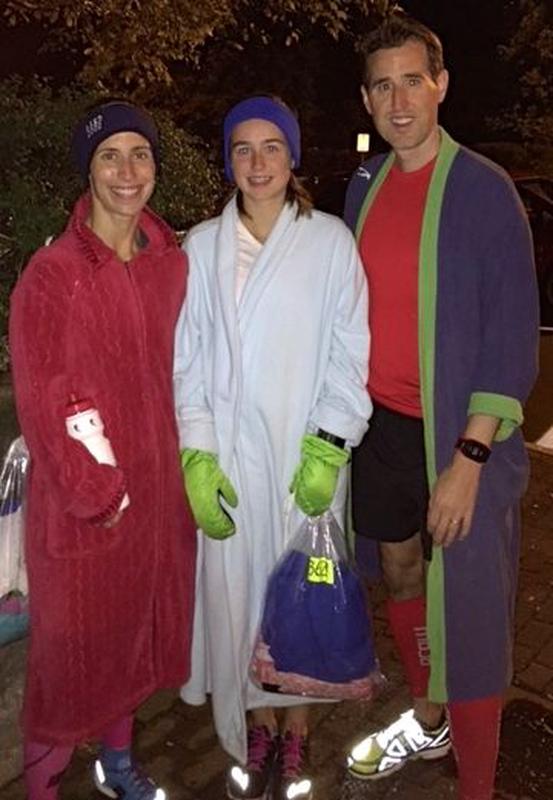 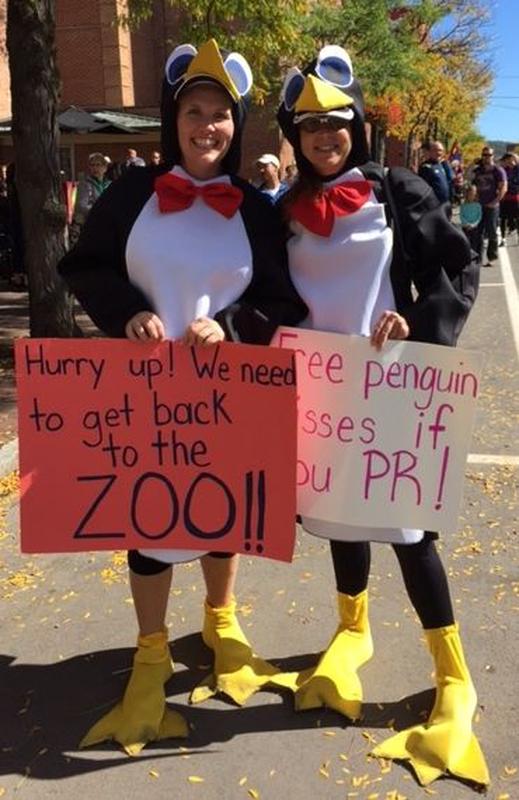 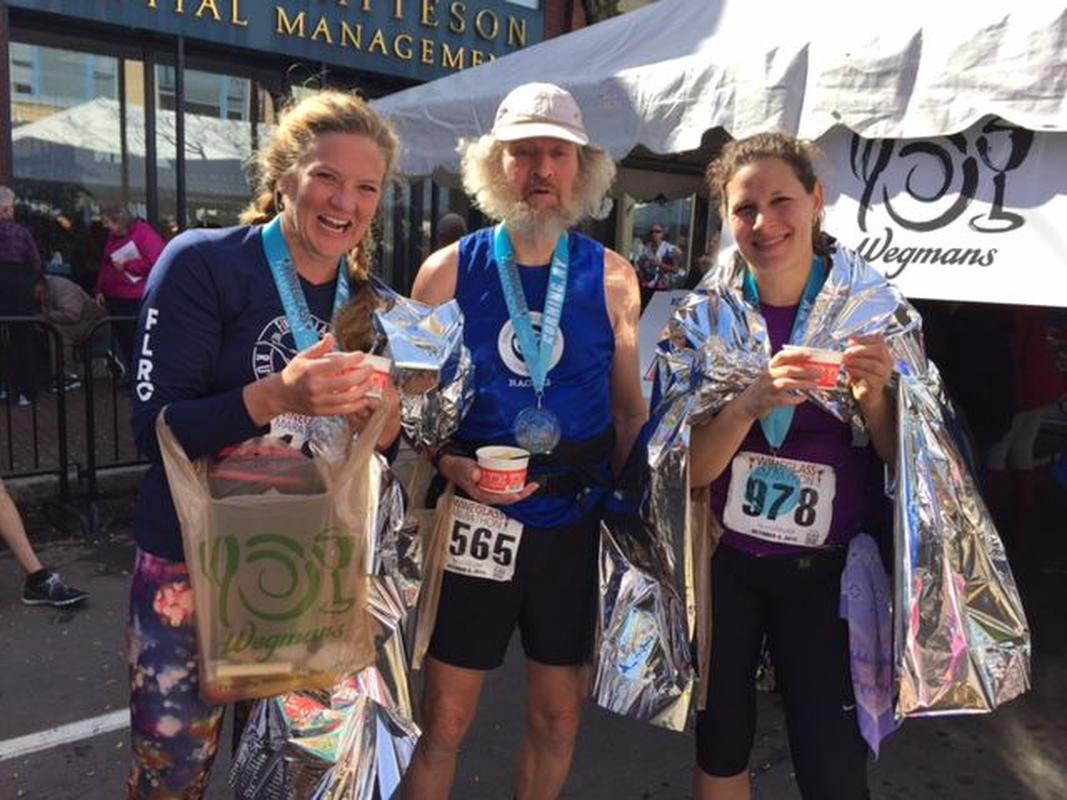 I LOVE this race! I started off thinking I'd do it once but it has really grown on me over the years. It is an hour from my house, and is very well organized while maintaining a great casual and friendly feel. It is a FUN way to spend a weekend.

After a bright and early wake up at 4 am (luckily since our normal wake-up time is 5 am, 4 didn't feel so early, nor did 7:45 feel too early to go to bed), we headed down to the start, followed by our friend Brenda Michaud. We had to take buses to our respective starts; Brenda and Elizabeth would hop onto the half bus and we'd take our spots on the full marathon bus. I was so grateful to Brenda; it really eased my mind to know that Elizabeth had someone with her for the start.

The bus dropped us off at 7 am (the race started at 8:15). Scott and I enjoyed chatting with friends Jeff Holbrook and Jim Miner. Soon we wandered out to the porta potties and ran into friends Jenny Henion, Jess Kerns and Joel Cisne. I looked around for other friends and ran into Jess from my BodyPump class. She was kind enough to take a picture of Scott and me. After that I warmed up, found a quiet place to get my head ready for the race and then shed my bathrobe and hopped into the start line.

The Race Starts at Mile 20

I started just behind the 3:35 pacer. My goal was to stay in between 8:13 and 8:36 for the race. My sister had sent me her splits from her BQ races. I had looked them over and chatted with her about working with the course. We agreed that I should work with the course rather that trying to take it slower than goal pace at the start just because that is the conventional advice. This course has much of its downhill in the first five miles so it would make sense to take that a little fast. I know from past experience that the flat part of the course really beats me up. My goal was to run a comfortable pace by feel, check my watch at the half mile alerts I'd set up and try not to overthink. This worked nicely. I stayed fully positive until after mile 17, all the while reminding myself that "the race doesn't really start until mile 20."

There was a BIG red flag for me at mile 14. There is a small hill that lasts about a half mile. The first time I ran Wineglass I fell apart starting when the 3:45 pacer passed me shortly after mile 13. Today I was cruising along at an 8:25 and felt like I was on top of the world. My playlist as a whole was rather uninspired but the song, "The Nights" by Avicii was playing and it just resonated well. I promised myself I wouldn't let thoughts linger or get too attached to them, positive or negative, but I got it stuck in my head that if I felt great here I'd be ok for the rest. I started more aggressively chasing "my rabbit" and started leap frogging with her, wasting energy in the process. I found a new rabbit and eventually another one. I continued to feel strong and was fueling smart with Gu every 45 minutes, while stopping for water at most water stops.

After passing the 22 mile water stop I heard "Go 3:45!!!" as I rounded the corner. I still had an 8:31 average pace on my watch at this point and was surprised the pacer was that much ahead of the 8:35 required. But, in the moment, I forgot that my pace was for what I'd run, not the actual race distance. I was a little over the actual race mileage, so my real pace was probably closer to 8:33 at that time. Soon the pacer group caught me just after mile 22. I joined them and remembered my pre-planned late race motivation.

I was working hard to stay positive. I didn't like being part of the group and I didn't like that I was having to work both physically and mentally to stay with them. Soon we passed a water stop. The pacer stopped to grab water, and I stopped to snag a cup too. My right hamstring was cramping and I was letting negative thoughts creep into my head.

I had a terrible flashback to high school track. A painful memory of a day I'd arrived late along with another girl. My coach sent us out for a 2 mile "horn" around the school complex. She was faster than I was and I desperately grabbed onto her shirt BEGGING her not to leave me behind.

I saw that pacer in the distance and I just wanted to cry. It had also suddenly gotten really warm; I'd only just shed my throwaway gloves 5 minutes prior but suddenly the sun was out and it was so hot!

Those last two miles lasted FOREVER. I actually watched my lovely average pace of 8:33 and slowly turn into an 8:44 by the time I reached the finish line. To motivate myself to finish, I set my interval display on my GPS to distance so I would know how many tenths of a mile were left once I hit the miserable last bridge.

Ultimately, I ended up with a PR by almost 7 minutes and at that finish line moment I really was ok with not hitting the BQ.

After I ran through the finish and got my medal I saw Elizabeth beaming at me. She'd crossed the line with a 1:54:26, a PR by about 7 minutes!! Her Social Studies teacher was at the race and he'd cheered her into the finish. She stood next to her middle school principal waiting for her dad to cross the line (read his race report) and now she was here to hug me. I quickly forgot all about my own race as she shared all the details of her run with me.

I really was happy with my time, until I wasn't. I don't have a strong desire to actually run Boston, but I do want to qualify. So, some I'll need to think about how to improve my outlook when I'm passed by a pacer. I need to think, "I'm not letting her get by me!"

A word to all race spectators. You are IMPORTANT!!! For most races, I engage with you and smile and try to remember my favorite signs. For this race, I tried to take your energy and not give any energy back. I was so focused on my running. But, these two penguins (in my picture above) kept appearing all over the course. They brought a huge smile to my face every time I passed them, and I felt lucky to see them at the end and get their picture. I remember others too and every person that was out there added something to the race for me and to so many others. Thank you!!

Next year is the "year of the bike!" and I'm going to tackle an Olympic Distance Triathlon. I'll need to be really disciplined to get the mileage in for all 3 things. I know I got very sidetracked by swimming in preparation for the Cayuga Lake Sprint Tri this summer.

I just ran the idea of running the Buffalo Marathon over Memorial Day weekend next year to Scott. Scott has declared next year to be, "the year of the Half Marathon" so he's not quite so sure he wants to kick off the season with a marathon. We'll see what the year brings!