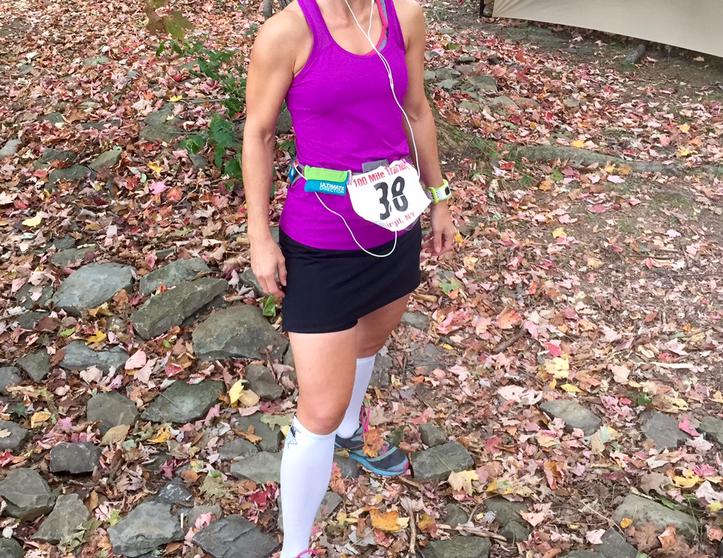 On a cold, dreary day on May 31st while waiting for Scott to finish the Cayuga 50s, Ashley Schmidt casually asked me if I'd like to join her all-female team for the Virgil Crest 100 miler. Our mutual friend Doreen was also waiting and she'd already told Ashley she'd like to give it a go. A new challenge. I told her I'd think about it and pretty soon Scott was crossing the line and we were cheering like crazy! 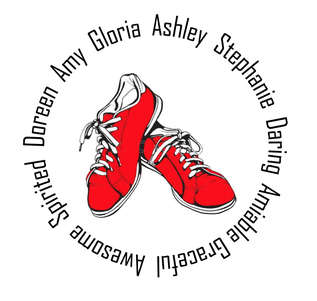 The front of our shirt that Doreen designed for us.

I decided to go for it! It would be my first relay experience; a way to try out a serious ultra while only dipping a toe into the physical training required. I mentioned it to a few people casually in case we needed more people for our our team of 5, however Ashley had no trouble quickly filling our team. Read her blog for her perspective of this event. A month and a half before the event, one of our teammates decided she'd like to do a different ultra that weekend if we could find a 5th. I texted my friend Stephanie who had seemed really interested and YES - she was still willing to give it a go! After a lot of Facebook messaging and some really unusual name ideas, we finally decided on "Team No Name" for our group.

Doreen worked on making a logo for our team shirt and Ashley had them made. They arrived in time for race day!

Ian of Red Newt Racing organizes this race and in the weeks before the race he sent us detailed information about each leg of the race. I offered to slot people into spots based on their preferences with a goal of keeping our mileage roughly even and our running staggered. A couple of us wanted to run our sections back-to-back and a few wanted them separated. We'd each run 4 sections of the total 20. After several hours creating a spreadsheet and putting each runner into spots we were ready! I even modified Scott's pacing chart from CT50 to predict our timing based on each possible per mile average. Everyone was running roughly 20 miles, we all had at least one night slot and all was good.

About 2 weeks out, all participants received an email from Ian about course changes. There were some insurance issues with the ski slope that operates in the area and Ian was going to have to re-route the course. The new course had 16 sections with longer distances. Time for a new runner plan! After doing it once, it was much easier the 2nd time around and soon everyone's sections were planned. Doreen is training for a trail marathon in two weeks, so she would do a back-to-back and be the one runner to take 4 sections instead of 3. She'd have about 25 miles and the rest of us would have 18 or 19 and change.  We printed the files and popped them into a binder along with directions to Aid Stations. I missed one of the stations in my file and luckily Ashley had grabbed the official map at packet pick up. It had information for the station I was missing. Here are our binder files.

After gathering for a pasta dinner at Stephanie's house with the team the night before, I practiced setting up our camping tent in case we needed it, packed my things in our huge beach bag and tried to settle in for bed. Nerves or allergy medicine or both kept me awake for most of the night. Soon it was 4:55 and time to make some breakfast and hang with Scott for an hour before heading to pick up Stephanie. We drove over to pick up Ashley, and after a quick drop off of cake and cookies for my business, we were on our way to the event! Before we knew it we were united with teammates Doreen and Gloria and posing for a pre-race picture!

Gloria was off right at 8 a.m. and we drove the short distance over to the Hitching Post Aid Station to wait for her to arrive. As we waited we chatted and got to know each other better. 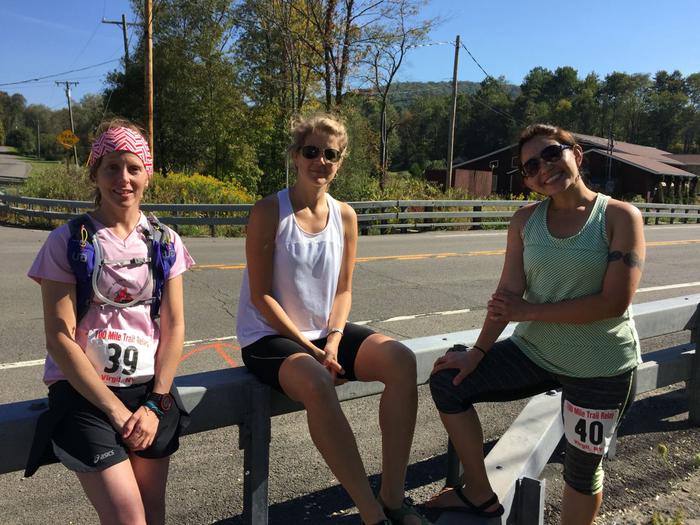 Hanging out at TenKates Aid Station while Ashley ran leg 2 of Virgil Crest 100.

The morning was fun, casual and easy. It was sunny, not too hot and we just had one runner after another heading out. During these morning hours, I thought about how the race didn't really start until dark. That was when we'd be exhausted, muddy and sleepy.

My first leg started at 2:20 pm. We walked the .5 mile on trail up to the Rock Pile Aid Station and waited for Doreen to arrive. It wasn't long before we slapped hands and off I went. She had us at about a 12:45 average pace at this point (she's VERY fast and in her two legs she'd dropped our average pace from a 14:10). The forecast hadn't called for rain until 9 p.m., but just minutes into my run it started pouring. It rained for most of this leg. I was thankful that at the last minute Stephanie suggested that I not carry water for this 5 mile section. It wasn't very hot, and it was windy and rainy so I really didn't need water.

The trail followed part of the Forest Frolic race course and unfortunately the rocks on a very long hill portion of the trail were really slippery from the rain. I walked many of the hills and missed a turn on the course, adding some distance. Since I started my GPS late, it ended up looking like I'd been right on for the section.

Memorable moments from this leg; running along a washed out creek bed thinking, "Ian must have a different definition of beautiful single track" before realizing I was actually on the wrong trail, and the pure panic I felt when I discovered I'd missed a turn. If I was running this solo, I'd have been much calmer, but I worried about letting my team down! My average pace for this section was 12:37 but it did contain about .3 extra so officially it was over 13 min/miles for the section. I felt pretty embarrassed when I finished this; getting lost on my first leg wasn't part of my plan. My team was really cool about it, and soon we were off to the next stop!

I had two teammates running between my 1st leg and 2nd. I stayed in the car and tried to rest a little. Looking back on it now, I think I did take a little cat nap while listening to other relay teams chatting around me. After my rest, I went over to the Aid Station area to join them while they waited.

Soon enough Stephanie was finished with her section and we left the TenKates Aid Station, run by the Ithaca Triathlon Club, for Hitching Post. I was excited about this because my family was working this station. This station was being manned by the Finger Lakes Runners Club. While waiting for Gloria, we enjoyed talking with friends. The weather was nice, it was approaching dusk and everyone was in good spirits. After some waffling, I decided to head out with one of my head lamps on my waist just in case darkness fell while I was on the trail. Gloria arrived at 5:40. We were at a 13:15 overall pace at this point.

As I entered this section, my friend Pete Kresock was right behind me. Tackling the whole 100 by himself, he was looking strong and confident. We chatted briefly and he bid me adieu and said he'd see me at Hope Lake as I headed off. This section was so runnable! And, I was SO hungry!! I felt like I'd snacked reasonably well, but my stomach was growling and I felt a little weak. Luckily I had a Gu in my belt and at mile 2 I reluctantly took it out. I decided savoring it on the uphill portions was my best bet. Each time I went uphill I took a little sip like I was nursing a cocktail. I passed several 100 milers on this stretch. Each one said, "good job" and I congratulated them and said, "I'm only doing the Relay!" as I went on my way. Soon, I caught up to my friend Scott Ulrich. Jenny and I had run with him for awhile during the Green Lakes 50K last summer. He looked strong and happy. After a few minutes of talking, I wished him well and continued on.

This section was amazing! I bounded into Hope Lake through the 50 mile finish line feeling happy and strong. Later when talking to Scott I said, "if every section were like this I'd want to do the whole thing!" It was one of the least challenging sections of the course with a net loss of 200). I averaged a 12:28 mile/hr pace for the section.