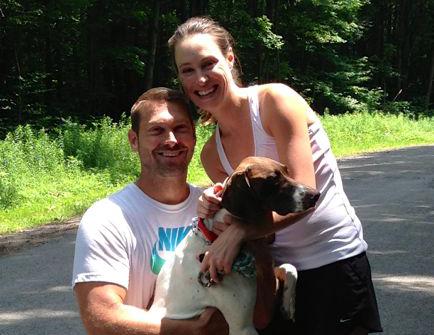 My training plan for Green Lakes called for a fall back week with a long run of 16 miles. Jenny and decided that two loops of the Forest Frolic  would be perfect for our run! We'd be running different terrain and there would be a built in Aid Station at the race finish! After contacting the co-race directors to let them know our plan, it was official.

The week prior, I decided I would feel too much pressure to race if I wore my FLRTC singlet. So, that morning I joined Jenny in my usual weekend running gear (We've both been wearing the same shirt and top 90% of the time on these weekend runs) and we headed to the race start. Many of my FLRTC teammates were there, and it was fun to see them and to know so many runners at this event! Before long, Jay announced that it was time to start, and Jenny and I were off. We quickly dropped toward the back of the pack as we headed up the big hill. This course has 1700' of gain per loop, and we dropped into a sustainable pace early on. My unspoken goal; to be consistent on the pace for the two loops. The trail was a little wet and slippery in spots, mostly tree covered and really enjoyable terrain. 3 or 4 miles into the run we hit a road and weren't sure which way to go. Luckily, teammate Kerra was behind us and she and her friend knew exactly where the trail headed. We joined them in running down the road and back into the trail. As we hit the end of the course, we saw a cute dog that just looked so peppy that I commented out loud "how adorable!" People were cheering for us and Jenny remarked "I totally forgot that this was a race." (I had also forgotten this little fact). We finished near the back of the pack, enjoyed some of the best watermelon I've ever tasted and chatted with a few people before heading back out for loop two in the opposite direction. We had waffled briefly about which direction to head, and decided it would be fun to mix it up. This turned out to be a really nice choice.

About 5 miles into our 2nd loop we heard what we thought was someone shouting "Hello!" in the woods. We were a little worried for a minute, not sure whether to continue running when we realized this person was shouting a name. We ran into Mike searching for his dog Milo. He and his fiancee were here for a two week vacation and their dog had just wandered off. We spent about 10 minutes describing the dog we saw at the finish line, while he searched his phone for a picture. At the end of our chat, we realized that he had been WITH Milo when we saw Milo. Dead end. Jenny took Mike's number and we promised to keep an eye and ear out for him as we ran. We ran into another couple who had spotted him, but had been unable to get him to come to them. Pretty soon we were done with our 2nd loop and back at the car. What did we see? Milo. He had found his way back to their car and was waiting. His owners arrived and we snapped a picture (above)! A happy reunion.

Final Thoughts While this was an AWESOME way to get our mileage, it is really challenging to not RACE a race. It felt like it took self control and courage to stick with our plan, and we both found ourselves tempted to tell everyone (and what the heck, actually telling) that we were going to do the course twice. We are both pretty seasoned road racers at this point, but truly novice trail racers, so I for one was also grateful not to be racing. It was akin to being able to say "I didn't really study" when going in for a test back in High School. As for having an Aid Station that we didn't stock, that was priceless! Food is SO much more appealing when you don't know what is going to be there. The watermelon ... yumm!! And, that unspoken goal? Our 2nd loop pace was just 30 seconds slower per mile than our first loop. Nice!