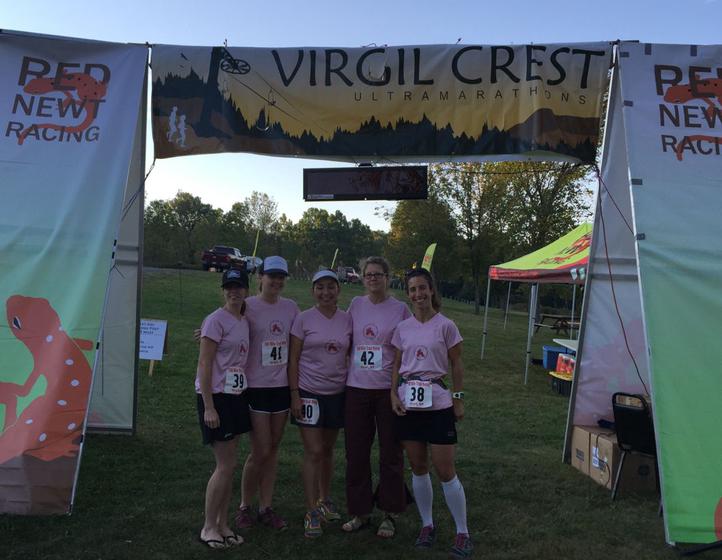 After I finished at Hope Lake, Gloria and Ashley headed out to wait for Doreen at the Hitching Post Aid Station They expected her in less than an hour and wanted to be ready for Ashley to take off right away when she came through. Back at Hope Lake, I enjoyed a delicious veggie burger and salad from Yellow Truck Catering while talking with Stephanie and Joe Reynolds and several others. I asked my family to come back to say goodbye when they left their shift at 8:30.

Soon, while hugging Scott and the kids goodbye Scott asked me, "when do you run again?" He sounded serious and worried. I said that I was the 2nd to last leg and predicted it would be between 3:30 and 4 a.m. "There is a BAD storm heading your way between 9:30 and 10," he said. Stay dry if you can. Get things organized now. Stephanie was our next runner. She'd be on the toughest section of the entire course for the entire storm. Worry settled over us.

We drove to TenKates to wait for Ashley. Doreen had her sneakers drying behind the car and Stephanie got ready to run. It was just after 9, so we had plenty of time to wait and hope this storm would somehow be milder than the radar showed. Gloria and I tried to rest in the car. Only a few minutes after getting settled, we heard light raindrops start to fall. I said, "it's starting," and Gloria said, "the sneakers!" She quickly dashed out to get them and by the time she made it back into the car it was POURING! It was the kind of rain that would make you pull over to the side of the road if you were driving. My heart was breaking for Stephanie. I tried unsuccessfully to rest. I was worried and it was too early to be tired. I laid there hoping she'd be ok, that she wouldn't get lost and scared. I thought of Ashley finishing her section on a slippery downhill road totally exposed to the elements and hoped she was ok. Soon it was 9:40 and Ashley arrived back to the car with Doreen. Stephanie was off and Ashley was soaking wet and cold. We decided to go back to Hope Lake (where there were permanent restroom facilities and a pavilion) for 45 minutes for everyone to change and get ready for what was to come. I was in my 2nd outfit; the last clothing I had packed. I stayed in the car until there was a break in the rain and then went inside to put my skirt on (I had long pants for warmth while waiting, but realized that they'd just get wet as I walked up to the Aid Station).

There are two Aid Stations in this race that are a little tricky to get back and forth between in a timely fashion. The group was worried they wouldn't make it back in time for me when I was running the stretch, so they'd hatched a plan for the 2nd time through. I'd wait at Trails Roc Aid Station with Doreen and Gloria while Ashley and Stephanie drove onto The Rock Pile. Doreen, Gloria and I walked the .25 mile to the Trails Roc station. It was pouring and we quickly took shelter under their pop-up tents. Ashley remained in the car trying to get some rest before her next leg. We'd wait for Stephanie and then Gloria would head out and I'd walk Stephanie to the car. It is a little complicated to explain, but ultimately Doreen and I spent about 2 hours hanging at Trails Roc while Gloria was running and Ashley was getting settled at her next spot. This was a great plan except for two things. It was really cold, and I hadn't napped yet! By the time I would be back in the car, Doreen would be running and I'd be up next.

I stayed reasonably warm with Scott's New York City marathon poncho and Doreen was really chilled in a trash bag and her running gear. I gave her my sweatshirt to wrap around her, but it didn't help a lot. Thankfully they had a lovely fire that we mostly stood around. I ate what felt like a ton of food here. It was the middle of the night and I was really hungry. Doreen was struggling with stomach upset and wasn't able to eat much at all, and she was very cold. My morale dipped here. I was tired and scared for my section. I was worried about not being able to stay awake for my run. We talked intermittently and I shut my eyes occasionally but soon it was time for Doreen to head out. I'd be next. We'd drive to TenKates and I would start preparing.

Ashley had finished her section. After thinking she was going to have to hike the entire thing, she ran the whole section!! She was over the moon happy. Her calf had been hurting, but it abated enough for her to run happily for this leg. I was so happy for her, while at the same time shaking with fear about my section. Ashley got me coffee and then she and Gloria went to hang in the Aid Station while Stephanie and I stayed warm in the car. I didn't expect Doreen until 3:45 or so, but still I went for a last bathroom break around 3:20 and started to get ready. Suddenly at 3:30 Ashley came running to the car to say she was here! I dashed out of the car anxiously. False Alarm. It wasn't Doreen, BUT it would not be long now. It was time to pack my extra head lamp batteries and get ready to tackle this section. I had opted to use trekking poles because of a conversation Stephanie had with Joe Reynolds. He'd talked her into using them for the alpine section and she was very grateful. Doreen also used them and I felt they'd be useful in protecting me from falling, and would help me be more confident with my footing. My body was shaking in fear as Doreen came through and I headed out onto the road.

To Joe Reynolds, I am forever grateful

I ran up Carson road. This is a road that I've stomped up in frustration before. I didn't think I'd be able to run it tonight, yet I ran every step. I was happy listening to the click click of the trekking poles. This was going to be fun! I had this. At almost exactly the 1 mile mark, the trail turned into the woods from Carson road.

I loved this trail. Even in the dark I could tell it was most like the trails in Oregon that I loved. It was technical, there was some exposure, and it was (I imagined) beautiful. However, it was poorly marked. I'd talked with the woman who marked it and she warned me. I would need to follow the white blazes and it could be a long time between the reflective ribbons. She'd marked parts of the course really well, but ran out of flags. Grateful for this insight, I watched for white blazes high on trees. The terrain was very runnable, but I was running at a very slow speed. I watched my per mile pace drop from 12 something at the top of Carson to 14, then 15 and 16 by mile 2.25.

At mile 2.5, I lost the blazes. There was a fallen tree and I didn't see the next blaze anywhere. After scouting around and finding nothing, I decided to just stand there. I was going to wait. Someone would come and I would just run with them. No more getting lost for me. Yup, that was the plan. I considered calling my team for directions and then laughed thinking of them trying to follow what I was saying. I watched my per mile pace tick up to 17 and then 18. I had to move. I couldn't stand there all night. I went past the fallen tree and sure enough after walking a little bit down the trail I saw the next white blaze. I could continue.

During this entire stretch the mud was so slippery I called it the "mud skating rink" and repeated, "thank you Joe Reynolds" over and over. Never having been the type of person to dedicate a mile of a marathon to one person (I can't keep a thought in my head while running a marathon) I spent this long stretch thinking about when I first met Joe, and the little tips I'd picked up from him over the years, "look up high at blazes with one eye and keep the other eye on the trail." It was Joe who encouraged me to try my first trail race shortly after meeting him the first year I co-directed the May Day 5&5 in Trumansburg. After talking to him I signed up for the race he suggested. Stephanie (one of my teammates on this relay) and I ran every step together. I do not exaggerate when I say that one of the thoughts in my head was, "these poles are keeping me alive." It was 5 a.m. and I was exhausted and scared. The 1, 2 rhythm of the poles kept me going.

It's always darkest before dawn

Soon dawn was approaching. It was a little unsettling to see light in the distant sky. I had my watch set to the night setting and it drained the battery. Just after mile 6, the battery died. By this point I could already see Hitching Post in the distance. My team would be waiting for me and Stephanie could bring us in. It was a joyful reunion made perfect with a delicious grilled cheese made to order from Bob Talda. I scarfed it as I shared all my little stories. Soon we headed back to Hope Lake to wait for Stephanie.

It was almost time to celebrate! This great team of ladies had run hard, worked together and we got to know each other during these 24 hours. Stephanie ran into view just after dawn and we cheered like crazy for her. We'd finished around a 23:30. Race director Ian, of Red Newt Racing and Finger Lakes Running and Triathlon Company took our picture, gave us our finisher glasses and socks and congratulated us on a great run!

We said good-byes to Gloria and Doreen as they pulled away in their respective vehicles. Ashley, Stephanie and I had driven together from Ashley's house. On the say home, Ashley asked, "Would you do it again?" Neither of us answered. Later she said, "Should we find something for next year?" I don't know yet. It was FUN, challenging and yet scary and overwhelming at the same time. The best thing I can compare it to is childbirth. I have a feeling that the painful memories will fade and only the fun ones will remain. Which might just mean you'll find me as part of a relay team again! Many thanks to Ashley for suggesting this, to Ian for offering the relay for runners that aren't really ready to enter the full ultra distance, and to Ashley, Doreen, Gloria and Stephanie for being amazing teammates!