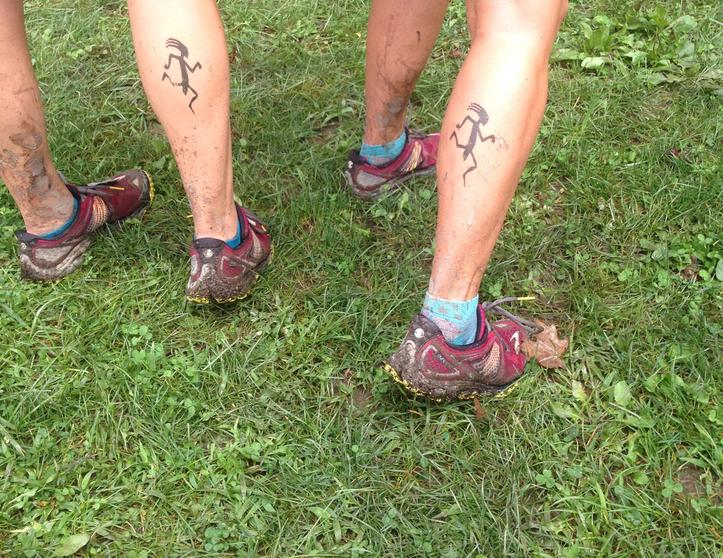 This whole journey started when my name wasn't pulled for the NYC marathon lottery. Needing a new goal, I searched around for fall marathons and didn't find anything screaming out to me. Scott and I were both bitten by the trail running bug when we watched my sister at the Western States 100 miler last summer, and Scott had already signed up for his first 50K, so naturally a 50K was a top contender.

I settled on the Green Lakes Ultra Marathon because I LOVE those lakes and started training with my custom plan. The plan incorporated all that I hoped to keep doing while training well for my first 50K. My friend Jenny and I have trained together for all the marathons we've done (5 between us) so naturally I hoped to talk her into joining me in the GLER. Jenny loves the crowds and energy of the big marathon, so I wasn't sure she'd be interested. Since she also wasn't finding a big city fall marathon that was calling to her, she decided to start following my training plan. Before long, we were weeks and weeks into the plan. Things were going well! And, if memory serves, Jenny signed up for GLER right after Scott finished the Finger Lakes 50s in early July.

I wrote about every week of training during the 16 week process. Over the training cycle, I managed to do almost every workout. The last couple of weeks were crazy with vacation and a sore Achilles. The few days before the race I had 3 of the roughest runs I had during the whole training cycle. I told my family not to come up to watch, and warned Jenny there was a chance I could not finish this distance if my Achilles felt the way it did for the last week. (Jenny and I planned all along to run together, so this would derail her plans as well). But, with a hopeful spirit and trust in my training, I headed up to packet pick-up at Fleet Feet Sports in Syracuse with Jenny. 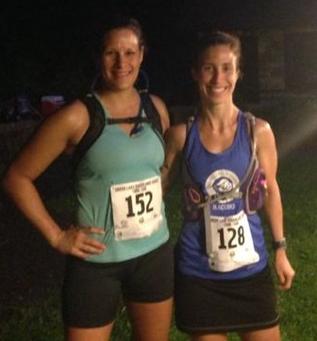 Before the start with Jenny

Fueled by a great pre-race dinner at Pastabilities in Armory Square with Brenna and Jenny, we headed off to sleep around 10 p.m. Brenna lives a few miles from Green Lakes State Park, and she graciously offered to host us, so we were able to sleep "in" to the relatively late pre-race time of 4:30 a.m. After a quick breakfast of an english muffin with peanut butter, some iced coffee and cherry juice we were off to the park. Upon arrival, we had time to check in, meet up with my fellow Finger Lakes Running and Triathlon Company ambassadors and begin our event.  The run started at 6 o'clock on the dot, and we quickly settled into a comfortable rhythm.

The race is comprised of four 7.75 mile loops. The terrain varies from lakeside gravel paths, spongy lakeside wood chip paths, to forest with a portion taking place in open grassy area referred to by the race organizers as "the Serengeti." It was a cloudy day with really high humidity and a pretty good chance of rain. As we headed into the forest, I felt like I was suffocating in the humidity, and was blissfully happy when the Serengeti felt nice and breezy! We cheerfully ran up the hill to the first power line cut and passed a big cluster of people. We both felt pretty strong, and enjoyed the rather soft surface of the Serengeti (for our one training run on the course it was hard packed and much less forgiving). Time flew by rather quickly on this loop as we were leapfrogging people, chatting with fellow runners, and enjoying the scenery. On the gradual downhill back down to the lakes from the forest, I tripped on a root and nearly fell, but caught myself well. We came into the main Aid Station at 1:22:16, fueled up and headed out for loop 2.

It was nice to know what to expect for this second loop. The first 1/4 again felt the most challenging and the trip up through the woods was a bit more tiring than the first time. We power hiked hills we had run during the first loop, and people spread out enough that we didn't leap frog anyone. We stopped at the mid-way Aid Station after skipping it on the first loop, and I scarfed down some potato chips and a few peanut m&ms before heading off. Jenny and I always have plenty of things to talk about, but neither of us felt very chatty on this loop, and it felt longer than our first time around. We stopped for a bathroom break before finishing up loop 2 with a 1:29:54 for a total time of 2:52:10 for the first half. As we were standing in the main Aid Station, I looked back and saw my friend Scott just entering the area. Knowing he'd catch us, I didn't try to grab his attention before we headed off.

Our 3rd loop started much the way loop 2 did, but this time we both knew this was going well! I didn't want to jinx us, but I had to point out that we had finished 16 miles already and we had a sub 3 hour time. Most of our training runs of this distance lasted MUCH longer, so this was really exciting! We congratulated ourselves for training on the hilly terrain in Ithaca, often seeking out the most challenging routes we could find! Then, as we hit the 2nd hill through the woods, Scott caught up with us. We chatted about how we were all feeling, and settled into a comfortable pace together. He was doing the 100K and Jenny hadn't met him prior to the race. They chatted (at this point I was feeling happy enough to run, but not quite energetic enough to carry on a coherent conversation, so I welcomed the opportunity to listen) and we stayed together until the end of the third loop. During this last 2/3 of the loop it started raining. It quickly went from drizzle to downpour and pretty soon our feet were soaked! Luckily, we had done some of our training runs in rain and with wet feet, so we felt ok. We caught ourselves commenting happily that we had one loop after this, only to quickly realize that Scott had 5 remaining! We bid each other a temporary farewell when we arrived at the main Aid Station. Our 3rd split was 1:34:34 and our overall time was 4:26:43. We just happened to be at the main area when the first female finisher came through. It was her very first ultra and she WON for the women!! 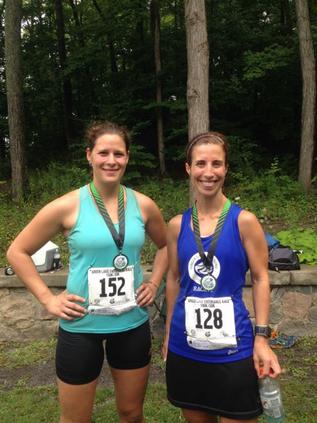 Jenny changed her socks, and we decided to brave the last loop without our hydration packs. Our clothes were sopping wet, and it would feel nice to drop some weight. With only 4 miles to the next AS, it seemed reasonable to go without our water. The trails were really muddy by this point, and we spent more time focused on our footing. As we entered the 2nd hill in the woods I felt an acute pain in my foot. A blister had formed and popped (I suspected and later confirmed). It was over as quickly as it happened and we headed up to the Serengeti for the last time. I was wearing a GPS, and when we hit 26.2 I told Jenny. We were now on uncharted territory; our longest run ever! Running low on energy, I thought we were pretty close to the Aid Station. At mile 27 Jenny commented "each step is a new distance for us" at the same moment I realized we were farther from the station than I thought. I stopped and said "I have to walk." A moment of "I don't think I can do this" came and left just as quickly. We were less than 100 yards from our Aid Station, and we ran in confidently. Scott arrived just as we were heading out, and we wished him good luck on his remaining laps just in case we didn't leap frog again. 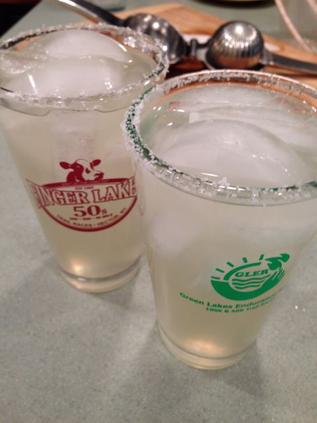 This last trip down back to the lakes, the footing was really treacherous with the wet roots. I was very grateful that I had almost fallen on loop 1. This near miss made me super aware to watch my footing the remainder of the run. Before we knew it we were coming into the Round Lake trail; the 2nd to last portion of our last loop. We caught up to two ladies whom we thought were way ahead of us, and we enjoyed chatting with them for a minute before wishing them luck and heading off to complete our final 1.5 miles. The sun was coming out as we finished with a last loop time of 1:37:19 for an overall time of 6:04:01. Our first 50K was in the books! Race Director Tim Hardy met us with medals and our pint glass and we celebrated with Gatorade, pictures and popsicles. (and later, at home I enjoyed margaritas with Scott in my new pint glass) 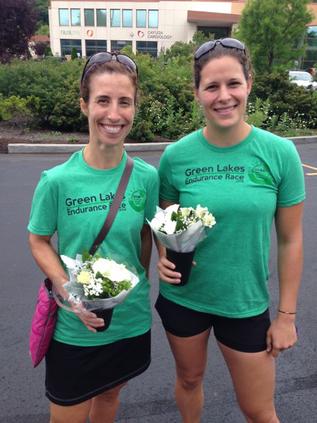 With flowers from Scott to congratulate us!

I am SO glad I participated in the GLER! The terrain is beautiful, the training helped me grow as a person and a runner, and I feel tremendously grateful to have had the opportunity to participate. I am so thankful for the support from all my friends and family for this 16 week adventure! A friend asked me after the race yesterday if a 50 miler was next. I think that for now, I'm happy to have added trail running to my life, and am looking forward to some rest before deciding what will come next. After the Cayuga Lake Tri early in the month, I did sign up for a Total Immersion Swim class this fall, and I'm very excited to start working to improve my swimming for next year's multi-sport event(s)!