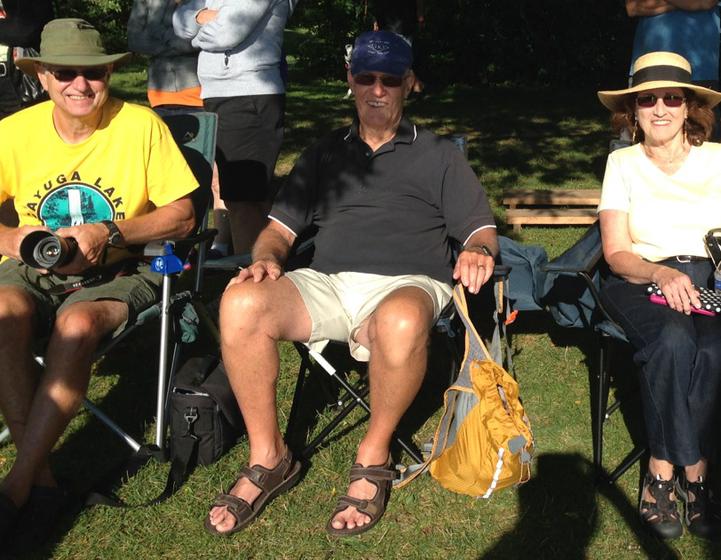 The CLT tops my list for favorite events. Located just 3 miles from my house in the beautiful Taughannock Falls State Park, it is a beautiful location. It's a time to see so many people I know out on the course! Friends, fellow Finger Lakes Running and Triathlon Company ambassadors, and of course my family! Scott's parents have volunteered as body markers for several years and my parents always come to the event for the whole morning to support us.

This year it was also a time to see many people from my Total Immersion swim class with Shane. If you have seen my blog before, you may already know that this year was my self declared, "year of the swim!" I saw Anne and Katie (whom I trained with this summer) Didi, Diane, Gail, Deidra, and of course Shane. 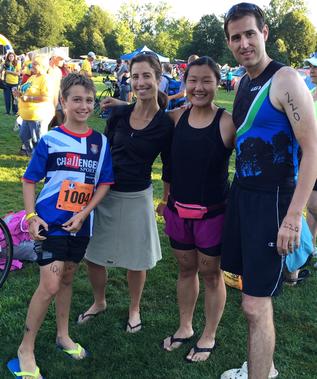 With Anne, Xander and Scott before the race.

Last year the water was glass smooth. Even with this,  I panicked, almost dropped out and flipped on my back for the entire swim. After a full year of lessons and practice, I yearned for another smooth water year. I wanted to compare my time against similar conditions a year later. This wish was not granted. It was choppy. The buoy line was being blown far inward so we'd have to try to sight more off the kayaks than the line and battle the current against us. I stood on the shore feeling gratitude to my friend Kathey (who let me swim from her dock all summer and strongly suggested that we practice in choppy water) and to Katie and Anne for practicing with me in the chop. Our 1 mile training swim was on a very rough water day - thank goodness! While chatting with a friend's relay group about the rough waters, her swimmer said,

I'm ok with the chop. I just have to handle it better than everyone else.

I could do this. I was ready! The conditions were not what I wanted, but I was not scared.I wandered and chatted as I waited. Instead of the usual butterflies, I felt happy and my friend Michael joked that I was working the crowd really well. Soon it was time to warm-up. During my warm-up I promptly crashed into my friend John and we had a good laugh. I'd get the bumping into people out of the way before the swim!!

As I stood in my corral, I talked with my friend Laura Voorhees. She loves the water and has a wonderful way of helping make everything feel relaxed. We stood together waiting for the start. I looked over at my family and thought about how hard I'd worked this year. This was my 5th time participating and the first year they hopefully wouldn't have to ask me, "How come you started last and out to the left?" or watch me emerge from the lake panic stricken at the very end of my heat. I thought about my daughter Elizabeth and the time she'd spent as my kayaker all of July for my practice swims. And then there was my son Xander who would be entering the lake in just over an hour for the youth version of the CLT.  Then, there were all the friends I met along the way during this journey. Everyone has a story and each person has a different challenge. I would channel Shane's positive energy during this swim and focus on the "opportunity" if I encountered any adversity. 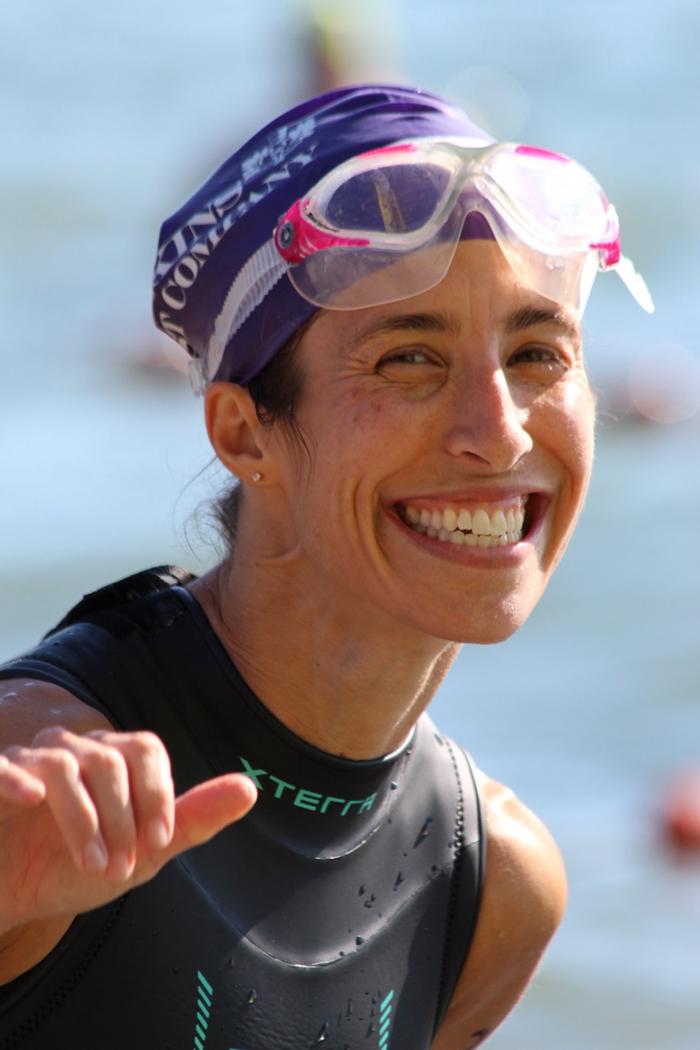 Ready for the swim. Photo by Ed Dawson

The horn blared and we were off. I settled into my groove a little slower than I hoped, catching a couple of mouthfuls of water early on. I quickly adjusted my breathing (thanks Shane for teaching us how to adjust breathing for conditions) and settled into a routine. I wanted to count the buoys as they went by but couldn't concentrate on anything more than 1, 2, 3 in my head. Soon we arrived at the green buoy (ok not that soon) and I was still in the fray!! 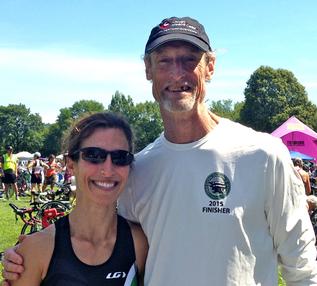 Usually I'm swimming virtually alone by the time I'm halfway to the green turnaround buoy. As we rounded the bend I knew the way home would be sweet! I worked on speeding up and trying to pass the ladies I was near as the current was in our favor. It was work to stay close to the line because the water was pushing us toward shore, but I managed pretty well. As I got close to shore I heard horn for the last wave go off. I was SO angry. That meant 20 minutes had passed and I wasn't at the shore yet. In my heart I knew I probably wasn't going to hit 20 but some of our training swims were close so it was within reach. I kept swimming and emerged with a swim split of 22:38 (almost 3 minutes faster than my fastest swim time that happened to occur on a glassy water year. It was 4 minutes faster than a choppy year time). I was pretty pleased. I was 6th of the 12 people in my age group and I was 31/57 in my wave. Success!

This was the year didn't expect much from the bike. I barely rode this season and didn't even go regularly to spin classes. But, I was reasonably sure I could at least tie myself from last year based on the Tri Club's training ride/run evening.

My watch never found satellites, so I rode by feel and while this was a lovely ride, I never really got into a great groove. I didn't have a song going in my head and I forgot to get into my drops until mile 9 or 10 when my friend Lynn rode by me and reminded me (thanks Lynn).

On the training ride, whenever anyone passed me I was able to pick up their cadence for awhile but during the race this rarely happened.   My friend Steve did pass me and I picked up his cadence ever so briefly, enjoying the speed burst. I realized a couple of days later that one thing I lacked on the ride was drive. Normally I get out of the water so defeated that I want to pass anyone I can. This race day I was exhilarated because my swim wasn't terrible. I didn't know my time, but I ENJOYED it. I was still basking in that happiness for this ride instead of desire to be speedy. 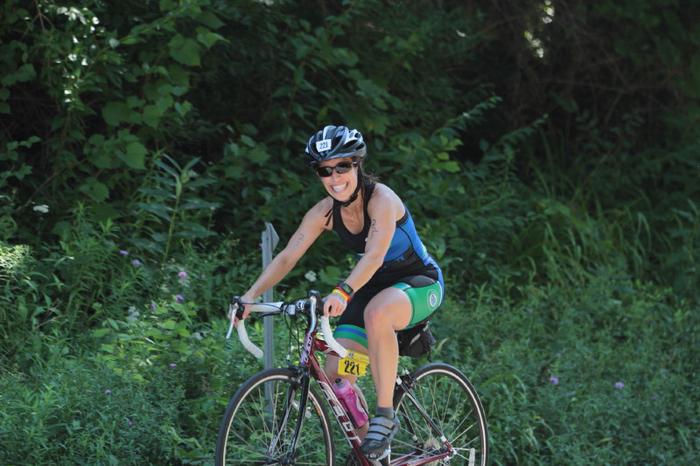 Heading up the hill just before mile 3. Photo by Stevan Knapp

My time was just under a minute slower than last year with a 51:23, 7th in age group. As Anne pointed out, the triathlon is largely a bike race. I need to master the bike because it is where you can drop many minutes off an overall time. So, next year is the year of the bike! Elizabeth is going to sign up for a relay team (she'll do the bike/run and her friend Jess is going to be their swimmer) so I'll finally upgrade my bike and give her mine. Neither one of us can wait!

I promised myself during the training evening that I would focus solely on running as fast as I could. No shouting, "you got this!" or "you can do it" or smiling for photos. And guess what? I co forgot about this as I started to run.

First, my watch worked - yay! But, as I ran I thanked the volunteers at the top of the stairs, and cheered on every person that I knew and many that I didn't know along the course. I shouted thank you to volunteers and gave big smiles to everyone. My friend DiDi from swim class was out on the course taking pictures of me (thanks Didi) so of course I smiled whenever I saw her.  I even scared a guy running behind Shane as I shouted encouragement to Shane.

It was only when I ran by friends Christina and Melissa cheering them both on, I saw that they were both in a zone. I don't even think that Melissa saw me. "Oh my goodness! I was going to focus and run as hard as I can. I promised myself I would tune out the world!" By then it was too late. I was at mile 4 and having so much fun! As I neared the finish line I caught up to someone and shouted "we're almost there!" before sprinting in toward the finish. My official run time was exactly 5 seconds slower than last year. I was 7th in my age group with a 26:09. 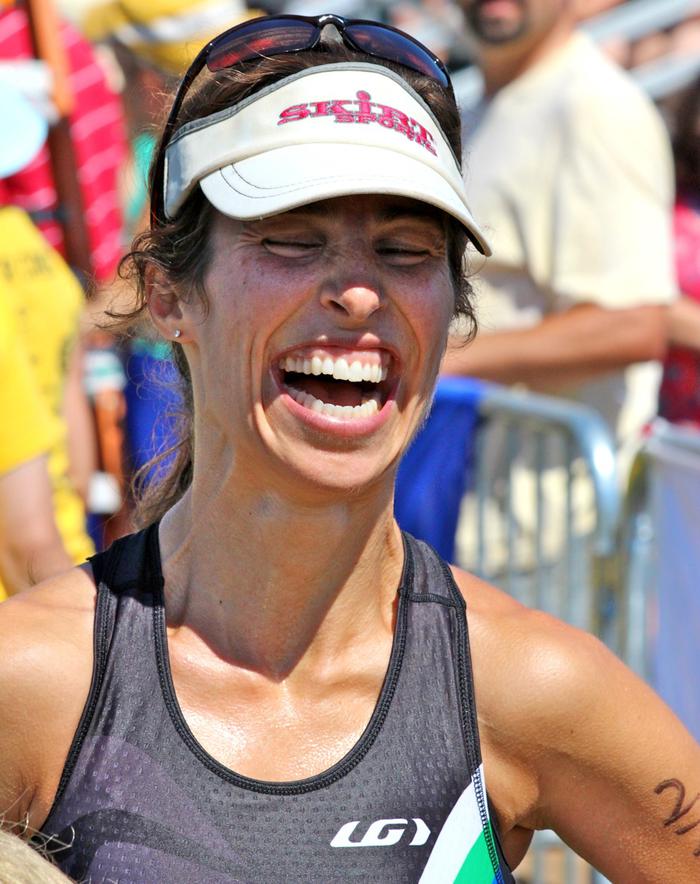 The joy of finishing! Photo by Ed Dawson

Another Year in the Books 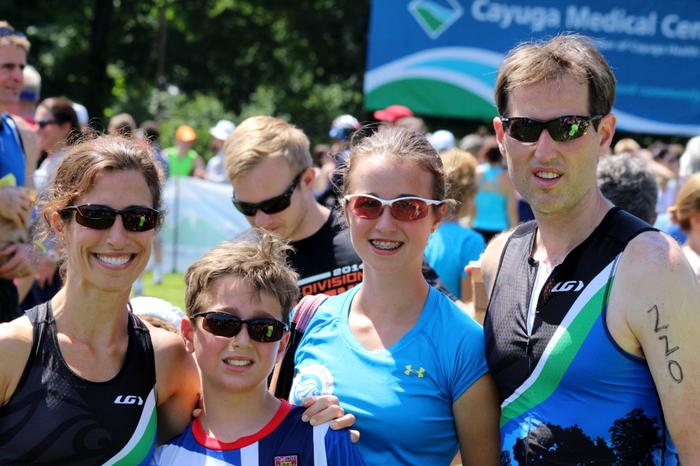 With Scott, Elizabeth and Xander after the race

I crossed the finish line to my family cheering for me! I got my finisher water bottle and it was time to celebrate. We enjoyed our post race Wings of Life salad wrap (this really made my day. My favorite salad here at the CLT for lunch!) and our post race beer from Ithaca Beer. The boys had to head home as soon as Xander finished to get into town for the last performance of The Music Man with local theatre company; Encore Players. Elizabeth and I had signed up to sweep the run course (they didn't end up needing us) so we stuck around socializing.

Thanks and Next Year

Thank you to the many volunteers that make this fantastic event possible! It was a beautifully organized event from start to finish. Race Directors Alex and Shawn do a fantastic job of leading this event.

It is the 5th year Scott and I have participated (first in 2008, then a big gap and we've done it the past 4 years). Ironically what I most love about it now is what made me too afraid to sign up again after that first year; knowing so many people there! When we first started we really weren't athletic at all. I was afraid that people would make fun of me and think I was an impostor triathlete. In the several years that followed, I began to understand that everyone has a story and no one is an impostor triathlete. We all do our best, train to the best of our time/ability and show up and have a good time. Some people will win, some will be near the back of the pack, and everyone grows from the experience. In many ways it feels like the New Year to me; a day of resolutions and the feeling that anything is possible. If you are considering a triathlon, definitely check this one out.

Next year I'd like to sign up for the intermediate distance. My friend Michael, who is a wonderfully supportive person, told me that he was positive I could do it. He did remind me to sign up for what I thought I could reasonably train for. Luckily I have until December 1st until sign-ups open for next year!!

If you participated in the Cayuga Lake Triathlon, I'd love to read your story. Add a comment with your race report link!!

This was a 2 minute PR for me so I was pretty happy. A lot of it was the faster swim (yay) and the rest was my transition time being slightly faster than last year since both the bike and run were slower.