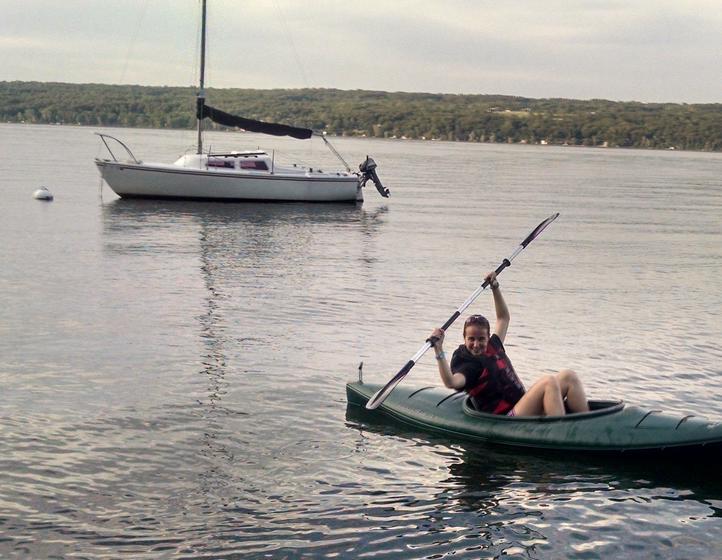 The CLT is fast approaching, and Anne, Katie and I found a night for our first group swim. We met at my house and then we drove down to Kathey's to give it a go. I've been alternately dreading and looking forward to this. I've had several successful solo lake swims, but something about swimming with other people makes this feel different. But,  I've shared a lane with Anne many times in class as well as in the Tri for the Y and I've seen Katie swim (she is the amazing level 3 swimmer I blogged about when I was in level 1) and met her before. I was excited to try this out!! My daughter, Elizabeth, was set to be our kayak escort. She's been kayaking for me all summer and loving it. This particular day she spent a full day in golf camp followed by BodyPump with me, after which we enjoyed a packed dinner in the car before heading to the lake.

We arrived at Kathey's to find her dog Finn barking outside. Finn is a very sweet dog who doesn't really bark much at people, but he barks at us every time we are around. Kathey jokes that he can tell we aren't dog people. And, since our first reaction to him barking was to call Kathey to let her know we'd arrived (before stepping out of the car), I'd say she's pretty much spot on.

We hopped out, exchanged pleasantries and headed down to the lake. It was 80 degrees outside, slightly muggy and the lake water was like glass. A PERFECT evening to swim.

While Elizabeth got her kayak all situated we donned our wetsuits. Anne was wearing glide for the first time because she chafed the last time she swam, Katie was putting on her glide and I (having not chafed yet) skipped the glide and hopped right into my suit. I set my tempo trainer for 130 and started down the ladder to get my goggles wet. I looked down into the crystal clear water and saw a FISH. He was happily swimming near the ladder and seemed comfortable. A minute or so later I decided I'd be jumping off the dock instead of climbing down the ladder. Life in the water is one of my big lake fears (more snakes than fish actually) so jumping in away from the fish seemed safer. Ultimately I was too chicken to jump in and ended up easing myself down slowly into the chilly water.

We pointed out our destination to Anne and Katie and we were off. I started a little bit ahead of them because once I was in the water I didn't really know what to do with myself. Treading water is not a strong skill of mine and I was in the sleeveless wetsuit which is a bunch less buoyant than the one with sleeves. Soon Elizabeth shouted for me to wait up so I did, and then after that we all swam near each other for awhile. It was SO nice to be in calm water and this felt fun and easy. The area under my right arm was chafing a bit, so I made a note to self to use glide next time. Soon, however, my goggles fogged up so badly I couldn't see well enough to even sight off the kayak. I stopped on the back of the kayak and wiped them out and then we headed back out. When we started again we were right next to each other. My friend Michael told me to practice being super close. He is a very strong swimmer and he said that sometimes the close proximity during a triathlon still makes him a little anxious. I enjoyed swimming tightly for the opportunity to practice being comfortable with it. It wasn't so scary being with people I know whom I know are just as nervous as me. I felt some comfort in that it was the first group swim for all of us.

Soon we were spread out again, going various directions though mostly forward. This was the farthest I've ever been from the kayak (all of my swims have just been one kayak on one person so I was literally right next to it) and I really enjoyed being farther away. Somehow it made it more real; I couldn't just climb onto the boat if I freaked out. Also, I was far enough away that I'd have to choose to swim over to it if I felt panicked, ultimately wasting energy for the real swim.

The Green Roof & the Water Trampoline

We swim to the 2nd building with the green roof. I'm always SO happy to see that building. We arrived, Anne checked her watch and gave a time update and we were off. The swim back was equally uneventful and enjoyable. I got into a really comfortable groove using most of my energy to focus on kicking without breaking the surface. I also worked on my poise point and trying to use gravity to my advantage. It was really fun to have all of the Total Immersion Swim knowledge and imprinting to rely on. Many times I found myself thinking of techniques we'd practiced in Shane Eversfield Total Immersion. On our way down when I was slightly freaking out about our paces compared to each other, Katie pointed out that we all swam with the same method so that made us compatible.

Soon I allowed myself to look in the distance and saw I was getting close to the water trampoline. This is the last landmark before Kathey's dock; the point in the swim when you know you are almost done! 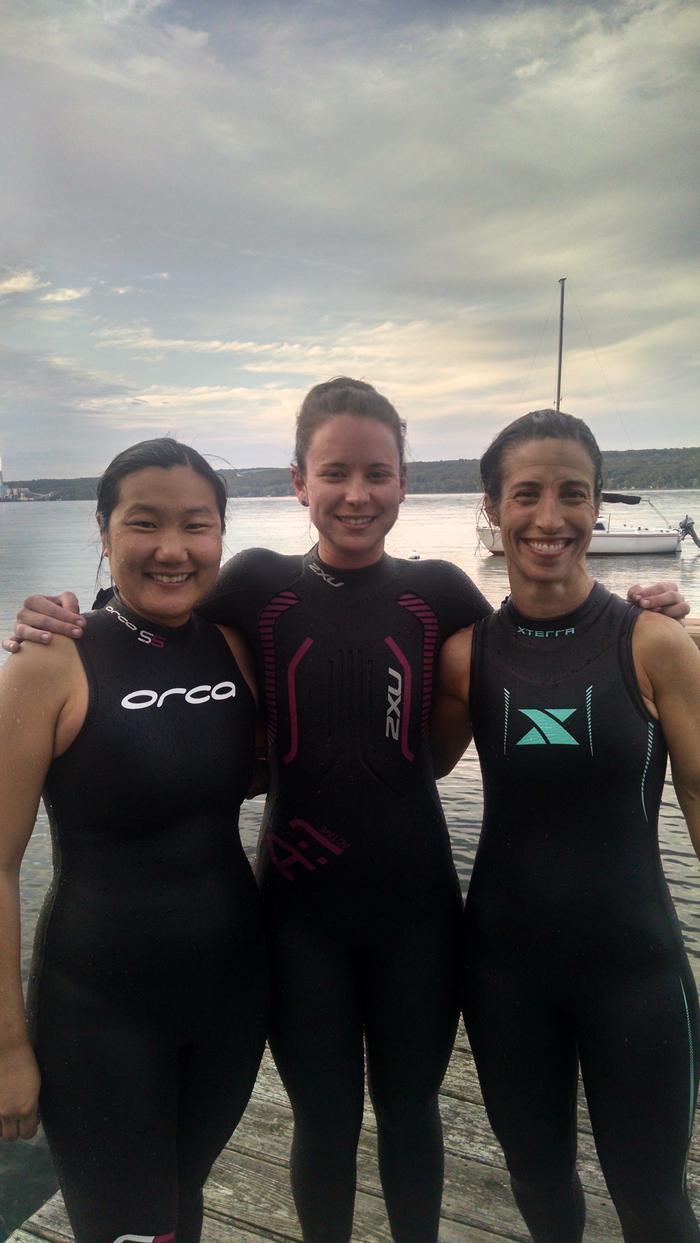 Anne, Katie and me after our swim

When's the Next One?

We finished as 3 happy campers. On the way down we joked that it was A LOT of work to get ready to swim for about 20 minutes. When we were finished we were discussing the idea of swimming a mile. Anne is doing the Women's Swimmin' for Hospicare in a few weeks and Katie is signed up for the Olympic Distance of the CLT. I'm SO happy that we had this great 1st group swim and can't wait to get another one under our belts!