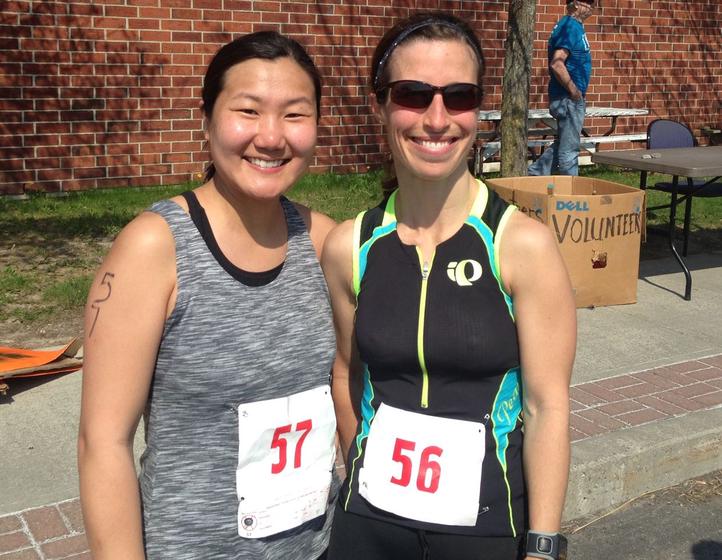 The last time I did the Tri for the Y Elizabeth was 7 years ago. It was 39 degrees and rainy. The kids were little, and Scott's dad came to watch them in the morning as we groggily at our breakfast before heading out to the event. An event of this distance was a HUGE deal. I didn't know how to swim at all, owned a mountain bike, and was a completely novice runner.

I've grown a lot as an athlete since then, but I still struggle with swimming. So this time, the event was all about the swim. I've been taking Total Immersion swim lessons from TI Master Coach Shane Eversfield since September. I am signed up for the Cayuga Lake Triathlon again this summer, and I needed to see if I could be in an event situation and not panic. Last year, I made it to the 1st or 2nd buoy, completely panicked and did the back stroke the rest of the way.

This weekend was crazy! It was the culmination of months of work as co-director of the 5th annual May Day 5&5 in Trumansburg. The race went off beautifully, and then our family promptly switched gears for Xander's special concert with the Cayuga Chamber Orchestra at Ithaca College that evening. We arrived home just before 10:30. I was utterly exhausted and practically passed out in bed after telling Scott I thought 4:30 a.m. was a reasonable alarm time.

At 1:30 a.m. I woke up and started getting dressed. I turned on the lights in the bedroom, bathroom and closed and started scrambling to get my things together (I hadn't even sorted out clothing the night before I had been so tired). Scott said, "What are you doing? It is 1:30!" and soon I was back in bed. When the alarm actually went off at 4:30, I seriously considered skipping the race because I was so tired. The only reason I went? I had friends participating that would wonder what happened to me.

I had a wonderful drive in, looking at the glorious sunrise over the lake while listening to my Flower City Half playlist in the car. I saw friends Michael and Brenda as soon as I arrived and we walked in together. Shortly after I checked in, I met up with my swim friends, Diane and Anne and we talked about our race. 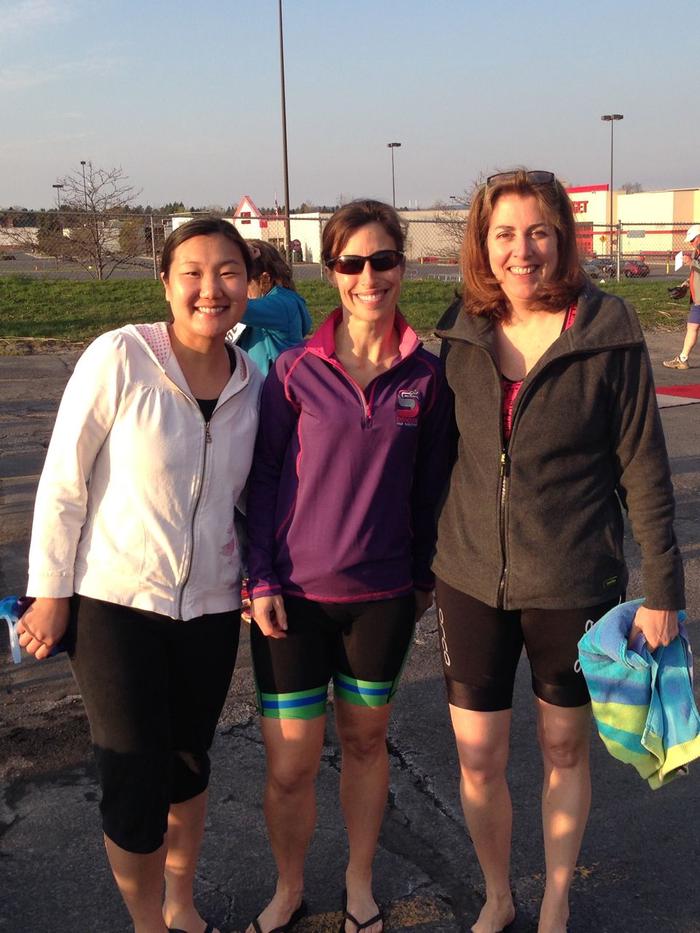 With Anne (left) and Diane (right) before the event

I was put into heat 5 (of 8). This race is organized from slower to faster based on your overall finish time prediction (with the relay folks going in the early heats so not truly slower to faster). I predicted at total time of 2 hours, with a 10 minute time for my swim. I was pleasantly surprised to learn that I was put in the same heat as my friend Anne. I met Anne in swim class in September, and she and I have been in class with Shane all year now!

I decided to use the [tempo trainer](<a%20href="http://www.amazon.com/gp/product/B005TVYVI2/ref=as_li_tl?ie=UTF8&camp=1789&creative=390957&creativeASIN=B005TVYVI2&linkCode=as2&tag=lunchtaker-20&linkId=KYL3HO7KJWHYMB6C">Tempo Trainer Pro set at 126 to help me keep my head calm. I was worried, because the trainer can make me go either way. Sometimes it is calming and other times it is stress inducing. Today it proved calming. And, the lane was wide. When we started swimming it felt like Anne was in another zip code. My biggest worry always is being last, getting kicked out of the pool, or totally panicking in the water. Talking with Michael Boggs before the race was helpful; we laughed that really we care so much about how fast we are relative to others, but no one else cares if we are last. No one is looking at someone thinking, "she sucks" or "what a bad swimmer." People are kinder than that. This conversation helped me stay focused on the end game: a solid swim for me.

I jumped out of the pool with a time of 10:08. This was exactly the time that Shane predicted I'd get in our last class. I shared that my biggest worry was getting kicked out of the pool for being too slow (they give you 15 minutes). He smiled and said that if I swam the way I'd been swimming I'd swim the 400 in 10 minutes. He was right!

After a short transition it was time for the bike. This was rather uneventful. I headed up the hill and caught up with Anne. I wished her well and kept riding. This course is totally unfamiliar to me. I live about a half hour away, and do all of my biking from my house. I hadn't looked at the course map until right before the race, and don't know the roads enough to have the map mean much. I was relying on the people on the corners to help me turn the right way. This was a BAD choice.

About 5 and a half or 6 miles in, I reached a corner and was pleasantly surprised to see a volunteer there (several corners had been unstaffed with just signs telling us which direction to go). I started to say my usual, "thank you for volunteering" when I realized she was a participant. I asked if she was ok because she was stopped and she said, "small bladder." She was partially blocking the sign, and I looked quickly thinking that the sign was an arrow to the right. A half mile later I hit a main road. No sign. No person. I was LOST. I stopped my bike and got out my map and used it to get turned around. I was grumbling at myself the whole way thinking, "but my bike was going so well!" I realized it was like Elizabeth's untied shoe in the half marathon last week. There was nothing to do but accept it happened. I got lost, used my resources to get turned around and would have to live with the fact that I biked an extra mile. Soon I was back on course, and awhile later I passed by the same people I had passed earlier.

I spent the rest of the bike ride trying to hit an average pace of 15 mph. I hadn't stopped my watch for the map time, and I knew the results would be cruddy but I'd be happy if my gps said 15.0 mph. I did hit this goal so all was good.

I ate some sport beans and headed out, only to hit the end of the transition and notice that I didn't take my cycling jersey off. It was getting really hot by this point and two layers for the run would be completely ridiculous. I ran back and dropped the jersey. The announcer joked about it, and I was embarrassed and frazzled heading into the run. The run started uneventful enough. I ran along and saw the left turn arrow a little way into the course. (I hadn't actually looked at the run course map. I have been running the route regularly when Elizabeth is at dance in the area ... or I thought I had been). As soon as I turned left, I was supposed to get on a path. I didn't see the arrow on the mouth of the path and kept going up the hill on the road. Luckily, Anne was behind me with a couple runners and they called to let me know I was going the wrong way. I doubled back, adding .4 miles to my run for the day. Grrr. Once I hit the top of the hill, I set a goal  for the run. I wanted to have my watch read sub 9 for the distance I ran.

Again, the run was rather uneventful. It wasn't especially challenging. It was great fun to watch the fast bikers from the last heat zoom by me though! My friend Ofer came in 2nd for the whole race and our friend Tommy (age 14)  that Elizabeth ski races with came in 10th over all! Amazing to watch these guys race.

"This is a fun way to spend a morning." That is the phrase that kept going through my head on this run. I had many friends in the race, and it was just so fun to be around everyone getting a great workout in to start the day. The swim was good for me, and while it is humbling to be so much slower than many others, it is also truly AMAZING how far I've come with my swimming. I was comfortable, and I could have kept swimming as long as needed. It was a sustainable pace and it wasn't unpleasant. I can't thank Shane enough for the time he's spent with me, but also for all the little things he's taught to help us approach things.

I was also really excited to see my swim classmates and to share a lane with Anne and see her several times on course. It was her first tri ever and she had an amazing race! Here is her full race report.

After the race, I went for a hike with Elizabeth. I was excitedly telling her that when I got stressed in the swim I'd start to channel Shane thinking, "I don't care, I don't care" and she said, "whatever works for you" in a way that implied that she thought I was crazy. I realized she hadn't experienced the swim training with me, and without the experience the phrase meant nothing. I said, "you would have had to take the class to understand." She smiled.