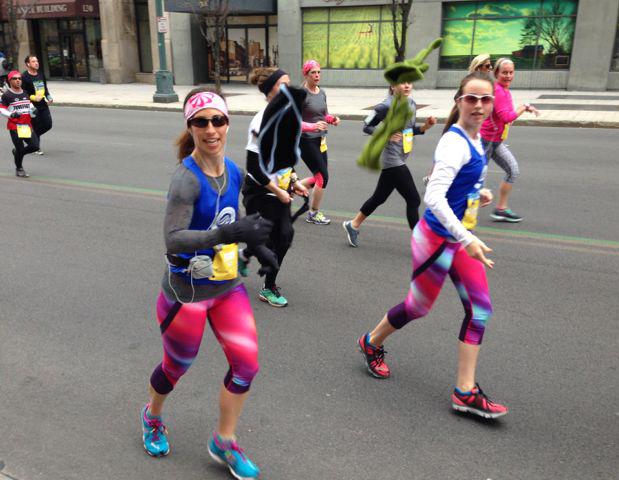 Elizabeth and I signed up for the Flower City Challenge in January. She was in the midst of ski race season and it sounded totally feasible for her to be well trained by April. After ski racing ended she launched right into dance competition season. She ended up logging a decent number of miles, but not as many as fall when she was training for Philly. Still, things were clicking right along for her until the week before when she had her first truly terrible run. One week until race day and she considered pulling out of the race, and dropping down to the 5K instead of the 5 mile in the upcoming May Day 5&5. I told her it was too early to worry about that, and that bad runs happen. Just get through it and move forward. She did and pretty soon it was time to head up to the race! 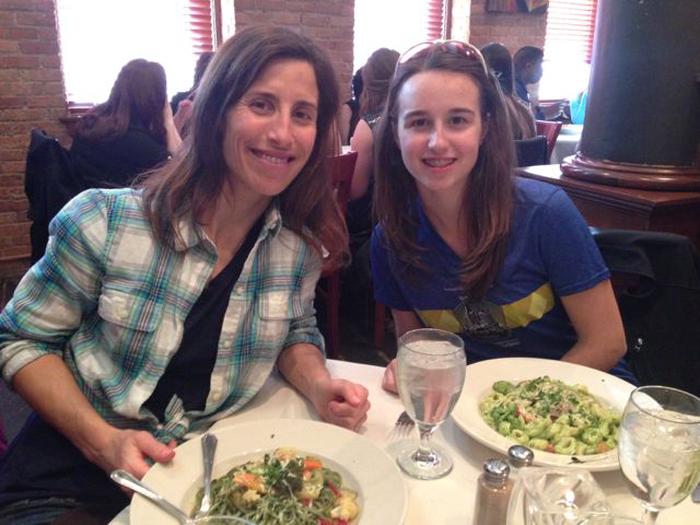 The boys came with us for this race. Our hotel had a pool for Xander and we were just blocks from the start line. We arrived just in time to grab our packets before Fleet Feet closed and headed to check into the Hyatt. The gentleman at the desk recommended a nice Italian restaurant near our hotel called Pane Vino. We didn't think to ask if you needed reservations or needed to dress nicely. We were very casually dressed! Upon arrival, the hostess said she could fit us in toward the back of the restaurant. We literally had our very own little space, almost like our own dining room. The people who had reserved the table had recently cancelled, so it was ours. We enjoyed fantastic pasta which we decided to consider a double celebration; "pre-race meal" and "report card celebration" for the kids.

... And our famous pre-race bagel faces

We woke at 5:45 and had our usual pre-race carpet picnic of bagel faces! Scott prepared our bagels with peanut butter and raisin faces and we watched the NBC Nightly News podcast from the prior evening. Then we put on our matching outfits with a Finger Lakes Running and Triathlon Company shirt given to Elizabeth by our friend Melissa. She was an ambassador with me last year, but is now running exclusively for Skechers and Injinji toe socks. Scott snapped a picture of us before we left the hotel. 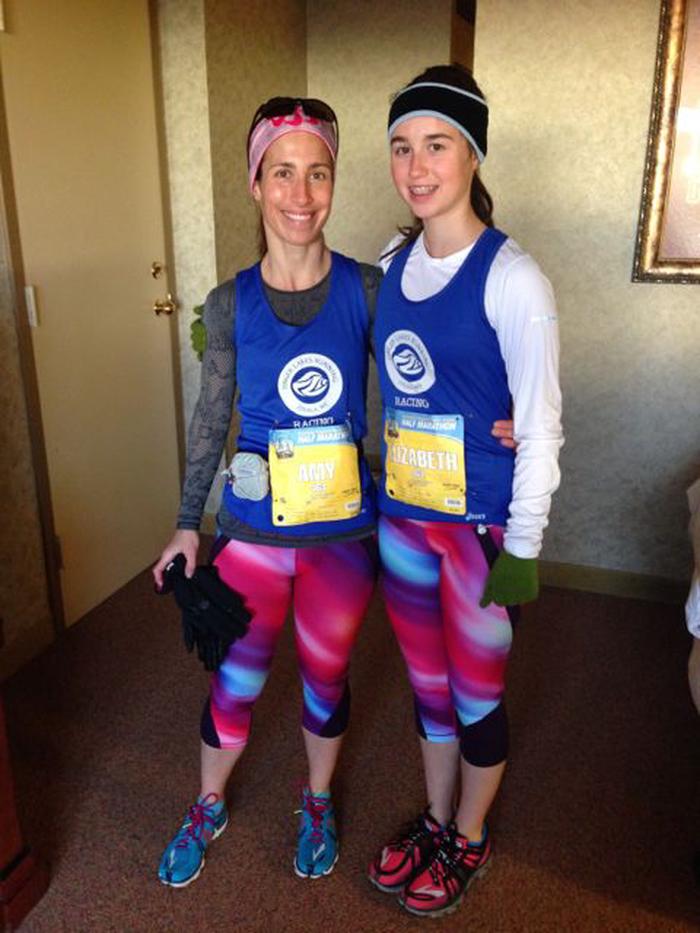 We knew 4 people that were also running the Flower City Challenge (and later would learn of more when scanning the results) so our goal was to find them all. Within the first 10 minutes of our arrival we ran into my High School friend Mary! About 1.5 miles into the race we saw Brenna, and after the race we caught up with Melissa and her husband Walter. We didn't find Lisa, one of our friends from Bristol Mountain Race Club, but did get to see her race pictures later on Facebook. They all had wonderful races! 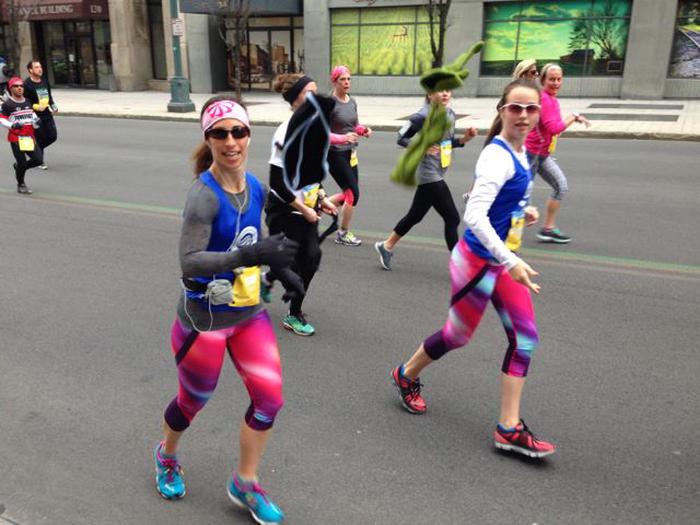 This is my 2nd time pacing Elizabeth. It was my 2nd time on a course that I knew and I enjoyed every minute of it. We both ran with music, but kept it low enough to talk. I was also interested in monitoring her breathing for signs that she was struggling.

At mile 1.5, Elizabeth had to stop to tie her shoe. I was struck by how calm she was about this. I would have fretted and whined about losing a minute or more to shoe tying, but she just rolled with it. At mile 2 we ran by our hotel and saw Scott and Xander cheering for us. Elizabeth tossed her ear band and gloves to them. She wondered why I didn't do the same. I wondered how she could even consider tossing them!

Around mile 5 I could tell that she was starting to struggle. I asked her if she wanted to slow the pace or if she was ok. She said she had a cramp and she'd like to slow down. We had agreed that she would set pace and I would follow. We slowed down and her cramp slowly left. I had warned her that when we turned off Park Ave there would be a hill. She would need to keep her head in a positive space and attack the hill. Then the hill didn't come. My memory was flawed and the hill wasn't for another 1.5 miles!

Soon the hill arrived and she powered through. The part through Highland Park feels like one never ending hill. It was about this time that I felt a tiny bit sad (and also extremely happy) that I was pacing instead of going for a PR. I was enjoying this. I was able to encourage her up the hills, chat with her and motivate people around me. It was fun to take in everything around me instead of pushing so hard to run fast.

When push comes to shove

One thing that I love about running with Elizabeth is that she really rises to the challenge of the day. She is strong and courageous and she is eager to learn from my experience. I feel like we are a solid team when we run together. Hard right up ahead? I motion with my hands to get right or warn her and we both head to cut off the tangent. Water stop? A quick ask of "do you want water" and she knows exactly what she needs. She doesn't want to know pace, but every now and then I let her know just so she knows what a certain pace feels like. Her training run a week ago was challenging because of a major hill, yet today's hill was much more challenging and she conquered it. I was so proud of her!

Lessons from running with a novice runner

Today was about finishing. She ran Philly at just over 2 hours. Of course Scott and I hoped she could beat that time. She knew this course was tougher and that she wasn't as well trained. She went into the run with a full heart and a goal of having fun and finishing strong. It was her real goal; she didn't have a secret desire to break two hours. I found it so refreshing to run with her for this reason. I know there will come a time in her running that a PR means the world to her and when an untied shoelace is a real bummer, but now she is able to enjoy every moment and have fun.

She's running the Wineglass Half this fall - solo. It will be her first time lining up alone at a big race and her first time pacing herself on the course. I think she's ready and excited for the opportunity and I have a feeling that she'll also be ready to go for a PR on that great course!

And the race signs!

No race report of mine would be complete without the race signs! We had so many bust out loud laughing times on the course and such great support from people. Some of our memories were: