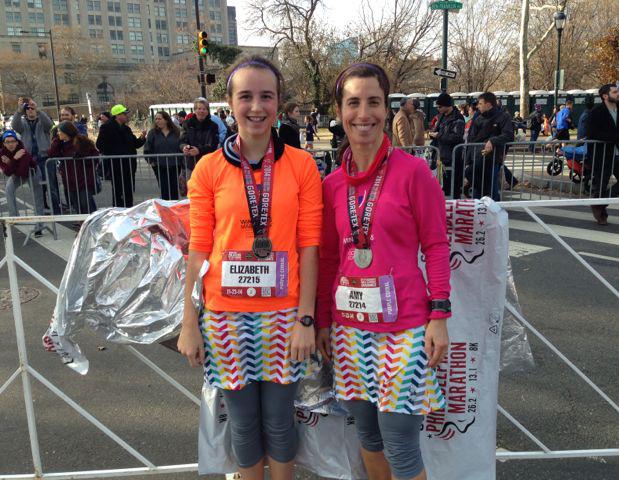 This was Elizabeth's very first half marathon! She looked at several training plans, and talked with Scott and me about how to manage cross-country, dancing and half marathon training, and then she wrote up her Philly training plan. She hung a copy in the hallway outside her bedroom and followed it quite religiously right up until race day.

I was recovering from an injury that happened two days after the Wineglass Half Marathon and I knew that Elizabeth was getting worried. We'd signed up to run together, and had to get a doctor's note to allow her to run because she was under 14 (the minimum age to register). We planned to run every step together (even though we never ran a step together in training). Not normally the best with handling injuries, I did stop running and scheduled an appointment 3 weeks from race day. The doctor asked me how important it was for me to run the race, and I answered emphatically, "I must run it!" He began the examination, and everything was already on the mend (I had taken 2 weeks off from running by this point) so he instructed me to add mileage gradually and be careful. If I was still injured after the race I could come back in to see him. It was smart to take the break as I had a full recovery in time for the run. Elizabeth could relax knowing I'd be right there next to her. 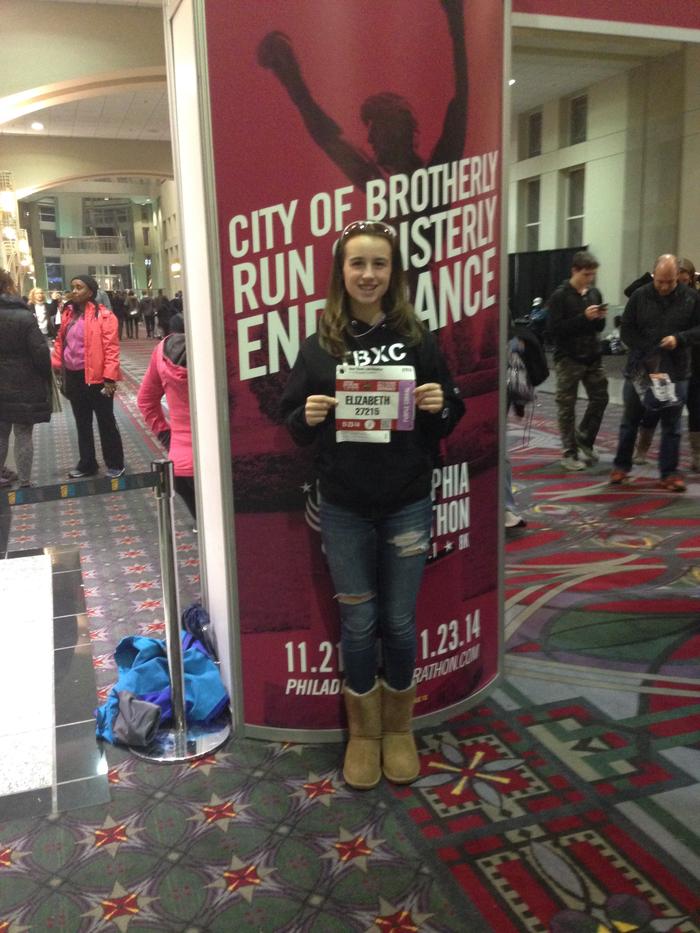 We drove down to Philadelphia together. My sister planned to come run with us, but she had come to help my parents while my Mom recovered from shoulder surgery. When the day arrived, she felt she really needed to stay and help my Mom and Dad, as it was the last 2 days of her trip. We said goodbye to Sarah and "our boys" - Scott and Xander were staying back with some amazing Cornell hockey tickets courtesy of our friends, Chantelle and Rob, who were also running Philly.

Packet pick-up was entertaining. I ran the full marathon last year with my friend Jenny. It was my first BIG marathon, and I was so impressed and overwhelmed with everything. This year, after being at the NYC marathon expo with Scott, Philly looked calm and relaxed and much smaller in comparison. Many of the same vendors from NYC were there, including the same person we had spoken to selling The Stick product. We perused the booths, getting samples and enjoying the displays. Pretty soon we were on our way to our hotel. Ironically, we selected this hotel because it had a lovely pool that we knew Xander would enjoy, but we ended up loving it because of the super awesome beds, but we didn't venture near the pool. 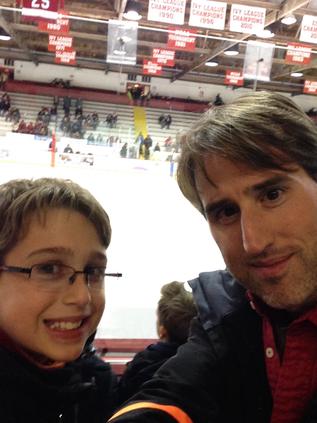 When the boys and Sarah had planned to come with us, we decided we'd do take out pizza and pasta by the pool. Now it was just two of us, and it was too late to join Chantelle and Rob's reservation at La Scala's, the place we dined as a group last year. We saw an Italian place, Positano Coast, right near our hotel, and called them. Hostess Victoria said if we came right over she'd hold us a table, and asked our name. When we arrived, the hostess asked if we had a reservation. I gave our name and said we spoke with Victoria. She shook her head back and forth saying, "that girl ..." and two other staff came to the desk. It turned out that one of them was Victoria and she sweetly walked us to our reserved table. Elizabeth and I had a delightful dinner of homemade ravioli and stir-fried broccoli rabe while the boys texted us pictures from their awesome hockey seats. We texted Chantelle and Rob to let them know we had arrived and found dining, too.

Soon it was time to head back to the hotel and prepare for our 4 a.m. wakeup time. We readied ourselves with our pre-race gear and hopped into our respective beds for reading and relaxing. We set two alarms 15 minutes apart, and rose at 4:15 a.m. to enjoy our carpet picnic of peanut butter bagels and cherry juice. Before long we were heading to the public transportation in our Salvation Army bathrobes and our matching race outfits. After a couple of blocks of walking, we ran down the stairs to the train. The train was arriving, and before we could figure out how to use our tokens another runner opened the gate to let us in. 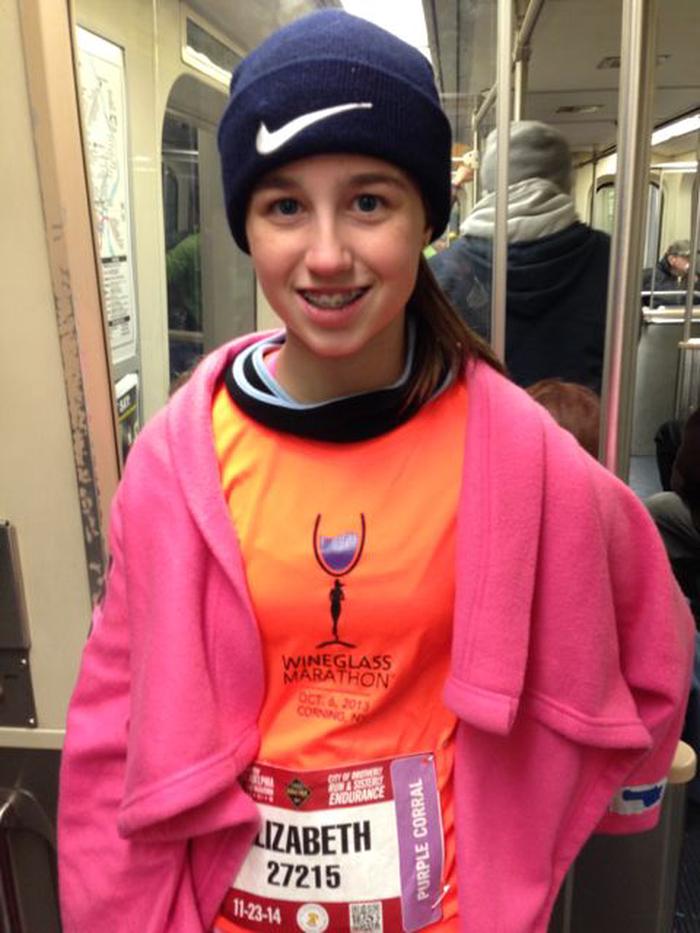 On the morning train

After disembarking from the train, we joined the sea of runners walking to the start. We sauntered as it was only 5:30 a.m. I knew from last year that it would be easy and fast to get through security, but also that Elizabeth felt better getting there plenty early just in case. Porta potty lines were pretty short at that hour, so we were ready and killing time by 6 a.m. We enjoyed sitting and chatting in our corral, met a couple from the Rochester, NY area and told them about the course. We wandered to try to find Chantelle and Rob, but had no luck. 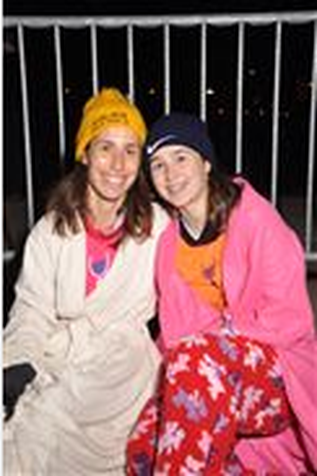 We discarded our bathrobes in our corral about 15 minutes before the start, and began listening to the pre-race announcements. Before long we were freezing and ready to run! They released our corral and we were off. Elizabeth and I had agreed to a "don't ask, don't tell" protocol for pace. If she wanted to know our pace, she'd ask me. Otherwise, I'd stay quiet. Her goal was to hit 10 minute miles and enjoy the race.

We settled into a very comfy stride about a half mile into the race. It was hard to believe we hadn't run a step together except the one family shakeout run the day before. We both had our music on and just chatted the briefest of times. I hadn't planned to run with music, but the crowds weren't nearly as dense as I remembered from the prior year, so I figured I'd enjoy some music.

We averaged an 8:59 pace for the first 3 miles and then fluctuated a bit, but stayed pretty speedy. We settled into a routine of stopping at every other water stop, looking at the signs and spectators along the way. Some of the signs we remember include; "You run better than the government" and "It's all about that pace, 'bout the pace" followed by "Run hard, brunch later" and "Any idiot can run but it takes a special idiot to run a marathon!" and of course, "pain is temporary, pride is forever."

Around mile 4 we had a gentleman running behind us shout, "are you sisters?" which made me smile. We giggled and I said, "No we're a mother-daughter team and this is Elizabeth's first half marathon!!" He said, "Awesome! Now go run, don't let me slow you down!" When we stopped at our 2nd or 3rd water stop one of the volunteers cheered for us using our names from our bibs. He said, "Go Elizabeth, you've got this!" and "Go Amy, you can do it!" several times. It was SO great to have the encouragement from the volunteers. I could feel Elizabeth perk up and realize the great importance of volunteers. She's been on the volunteer side so many times, but hasn't been in a longer race on the runner side.

Just as I was starting to think, "I wonder if she's ever going to want to know our pace?" she asked me. Mile 9. Wow, she made it 9 miles without asking. I was rather impressed as I had to fight the urge to break our deal and tell her MANY, MANY times. We were on track to come in dangerously close to a sub 2-hour half marathon. Soon the rolling hills started and I knew the big hill was coming. Last year in the full marathon I had a little temper fit when I hit that hill, so I was worried about Elizabeth. She had trained doing loops in town, avoiding the country roads for fear of crossing highways and of course hills. As we started I reminded her to use her arms and focus on equal effort, not equal pace. She powered up the hill like it wasn't even there. It was only later that she confided that she considered asking me to walk. At mile 10 I couldn't keep my mouth shut and had to tell her that if she sped up just a little bit we'd hit a sub 2-hour half marathon. I told her to let me know if she wanted me to pace for that. She said she would let me know. I didn't say another word, which took great restraint!! Our last 3 miles were the most boring of the course. They ran along a highway near the river and, while beautiful, they felt uninspiring. I didn't know at the time, but she was really struggling here. She put a great face on though, and while she ultimately didn't shoot for the sub 2, we ended up with a 2:01:57, not bad for a first half marathon! 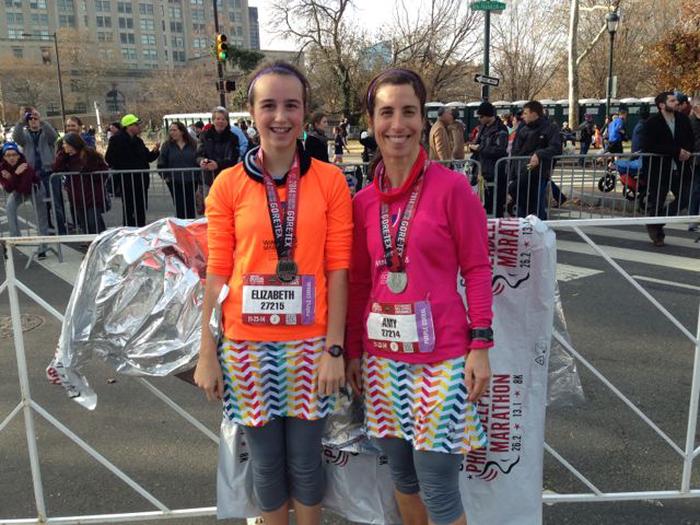 This race report wouldn't be complete without mentioning post-race stories! We wandered through the chute and decided not to wait in the line for the food. After all, we were eager to get back to our hotel and begin our journey home. We hadn't found our friends, and we were starting to get chilly. As we were walking along, Elizabeth recognized Chantelle from the back of her ponytail! We ended up getting food after all and Chantelle took our picture before the 3 of us began walking back toward the hotel (Rob was doing the full marathon, so Chantelle had time to clean up before his finish). Also, remember the runner who opened our gate for us in the morning? Now we had souvenir tokens! We decided to save them and hang them with our bibs on the wall and walk the 2+ miles back to the hotel with our great post race blankets wrapped around us. Upon reaching the hotel, we changed quickly and then off we went to begin our 4+ hour drive home. We stopped at the same gas station I'd stopped at with Jenny the year prior and got the same food; salt and vinegar potato chips and coffee drinks from Starbucks. It was so fun reliving every moment from the race together on the way home!

This was a FANTASTIC first half marathon experience for Elizabeth.