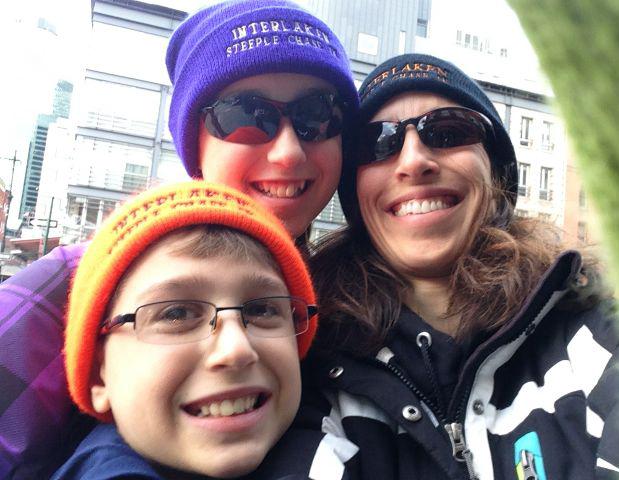 There was a special deal to sign up for the lottery on Black Friday. Save a few bucks and then cross your fingers and hope for the best! Scott and I hoped to do this race together, and convinced ourselves that despite the extremely low odds somehow we'd both be picked. Months later when selections were made we saw just one charge on our credit card and knew ONE of us got in. Scott drew the lucky straw! After briefly considering entering by running for a fundraising team, we decided that the kids and I would spectate.

After completing his first marathon injured in 2012, I was so happy that he'd had a really strong, injury-free training cycle. He was READY for NYC! He was really ready to have a BQ time, or close to it. A year ago, he had predicted a much slower finish time than he was trained for so he was placed in the 3:45 corral. Realizing this could affect his race, he reached out to try to change his corral. No luck. He'd have to make the best of the start time he had and work with the weather forecast: WIND!

After breezing through packet-pick-up and finding a pair of winter boots for Elizabeth at Macy's, we grabbed a subway back down to our hotel in lower Manhattan. While walking from the subway, we remembered that we planned to hit Cafe Roma, our favorite Italian bakery in Little Italy. Elizabeth and I walked the 2.5 mile round trip quickly and enjoyed the time to chat_. W_e met the boys and headed to Il Brigante,  a cute little Italian restaurant a block from our hotel. Xander had selected his meal ahead of time down to his fancy Pelligrino beverage. It is always fun to dine out with our resident "foodie" in the family. We relaxed and enjoyed a delicious meal together. We even convinced Xander to save two slices of his pizza to add to Scott's pre-race breakfast meal (everyone else got pasta). Because I always get hungry before races, I was worried that Scott's planned breakfast wasn't quite enough. The kids enjoyed a lot of laughter at my expense though. After dinner, we headed home and went right to bed. 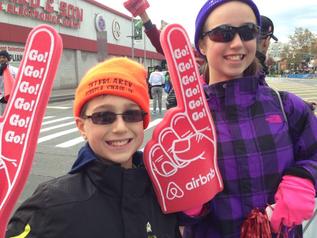 Scott headed out early and the kids and I walked 3.5 miles over to Brooklyn to watch the marathon at mile 8. We arrived just after the first wheelchairs went through, in time to see the lead pack of men and women as well as the lead hand cycles! We had a perfect spot right on the barricade, and sponsor AirBNB gave us big red foam fingers, pompoms, kazoos, and samples of food. The area was festive and fun with live music, a big screen display of the official coverage and more music from just a block down. We got comfy with our fellow spectators, helping them find who they were looking for and got video of Scott coming our way (you can see that and more details on Scott's writeup). It was GREAT fun to see him and encourage him here.

After this, we planned to take a G line up to Queens and watch him at mile 14, but we lost the 10 minutes of buffer we had trying to find the a subway station with the G line. We decided we'd skip mile 14 (where we imagined he'd still be feeling great) and head up to mile 18/20. Unfortunately, the 6 train was REALLY slow and we had to change our plans to see him at mile 22. We knew from tracking him that his goal pace was slipping, and decided he'd need us there.

The Bronx had a different feel than Brooklyn. Police tape lined the streets and spectators ignored the tape, opting to stand right in the street. Onlookers were crossing the street, playing Frogger with the runners. We found a decent spot and waited for Scott to come through. I was overzealous with my video this time, starting it 7 minutes too early. The result; no footage of Scott because of a depleted battery. He came through right after I turned off my phone. We frantically tried to get his attention but he was in the zone. He didn't see us, even as we ran down alongside the route yelling his name.

We headed down to our meeting spot 5 miles away via the marathon route, we talked about the things Scott might be feeling. Did he let his BQ time go with a full heart, or was he still going for it, hoping? Did he NEED us at mile 22 and we failed to deliver? Would he think we just went to a museum and ditched him? We looked at each gap in the police tape thinking "this would have been a better spot to stand. He would have seen us here." Our hearts were somber as our bodies were knocked about by the wind. Finally, we wondered how we'd ever cross past the runners to get to our meeting spot.

We made it to 85th street and knew it was now or never: time to play Frogger! A short gap presented itself and we dashed. Whew. Now it was onto Freddie and Peppers pizza place on 74th and Amsterdam. We were hungry. All we had eaten was our free breakfast at the hotel at 7 a.m. and our sample of cookies. We'd walked about 8 miles by this point and had at least 3 to go before reuniting with Scott. 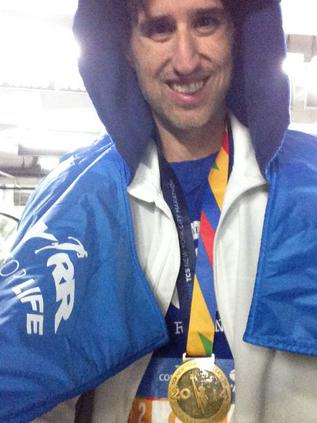 Scott in the nifty poncho.

We were almost to the pizza joint when Elizabeth got a call from Scott. He was in the medical tent recovering and would be heading out in a few minutes. We'd watched people exiting the park and knew we had some time, so we slowed our frantic pace and sauntered to the restaurant. When we arrived, one look at my kids' faces and I knew they couldn't wait for their Dad for a slice of pizza. It was 2:30 p.m. and they were exhausted and hungry. We grabbed our slices and monitored Scott's progress using the Find my iPhone app. It wasn't long before he arrived. His first words to me were, "how do you feel about driving us out of here?" Today would be my first day driving in NYC! We congratulated him, hugged and shared stories from the day and then we hopped a 3 train to our hotel.

On the way home we stopped for warm drinks at Starbucks, then headed straight to Viva for a celebratory, albeit late dinner. We heard all of Scott's stories and shared ours with him, talked about future races and chilled out in the car. We're both thinking about Black Friday this year and whether I'll put my name in the lottery. Inspired by a co-worker when I was 22 and running wasn't even part of my vocabulary, this race has always swirled in the back of my head as something to experience. But for today, I'm really grateful that I had the chance to watch him and he had such a great race!!

Read more about his race from a runner's perspective: scottpdawson.com/new-york-city-marathon