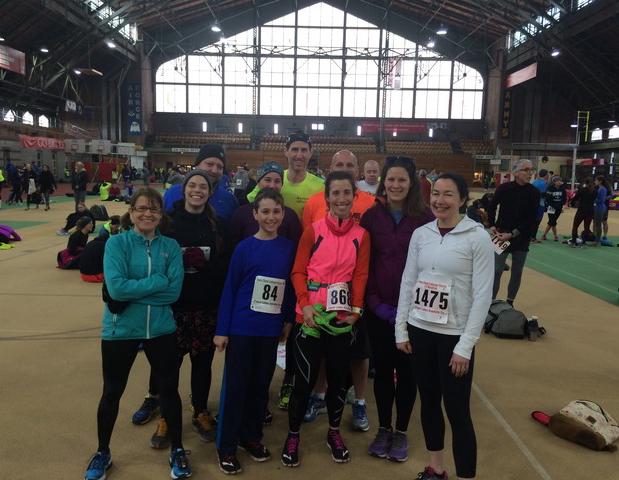 We signed up for this race way back when it opened and it just kind of crept up on us. I spent my winter with a goal of maintaining 30 running miles a week and I managed to hit this goal! There were many weeks that I brought my kids to their evening ski racing training, donned a headlamp and headed out running on the main road near the ski area. Having run the Virgil Crest Ultra relay this past fall, somehow running on a main road in the dark of evening didn't feel a bit scary! I had that memory of running at 4 am in the woods with coyotes howling in the distance to ponder as I was running along a nice level road surface.

The kids were both signed up for the 10K and Scott and I planned on the half marathon. Xander was in the same boat as last year - very little running leading up to the race. His sister was only marginally better having managed to run a bit more regularly in the few weeks leading up to the race. Last year, I pulled myself from the half marathon and ran the 10K with Xander. It was his first and he was 11 and untrained so I felt some company from mom was in order. This year at age 12 I figured he was ready to brave it solo - even if he wasn't really prepared!

My friends Jenny and Christina were planning to run this race together. I've only run one other half marathon with a friend and it just happened to be another local race last year. Jenny and I decided to run together with no time goal - we just wanted to have fun. We talked our friend Chantelle into doing the half and planned to be a foursome for this race.

Race day arrived and though it was April, we had a dose of winter hit us! Race day temperatures would be between 27 and 32 degrees. We had picked up our bibs the day before so we only had to arrive ready to run. It was freezing outside as we hurried over from the parking garage to the indoor track at Cornell. Soon we found most of our DailyMile friends and gathered for a group picture. Friends Brenda and Michael couldn't be located for the picture so it is incomplete! Luckily we saw them later though.

And then there were two

The 4 of us planned to run at a conversational pace and just have fun. Chantelle hadn't done much running at all (she is a group fitness instructor, so despite not running she exercises A LOT and is in great shape). Jenny and Christina had trained together pretty regularly, and I'd been running solo all winter. We quickly broke off into two and two and chatted about random things. Christina and I were just in front of Jenny and Chantelle so we were technically still together as a group. Around mile 2 we met up with our friend Jeff and talked with him for a few miles. As we got onto a smaller side road we were able to run as a cluster and we enjoyed catching up with each other.

Then, the water stops started and somehow Christina and I got just enough ahead of Chantelle and Jenny that it really turned into a two and two grouping. The road was a main road with room for two to run abreast along the side. Christina and I haven't run together since fall, and it was really nice to catch up with her. We've been busy planning a big race in our town - almost all by email. So, of course we found ourselves talking race talk during some of the time!

At the 2nd to last water stop we arrived at the famous Hash stop where our friends were giving out Mimosas and beer along with the usual water and Gatorade! Christina took a mimosa and I opted for Gatorade. Christina had never had a mimosa before and we had fun saying "mimosa" in goofy voices for quite some time. Jenny and Chantelle caught us at this point and we tried to wait for them. They were very happily enjoying chatting and drinking the beverages offered so we decided after waiting for a bit that we'd continue on.

As we rounded a corner before the one big hill on this course we heard and saw an ambulance coming. Of course I feared the worst - that one of my family members had collapsed on the course and was heading to the hospital. I sometimes scare myself with the thoughts that creep into my head! Christina assured me that it wasn't someone in my family and we went back to chatting. 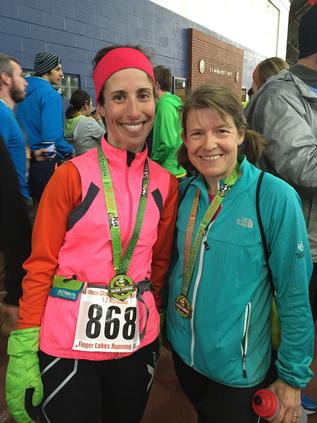 With Christina after the race

The final stretch of this race is all downhill. It is gradual and nice and Christina asked me our time. We were at 1:47 when she asked and she asked if a 2 hour time was possible. I said we couldn't quite hit that but if we sped up we realized she could get a course PR. Her old PR on this course was 2:04. We picked up our pace and just enjoyed a nice speedy clip for the last couple of miles. We came in at just over 2:01. The race didn't have a start pad (and somehow we hadn't realized that) so our time was from where we started back in the mid-pack of the crowd of runners. Just like The Gorges Half when I ran with Jenny, we had missed a 2 hour half because we weren't shooting for any specific time. It was ok though - it was my first time running the course and I enjoyed the opportunity to run without shooting for a PR. I never thought I'd like "racing" with friends but it is a really great way to spend a Sunday morning! You find that you push yourself harder than a training run of the same distance even though you aren't racing for speed.

After the race we dropped Xander off at rehearsal for Little Mermaid, a play that he's part of with the local theatre company, Running to Places. Then the 3 of us headed off to Viva! Where else? Scott won the Master's Division (and $100 to Finger Lakes Running and Triathlon Company). [Read about his race](http://I was happy to have run with friends and to have that wonderful feeling of a race morning. There's something awesome about getting up, running a race and seeing all your running friends out and about! After a not so amazing winter in central NY I am ready for a great season of running!!). Elizabeth came in 3rd in her age group of 20 and under and got $15 to FLRTC. They both had reason to celebrate!

I was happy to have run with friends and to have that wonderful feeling of a race morning. There's something awesome about getting up, running a race and seeing all your running friends out and about! After a not so amazing winter in central NY I am ready for a great season of running!! 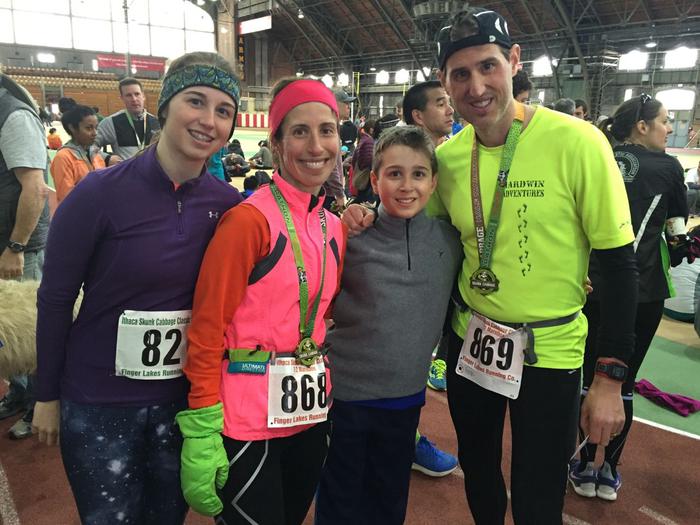 The family after the race!