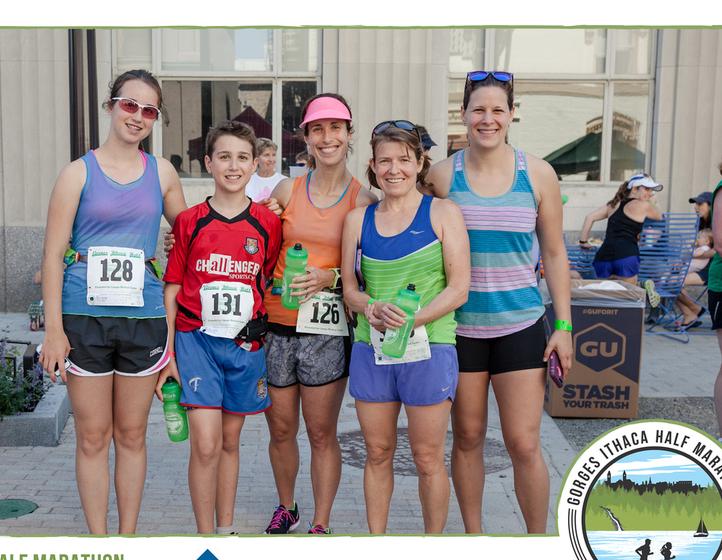 This is my fourth half marathon (so far) in 2016. It is Scott's "year of the half marathon" (he's run 5) and somehow I was following close in his footsteps. In the Fall of 2014, I ran the Wineglass Half and upon arriving, decided that I wasn't really a fan of the distance. Somehow it seemed too short to bother with all the pre-race stress. But, we live 20 minutes from the start line, race director Ian Golden always puts on a great event, and heck, I'd run it last year with my friend Jenny and had a blast! I decided I should sign up for the second year.

I paid no attention to the course and didn't have any kind of race strategy or focused training. I'd recently run Boston's Run to Remember with Xander. Prior to that I'd raced the Flower City Half by myself, hitting a course PR! This was going to be a fun, hometown run with friends!

Scott and I signed up months ago, back when the race was affordable and you had to put it in your race calendar to avoid accidentally slotting something in its place. The week prior, after enjoying Boston's Run to Remember, Xander said, "Are we doing Gorges Ithaca?" We said, "Yes, Mom and Dad are." He replied, "Well I want to do it!" I looked at his sister and asked her if she was up for running with him as I continued, "I'm running with my friends." She looked at me and said, "Really Mom? I don't really want to run another half so soon." Scott wasn't up for giving up a race to run with Xander during his year of the half marathon. I didn't feel comfortable with our 12 year-old running solo and selfishly, I wanted to run with my friends. We dropped the conversation and a day later the kids came back to us saying they were in.

I decided it might be prudent to actually look at the Ithaca Gorges Half Marathon course map. I glanced at it and saw that we'd hit a hill around mile 9 (turns out it was actually mile 7) and I thought the hill was "un-runnable". Close to the hill from last year's course, I thought it took a steep turn to the right. I spent time telling people that I would be walking up that hill and blabbed on about it being too hard to run. I'm sure I annoyed people who actually knew that the hill was gradual and rather fun, but they politely put up with my nonsense. We all got our race day clothes out and were ready for the early start.

Early start and before the race

About the early start. Since we now get up at 5 am every day, a 7:30 am race start in my hometown is not actually early to me. We had time to enjoy our typical morning coffee, eat breakfast and leisurely saunter off to the race. When we arrived we chatted with local friends, and I realized I didn't have my race band for post race beer and food (Scott picked up our bibs and I didn't know about the band. Of course the rest of my family had theirs on. Luckily my friend Jess was working the same day pick-up table and she quickly hooked me up with one!)

We posed for a family picture, gathered with a bunch of local friends and enjoyed small talk before the race. Soon Scott peeled off to get into race mode and the kids bid us farewell as they found a spot to start from. Jenny, Christina and I confirmed that we were just running for fun with no time goal and no stress. It felt a bit like high school conversations that I frequently had, "Did you study for the test?" followed by, "Oh good, neither did I" as we went in but without the secret goal of acing said test. Not one of us really did care about how fast we went. We just wanted to enjoy the run! 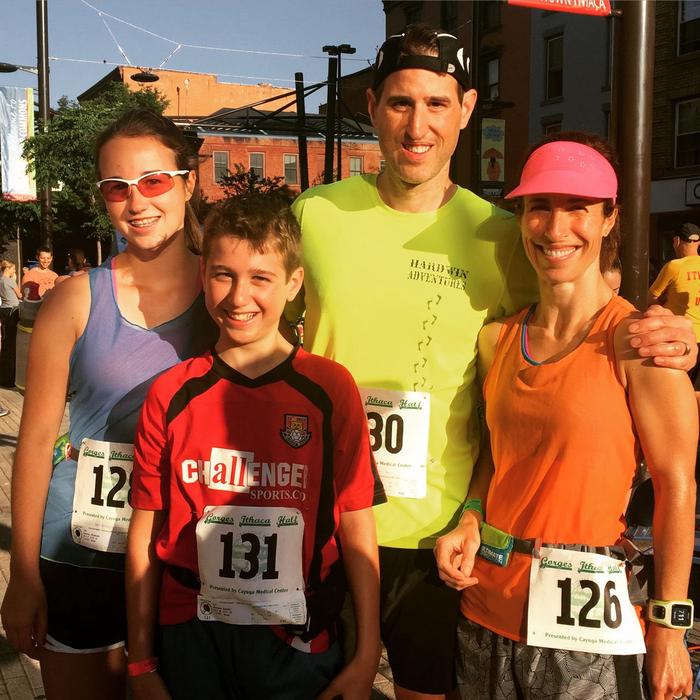 The Race: Gorges Ithaca Half Marathon - First Half

The start was really low-key and relaxed. It almost felt like a group run as we started off. We settled into a comfortable conversational pace as we began. The early miles passed quickly and I found myself admiring the scenery like a tourist instead of a local. I don't enjoy running Cass Park trails because they are flat and I don't find them very inspiring, BUT as I ran in this group and listened to people chatting around me, I realized I have just become numb to the beauty of the area. If I were on the canal in Rochester I'd probably be marveling simply because it isn't in my own backyard.

We caught up with our friend Chantelle around mile 5 or so and joined her for awhile and we passed my kids around this same time. They had started with a speedy pace and I knew when we saw them that Xander would struggle later. He is only beginning to learn about pacing. In the back of my head I worried about his sister having to motivate him up the hill but trusted that she could do it.

Jenny and I started to talk about the hill. I thought it was mile 9 and she thought it was closer to mile 7. It turns out it was around mile 7.5 so Jenny was closer! I intended to walk up this "un-runnable" hill. However, I am not very good at starting again if I walk. So, I thought, "I'll run as long as I can up this." Soon we hit the hill and it was shady and cool and we didn't take a right up the steep part of the hill. Instead it was a gradual climb that was actually FUN! I I just ran and ran ... and ran.

Soon we were at the top of the hill, running through Cornell and back into the streets of downtown Ithaca. We waved to friends working course crew and water stops and enjoyed the views. There was one part of the course that was a windy downhill that was really fun! 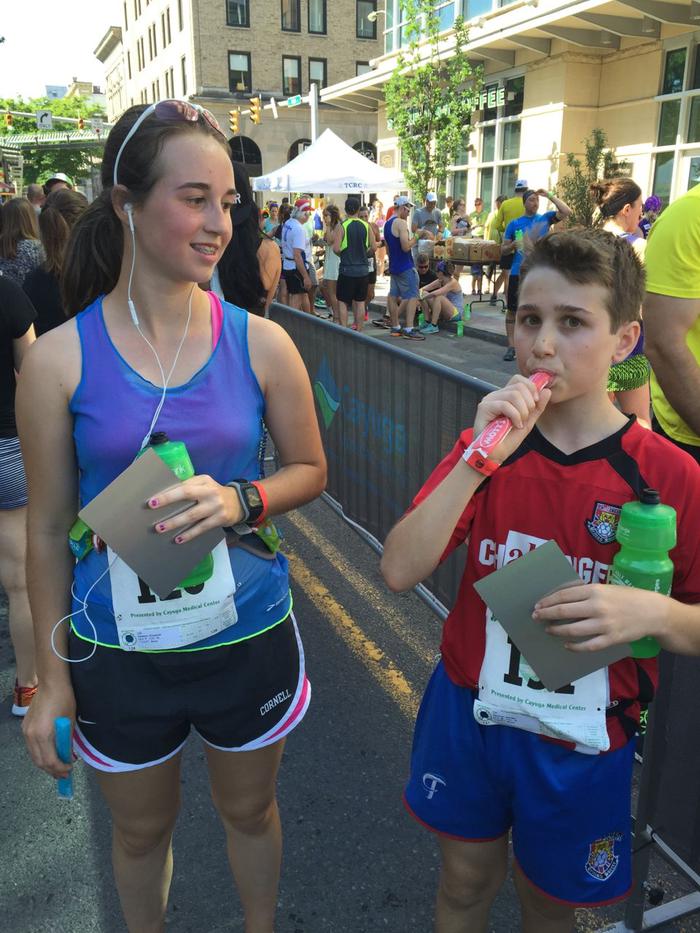 Elizabeth and Xander after the race.

As we crossed the line, Ian announced us. It is always fun to have Ian announcing. When I first picked up running as an adult and went to visit his store, Finger Lakes Running and Triathlon Company, he sold me my very first pair of running shoes (and many pairs since then). Ever since that first interaction with him I've appreciated his energy for the sport. I grabbed my post-race reusable water bottle and finisher plate and went to watch for my kids. It wasn't long before they crossed the line and we were all reunited! 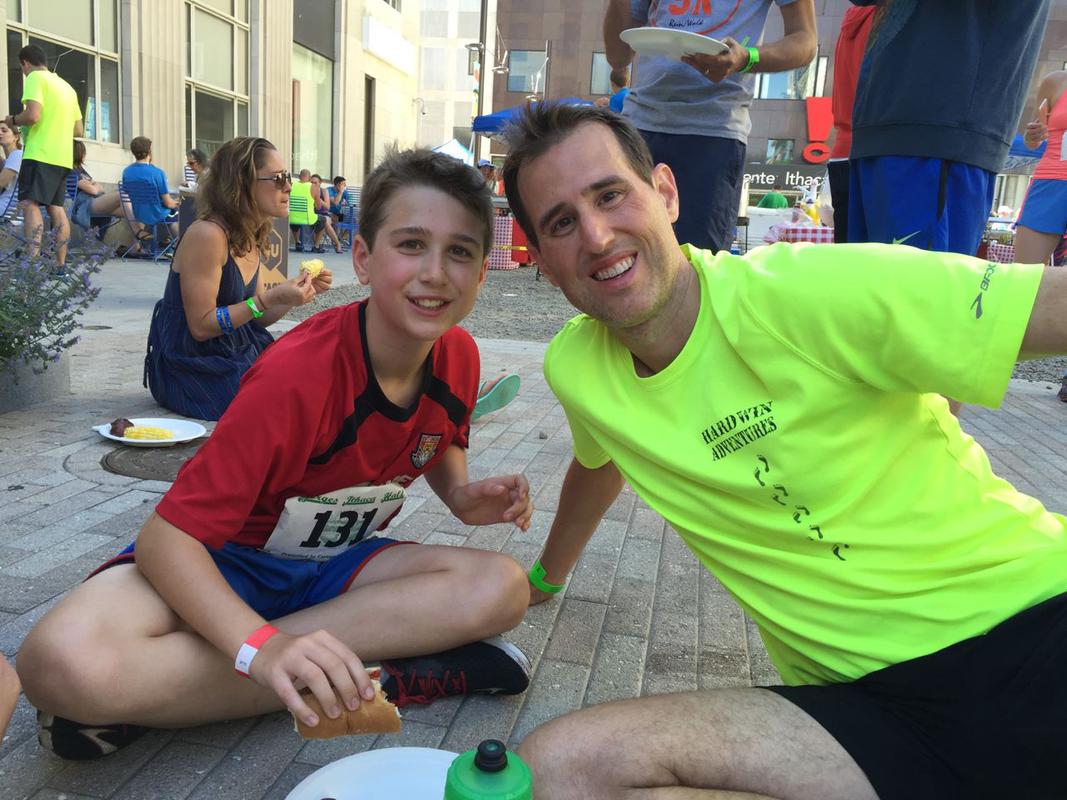 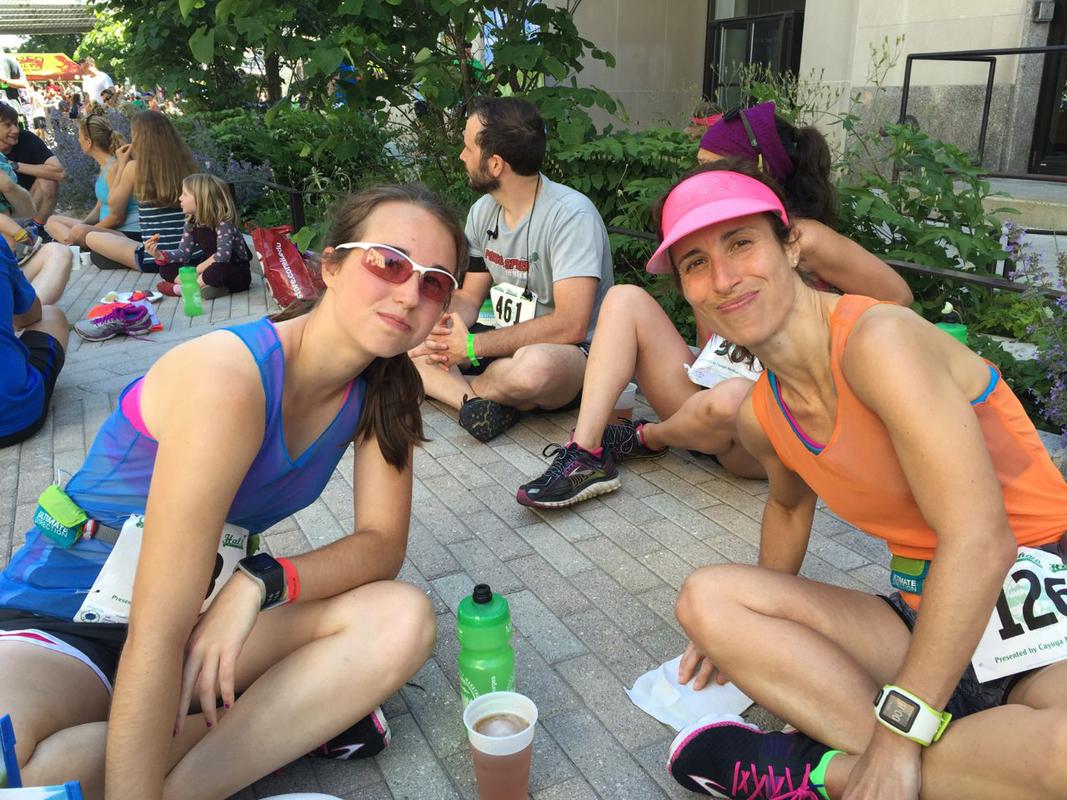 At 9:30 in the morning suddenly we found ourselves enjoying fruit, veggie burgers, corn and more from Yellow Truck Catering. We even enjoyed Ithaca Beer!! I love that about racing: the odd hours that you can consume things and have it feel totally normal. We hung with friends, posed for pictures and celebrated our morning together.

As for the kids, Elizabeth said it was someone else's turn next to run with Xander. The hill was a struggle for her to motivate him through, as I suspected. Xander asked when he could do a marathon and we all laughed. We told him it would be best for him to get a lot more training under his belt before tackling that distance, but that we applauded his enthusiasm!