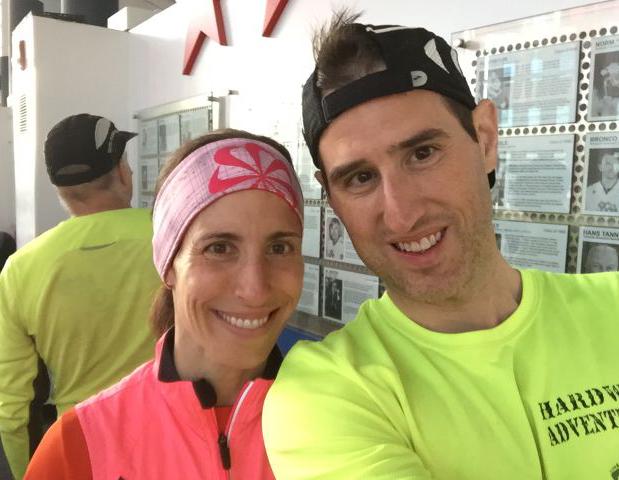 On Tuesday as we drove to Ithaca for something, my husband said, "You know there are still spots in the Flower City Half. Wanna come with me? I'd love your company at 5 am." Hmmm... I originally didn't register because this is Scott's year of the half marathon. I've run it before and we wanted one of us free to drive the kids somewhere if they had something going on. As luck would have it, they were free and my training called for me to run 2 hours on Sunday. "Sure, I said. Let's do it!"

Not Trained to RACE

I ran the Skunk Cabbage Half two weeks ago with my friends, Christina, Chantelle and Jenny (though mostly with Christina). It was GREAT fun! I didn't feel ready to race a HM and just enjoyed a nice run with Christina. It wasn't slow by any means, but I wasn't working to hit a PR, making it a fun conversational run with a friend.

So, as I thought ahead to the Flower City, I remembered the one time I raced this. It was 2014 and my goal was to have a PR. For me at that time a PR was a sub 1:50. I trained hard all winter, religiously doing speed work, long distances and getting out there even when it was VERY cold, rainy, or snowy. This year I hadn't trained and didn't feel a bit ready to race. But, as luck would have it, I am training for my first Olympic Distance Tri. An article that I recently read on beginnertriathlete.com said this about getting faster.

Get out of your comfort zone: Too many times I see athletes that run their 5k, 10k, and 21k races at the same pace.  I often wonder how this is possible.  My hat is certainly off to anyone who steps up to the start line of any distance, but if you don’t have the ability to get out of your comfort zone, you won’t get faster, no matter how far you can run at one pace. Workout with faster athletes once per week and see what it’s like to swim, bike or run at a faster pace than you currently do. Even changing up your run pace by 15” per mile will give your body a challenge from the same old, same old.

Perfect! I would RACE this event. I've done several half marathons in the last year, but this would be the first time shooting for speed since October of 2014 when I hit my PR in the Wineglass Half.

30 Miles a Week IS Training!

At about mile 7 as I was hitting the worst of the seemingly never ending uphill (that I always exaggerate after the fact because truly it isn't that awful) I realized that 30 miles a week is training. All winter I've hit my 30 miles, plugging away week by week. No fanfare, no training plan, just winter maintenance. It has been really liberating not being tied to a training plan for these winter months, while at the same time wonderful to just enjoy the miles.

I started to think about my 8th grade Algebra students. The end of the year is drawing near and more and more I'm reminding them to prepare for the Regents Exam with just 20 minutes a day of focused practice. As they headed out for break I said, "Many of you are going on great fun adventures. Bring your review book with you and just give it 20 minutes a day. No matter how fun your trip, I bet you have 20 minutes you can give Algebra." One of my students remarked that he doesn't study because he always manages to study what is NOT on the test so he's learned it is better to just avoid preparation.

As I ran I thought about him. The truth is he may not "study" per se but he IS prepared. He works his mind in class, does all assigned work, participates with his group and contributes to class discussion. He studies even though he doesn't realize it. I am TRAINED for this race, even though I didn't follow a plan and sign up months in advance.

Typically the week before a race I rush to buy new music. I always start with an email to my friends saying, "Can you recommend some songs I should buy?" Then I spend an hour or more listening to clips and buying songs. I don't like to have heard the music before I run a race, so I have to get all new music, or at least mostly new.

We recently started a subscription to Apple Music. Suddenly there is no need for such preparation. I can add anything I want to my library at any time. They even have pre-made playlists especially for running that I can use. On the way to the race at 5 am, I found two such playlists, grouped them into one Flower City Half 2016 list on my phone and I was ready. 91 songs that I'd probably never heard before - plenty of chance to skip anything I didn't want to hear and more than enough music for the distance. Pretty Cool!

Our running temperatures were forecasted to be between 37 and 39 degrees. Heavy mittens, an ear band, insulated tights, vest and my trusty Turkey Trot orange shirt. The same attire I'd worn at the Skunk 2 weeks prior. I was all set ... or so I thought.

I knew I was in trouble when I was standing at the start and I was NOT cold. I should be freezing, eager start running. Nope. I forgot the great 20 degree rule that I always abide by when I'm racing. Dress for 20 degrees warmer than the actual temperature. That would be nearly 60 degrees. I should have worn capris, short sleeves, gloves and an armband. I spent the first 6 miles thinking, "I'm so hot. I'm so hot. I wish I had worn capris and short sleeves." Then, at mile 6 I thought, "Get over yourself. This is what you wore. You are not dying of heat, do not lament your choice. Just run!"

At mile 6 as I headed up what would be 24 minutes of hills into the cemetery, my average pace was 8 min/mile. I was on track for a course PR for sure but I tried not to focus on this too much. When I hit the cobblestone steep section I *thought* it was the last hill. I was sure to have an actual PR - my average pace had only slowed to 8:06 by this point and I had 5 miles to make that back up. It wasn't the top and as we wound around and around my average pace dropped to 8:10. Still, I was reasonably confident I could hit a course PR. The last few miles were challenging because they weren't really downhill at all. I don't love running on the waterfront near U of R - it always reminds me of the Rochester Marathon  (the last 6 miles) when I was so spent I felt I was clawing my way to the finish. I stopped at a water stop and lost 2 seconds off my pace so I was down to an 8:12 ... soon it was 8:14 and then 8:17 by mile 12. In the back of my head I remembered my old course pace to be an 8:19 and thought, "I am going to hold this" 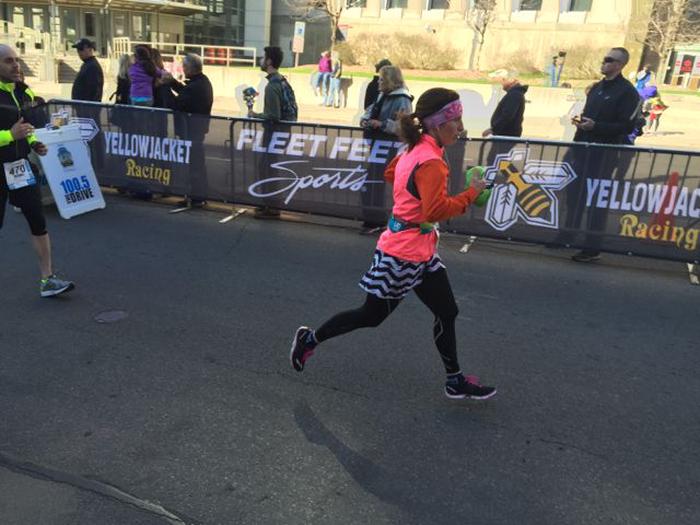 Sprinting toward the finish line

As luck would have it, the high fives by Fleet Feet and the cheering on the last couple of miles really energized me. I was able to get back down to an 8:15 overall by the end. And, since Scott was finished he nabbed a picture of me as I neared the finish line! Read his race report. 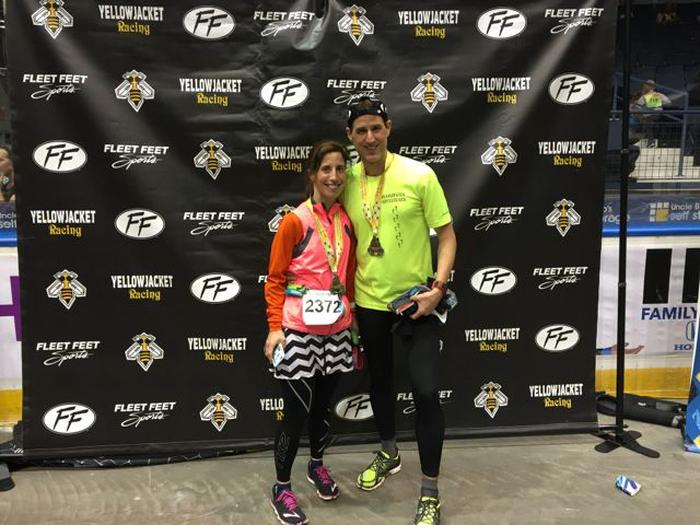 Scott and me after the race