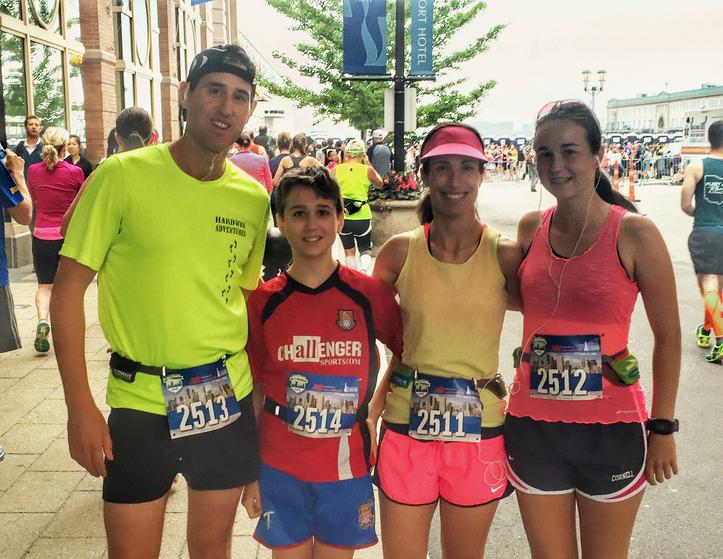 Last Fall, we got a call from our real estate broker letting us know that we had found a renter for our house over Cornell graduation weekend. This is something we typically do, and usually we stay local. However, this year we thought "let's do a race!" My brother-in-law lives near Boston and we thought it would be fun to visit him. As luck would have it, Boston's Run to Remember was scheduled for that weekend. Soon to be 12 years old, Xander was VERY excited that there was no minimum age limit for this event. He felt ready to run his FIRST half marathon.

We decided that since this is Scott's "year of the half marathon" that he would race solo, I would run with Xander, and Elizabeth would decide closer to the race how she'd run it. This would be her 4th half marathon, and if she chose to run alone, it would be her first time running in a HUGE race solo. The day before the event, she decided to give it a go, sharing with us how grateful she was to have had the experience of running Wineglass alone this Fall, while our friend Brenda generously rode the bus with her and guided her to the start. After that experience, along with 2 other races with me, she felt ready.

The kids followed a training plan (for the most part). Xander wasn't so great at hitting his mid-week runs, opting to enjoy time on his bike instead. He did hit every long run, so while we knew he wasn't fully trained, at least he had experience running 10 miles. Elizabeth trained better than her brother, but even she wasn't as well prepared as she has been for her other races.

Boston the Day Before 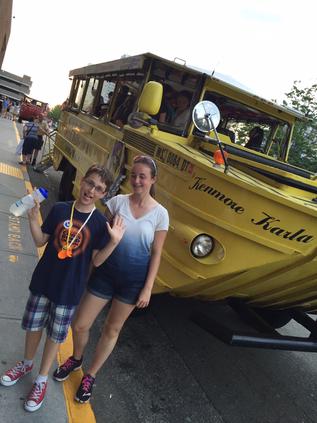 It was 94 degrees and humid. We checked into the Seaport Hotel right near the start/finish and picked up our packets. After enjoying time with Scott's brother and his wife and son the day before, we had planned a rather low-key family day in the city. Our plan was to not tire Xander out and to do a few touristy things. We used to live in the area many years ago, but didn't do any typical tourist things then. Xander loves to plan trips, so he had selected the Boston Duck Tours as his big pick for the day. We headed over to the Duck Tours on foot, planning to take the kids to our old favorite burrito spot, Anna's Taqueria. It was good, but I couldn't help thinking that some things were best left as memories. My heart belongs to Viva Taqueria in Ithaca now, and I was sad to lose my most lovely memory of Anna's by returning. 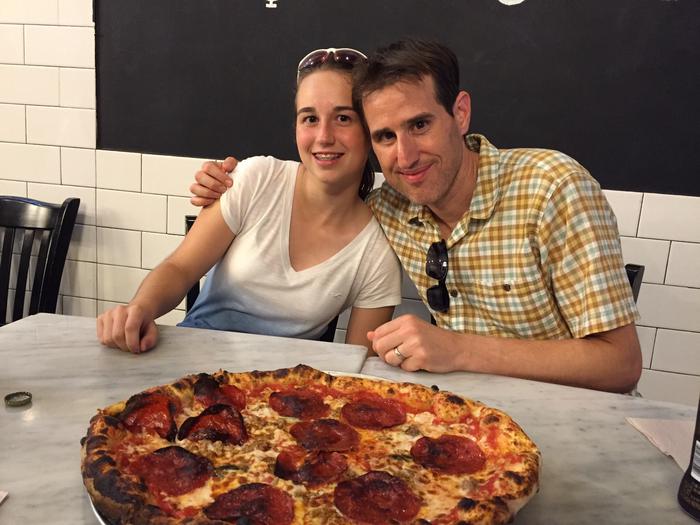 As we wandered the streets, we ended up near the Museum of Science to buy boat tour tickets. I saw the banner for the IMax film, National Park Adventure. I said, "I want to do that!" and everyone else thought it would be pretty cool too. So, we picked up tickets for both things for later in the day and continued wandering around the city.

We stopped for a quick dinner at Crush Pizza and laughed that we had put about 10 miles on our feet! So much for keeping things "low key" for Xander. We had a wonderful day, but he was completely exhausted when we hit the bed. 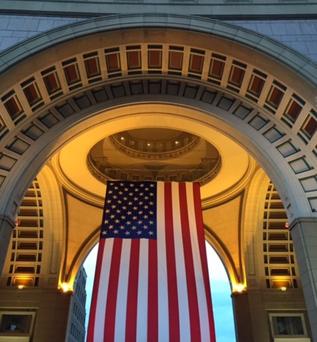 With a 7 a.m. race start, we were up at 5 to get ready. We enjoyed our bagels and peanut butter in the room and chatted about how it was the first time the 4 of us were at a big race when were ALL running. At this point, Xander was still not that jazzed to be running with me. He felt ready to run alone. I told him when he saw how big this race was, he'd feel grateful for our plan.

We ventured outside and his eyes grew wide. He whispered, "I'm happy that we're running together." I smiled and said that I was too (there were at least 13,000 bibs between the half marathon and 5 mile races). We said our goodbyes to Scott and then the 3 of us made our way to our starting spots. Xander and I would line up at the 9:30 min/mile area and Elizabeth would continue to thread her way up through to the 9 min/mile area. 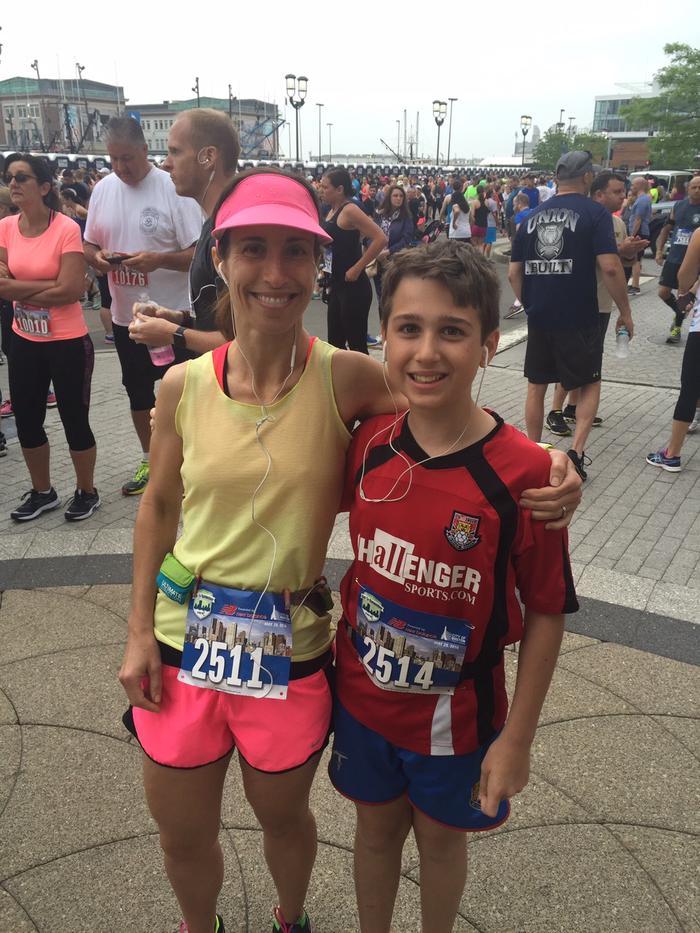 As the gun went off, Xander and I started with our music on. We chatted here and there and I told him I'd keep him updated about our pace to let him know when we reached a 9:30 average. At that point, we could just maintain the pace and not worry about speeding up. After weaving and bobbing for the first 2 miles, we finally hit a 9:30 average and settled into a rhythm. As with the first time I paced Elizabeth, Xander and I hadn't really run together before. We were pretty comfortable for not having any experience as running partners. I had to go to the bathroom from almost mile 1, but decided that I didn't want to mess up Xander's race if I didn't have to. Instead, I chose to skip all the water stops, except for a quick sip at mile 5 and again at mile 10.

The course loops along the Charles river with 2 separate out-and-backs and we knew we had a good chance of seeing Elizabeth. We ran by her near mile 4 and then again around mile 7. It was fun to see her and cheer like crazy for her!

On the 2nd out and back there were a lot of police cars and they were all out there to high five us. This race is held in honor of men and women of the police and fire departments who have lost their lives on the job. It was an honor to be part of it, and felt very special to have so many of them out on the course.

As we neared mile 8 I noticed that Xander didn't have his music in anymore. I said, "do you want to chat?" He looked at me like I had 9 heads and snapped, "no!" So, I kept my music in and kept on running quietly next to him. Around mile 10 he was flagging and I suggested that he grab gatorade at the next water stop. I tried to explain that most people start to feel tired around this point and that it would help him. He said he was fine, clearly taking it as though I was saying that HE needed it, and that HE was struggling. At that moment, a woman on his left started a conversation with him, telling him how amazing he was and asking his age etc. I felt like a really bad Mom, knowing she probably thought I was pushing him too hard. I decided to keep my mouth shut and just let him run on. Soon, he said, "can we walk?" I said it might be hard to start again, and he saw the water stop in the distance and said, "I can make it to there." As we neared the stop, I asked if he wanted to try the Gatorade. He said, "sure" and I grabbed a cup too just in case he wanted another. He guzzled the first glass and happily gulped down the 2nd glass followed by more water. Soon we were in that final push.

The Last 2 and the Finish 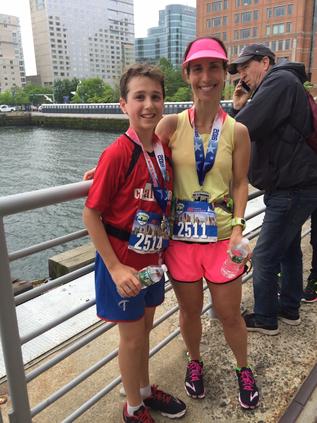 As we passed by one of my favorite parts of downtown, I mentioned that I used to hang out with my friends here all the time when I lived in Massachusetts. He said, "quiet" and I laughed a little bit in my head. As we hit mile 11, I said, "only 2 to go - just like running the 2 mile loop at home. You are almost done!" He said, "I am NOT almost done!" and I started thinking about how hard it must be to pace someone for 100 miles. You really have to check your ego at the door!

Luckily at this point in the race, Xander started to get a lot of encouragement from other runners. A few people ran by cheering for him, and one lady was so impressed that he was 12 and doing this that she just chatted with him for quite a distance. I could feel the spring in his step come back as we neared the end. Soon we were racing each other in toward the arch!! 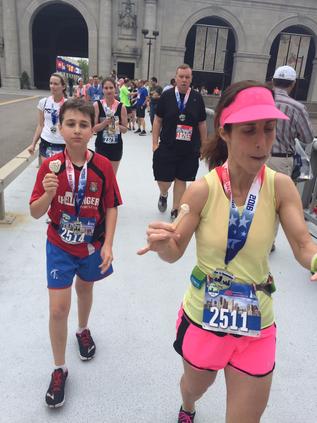 After the race we enjoyed some awesome frozen greek yogurt bars from Yasso that we had tried at packet pick up the day prior. Xander also wanted to find some of the yummy Noosa Greek yoghurt we'd tried the day before, also at packet pick up. No luck with that one, but we did remember the name for later! This made me think about marketing - back to one of our early races when CheriBundi (then Cherrypharm) was at the Rochester Marathon. I'd tasted one small cup and loved it so much we've been subscribers ever since (and told all our friends about it)! Xander was smitten with the Noosa lemon yoghurt, so we promptly looked it up and discovered that our our local Wegmans carries it!

We posed for pictures, chatted with each other and headed up to our room to shower. Aah, the wonderful benefits of staying right at the start/finish! That was SO awesome. 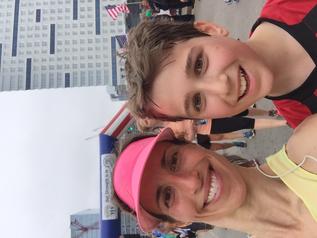 Xander had a GREAT race

Xander had a GREAT race. He started strong and finished strong. He had only a few moments when he felt like he couldn't continue, and we had just a bit of stress during the run.

I was happy to pace him for his first big race! I imagine there will be many more in his future!!