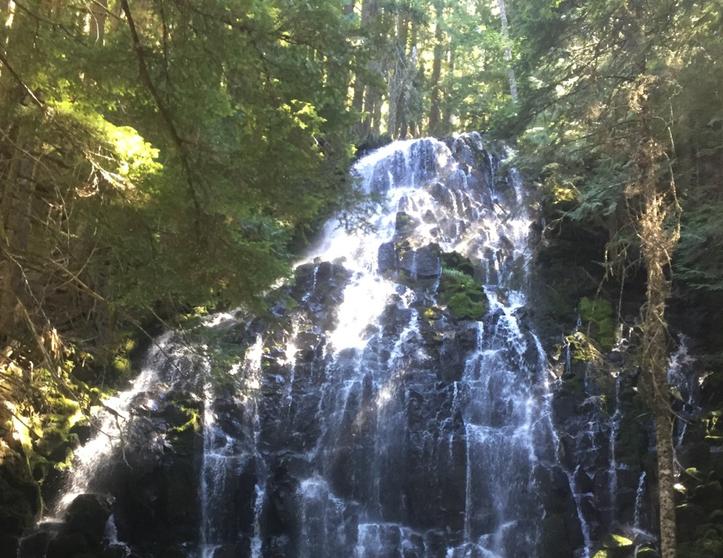 I can't believe it is almost over

Creatures of habit, Scott and I popped up at 4:45 again and I did yoga in the room. When I went downstairs, Scott had already prepared me an iced coffee. I read a book for awhile and enjoyed coffee before heading upstairs to get ready for our long run to Ramona Falls.

When I came down, it was breakfast time and we enjoyed another delicious breakfast. Having food prepared for you every day is really lovely!

We finished our breakfast a bit after 7 and needed to be ready to get into the vans by 7:45. The vans would take us to Timberline where we'd start in two groups. At the camp, Yassine gave us the head's up that we'd split into a fast group and a medium group. Scott and I knew we'd be in different groups for this last day and we were pretty happy about this. It meant we would both talk to more people and we'd both be in a group where we felt our pace was appropriate for the situation.

The general rules for mountain hiking and running state that your party may be no larger than 12. We had 18 campers with 4 instructors so our groups needed to be fairly even. When we arrived in the parking lot they asked us to self-select into the fast or medium group. The fast group had 4 and our group housed the rest. Hmmm... this wasn't going to work. One by one, people moved over to the fast group and the groups evened out. We started getting prepared to run; the fast group would leave and then we'd follow about 10-15 minutes behind them so that we'd keep a healthy distance between the two groups. 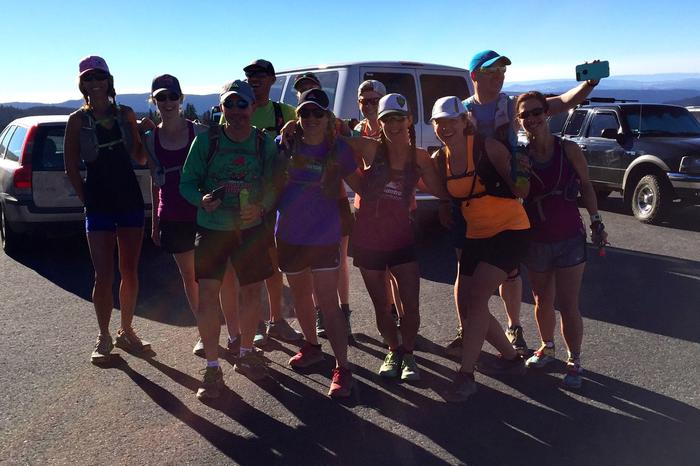 My group all ready to go!

I looked around at my group and suddenly realized that I was the only one in the group that had brought both of my poles and I was the only person without a hat or visor of some kind (most people had trucker hats on). I had opted for sunglasses for no particular reason. I also committed to using two poles because I knew they'd improve my confidence on the hills. Amy had warned us that by using the poles we'd change our workout to be more of an upper body workout as well, and I was prepared!

Soon we started and in those first 10 steps I thought, "What are you doing? You are NOT going to be able to run 14 miles!!"

The trouble with patterns

We had talked about this in hill training. You can get very comfortable with doing a certain thing in a certain spot. Always walk that hill? It is harder to run it because of the pattern you've created. This was a trail that I knew well from hiking. I always HIKE this trail, and always with my kids. It felt weird to be running. I was afraid I wouldn't be able to keep up.

However, another thing about patterns is that when one element changes, it is easy to take a different direction. I was with a group of people I didn't know so well and I am certainly fit enough to participate. I would just have to rise to the challenge!

This trail was beautiful and I found myself NOT looking around because I was paying attention to my footing. The way we spread out I was smack dab in the middle of the group. The people ahead of me were chatting and those behind me were as well. I thought, "this is not that fun" and "I think I like to hike better" during that stretch. However, soon we reached the little Zig Zag and switched up our places in the line so I was near people. 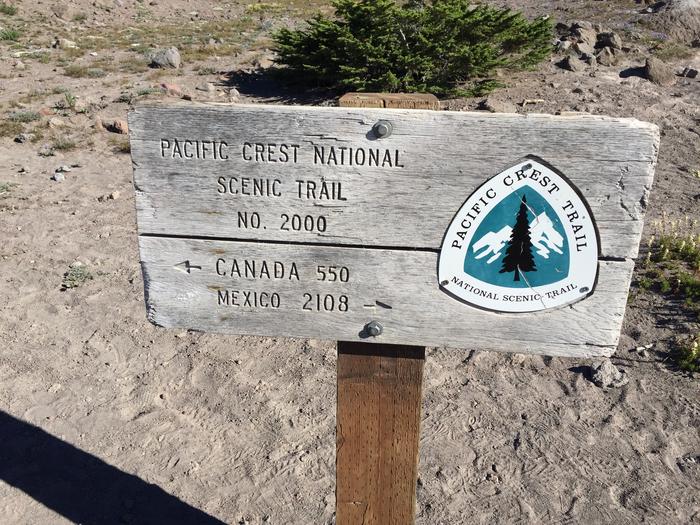 At this point we were on the Pacific Crest Trail, but soon we turned upward to head up to Paradise Park. Along the way we had to cross over several fallen trees, both large and small. One of them was really a climb and I got a little nervous climbing down from it. Jaime had offered to take my poles. Overconfident, I thought I was fine as they hung off from my hands. However, partway through the crossing I started to wish I had handed them to her. I made it down the other side, suddenly realizing how different it was to run with a group of adults vs hiking with children. Everyone had crossed the tree and kept going!! I waited for the crew behind me and stayed with them for the part up to Paradise Park. Our group mostly walked this uphill stretch (well ok actually we completely walked it).  I spent the next several miles chatting with Justin about everything under the sun and that was great fun! 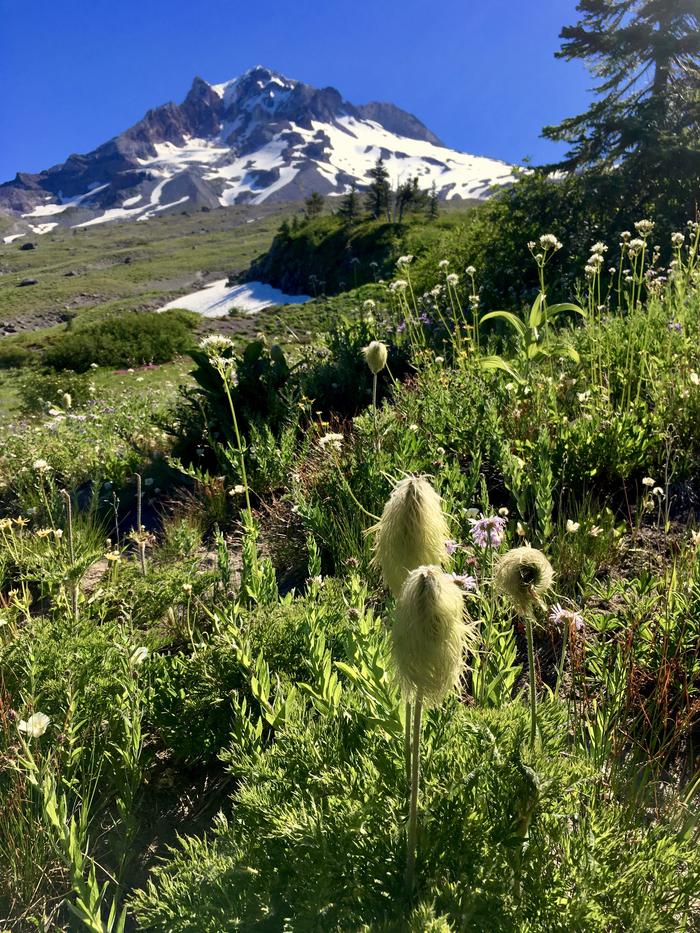 After a couple of lovely viewpoints and small stream crossings we had a very long downhill ahead of us. Each time we stopped for a view we shuffled our places in the group so there was ample opportunity to meet and talk with different people. For this downhill I tucked in behind Kristin and her friend Kate was right behind me. Kristin and Kate are in their 20s, so we had some discussions about age groups, triathlons, training runs and racing in general. Kate shared how supportive the tri community has been in her area, and I told her we had a similarly supportive crew out here in Ithaca.

At one point, Kate and I talked about how we tend to be better at running training runs alone vs with our respective partners - we push ourselves harder when we are alone. But we agreed that we could push ourselves in a group like this too because we didn't know anyone well enough to be whiny yet!!

As we were talking, suddenly I realized that Kristen was not in sight. She had just literally flown down the steeper downhill, much like my friend Laura does at home. At first I thought we had missed a turn because we'd been so focused on talking!! I got a little nervous and stayed a little worried so I sped up, hoping to see her as we switchbacked. Soon I saw a glimpse of Kristen ahead of me. Whew! I hadn't missed a turn. She waited for us before the coming stream crossing and pretty soon our entire group was back together.

My first intentional crossing THROUGH a stream

Two years ago, I hiked in this area with Sarah and Adam and the family. The trail we took was different, starting at Ramona Falls, but it faced a similar stream crossing. We spent a long while at that stream trying to find away across that would keep us safe (the current was very strong, we had big packs on and there were no logs to hold onto). Today, Joelle had already crossed. She had found a log to cross and she warned us that it was a bit unstable. Yassine said the log was indeed the way to go though and he offered to demonstrate for us. We said, "sure that would be great!" He explained that if you had a pole you should have a pole in one hand and have your other hand on the log. "Hmmm I thought as I handed one pole to Kate, this means we are walking IN the water, not ON the log." I have never purposefully crossed a stream if there is ANY other option. Suddenly grateful that I had worn my fast drying socks, I said, "OK" and walked through. The funny thing about this? It was absolutely no big deal. I dare to say it was FUN! Much more fun than trying to cross on the slightly unstable log and worrying about actually falling off. Soon our entire group had crossed exactly the way Yassine showed us and we were on the last push toward the falls. 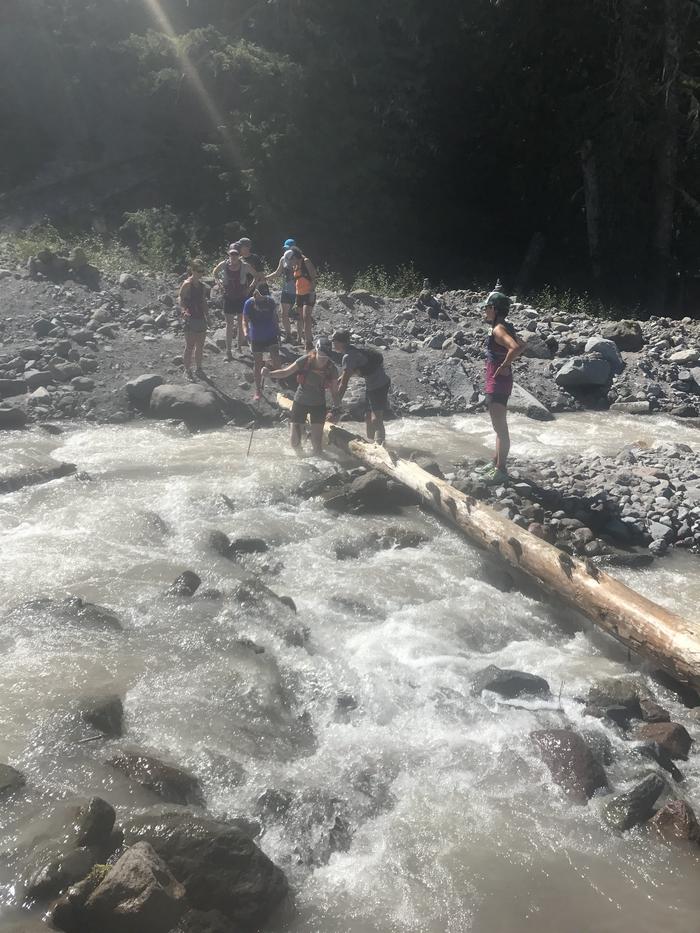 The last portion up to Ramona Falls was a slight uphill grade, and I was getting a bit hungry. I had eaten several things that Sarah had given me for my pack (Scott and I missed the part about packing food for the actual run! Thankfully she had plenty and many other campers also offered us stuff!!) I stopped for a Honey Stinger waffle about a half mile from the falls. I thought we had farther to go, so I felt a bit silly when I arrived so soon after!!

We arrived, took a group photo and hung out looking at the beautiful water. There were A LOT of flies here, so we were eager to get moving. We had to stagger again so that our groups followed the rule of being 12 or fewer participants. 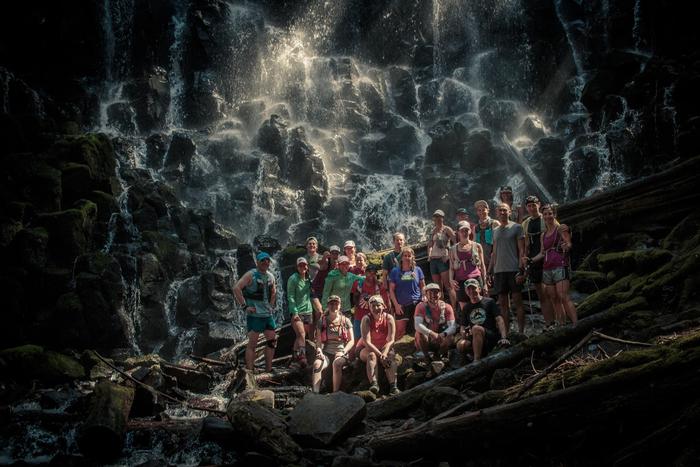 In this last 3.5 mile mostly flat stretch I started chatting with Mark. We were talking about Sisters and Bend and I guess I stopped focusing on the roots. I was getting tired too so about 1.5 miles in I just tripped pretty hard. I was grateful for my amazing Leki poles that kept me upright, and bummed that I had hit my left big toe bad enough that I was worried!! Everyone around me asked if I was ok and I said I was, and then stopped to assess the situation.

I dropped to the back with Jason and he advised me to keep my shoe tight, letting me know it should be fine for the duration of this but it could swell up or hurt more later. He was right - it was fine. It hurt a bit but it was ok. I'm writing this 4 days later it still hurts so that's a bit of a bummer, but had I not had my poles, I think I'd have cut up my knees, hands etc so I feel pretty grateful!

All good things must end and after our run it was time for this camp to end. About half the participants were heading back to the Mazama building in Portland and the other half were heading back to the lodge at Government Camp. Sarah was staying one more day with the Ultra Running Camp and she suggested it might be fun for us to stay an extra night. We agreed, so we'd have one day to hike and spend more time with Sarah and Adam before taking the red eye home on Monday night.

We asked Justin to drop us off at Government Camp and headed to Mt. Hood brewery for a late lunch. Scott talked me into ordering a pitcher of beer to split and I got a bowl of vegetarian chili while he enjoyed a cheese and bread platter. I LOVE how amazing food and drinks taste after a mountain run or hike! We had so much fun sharing stories from our group run with each other. 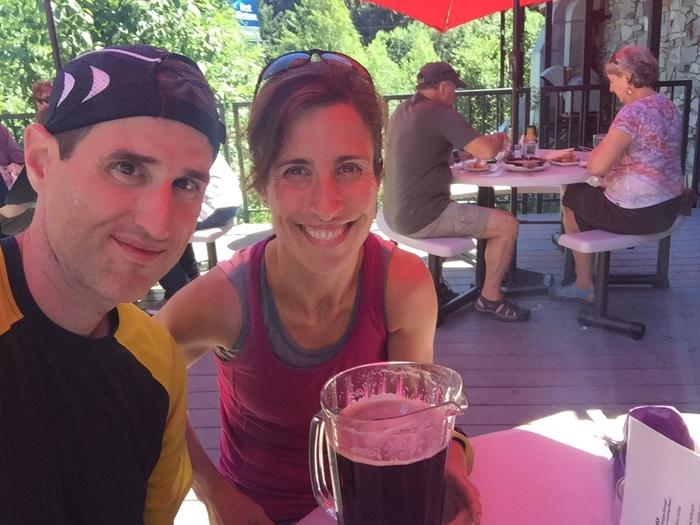 After this we wandered very slowly up to the center of Government Camp and bought some snacks for our hike the next day. It was fun to be in the little town that our kids had spent their time in during summer camp. Now we were the summer campers!!