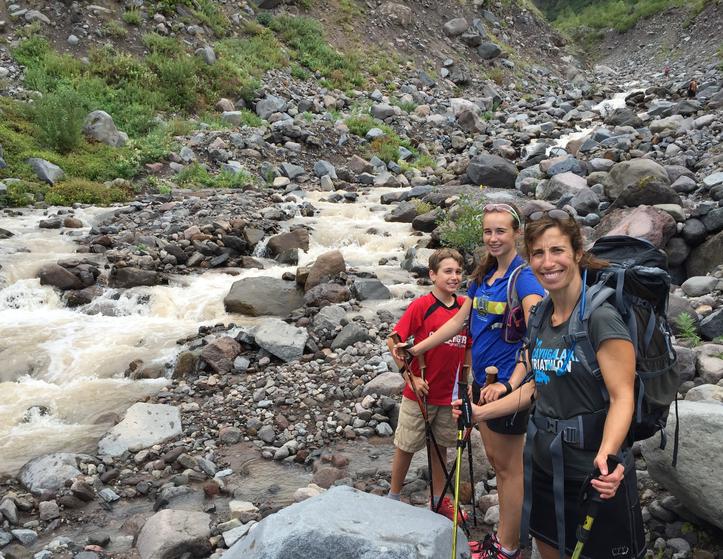 This hike to Ramona Falls and Bald Mountain was the last hike of our trip to Oregon. We selected it because I swore that Sarah had taken me on this hike the very first time I went out to visit her. It was a dreary August day when we left Portland. The fog had settled in and it was a chilly, wet morning. As we arrived at the trail head, Sarah and I debated constantly about whether I'd been there. It became pretty obvious as I looked around that my memory was mistaken.

Off to Ramona Falls we go

There was a large parking area at the trail head, complete with porta potties. We all got prepared to hike, secured our packs and soon our crew of 6 was off on the trail.

The trail to Ramona Falls started off with a soft path and large pine trees. The light was filtering down, and we enjoyed a pleasant stroll together as we frequently shifted our positions to engage in conversation with different members of the group. 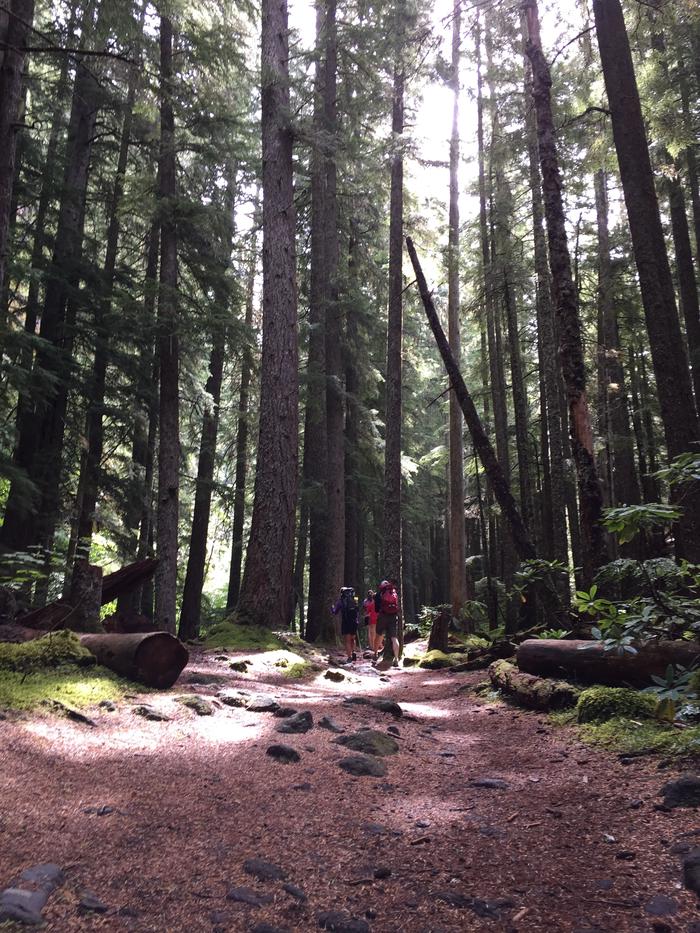 Soon we reached the stream that we'd been getting glimpses of as we walked. Littered with logs, we realized we were going to need to cross over a makeshift bridge.  There were a lot of people out on this Saturday morning, so we hung back to allow them to cross before we began our trek over. Everyone did great with the log bridge and soon we were on the other side. It wasn't long after that crossing that we enjoyed our first morning nibble. Our drive there was long enough for everyone to be moderately hungry by the time we started our hike. 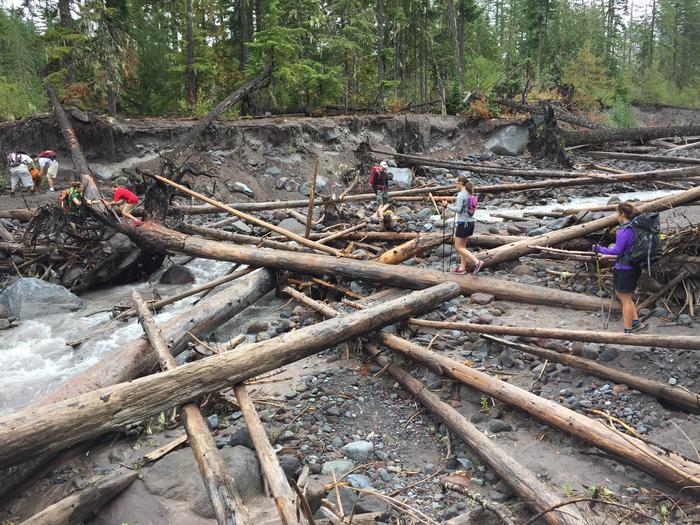 The popular portion of this hike lasted until we reached Ramona Falls. This was not great fun for my sister - crowded Saturday morning trails was not her cup of tea. I was frustrated that it was foggy, but we enjoyed the trek. We paused at Ramona Falls long enough to get some pictures before continuing. We were still debating which hike to do as we hit the split to turn off to the Yocum Ridge trail shortly after viewing Ramona Falls. It was still foggy, and the entire point of the hike was to view Mt. Hood. At this point in the hike we could see nothing but the fact that we'd be heading up the mountain in the fog. I was seriously bumming that this was the weather for my last Oregon hike of the summer. I always have trouble leaving Oregon, and just wanted to stay for another gorgeous August day. Ultimately, I think we decided to stay on the Timberline because the elevation change wasn't as great, and it was more of a loop than the out and back that Yocum would have been.

As we hit the fork, we stayed on the Timberline Trail, hoping the weather would clear. There were parts of the Timberline trail that were really narrow, overgrown, or very exposed.

It was as we were walking along the Timberline trail that we were still actively debating why I thought I'd done this hike before. As it became clear that we'd be crossing Muddy Fork 3 times, Sarah was even more adamant about how she wouldn't have brought me on this hike. The year I thought I had done this hike, I was almost 7 months pregnant with Elizabeth and had been given doctor's orders to keep my heart rate below 169. I wore a heart monitor that beeped whenever we went over that number. She was positive she wouldn't have taken me on 3 river crossings!  I totally agreed, but somehow still had the vague memory of a similar hike.

We arrived at the first crossing, and there was a fair amount of water. We had to consider how to cross, and knowing that there were two more branches coming up put us slightly ill at ease. It was a chilly, foggy day, so no one was keen to get fully wet with many miles to go. However, we made it across rather easily, and soon came upon the 2nd crossing. The 2nd crossing was relaxed. There were well placed boulders for us to climb over on, and we used our hiking poles to help us as we crossed. Confident that the first one was our most challenging one, we pressed onward enjoying the views as the fog started to lift ever so slowly.

The red line in the picture is our track, and you can see from all that zig zagging that the 3rd crossing was not a piece of cake! When we first arrived it looked pretty straightforward; not easy by any means but doable. However, on closer inspection we realized the water was swiftly traveling and every path of boulders petered out midway across. We hiked very far up the river, only to realize it didn't get any better. Soon, Scott and Adam decided to scout downriver and asked Sarah, Elizabeth, Xander and me to stay put and wait for them to holler.

Soon after trying unsuccessfully to throw logs and rocks, they were crossing over to test things, dropping their backpacks on the other side. They both have very long legs, and both were maneuvering pretty well across the river. 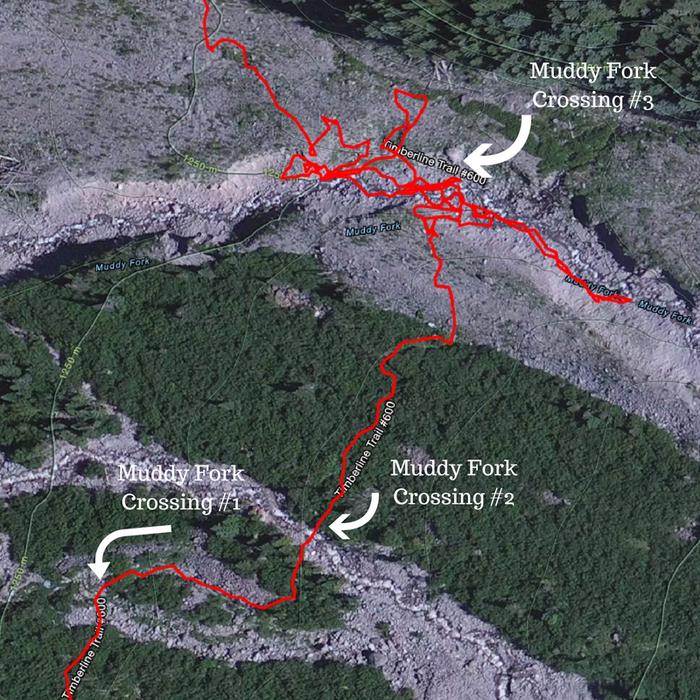 We knew they had scouted it out, and already brought their packs to the other side, but we still weren't quite sure. We all stared at the raging water for awhile before we agreed to give it a try. There was some discussion about turning back, BUT the fog was lifting even more and the most beautiful part of our hike was yet to come. No one wanted to bail this early in the game.

So, we went for it. The kids and Sarah were great sports. I was a little whiny but made it across. After we crossed, we sat high on the hill of the opposite side, dried our socks out and enjoyed lunch together. 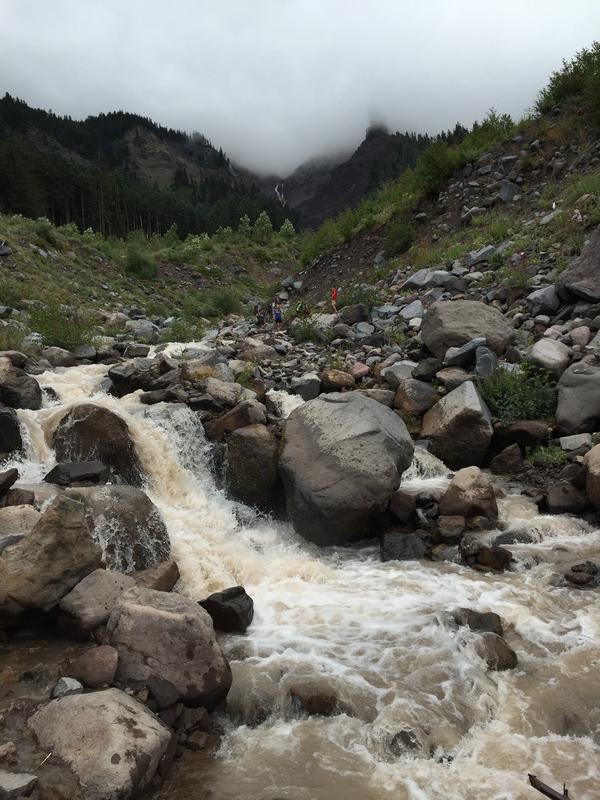 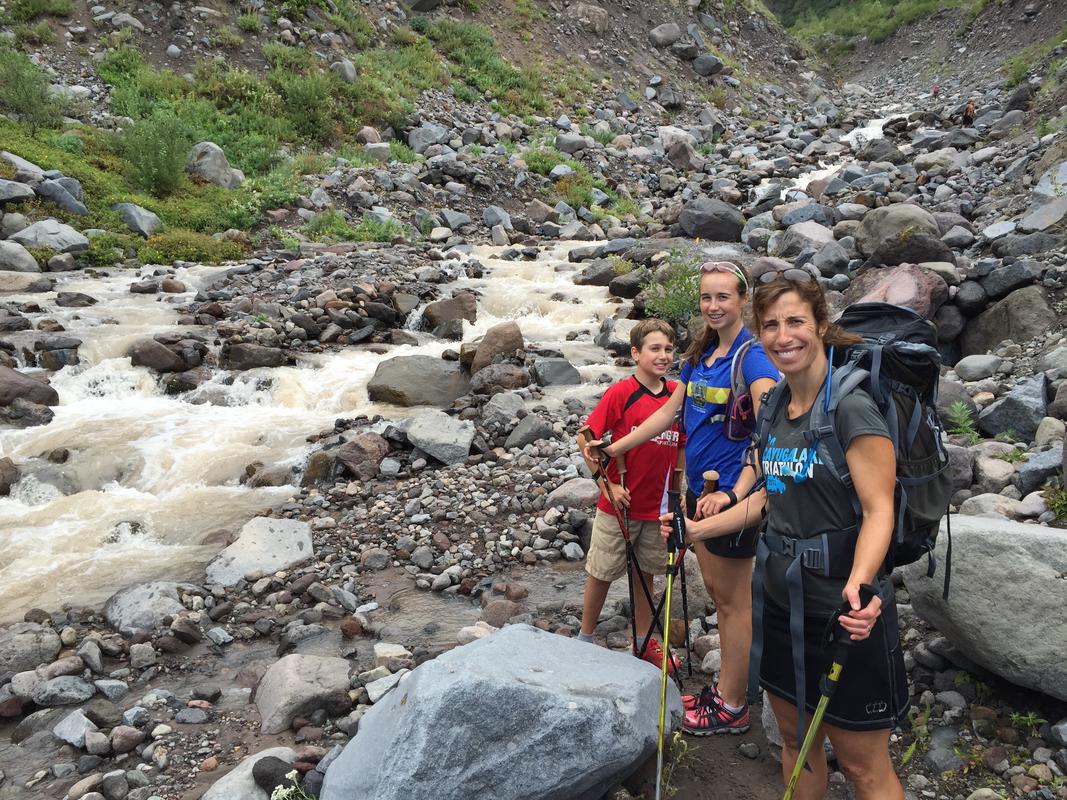 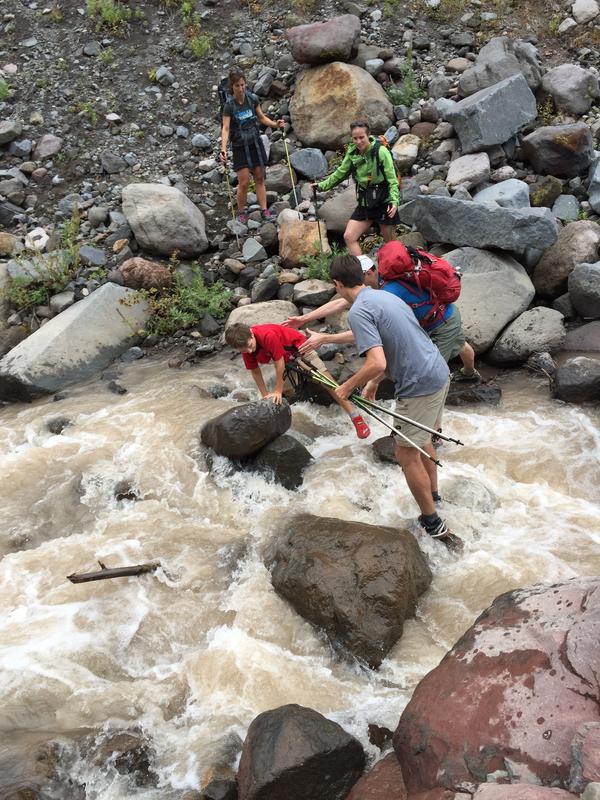 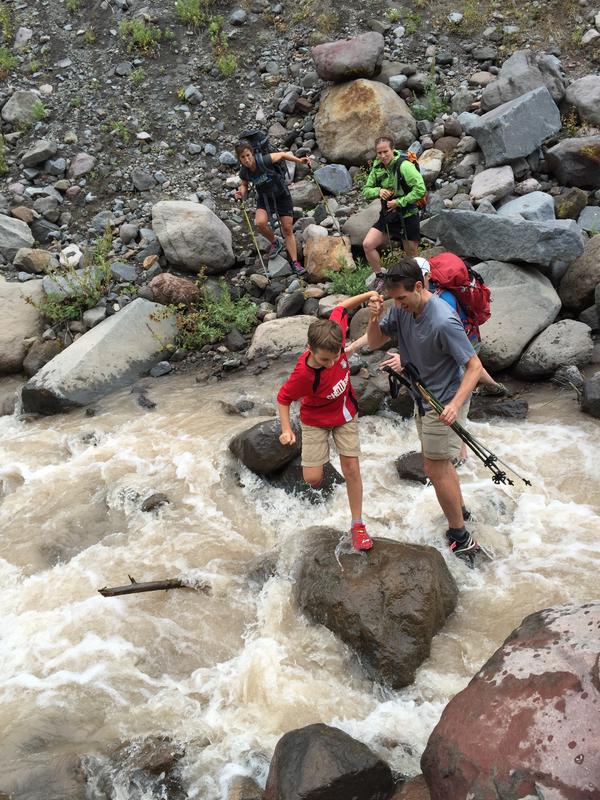 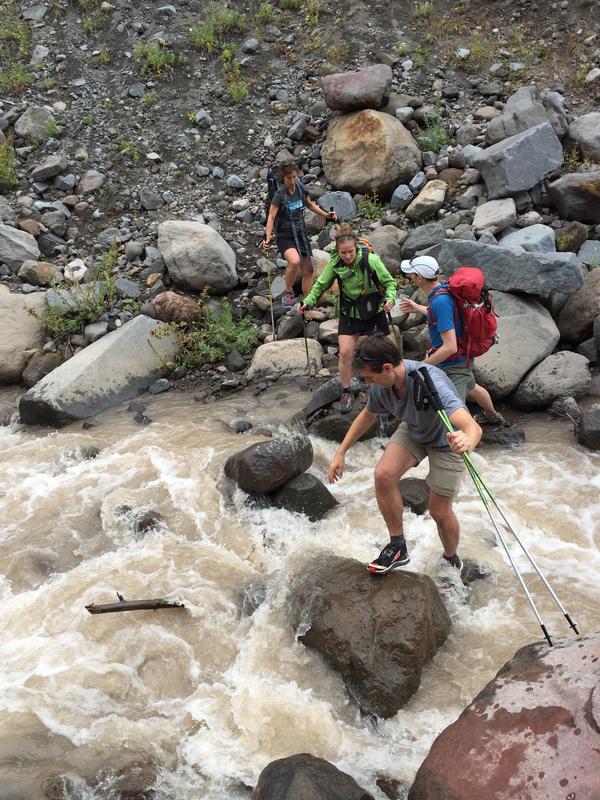 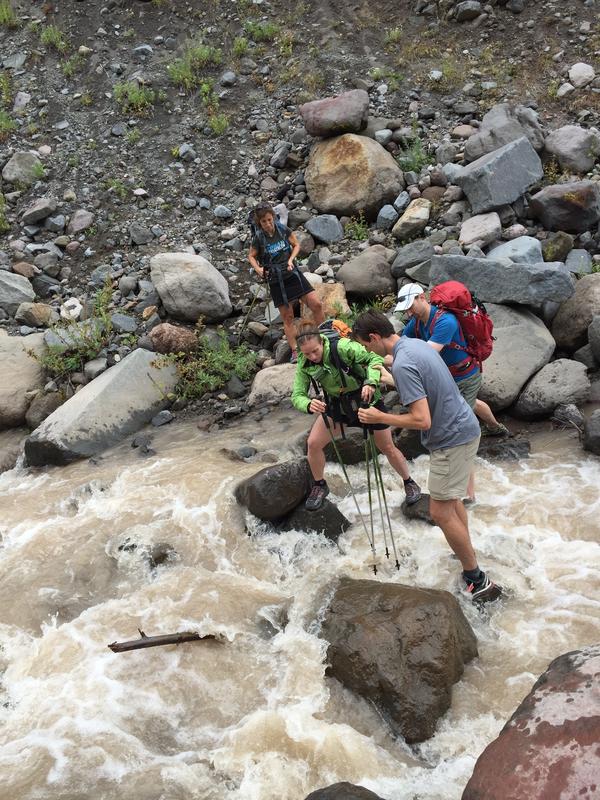 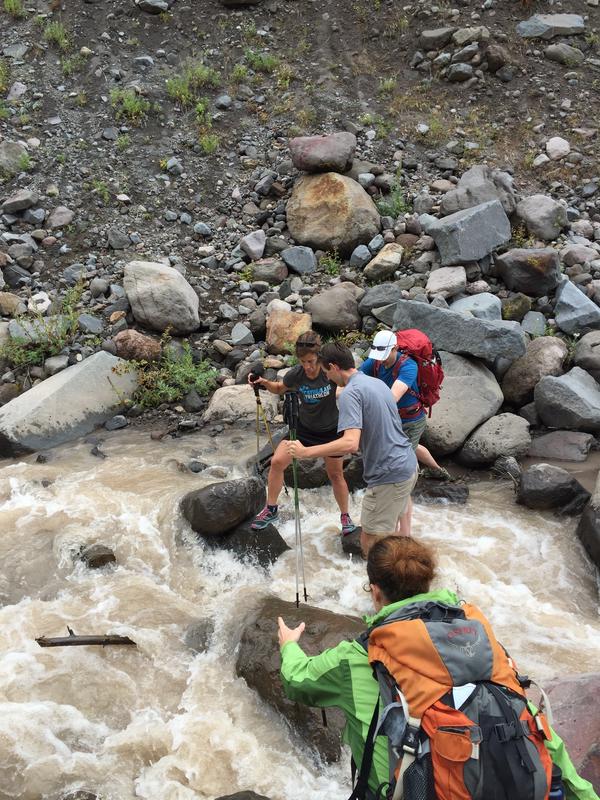 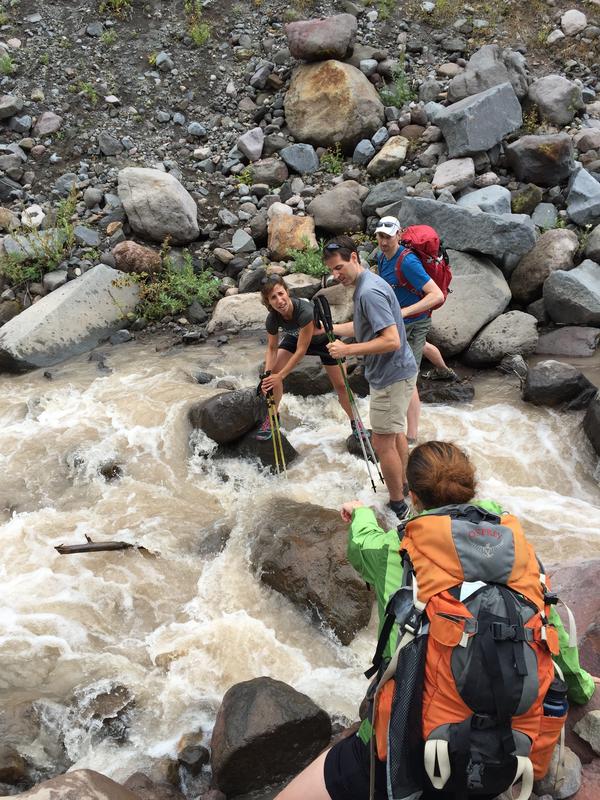 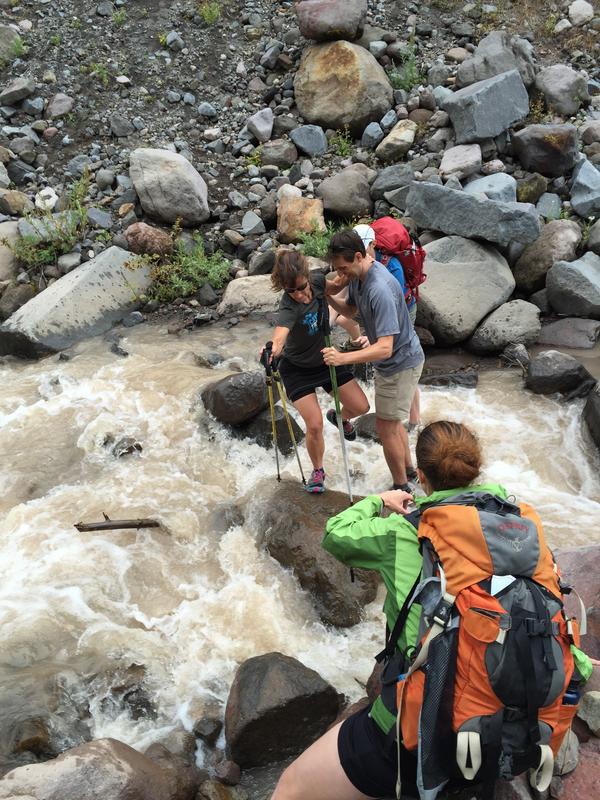 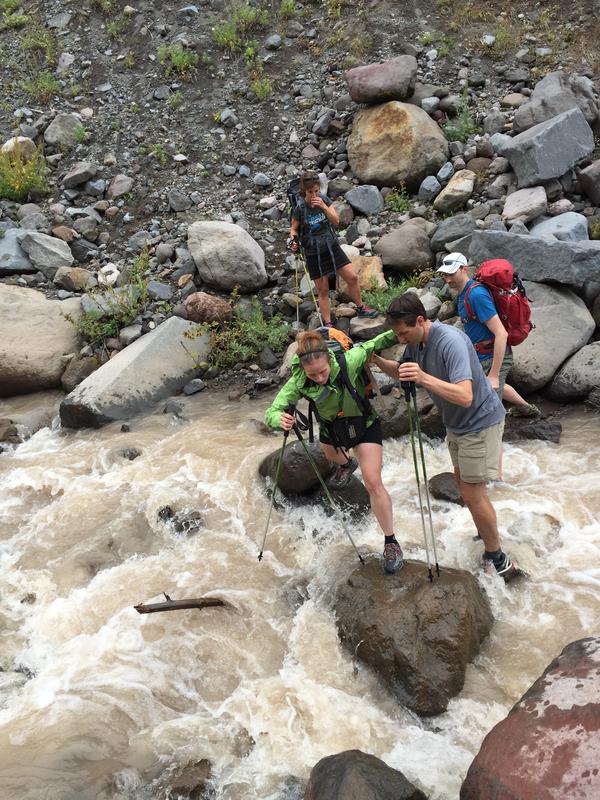 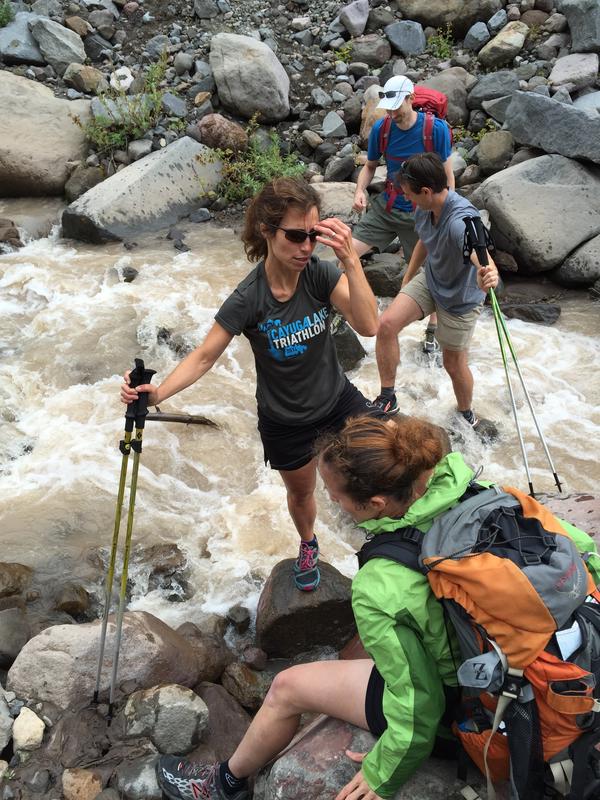 After we enjoyed lunch, we were ready to continue on the rest of our journey. We would take in glorious views of Mt. Hood in this portion. The fog had lifted more, and with it my mood also improved. This part of the hike was filled with laughter, great views and general gratitude for the fact that we had crossed the river successfully. We took some great pictures, stood on a ledge for a LONG while and savored the view. 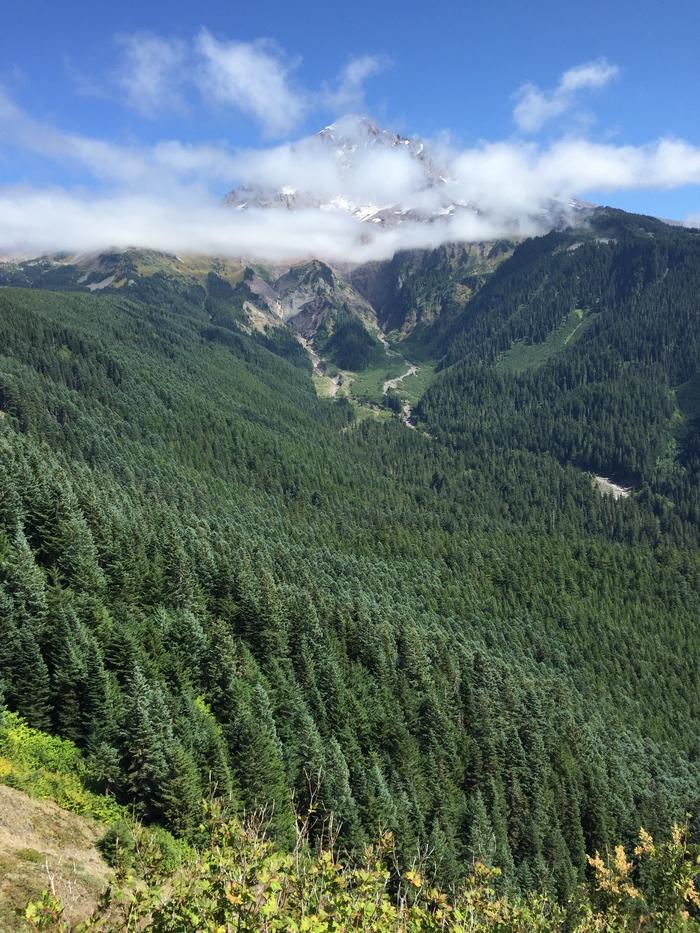 A view to savor 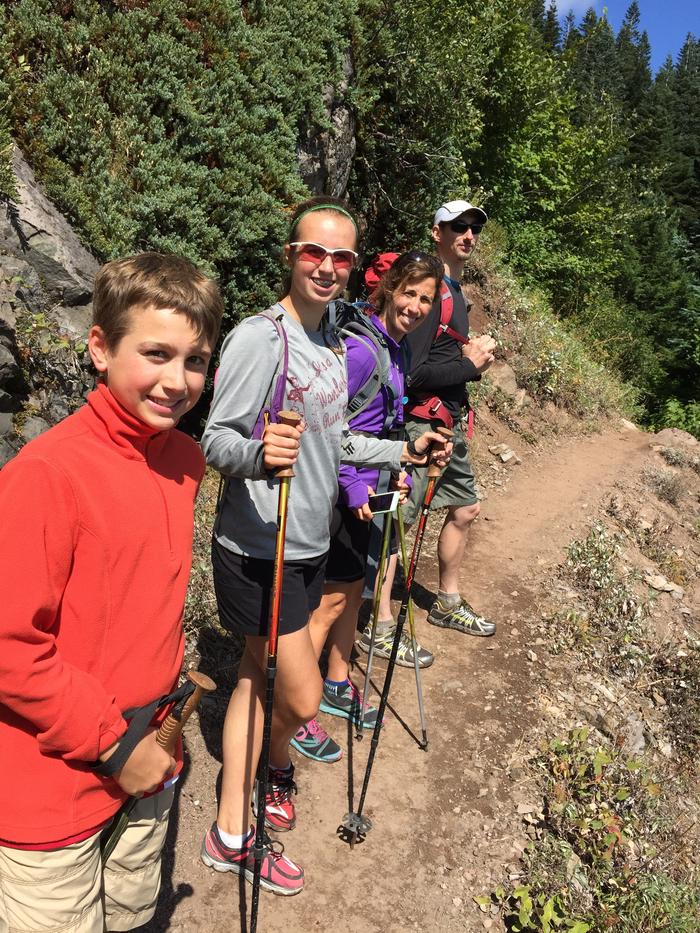 Scott got a neat video of the orographic lift that we were observing on Mt. Hood. He also posted this video on his own blog, as well as his recollections of the hike.

The rest of the story

The Muddy Fork crossings were amazing, but when I came home, the story I chose to share most often was about the final crossing. We were almost finished with our hike, and we were nearing one last crossing. After the first bridge was washed out, we figured that the same flooding could have caused something similar here. But, we marched onward as NO ONE was about to turn around and brave the 3 Muddy Fork crossings that we'd already done again.

Upon arriving at the last Muddy Fork crossing, we saw that the bridge was indeed washed out. You can see from our tracks that we walked around for awhile contemplating what to do. 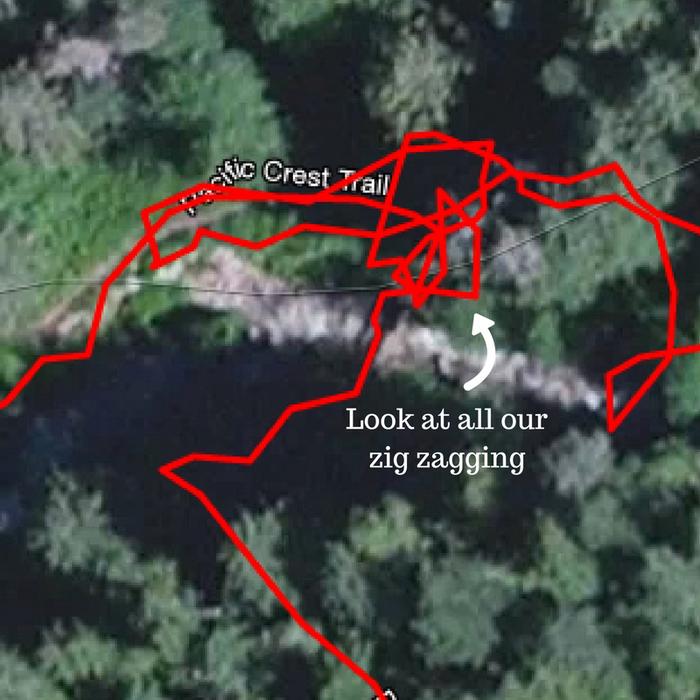 As we walked upstream, we found a log bridge that had been made. It wasn't ideal but it was doable; you had to shimmy along on the bottom log and hold onto the rope on the top log. Xander was small and we were a little worried about him, so Scott roped him up and they stayed close. 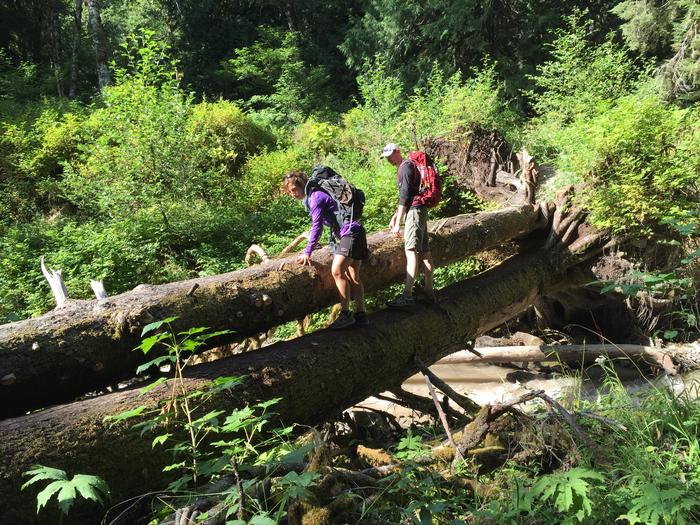 As we ambled back on the Ramona Falls trail, we took a few more pictures, talked a lot about our adventures and looked forward to our drive back to Portland. This hike was #69 in the 100 Hikes in Northwest Oregon. 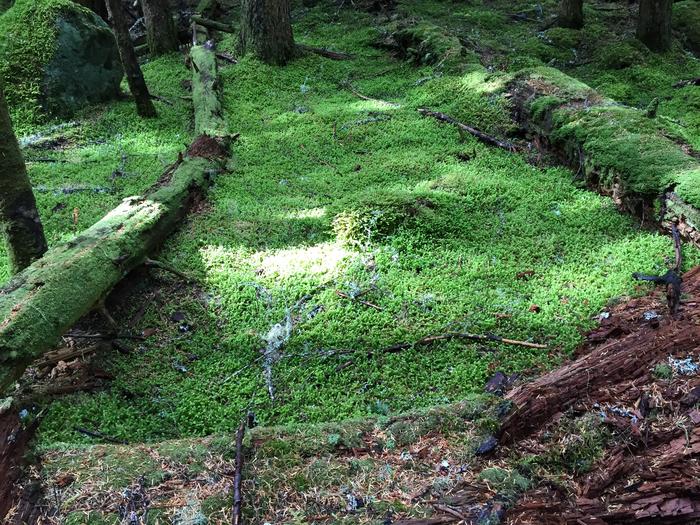 Scott used the Gaia GPS app for his iPhone to record our track. We spent 5:19 actively hiking the 15.2 miles but we were out there for 7:45.