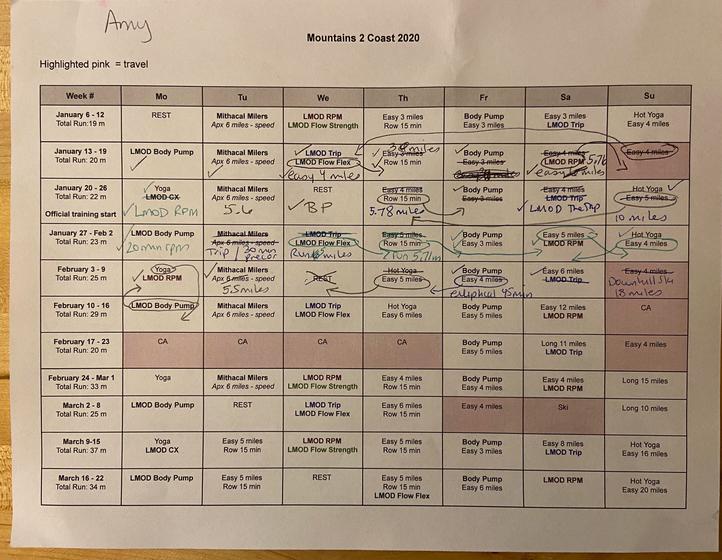 This was a weird workout week. It started pretty strong and then Scott hatched an idea for us to take a super fast ski trip at the end of Week 6 of training. That meant that this week we'd need to change some things since next week we wouldn't have time to do the 5 mile run on Friday or the 12 mile run on Saturday. He shuffled things around and it seemed to make sense on paper. I guess it did work out well on paper, but not really so much when it came time to complete the workouts.

The first part of the week was only slightly flipped around. My dad is starting to come to terms with the new normal of my mom not being here and so are we. We decided it would be a good idea to have him for dinner as often as we can which meant that Monday night yoga should be replaced by a home workout for me this week. I took BodyPump from the following Monday and threw it in on this Monday so that Scott and I would have time to prepare a nice dinner at a reasonable hour for my dad. Tuesday we did our MITHACAL milers workout and the kids had my dad to dinner. Things started fo fall a little downhill from there.

This Wednesday was one of the randomly placed rest days in my training plan. I finished the entire plan and then realized I hadn't budgeted in rest. Sure I had plenty of light days but no 100% off days of rest. This rest day is the 3rd day calling for rest in my plan and it would become the third time I skipped a rest day. I moved Thursday's 5 miler to Wednesday's rest day and then moved Friday's 5 miles to Thursday. Friday we had a snow day for school and it was a genuine snow day. There was no way I would be able to run on the roads. I subbed out elliptical and BodyPump on Friday for a run. Most of Friday was spent baking for my baking job, doing school work for my teaching job, and spending time with my dad. While productive, the day didn't feel that joyful.

Saturday was a chilly start and I had multiple cake pick-ups "mid morning" that day. Xander had to work at 10 so he headed out for his scheduled 8 miler at 8 am. He wore yak tracks and said he'd report back in for us. I mentioned to Scott that I might sub out an elliptical workout for my long run. My plan only called for 6 for the week, but we were flipping with next week so I was technically supposed to do 12. He made some comment that he swears was not to make me think I had to run, but I took it that way. Because Elizabeth was at a fitness class and Scott was taking Xander to work and given the uncertain timing of "mid-morning" for cake pickups, I spent 2 hours on the computer planning for school and then started work on an upcoming ice-cream cake. I knew one cake was being picked up at 11, so I figured everything would be out of the house by then and I'd be able to run. Right at 11 one of my cake pick-ups emailed to find out if mid-morning was still ok. She was sending her friend and wanted my cell number for the friend to confirm. Soon after the friend confirmed for 2 pm. Now I had a window of time to work out - from 11:30 - 2 before we headed out on our family ski weekend for this week. The other cakes were picked up moments after 11 and I was able to be ready by 11:30.

The trouble with the timing was that I was hungry, I was not really in the mood to run and I was inexplicably tired. Elizabeth was home by this time and she kept sharing small stories as I tried to get out of the house. It was entertaining as I had my air-pods in with my podcast already playing and she kept talking. There was a lot of pausing them before I finally said, "I'm leaving now."

The run was challenging from the get go. I haven't needed to run in yaks in a long while. I looked over at the golf course longingly. I'd really rather be cross country skiing. I didn't want to run 12 miles. Every 5 steps I'd get out of the slush and onto pavement and then the yaks felt terrible. Still, my podcast was interesting so I was mostly fine ... until it ended when I was just 3 and a half miles in. I switched the podcast to a new one and continued my slushy run. I really did think I could make 10 (I wasn't even shooting for 12 actually since I was on a 10 mile loop). Then abruptly on Main Street in Tburg I started walking and looked at my watch and asked Siri to call Elizabeth Dawson. It failed. My talking was slurred because it was cold out and I can't talk well when it was cold. I should have taken that as a sign. But, I tried again. This time I was successful. I asked her to pick me up at Not My Dad's Ice-Cream. "When?" she asked. "Now." "Are you ok?" "Yup. I'm just tired and not feeling great." True enough. Soon she arrived and we drove home. Of course Scott finished his 12 happily. When I got inside he said, "I'm going to row 10 minutes." My run was just over 5.5 miles of misery.

When I sat down to write this today I looked at what this week's plan had called for. In addition to the rest day Wednesday that I didn't take, it only asked me to do a 6 mile run on Saturday and a cycling class. I wish I had planned Saturday better and gotten the cycling in. By the time I finished the unsuccessful run we had just under an hour before we had to leave to get Xander, I had to greet my cake pick-up and get ready. If I had looked in the morning I would have cycled and possibly gotten farther in the run. I learned a few lessons with this today though.

After out family ski trip, Scott and I talked about next weekend. Whiteface is hosting the Empire State Games so it isn't wise to head there and this would be our 3rd weekend at Gore. That would be ok and we still might decide to go, but it is unlikely. We considered Killington but knowing it is a holiday weekend and remembering how crazy the lines can get makes us think we're better off getting our long runs in and enjoying the day. 10 hours in the car over a 24 hour period doesn't sound all that romantic!! We head out for a trip to LA next Sunday and put no running on the calendar for our trip but we know we'll end up getting some fitness in. That makes me feel like a slightly missed week of training is ok.

There are 57 other posts like this one. Here are some other recent ones: