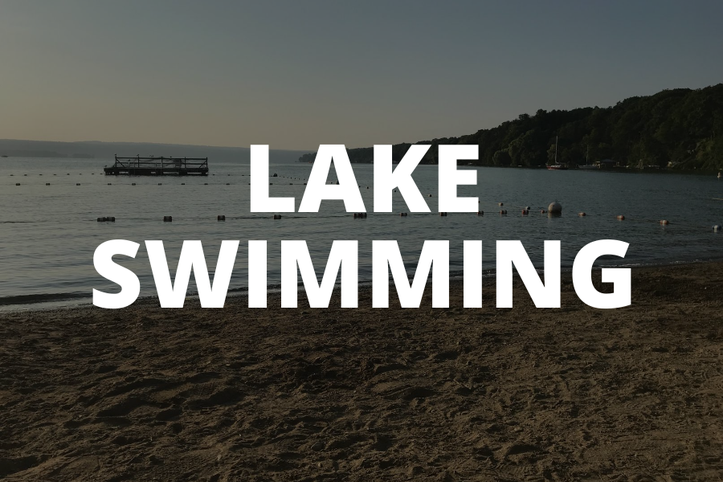 On Tuesday July 7th Elizabeth and her friend Alana wanted to kayak for me. Xander was again at his grandparent's pool enjoying the warm weather we've been having. We had just over an hour to squeeze in a 4th lake swim for me. My goal with this swim was to start at the dock and not struggle even once. Today was going to be my day for swimming success!!

"My mom hates to swim in the lake," said Elizabeth as we headed down to Kathey's house. I followed by sharing about my first 3 swims and assured Alana that I'd be on my best behavior for her today. Elizabeth and Alana have been friends for several years, so I know Alana reasonably well, but not so well that I feel like I can show her my poor behavior.

We started with the same routine. I set the tempo trainer to 1.34 and headed out. The lake was calm and clear. It was the first time since I started lake swimming that I could see to the bottom. I am petrified of seaweed and life of all kinds in the water. However, today I found the zen in this. I remembered Shane sharing his experiences swimming in Hawaii and suddenly felt that maybe I could be ok with that someday. I felt safe in my wetsuit because it acted as a barrier between the lake and me. I started to enjoy looking at the bottom, and enjoyed to watching the now familiar houses and docks pass by as I swam. Sighting went well and I wasn't zigging and zagging as much as before. Soon, we reached the stretch where there is one large property so there's not a lot to look at. This is the part that I always want to quit. It feels SO hard! I powered through and soon arrived at the turnaround point.

I asked Elizabeth to turn off the timer as I hung off the back of the boat, caught my breath and thanked the girls for coming out to support me. I was probably there for less than a minute when Elizabeth turned the boat around and we headed back. My time to get to the .25 mile mark was 11:31.

The return trip started off easy. I was so thrilled to hear that I had arrived in 11:31 that I briefly ignored my tempo trainer and swam at a faster tempo. Soon though I settled back into the rhythm of the tempo trainer. I worked on keeping my kick calm and snapping from the core instead of just using my arms. Docks went by quickly and I waited for the water to become clear again (it had become murky about 3/4 of the way to the turnaround). I don't know why I thought that the water would clear - it never did. But I learned from this that it actually IS easier to swim when you can see rather than being in the murk (I've been telling Kathey forever that I want to see NOTHING and she laughs and tells me I'm crazy).

When I was just over halfway back, I looked at the water trampoline in the distance. It is the last marker before Kathey's dock and suddenly it seemed SO far away!! I started counting strokes - 50 (look up and sight) and then another 50 and so on. This helped the time pass.

Just over 20 minutes of my life

"21:31" Elizabeth shouted out as I hopped up to the dock. Of course this time doesn't include the time that I hung off the back, but I wasn't there very long. I was on cloud 9 as I quickly pulled my wetsuit off. I can do this! I actually kind of enjoyed it - wow!