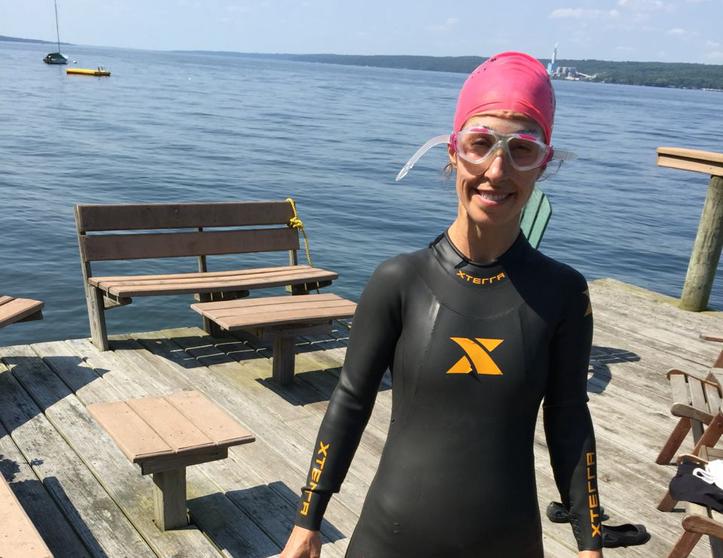 I've been writing about each lake swim for the past week or so. After having such a challenging time for the first time out and being pressed for time (the CLT is the first Sunday in August), I hit this hard knowing I am rapidly running out of time for my year of learning to swim. Since my last post, I've been in the lake a couple more times working on getting comfortable, not quitting and just getting practice.

I want to go back to the group swim, but I don't want to have to climb into a canoe again (unless I can't make the time limit). So, I need to be reasonably certain that I can make the distance before I show up. That's what today was for! Scott was out for his 2nd lake swim along the shore from Kathey's house and I would follow with a swim to the center of Cayuga Lake and the return to the dock.

Elizabeth and I kayaked for Scott and he had an AMAZING swim. He struggled a lot more than either of us expected on his first time out and I was so happy to see him swimming confidently today. His stroke looked very strong and his kick was great as was his patient lead arm - and he hasn't even taken lessons with Shane yet! He finished the distance in about 18:30. I admit I was jealous - hey I've spend almost a full year working on this and this is his 2nd time in water since last August! But, mostly I was happy for his success.

I actually felt excited as we approached the dock. It was my turn to put on my wetsuit and get into the water. Just before we went, we stopped at a friend's to try to talk her into joining us. She was swimming in her pool and I looked at the pool and actually thought, "I am looking forward to the lake." On the drive down, Elizabeth and I chatted about pools. I commented that I think if I were ever to really seriously want to swim at home I'd want an endless pool as it would simulate lake swimming pretty effectively. As I spoke, I could barely believe that these words were coming out of MY mouth.

"I'm amazing!" "Wow, this is kind of fun" were the thoughts  going through my head as I began to swim a mile in Cayuga Lake. The tempo trainer kind of faded into the background as my mind wandered about random things and then came back to trying not to splash so much on my kick. Time was melting away and I thought I must be nearing .5 miles (my turnaround point in the lake). I stopped for a minute and looked up to sight only to hear Scott shout, "Looking good! You are .25 miles in!!"

"Oh CRAP!" I shouted. "Really???" "That's all." Before we started, Elizabeth asked if I really had to go a full mile. I said, "No. I might not. I just want to get out in the lake instead of along the shore. I need to know I can do that." After that Scott said I'd been swimming for 11:30. "That's it huh?" "I don't want to swim anymore." I mumbled. They reminded me that I was looking great and that was pretty spot on for timing for me. I grudgingly agreed and started off again. The next time I surfaced long enough to listen to them he told me I'd hit .44 miles. Now I knew I could make the turnaround!! I had a mere .06 to go before they'd tell me it was time. I arrived at my halfway point of .5 miles at just over 23 minutes; still not fast by any means but something I could be proud of.

A beautiful Saturday afternoon, one of the first nice days of summer and you can imagine that there were A LOT of boats out and about. The water was very murky from the recent rain and I couldn't really see anything. As I started back the water felt choppy and I started to feel like I was being tossed around in a washing machine. At one point a boat came by behind us and I looked forward to the waves that would push me toward shore. Just moments later though a boat came from the other side. I got tossed around and started to think I'd never make it back.

Just the Kayak and Me

While swimming along by shore you can see docks and houses. Once familiar with the route you always know roughly how far along you are and what is coming next. Heading into the middle of the lake was completely different. It was peaceful in a way that swimming along shore is not. It was just me and my kayak out there keeping me safe from boats. I could see nothing but the boat. Scott and Elizabeth were my moving buoy - my sightline. I felt completely safe with them by my side.

The Dock at Last

As I approached shore I could see Kathey, Bruce, Mitch, Molly and their dog Finn on the dock. They were cheering for me!! I had arrived. It took me just over 47 minutes to swim 1.01 miles out to the middle of the lake and back. It was challenging but also A LOT of fun! I am so grateful to Kathey and Bruce for letting me swim from their house and to Scott and Elizabeth for giving up almost a full hour to saunter along with me.