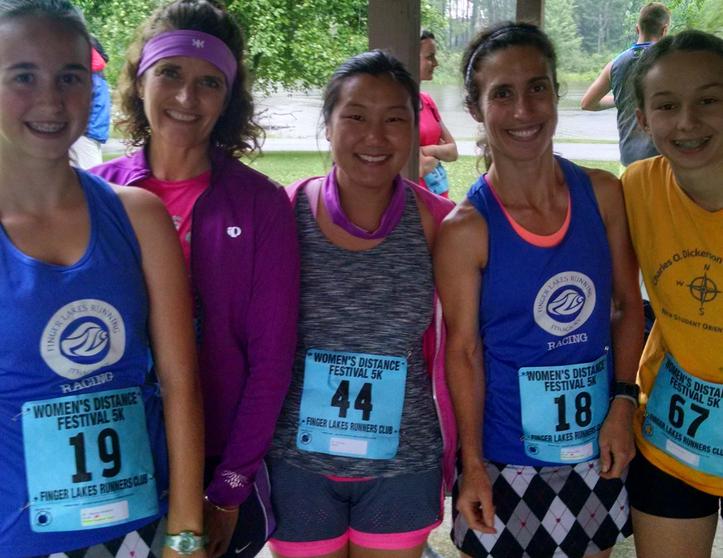 The Women's Distance Festival is a summer highlight for Elizabeth and me. This year we signed up as "The Loping LizERDS" for a mother-daughter team. Elizabeth's initials are E.R.D. and people keep trying to call her Liz (something that drives her CRAZY) so our family started calling her "lizerd" for fun. Elizabeth has been running more for cross country pre-season, and I'm in decent shape from training for the CLT and the Wineglass. As such, we thought we might win a mother-daughter award.

My friends Anne and Deidra from swim class signed up for this and so did my friend Brenda. It has also become an annual thing for Brenda and this was Anne's 2nd time running the race.  Elizabeth invited her friend Jessica to join us too. We talked about going out to dinner afterwards (Viva of course) and Elizabeth and I bought race shirts (Normally they give them to the first 100, but this year they had them as something to purchase. We always look forward to the shirts, so just decided to buy them.)

The race starts at 6:30 p.m. in a local park in Dryden. Every year it has been hot and muggy and sunny! A tough course at a tough time of day, the spirit of the group makes it worth the challenge.

The forecast for race day called for rain. A LOT of rain. Thunderstorms were also possible. Deidra emailed to see if they would cancel for thunder and Anne texted to make sure we were still game if it was raining. Elizabeth and I chose our only warm weather twin outfits and headed out to pick up Jess. The rain ceased right before we left, but by the time we hit Ithaca it was really pouring again. As we passed the High School we heard thunder in the distance so we started to speculate whether they'd have to follow soccer rules for thunder (waiting 1/2 hour after each time it is heard or lightening is seen), how close the storm had to be to worry etc. Headphones are banned in this race, and we laughed that it didn't much matter since it was POURING. Obviously even if it were a headphone legal race we wouldn't be wearing them. I asked Elizabeth to give us some good race tunes for the drive. She obliged, switching back and forth between my playlists and hers (making fun of my songs when they came on - it appears in my eagerness to find songs I've never heard, I unknowingly picked some that were from Dance Moms).

As we lined up in the pouring rain we chatted with the ladies around us. A mother-daughter team chatted with us, pointing out that we were a team to beat. A woman behind me asked me how fast I was going to run this and I told her I was hoping for 25. She wasn't sure how to pace herself, so I told her to rely on the mile one split shout out. She could adjust up or down based on how she felt at the mile.

Elizabeth and I had talked about the fact that we could possibly be the same pace for this race. We've never run a 5K together - we just show up and run our own race. She was cool with us running together if it happened to work out that way, but we agreed that we wanted to try to win a mother-daughter award so we wouldn't plan to run together.

The gun went off. I hadn't run the day prior and my legs felt really springy. I was zipping along at a 7:30 pace on the horse trail. It was lovely! The rain was great fun and the ground underneath was pretty good. I caught up with Elizabeth about 3/4 mile into the run. I hung with her for a few steps and continued on. We hit the one mile there were no splits shouted (it was POURING after all) and I thought of the woman who was worried about pacing.

Soon it was time to start the uphill slog. I was running next to the mom from the mother-daughter team that we'd chatted with. She had just run the Finger Lakes 50s the week prior, so I had a reasonable shot of staying up with her because her legs were probably still exhausted. We talked a bit, and I focused on keeping my contacts in my eyes by putting my head down slightly. The rain was driving straight into my face. Ian was out at mile 1.5 with water. We waved and he cheered as we went by, joking that we could drink from the sky instead of a cup. This stretch was uneventful and rather easy. Looking back, I wish I had checked the average pace on my watch and picked it up a bit. I was trying to run by feel and not look at how I was doing. Last year I got a cramp at the top of the hill, and that was still in my memory. As we crested the hill, my running mate stopped to tie her show. Now I was alone. I wasn't even sure what pace we were running, or whether I was pacing her or vice versa. "Crud" I thought, "Now I have to pay more attention to my running." I looked down at my watch and saw that I was 1.8 miles into the race. "Wow, a 5K is SHORT, I'm almost done" I thought.

Soon I saw the last hill in the distance and suddenly I heard footsteps behind me.  I pulled it out and started to pick up the pace for the last .3. By this point my skirt was SOPPING wet and felt much like I think a diaper would. I was ready to be done. I sprinted in with a strong finish to a 7 second course PR. 24:45 and change. I scolded myself for not having the watch set to average pace - I knew exactly what that number needed to be to have a real PR. But, with the rain I hadn't even contemplated one until it felt so fun about 3/4 mile in. 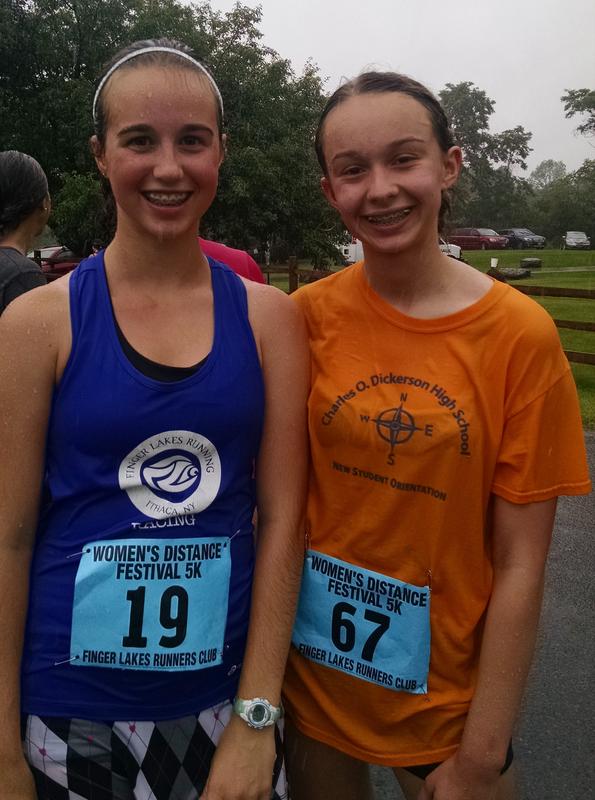 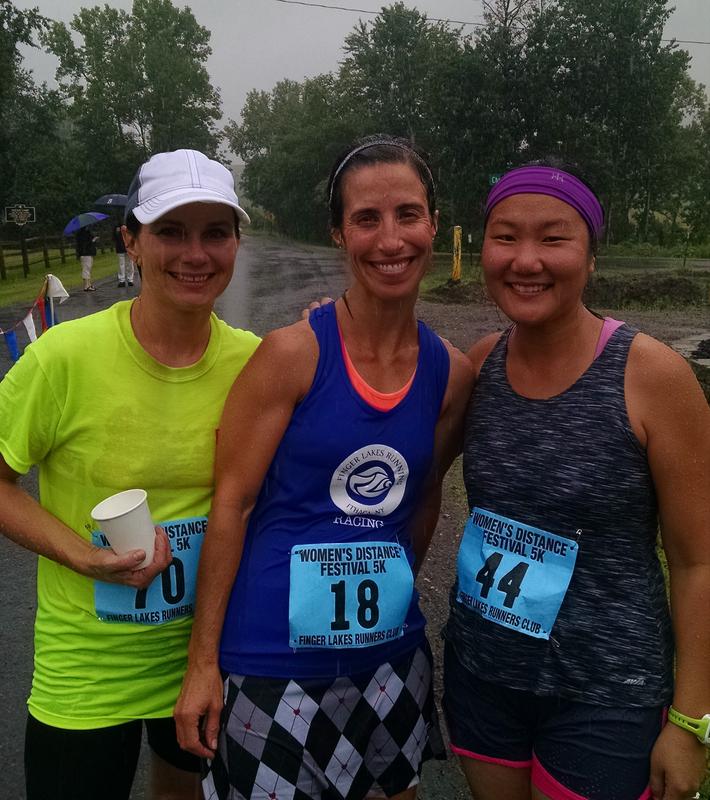 I planned to run the course 2x like I did last year and turned around to head back. However, soon Elizabeth came through and I wanted to cheer her on. Then, Brenda and Anne came through and soon after that Deidra and Jess. It was so wet and I opted to just enjoy the post race camaraderie.

After the race, the girls headed to the car to change into dry clothes. I hung out with the ladies watching people finish. After the girls were done I headed down to the car to change. I had managed to get dry jean shorts on and switch my shoes when I heard a knock at the car window, "Mom, you won Masters!" "Awards!" I headed back up in time to hear Elizabeth being called out for winning her age group and Jessica placing 2nd. We waited for mother-daughter awards and we didn't place. The mom I'd been running with - her daughter was blazing fast and they took 1st. A little girl and her mom came in 2nd. Even with the rain, this was another great year for the Women's Distance Festival.