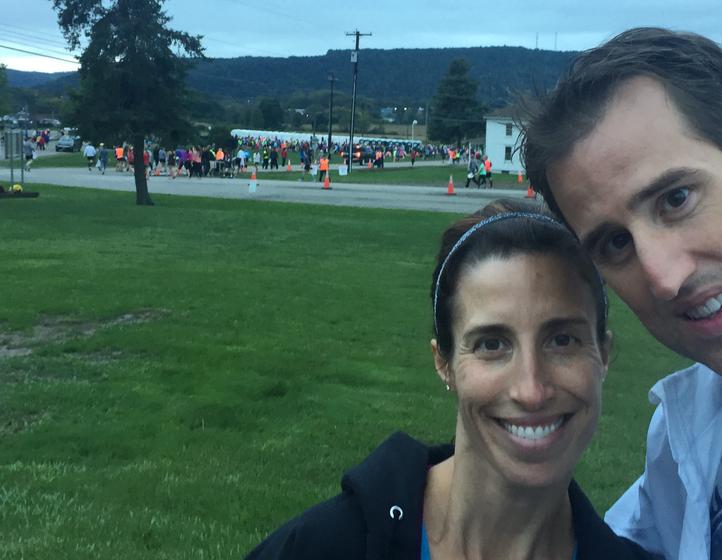 A week prior to the race I pulled my calf. It happened in increments really. First, a bike ride and my calf cramped when I unclipped at an intersection. Then, it was tight the next day. Later that week, I ran my first cross country race and later that day it fully gave out on a hike with Elizabeth. As we finished the Taughannock park rim trail, I dragged my leg behind me dejectedly. When I came home, Elizabeth used the stick to roll my calf out, and we began to prepare dinner. I hobbled around the rest of the night, and the next morning made a poor choice to attend 6 a.m. BodyPump. As I was limping from the car to the gym Elizabeth said, "are you sure this is a good idea?" I replied that I was certain that it was not in fact a good idea, but went to the class anyway. That night I realized that full on rest was my only chance for running the marathon Sunday.

A week of Epsom salt baths, a massage, lots of self massage and yoga and I thought I had a reasonable shot. I did a shake out run on Saturday and felt ok. Sure, my calf was still a little tight but I decided to give it a go!

Two days before the race, I had a back and forth with my friend Darryl on Facebook. Darryl and I had "met" after he read my blog about swimming. He has an amazing story of injury and recovery, and we have since shared exchanges about swim challenges, goals for races etc. Rain was in the forecast. If it was pouring should I wear a tri suit? Would that feel ok for 26.2? Run with my phone or no? Music? It took a day and a half while the forecast changed a millions times and I finally settled on my lucky Chevron printed skirt, a purple tank top, calf sleeves and no visor. I also decided NO on music and NO for my phone. This would be a tech free race.

After you run a few marathons everyone wants to know. Are you going to try to BQ? Hit a sub 4? Have a new PR? Scott was going to try again for a BQ. Darryl was going for a sub 4. I was hoping to finish, but more than that I thought I would like to run even splits. In my past 4 marathons I've started with an overly ambitious pace only to fall off after mile 20. I felt it was perfectly reasonable to hit a sub 4 since my other 4 were, and decided that I'd work with the gradual downhill and go for just under 9 minute miles. 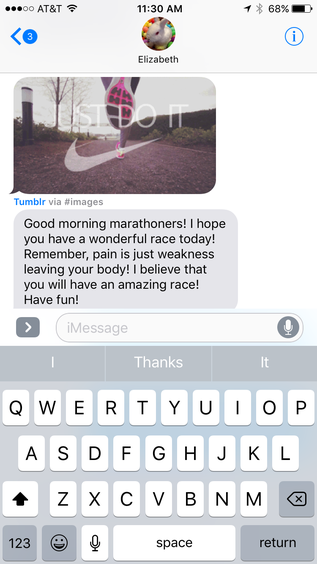 Scott and I fell into bed before 9 on Saturday night and popped up easily at 4:30 Sunday morning. We had our normal race day morning routine; coffee, a short TV show, hung out with our rabbit, packed some breakfast and we were on the road. On the way, we received a text from Elizabeth. She didn't have to wake up early today but she set an alarm to text us good luck!

We arrived, hopped into our bus line and before we knew it we were on the bus to the start. As we walked by the music I said to Scott, "This is the only music we'll hear until the end of the race!" We waited for porta-potties, met some people and generally just enjoyed the pre-race atmosphere. I was less nervous than Wineglass 2015 when I was going for a BQ time (which I didn't quite do). But, I knew Scott was really nervous. We got into what turned into be a too long bathroom line, exiting shortly before the National Anthem. I wandered over to the start and started looking for Darryl near the 4 hour pacing group. We had shared our attire plans with each other so we'd be sure to spot one another. I was looking for black calf sleeves, gray shorts, a white visor and white sunglasses. Really how hard can that be? I looked and looked but no luck. We weren't destined to meet up today. Soon it was race time! 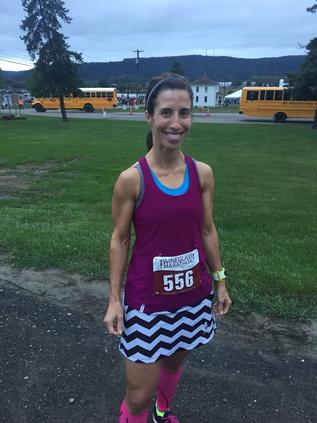 I settled into a comfortable pace. Determined not to go too fast, I hit my target pace early on. I was near the 3:55 pacing group. As a general rule I try to stay away from pacing groups because I don't like to run with a big crowd and I'm not easily motivated by others. This group included one gentleman who kept clapping 6 times in a row. He was cheering everyone on and I'm sure that some people enjoyed that. I longed to go back in time and make the choice to run with music! Two ladies were running near me and they were trying desperately to slow down to stay right with the pacer. They kept stopping in front of me and then dropping back. Minutes later they would speed by.

I felt my first calf pain 2.7 miles in. I willed myself to forget about it. I would finish this race. My splits stayed even, my breathing was steady. I can do this I thought. My calf will be fine. And then, it wasn't. By the end of mile 8 every step started to hurt. I could feel myself compensating and changing my stride. Should I walk? Stretch? Slow down?

I wasn't tired, my calf just hurt. I kept running, and started to see my average pace go up on the GPS.  I walked through the water stop and tried to run again. So much pain. I walked some more. Then, another attempt at running. More pain. I knew a medical tent had to be coming up, probably at the 13.1 so I kept limping along. While walking, I tried to decide whether to limp the entire race, try to run/walk through the pain or stop.

Time to stop, or carry on?

I was still deciding what to do. I didn't have a phone. If I were to finish this I would potentially be out there til after the course opened up. I hadn't paid attention to course closure info because I didn't think I'd be out there long enough for it to matter. Scott would be worried about me. Xander wouldn't make it to his service project at 3 pm. Elizabeth needed us to pick her up at a golf match she was spectating. I should stop. I started having a dialogue with myself.

If you stop you won't get a medal. You will have to tell everyone you quit. But you are injured. You are running NYC marathon with Jenny in a month. Is it really wise to keep running on an injured leg? Scott will worry about you. You don't want him to worry, do you? The med tent has to be up here somewhere. If it looks unfriendly just go by and stay on course. If they are friendly you can stop.

As I walked, HUNDREDS of people passed by me. I saw the 4 hour pacing group go by and thought I spotted Darryl but I wasn't sure. They looked strong and happy. Soon the 4:15 group came through, chatting away. There was a smattering of phone alerts as we hit mile markers. Many racers had signed up for runner tracking and their phones were alerting for current pace, average pace, projected finish etc.

Before long the 4:30 crew passed me and I was intrigued by the different personalities of each of these packs. Some groups had people on the phone with loved ones sharing their story as they ran, gear varied so greatly, and there were so many fun shirts. One of my favorites said, "what happens at mile 20 stays at mile 20."

I saw the sign saying that there was one mile to the med tent. I was nearing the half marathon point. Donuts and coffee were available for runners on the side of the road. A bunch of people headed over to partake. I looked at my watch "2:15 and change." Ironically I was going to be just a bit slower for this half that included 3+ miles of walking than I was on my first half when I had run the entire distance. At least I made it halfway.

They did look friendly. I walked right up to the guy with the clipboard and said, "So, what do you do if a runner has to drop out?" He said, "go stand with this guy. We'll take you back to the finish." We waited for awhile, watching the groups go by. It was actually fun. Bandaids and BioFreeze were the most needed things, and it was great to know that they had help for those who need it.

Before long 3 of us climbed into the transport vehicle, joining the one woman already there. It was a steady stream of chatter as we all shared our stories. The driver was friendly as he navigated the race course to bring us to the finish. We were all sad, but we all agreed that we made the right decision for each of our respective situations.

As we arrived back at the finish, we all hobbled out of the van. During the drive we'd stiffened up and it was probably a sight to see us limp out. I said farewell to my fellow passengers and I limped as quickly as I could to get my bag from bag check (I was freezing!) and then went to the finish line to greet Scott because it was about the time he should be finishing.

I arrived at the finish just in time to see Scott exiting the chute and entering the food area. He hit a PR but had missed his BQ. He was devastated and so sad to see me there already. It was an hour wait for a massage for him so we decided to skip that and head home. I drove as Scott stretched out in the back seat, barely conscious. Interested in his race? Read his race report.

Thoughts about a DNF

I am person #3 in my family to have a DNF in a race. Scott experienced this in the Finger Lakes 50s last year due to injury, and Elizabeth passed out during her first Cross Country race this fall (we think due to low blood sugar and excessive heat). Not being first made it a little easier to take. Everyone was compassionate and fully understanding. I don't feel great about having to drop out but I am happy that I was able to make the choice and not further injure myself by being stubborn about finishing.

We'll see what next year brings. It will either be a bit of a break from marathons or time to go for BQ again. I'll be able to qualify with the 45-49 age group  since I'll be 44 by then, SO that just might make it worth the attempt! I get an extra 10 minutes, so I will need a 3:55 to qualify and probably a 3:52 and change to actually run the race.

Darryl hit is sub 4 goal!! I didn't get to see him at the race but it was right there in the results. Congrats Darryl!!