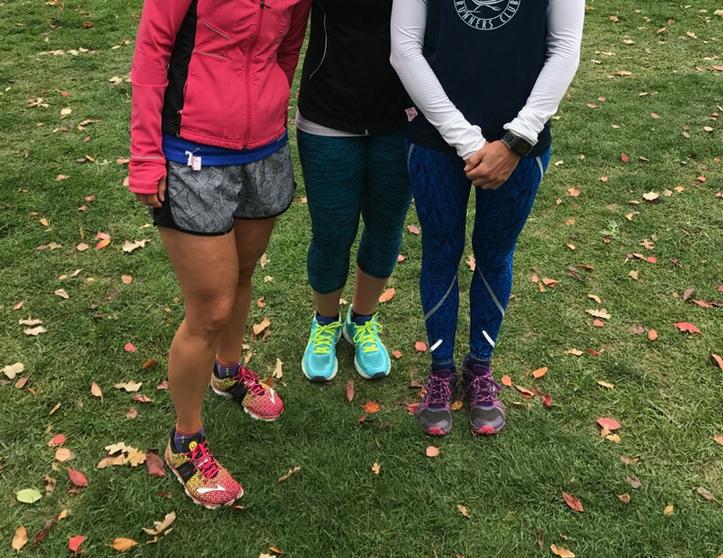 This is my first race since my calf injury at the Wineglass Marathon in early October. I've been very careful about coming back to running after injury, taking a full 2 weeks off from running before easing back slowly in. The New York City marathon is in 2 weeks, so I'm following the last 3 weeks of a Hal Higdon plan now to prepare for that. Jenny and I only hope to have a great time and to finish, so it won't be a race, but my body does have to be healthy to run the 26.2!! That means being careful in this race, and hitting 12 miles during the day to make my training goal.

After my first cross country race, I felt like this was something I'd like to do more of, but at the same time I felt wholly unprepared to participate. For this race, I carpooled with Brenda and Liz and as we neared the race, I whined a bit about how I didn't really think I was very good at this. I shared that I felt stressed about it, not terribly motivated while actually on the course, and yada yada.

We arrived with about 40 minutes to spare. We hit the bathrooms, checked in and found our tent. Minutes later a group of us headed out for a warm-up run. This course was in the same place as the famous McQuaid Invitational race that the HS boys and girls competed in earlier this season. I've been there once to watch and felt really intimidated. The course is all on grass, and I was really nervous about that!!

Our warm up was good though, and I liked the course. There was one, "friendly hill" that we'd do twice because it was a looped course. It was cold and windy and it had rained a lot two days prior, so I had planned to run with long sleeves under my tank and leggings under my shorts. I'd worn trail shoes for the mud. I realized during the warm-up that this was a bad plan. I quickly took the extra layers off and wore just the tank and shorts. The mud wasn't bad at all, so I switched into my more comfortable Brooks Pure Connects (a side plea here, Brooks please please bring these shoes back)!

We shared goal paces and headed to the start line. Tonya was shooting for an 8:30 like last week. I told her I'd try to stay a bit behind her, wanting to be cautious with my calf. In the back of my head, I knew that she'd go faster than 8:30. It was cold, windy and the course was flat and fast. I suspected she'd hit an 8 or so and I decided that 8:16 was my goal.

We lined up and soon the gun went off! It is a wide open start and then you funnel down into the path. Unlike last time, I had my Tom Tom so I knew my pace. Cautious to keep Tonya in sight and to keep my starting pace reasonable, I settled in toward the back of the pack rather early. My first mini loop was enjoyable and soon we were heading up the "friendly" hill. I adored this hill. I always remember my sister Sarah's words about hills, "equal effort" and kept focused on this as I increased my arm momentum to get up quickly. When I reached the top I was rewarded with a delightful little downhill. It was shallow enough that I could gain speed on it and I passed a couple of people.

Soon I heard our male team mates cheering me on. This gave me a boost and I started thinking, "yes I do like this" followed by, "maybe I can get better at this." Note to self: cheering does help me - just not on what feels like an impossible hill like at the last race.

This was a 6K and my last race was a 5K. There were no kilometer markers so I was happy to have my GPS. On this loop, my stomach started grumbling like crazy. I had run 4 miles that morning before breakfast, and then come home to a delicious pile of scrambled eggs with spinach and sausage prepared for us all to dine on. That was around 8:15, and our race time was 11:40. Typically I would have had a snack before the race, but somehow I just forgot about that. I ate half the granola bar I packed right before the race started, but it wasn't enough to push hunger out of my mind.

So, around 4K into the race my brain became very focused on this hunger, how tired I was, how few people I was ahead of etc etc. I decided no negative self talk would be permitted and had a few mantras. They included;

I repeated them in my head rapidly focusing on increasing my cadence. There were 3 ladies in front of me. My goal was to pass each of them. As I caught the first woman she said, "good job" and I told her good job too. She said, "you are the one catching me." Then, I caught the next person. I could see her cadence was slowing down. She was tired. I could stay ahead of her if I passed her. Soon I realized we were in the final .2 when I looked at my watch. Someone on the sideline yelled, "FLRC stop looking at that watch and RUN!" Yes it was time to sprint this in. I ran in hard, passing the last person just before the chute started.

It was most amazing to have a GPS. But, I'm not yet sure if it helped me. My first race was an 8:23 pace and this one was 8:17. Basically this is apples and apples considering the other course was more challenging, BUT it was for a longer distance as well. I think what the GPS did for me was mostly emotional. I was able to settle into a pace with a full heart instead of feeling that panic of "how fast am I going?" If I hadn't had my GPS I would have thought I was running an 8:40 pace based on thinking Tonya was running an 8:30. That would have been fine, and maybe I'd have been pleasantly surprised at the end, but I don't know. One thing that regulating my pace did for me was to give me energy at the end to have a strong finish. At my first race, I don't have the benefits of the splits, but I knew that Tonya was behind me until she caught and passed me near the end. I started fast and slowed down. At this race I was steady and confident and more emotionally balanced.

One of the best things about the PGXC series is the fringe benefit of carpooling. It seems like it wouldn't be a big deal, but it is big for building community. The last race I went with Brenda and had a great time catching up with a friend I don't get to see very often. This time, Liz joined us and we all got to know each other better.

We talked about podcasts, testing your aging by telomere length testing and the resulting potential effects on health insurance etc. We talked about running and our own goals, shared TV shows and more. This is one of the big reasons I wanted to sign up - for that camaraderie that is sometimes hard to find as an adult.

I appreciated the general group vibe at the race and I remembered my teammate's names!

There is one last race in this series and it is at Cornell. Elizabeth is hoping to come watch and cheer me on!!