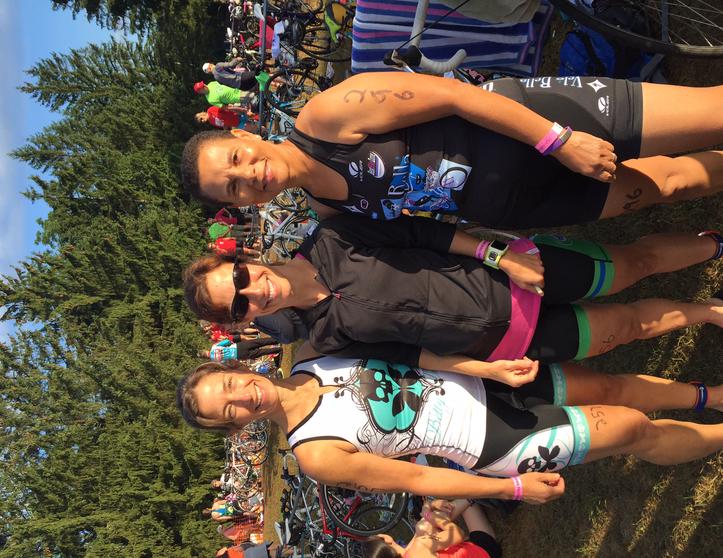 I'm In for the Gillie Girl Triathlon!

My friend Lynn LOVES the Gillie Girl triathlon! She talks to me every year about signing up and my contention is that I'm not good enough to travel for a race. Scott and I do the Cayuga Lake sprint triathlon every summer and I usually do the Tri for the Y in Ithaca as a warm-up race for this. However, this year I'm training for the intermediate distance for the CLT and my friend Katie and I have also been talking about signing up for a race together. Katie has also done the Gillie Girl triathlon and enjoyed it. After looking at our calendars, Gillie Girl was the one that worked for us both so we picked it!

I've been doing pretty well with training for the intermediate distance triathlon. Originally I was writing up my weekly plan, but then as things got busier and busier I started trying to just do whatever my husband was doing to train. I figured if I could match his workouts I'd be ready. I got into the lake on July 5th and have been in several times since then. Even after a full year of Total Immersion swim lessons with Shane Eversfield, swimming is still the event that I need to work the hardest at, so I must be diligent about preparation.

While not incredibly enthusiastic to willingly travel for a race, I decided to stick with the plan and participate in the race.

The Gillie Girl organizers sent us a final email the week before the race. It was filled with everything we needed to know. I appreciated all the information and quickly asked Lynn and Katie if either of them could pick up my packet. Lynn reminded me that I needed my ID and I'd get a wrist band and all that jazz. Oh yes, another reason I don't travel for triathlons - the added trip for getting my packet. Yes, I'm one of those spazzy people for whom race morning pick up is just palatable. Luckily Lynn was heading up on Friday and she was willing to have a passenger. I've been driving Elizabeth to golf things all around the area lately and I wasn't jazzed to have a solo drive to get my packet so I was very grateful to Lynn!

As it turned out, Katie was planning on staying with friends in Syracuse the night before the race. I thought Lynn's family was going up to watch and I was pretty bummed out about traveling alone to my first out of town triathlon. My family had other plans so they wouldn't be joining me either. So, I considered just not going because honestly I wasn't married to the race and figured I could work out here just as easily. However, I asked Lynn on the off chance that she'd want to ride up with me and she said yes. I was so excited to have company for the ride up and to have the moral support for a new race for me.

One thing that is nice about these early races is that I always get up at 5 anyway. My alarm went off at normal time and I had plenty of time to get things together for the drive. I packed my bagel and peanut butter, coffee, water and some raisins and headed over to get Lynn at 5:40. We had a really smooth ride up and got a great parking spot right near the event. Our friend Gilly parked next to us so we chattered a bit before going to get our bodies marked for the race.

Lynn helpfully guided me around and explained the swim course, scoped out a place for us for transition etc. This transition area was a lot different than the Cayuga Lake Triathlon. There were no numbered spots so we just picked our own. I liked this because I was near a friend and because I could pick a spot that I could easily remember. I didn't like the first come, first pick approach because I was afraid we'd get a bad spot, BUT we got a fine spot and it all worked nicely.

Soon Katie texted that she was there and we got a group picture with friend Cynthia, whom I only met recently at my first group cycling ride, and then we walked over to the water where Lynn snagged a picture of Katie and me. Before we knew it, there were pre-race announcements and the race was about to start! Time flew by!

As I stood there on the edge of the water I contemplated how far I've come with swimming. Just a couple of years ago, I started the swim for the Cayuga Lake Triathlon and totally freaked out. After briefly considering quitting, I flipped to my back and did the entire swim this way. Now, thanks to one year of lessons with Total Immersion coach Shane Eversfield I actually enjoy swimming. I can swim more than a mile comfortably and do so several times a week.

Still, all the practice in the world doesn't take away the anxiety of swimming around that many people! This swim has no buoy lines like I'm used to in the CLT. We swim from one large buoy to another and then to shore. There is a brief out of the water stint and we pop back in. A couple of years ago I think I would have panicked about this, but today it made me feel a bit stressed but not overwhelmed.

Knowing I'm a slow swimmer and not wanting to be passed by everyone, I started in the middle on the edge. I got into a rhythm pretty quickly and was able to sight well. As I swam I thought of Shane. I really can't express how grateful I am for the time he spent teaching me. The difference between swimming now and before his class is drastic. During this swim there were times where I thought, "I don't like being close to this many people," and "I wish I wasn't in this lake." But, I never felt panicked or like I couldn't dot even once.

I looked at my watch as I came out of the water from the first loop and it was 7 minutes and change. At the exit of the swim (where the transition pad was), it was 17:50. I never inquired about how the distance split out for loop one and loop two, but if they were even my first split was faster than my 2nd. It felt faster, but Lynn thinks that the 2nd loop is slightly longer. If so, that makes for about even splits. My recorded swim time was 16:44. I'm not sure if something went awry with timing on this race because I could almost swear that the first time I looked at the results everyone was about 2 minutes slower (my time was 20 and change and I was annoyed that I must have shut my watch off early). I'm perfectly happy with a 16:44, but feel like it means that this swim is short of being an 800 meter distance OR the bit of time on the sand really speeds things up!

My swim to bike transition was one of the worst in the field (2:24). I actually compared my transition time in the results and I was 90 out of 286. Only two of the people who placed in front of me had a slower transition time than I did. This was a great reminder that transition times matter. I hadn't worn a tri top and decided that it is important to save that step of putting on a shirt to bike/run in. I also need to switch belts - my running belt that has pockets to hold things requires that you snap the number on after you clip the belt together and this is challenging to do. Lesson learned!

I hopped on the bike after my long transition and was immediately happy with how flat and smooth this course was! My pace was fast for this as I started and I really enjoyed the ride. I was passed by one woman from the wave ahead of me, and then I leap frogged with a woman from my age group several times. I passed a lot of bikers but these two are the only ones that passed me that stuck out (I could have been passed by others and not remember).

The splits have me at 45:45.8 but my watch was 49 and change. I do believe my watch is correct as I started it after I crossed the start pad and I swear I stopped it promptly. Plus, a split of over 18 mph is very unlikely for my riding history.

After the race I talked with Scott about my time and how I raced. I shared that whenI saw the average speed increase I'd slow down thinking I couldn't maintain that for the duration. He said he's been riding without average speed displayed so that he just rides what he feels comfortable maintaining. I do think I shall try this for my next training ride and see how things go. The power of the mind is so strong and just thinking you can't or can do something can really make it happen!

There is no time listed for transition 2 in the results, BUT the first time I checked the results it was listed as 2:28. I think that they just added this to the run time (see below). I fiddled with my visor for about a minute and struggled to get the other half of my bib attached to my belt (it had been flapping about on the bike). For the CLT I shall have proper tri gear on and save myself some time in transition!

This was also uneventful and the time also doesn't match with my watch OR the original postings for the run. My original "official" time was 24 while my watch time was 24:34. When I went to write this post I checked the run time again and the new time is 26:58.9.

This run was good - it was more hilly than the Cayuga Lake Triathlon course but it was all pavement. There was plenty of support. They even had the fire department out spraying people with water! I need to work at working harder on the run portion. It is the least important part of a tri, but it is also my best part so I should push harder! 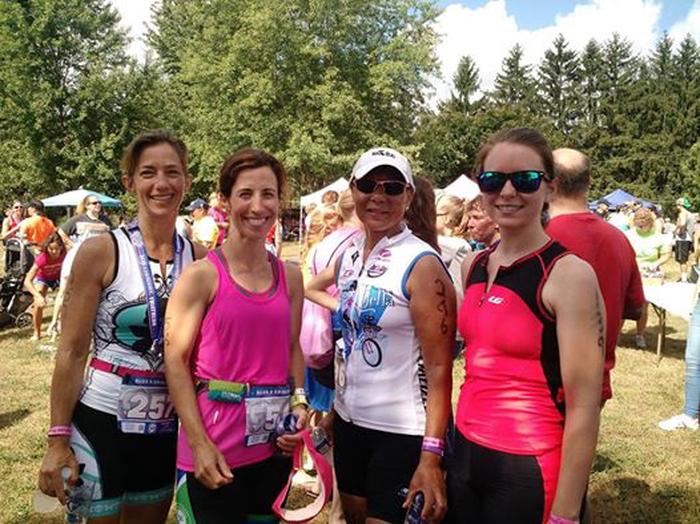 Katie also wrote up her experience from the Gillie Girl Triathlon. Read all about her race.