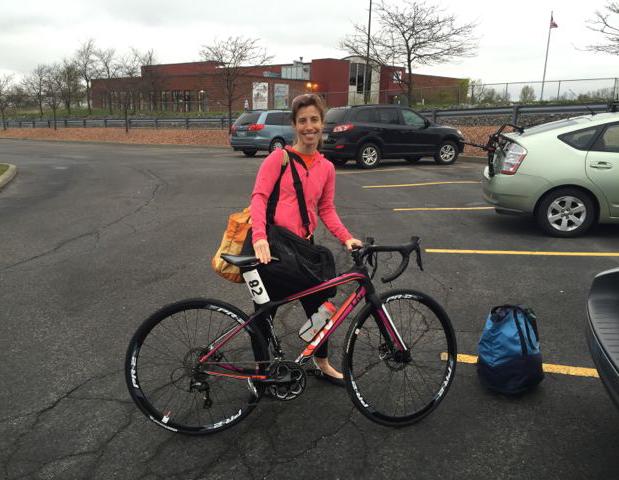 The day before the race, I spent the morning with my kids at NYSSMA (New York State School Music Association). Scott worked on the set for Xander's play, and then he headed up for packet pick-up. We learned that I was to head out at 8:30 and Scott would begin at 9:15. I felt excited and ready, though I was sad that my friend Anne wasn't here to do this with me again this year. I was excited when I learned my friend Christina was in my heat and also my friend Gail from swim class.

Then, it was time to go to sleep. I have this great new sleep app called Sleep Cycle and it measures the quality of my sleep, lulls me to sleep with soft ocean waves and even measures my pulse in the morning. I set it up and headed to bed at 9. A few hours later I woke up believing that the swim was across a muddy river with a strong current. In my dream I was fighting with Scott saying,

I don't care if we paid for the race! I am not swimming across that river. I draw the line at current and it is freezing and raining.

Also part of my dream was one woman who was allowed to swim in a calm blue river with dolphins. She was the only one. Everyone else had to swim across the muddy river.

Thankfully when I woke up for real I quickly realized that it was only 400 yards in the pool. Yikes I must have been anxious. My sleep quality was an abysmal 59% (down from a normal high 70s or low 80s)

We decided to skip the pre-race meeting and arrive an hour before my heat. As we exited the highway, it started raining. What?? There was a 0% chance of rain at that time and no rain on the radar. Thankfully it was just a very brief passing shower. We did have two garbage bags each just in case though!

We quickly got our bikes set up, did the usual socializing and got comfortable in the pool area. One of my favorite parts of this race is seeing everyone, and I felt generally happy, though slightly crazy to be out on this cold, very windy morning. It was 43 degrees and the wind was really strong.

I found Gail and asked her if she wanted to share a lane. I was comfortable swimming next to her and I knew she'd be faster than me so we'd be off pace from each other (hence not bumping into each other). I warmed up a bit in the warm pool, mostly making sure my goggles weren't going to leak. Gail and I met a woman in our heat named Mary who is getting back into triathlons. It was fun chatting about the local community and encouraging her to get involved.

Before long it was time to start. I can swim a long distance now after taking a full year of lessons with TI Expert Instructor Shane Eversfield, but I swim one speed regardless of how long I plan to swim. Shane thinks that I need to do some PT for my shoulders - they cave in and they are really little. I need this to have more power in the water. As I started, the familiar panic set in as well as the negative self talk, "What are you thinking? You still can't swim. You are going to be the last person in your heat." After about 2 lengths of that I said to myself, "You can swim. Just because you WANT to be faster doesn't mean you CAN be faster today. Just relax, swim and have fun." I did relax after that and the swim was quite lovely. Soon, the red kickboard came down to let me know I had one length left. There must be something wrong with the counting. Gail was still in the pool and I KNEW she was more than 25 yards ahead of me. I confirmed with my counter and thought, "Wow, I'm faster than I thought."

Putting on a long sleeved shirt, vest, running jacket, windbreaker, long pants, hat and mittens along with all the usual things like cycling shoes and socks and helmet took a LONG time!! It was freezing and windy and I felt it was better to take the time to get everything on than to rush out and freeze for an hour. Soon I was off, but I was well behind Gail and Christina (both beat me out of the pool so it was fair to expect but I had hoped to be faster than them at transition and shave some time off).

Last year was the year of the swim and this year is our year of the bike. That meant it was time for a new bike. Our friend Jim gave us a list of things to look for and our friend Katie also gave us great tips. Armed with all that knowledge we headed to Cayuga Ski and Cyclery to look. We met Anthony there. He is an avid cyclist and all around great person. He spent a ton of time with Scott and me answering our questions, helping us select what would work best for us, and later fitting them to us. I have been biking quite a few times and LOVE my bike so I was excited to ride it for the race!

I headed out to follow my rabbits, Gail and Christina. It took me 5.4 miles to catch Gail. We chatted briefly as I passed her and wished her well. I caught Christina by mile 7.4 and I had to work SO hard to get to her that I was rather confident that I'd see her again. Sadly there was no new "rabbit" after Christina. I still struggle to set a consistent pace, finding it much easier to chase someone. Without someone to chase as we hit some hills, I lost ground and Christina caught up to me. We leapfrogged a few times. It was fun to keep seeing her on the course.

The only notable thing about the bike ride besides the crazy WIND was that I was totally prepared for the weather. I found this amazing as I NEVER ride when it was cold. I left this ride thinking I SHOULD and remembering my kids' pre-school philosophy, "there is no such thing as bad weather, only bad clothing." My windbreaker is a cast off from my sister and I thanked her repeatedly in my head on this ride for giving it to me. It was a lifesaver!

I did come in the wrong side of the bike finish and had to cut back over, but that was MUCH better than getting lost and doing an extra mile like I did last year!

The sun had come out by this time so I took off all my layers except my trusty Turkey Trot shirt. Thankfully I hadn't thought to prepare my shoes by untying my laces. My hands were completely numb and I couldn't have worked laces. I smashed my feet into the already tied shoes and hoped for the best. Numb feet, numb hands and I was off!

I consider myself a weak swimmer, a novice biker, and a pretty solid runner. I knew this would be my best leg if I could get past the numb hands and feet. Almost a mile in, my sock was slipping so badly I couldn't run. I stopped and pulled it up and tied my shoe. My hands were ok by this point. I lost about 40 seconds so my average pace dropped to 9:22. I wasn't happy so I worked on speeding up. By mile 2 the average pace was 9:02 - better. Soon I was heading downhill on Cherry. As I hit mile 2.5 I read the average pace again - 8:49. I set a goal of an average of 8:30. One nice thing about running long so often is that 4 miles felt like a joke. It was easy to crank up the speed for this distance, especially knowing I was done with the uphill part. I finished strong with an overall average moving time of 8:22 not counting my stopped shoe tying time.

I LOVE this race! As my friend Paula said this morning, "This race let's you know you need to get training for summer!" I met several new people, saw people from my gym and enjoyed the camaraderie among the athletes. Oh and I talked with Gail afterwards. She swam an EXTRA lap. It was my fault - I told her they put a red kickboard down when you had 25 yards to go. I didn't realize they had BLUE and RED kickboards. She saw the blue kickboard and didn't know it was her last one. I felt bad but she was really chill about it so that was good!

Despite the cold, it was a great morning. If you live in or near Ithaca, definitely consider adding this to your list of races for 2017.