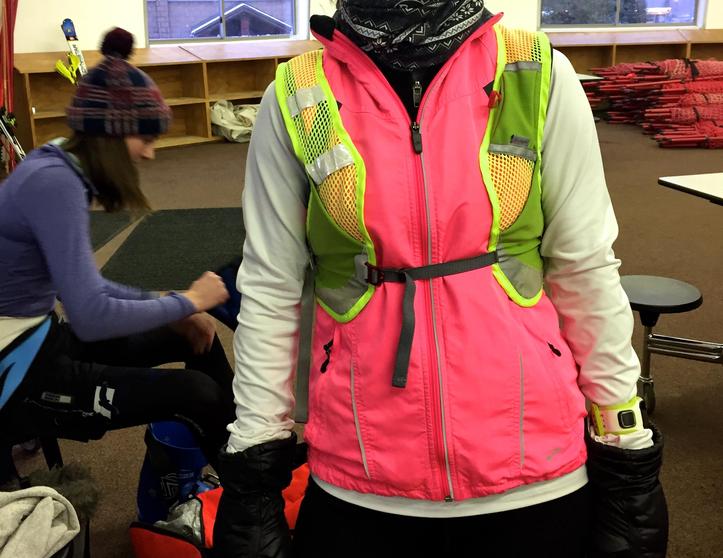 36 degrees. Dark. Damp. We pulled into the Bristol Mountain parking lot for Elizabeth's ski training and I quickly put on all my reflective running gear as she headed out to ski. A couple of moms and kids said, "are you running?" I replied that I was going to go out for 6 miles. "I'm scared to go out in the dark to run," said one and the other agreed. Then they looked at me and said, "but you do have all the right gear." I shared a bit of my story about the Virgil Crest relay and said I wasn't a bit scared and headed out. Then of course I though about why I am not scared to run in the dark. It is totally because of my sister. She does such hard core amazing things that anything I do pales in comparison.

I turned on a Tim Ferriss podcast that I had started in the car the day prior. I planned to finish listening to The Return of the Money Shot by Whitney Cummings on this run.

The Thing About Podcasts

They me feel like anything is possible. I am energized and empowered and excited while I am listening. But, like a runner's high or a runner's invention idea, the feeling and the memories fade quickly after the run.

I often listen to podcasts on a run when pace isn't my focus. Just last week I ran while Xander had a ski race (I ran while he was inspecting the course and was back to watch his race) and finished it the next day when Elizabeth was training. Scott listened to the same one on his run at the same time in a different place (we didn't plan this). We both came home at dinner to eagerly share this great podcast that we listened to while running. But, we didn't remember all that much by dinner. I even had to go look at the show notes online and in the comment section I found the inspiring quote that I had loved while running.

As I pressed play and headed out into the darkness I looked forward to that feeling of a conversation with someone, that feeling that anything in the world was open to me; at least for the next hour.

After the first 14 minutes of the podcast (the part I listened to in the car) I told Scott I wasn't sure if he was going to want to listen to this. Whitney took a very long time to answer the question about co-dependency and then delved more into it with the 2nd question. It wasn't exactly engaging but it wasn't boring either. I was hooked in a weird way, and said I did plan to finish it. Unfortunately, I identified with a lot that she was saying but I wasn't sure he would with the first 2 questions.

The sticky parts of the first 14 minutes for me included two lines:

"Perfectionism leads to procrastination, which leads to paralysis." and something about how co-dependent people "don't have fun."

I'm already working on the not having fun part and dumping activities that I do "because I have to." So, while I identify with a lot she said in these 14 minutes, I am happy to report that I'm "already on it" as far as changing my attitude for things.

Thankfully I had pressed fast forward for most of the dog part in the car. I don't love dogs and I couldn't really listen to the dog Q & A. There was a smidge left as I started my 2nd run so I zoned out and decided whether to stay on the main road or run a mile and turn off to a lesser traveled road. After I made my decision the dog part was over.

Equine Therapy and the Truth

We lie all day every day and it is exhausting.

She went on to share stories about her own equine therapy. She would select her horse to work with, and then the horse would be with her as long as the thoughts in her head were positive, honest, and she was fully present. As soon as she started to think, "I should get this done or I shouldn't be here because I need to do this that or the other" the horse would be distant and walk away.

She said that this therapy has helped her work on truthfulness. It is a very tangible reminder of the need to be honest and serves to point out how dishonest we are most of the time. A survival tactic learned in childhood for most. I started to think about how often we feel we need to lie. Usually the alternative is rudeness and we don't want to be rude so we pretend we like the dinner, the game, the party, the baby shower, the outfit, the present and the list goes on and on.

I'll share just a tidbit about the present thing. A hopelessly bad actress myself I spend most of my "after present" time feeling guilty that I didn't pretend better to like something. My daughter is similar to me; you know immediately when she doesn't like something even if she tries to be polite. My son, on the other hand, the self-proclaimed perfectionist and budding actor in the family, overacts when he doesn't like something and LOVES it. When he really likes something his reaction is more muted and comfortable. This other extreme of lying has its own set of consequences.

I met my husband when I was 18 years old. I was happily in a long distance relationship that would last another 4 mostly happy years, but Scott and I made a connection the first day of classes that remained during college and beyond. It wasn't until  after I'd broken up with my high school sweetheart and Scott and I had both finished grad school and were gainfully employed that I fell in love with him though.

Why then? That weekend I'd driven from Boston to NYC to visit him. We spent two nights hanging out, dancing and drinking. It was great fun, but even late into Friday night it was clear just how much he needed me to love him. I was off put by the desperate energy and told him straight out that I wasn't going to be in another long distance relationship.

He took it well. In fact, the next morning when I woke up he was out in the parking lot near his apartment playing street hockey. Shortly after I got up, he came back and we headed out to the city for the day. Something was different. His energy changed. We had the most amazing day at the Metropolitan Museum of Art, we went out dancing until 4 a.m. and the next day we walked dreamily along the ocean.

3 days later we were dating long distance and 8 months later he asked me to marry him. Early in our relationship I asked him what had happened that day. He said, "I realized I cared more about your friendship than dating you." He continued, "I said F___ it! If I can't date her I might as well be her good friend."

Whitney's podcast shared just that. The delicate art of not caring what someone thinks about you. Not needing their approval, acceptance, love you name it. The energy that you put out is so much more positive and powerful that way. She also talked about the challenge in her industry (and many others) is to walk that line. To be a successful comic she must have people love her, but she can't care if they don't love her. She has to remain detached or it will hurt too much.

I related very strongly to this. I sell cake for my business and even after years of doing this, I try to avoid going to functions where the cake I sold is served. I worry too much that someone won't like it, someone will say something rude about it, and generally have a low level of stress around the event because of my cake. I'm getting better though and working to understand that some people will not like my cake, and some people will love it. People bring their own experiences and expectations into their cake eating and I can't control that.

Toward the end of the podcast and my run, Whitney shared the above quote. I don't remember if it was hers or someone else's but it doesn't much matter. I have been to enough cross country meets and ski races to know this is true. That grit desire and heart is what makes a champion. You have to want it! I love the saying. It is a great reminder that you need to really WANT something and then you push yourself harder.

Focus on One Thing at a Time

"There are no awards for starting 15 scripts," she said. "You have to finish." She continued that it works better for her when she focuses on one thing at a time. Tim Ferriss talks about this a lot as well, and I do totally get where they are coming from. It is perhaps my biggest challenge as a person though. She did share that she also struggled with this - she has so many things that she's interested in, wants to learn, do, make etc. I am a mom, a daughter, a wife, a runner, a baker, a creative, a tutor, a writer, and the list goes on. Each day I do so much, but sometimes have nothing tangible to say I accomplished!! So, I appreciate her reminder and I will continue to work on this.

And the Window Closes

Soon I am back where I started. The mountain. I look up and the skiing looks pretty good actually. I lament that I didn't bring my ski stuff (the way to make sure I make good on my running plan) but I'm also happy that I ran. I walk back into "the bubble" that we call home at Bristol Mountain. Elizabeth is still training, but a HS ski race is wrapping up. I take off all my bright running gear and sit to enjoy my Whole Bowl dinner in my mini crockpot.

As the reality of the fact that I'm back in the "real world" settles in, I open up my iPad and look up Copper Mountain lodging. My goal tonight: decide whether we're going to drive cross country to see my friend Anne and ski out west for the first time or ski someplace in the east for a trip. Soon I have several lodging options and I've found discounted tickets for March. Now the question remains ... do we drive 25 hours or about 7? I haven't managed to decide yet!!