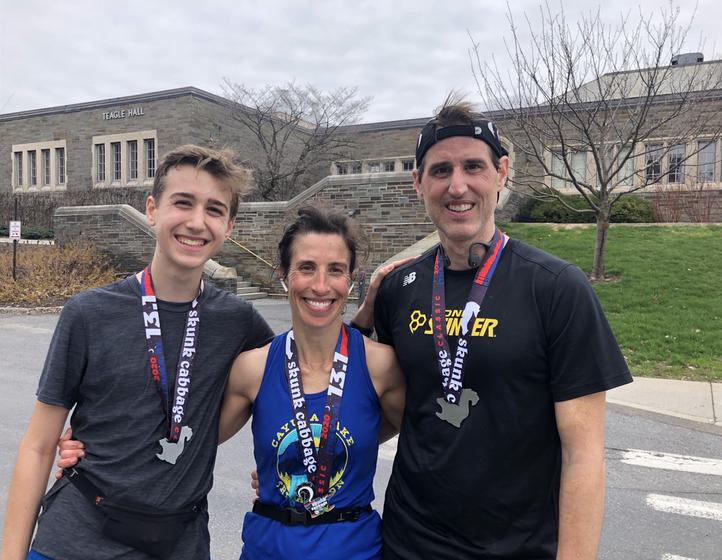 The FLRC cancelled the Skunk Cabbage Classic on the very day of our last MITHACAL Milers training. They had just learned that Cornell likely wouldn't let them host a large event and made the prudent decision to cancel. When Adam told us at our practice I was devastated. The full scale of this outbreak wasn't yet known and things weren't cancelled in general yet. It was one of the first of many cancellations. My friend Tonya said she was going to run her own Skunk race on the morning of the race. I thought, "hmm that's a good idea." I tucked that back in the back of my head and kept on marathon training.

Many weeks after that cancellation our Memorial Day marathon also cancelled. We had signed up for this marathon for three reasons.

Anyway, all of that became a moot point when they cancelled. Now the decision was, "do we keep training and do our own?" We decided YES. All of us are doing well with training and it is giving us something to focus on. Elizabeth never actually started training so she has volunteered to be our support. We continued our training and then as we wrapped last week we realized this week called for the Skunk.

Tonya are you still running?

I texted Tonya to ask if she was still planning to do her own race. She said she had decided not to but wished us luck. We made a plan. We'd race at 10 just like the real race, but we'd give a slight head start to me so that it would be easier for Elizabeth to support us with water stops and cheering. We'd order Taste of Thai Express for after the race as a special Sunday treat. Xander was worried we'd be too close to people. He imagined hordes of people showing up. I thought at most we'd see about 20 on the course.

The morning was typical for a race morning with only slightly less stress. I got up at 5 and enjoyed coffee while grading student work and checking in with students for 2 hours. After that we had breakfast and then went through the course. Xander hasn't run the half before and neither has Elizabeth. They'd both need to know where to go. Soon we all went our separate ways to get prepared and met up in the foyer around 9:30.

Elizabeth drove and Scott was her front seat passenger. I hopped into the car and we were backing out when I gasped. "My AirPods!" Elizabeth thought there was something really wrong so I was properly chastised by everyone in the car while I ran in to get them. As we started driving again she said, "so Xander1 and Xander2 do you you have everything?" Xander and I are really similar and it is a going joke in the family that we are two walking disasters as far as being prepared, being airheads etc. As our drive got underway we started pretending to be cats in the backseat. Scott and Elizabeth started laughing. I asked if this was why I was a backseat passenger. They said, "not originally but now that you mention it."

I couldn't decide between a tank top or short sleeved shirt. It was 47 degrees and Scott and Xander were both in short sleeves. I put on a short sleeved shirt and grabbed a tank top in case. When we arrived at the start line I quickly yanked my shirt off and my AirPod went flying under the Pilot. Of course I freaked out. I switched to my tank top and light gloves and headed off. 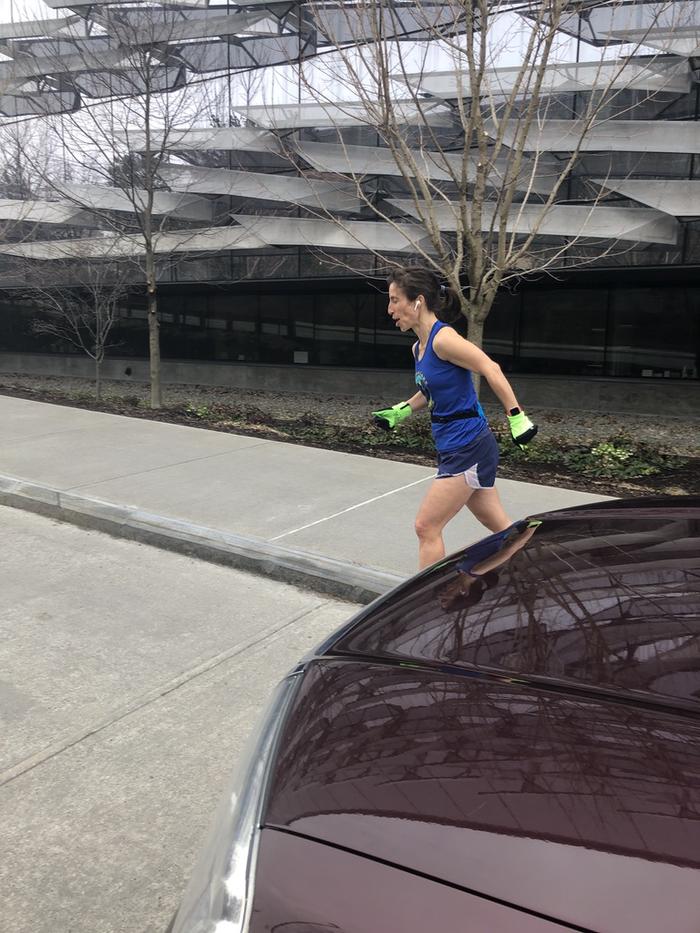 Joel in his banana suit

I was just under 2 miles into the course and I saw a familiar person running toward me. It was Joel Cisne in his banana suit. Because of my rough start I spent the beginning of this run questioning what we were doing out here on the course by ourselves. Did we really need to race today? Wasn't a 13 mile training run on a fall back week good enough? As soon as I saw Joel I thought, "This is gonna be a great run!" He was all smiles as we exchanged greetings. I smiled and perked up.

Soon after seeing Joel I saw my friend Steve with a buddy of his. I stopped and chatted with them briefly as they inquired how many others were on the course. I told them my family was behind me and I had seen one other person out.

Laurel cheers us on

Just before the 10K and half split from each other I saw my friend Laurel running toward me with a sign. She was out cheering us and other runners on. It was SO great!! Also at this time I noticed that the course was freshly marked. Wow! I wonder who did that. I thought (correctly I later learned) that this must have been Joel. How cool.

As I neared mile 4 where we turn onto a main road Elizabeth was awaiting. I saw the Pilot's hazards blinking from a distance and then she hopped out and started to cheer for me. I had asked her to take pictures of me en-route and she did! She gave me a sip of my water and I was off.

As I turned onto the main road I really had no energy. I was not even 4 miles in and I thought, "oh yikes!" This is a time in the race that I'm usually super jazzed. The crowd hasn't yet thinned and I am definitely in full race mode during a normal running of the Skunk. In this moment I suddenly realized the difference between running your own half and running a race. The former is so much harder!

I also noticed that this stretch is most definitely NOT downhill. We had told Xander to expect a lovely downhill after that turn. Hmmm. What is up with my memory of the course? 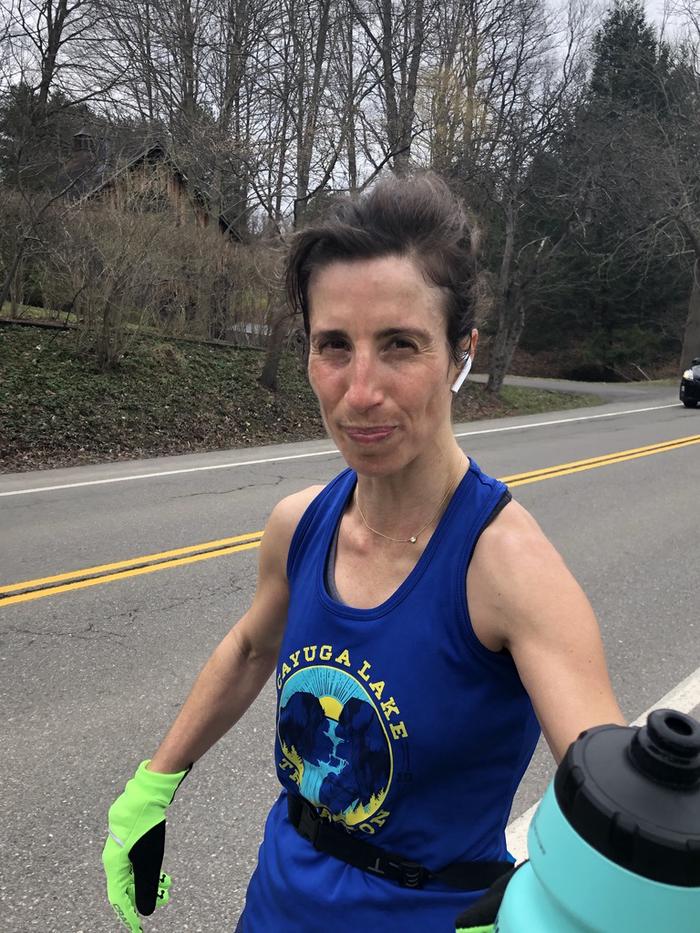 Elizabeth's water stop for me 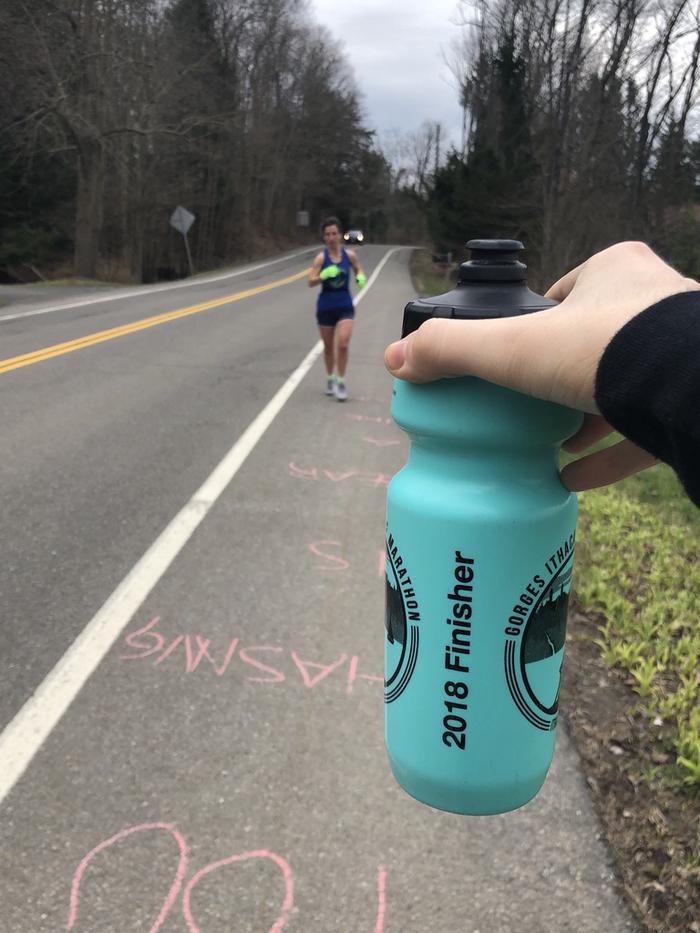 I saw a familiar person running toward me. Tonya!! She said she was running the course backwards to see people and cheer them on. I was the 9th person she had encountered so far. I got a new spring in my step just as the course headed downhill.

I enjoyed this stretch just as much on my own as I do in the race. It is typically the time in a half when I start thinking ... once I get to mile 7 there are only 3 miles til mile 10 and then you are practically done. As I approached the end of the main road I saw a dark blue house ahead. In Google maps this house was pale green. We had talked to Xander about how it would be obvious where to turn. A pale green house at a big intersection. Oh dear. Elizabeth told me he had already gotten lost once. I turned back and saw him. He should see me turning and be ok. Whew!

Take a picture of the chalk!

As I turned onto this side road I saw Elizabeth again. I'd hit my 7 mileish water stop. I saw chalk signs and said, "can you take a picture of these?" She inquired why I wanted a picture. I said, "because they are great!" She laughed and said, "I drew them!" Yes, somehow I thought some random stranger had been writing encouragement in chalk for me. This one said, "run like you are being chased by a bear!" This made me fondly remember one of Xander's cross country races. He and a friend were racing for the alternate spot in Sectionals. Both boys had been in the 8th spot off and on all season and whoever came out on top in the last race would attend. I was nervous for him. He often got stuck in his head and sometimes he didn't. It all depended on his (and his friend's) mental state that day. As the last curve happened in that race his friend was right behind him. I shouted as loudly as I could, "The BEAR is there Xander!" In the end he eeked out a small win and went to sectionals. 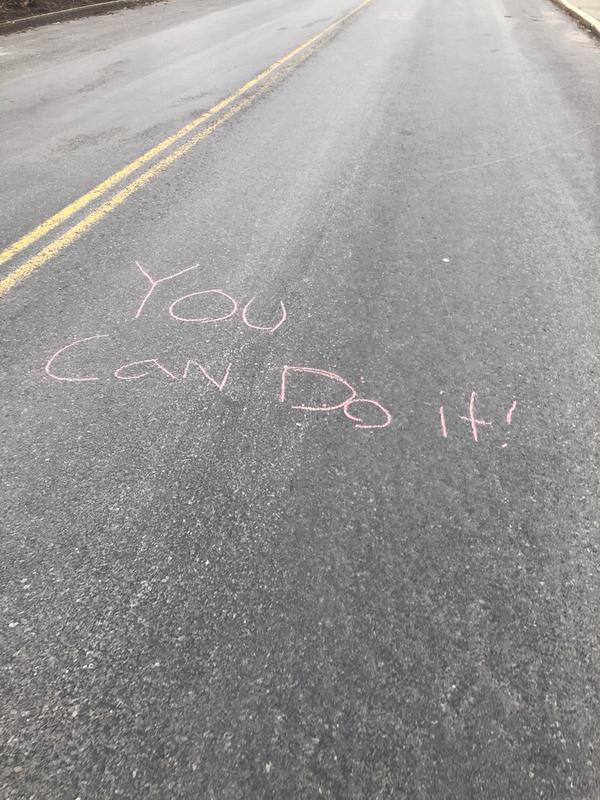 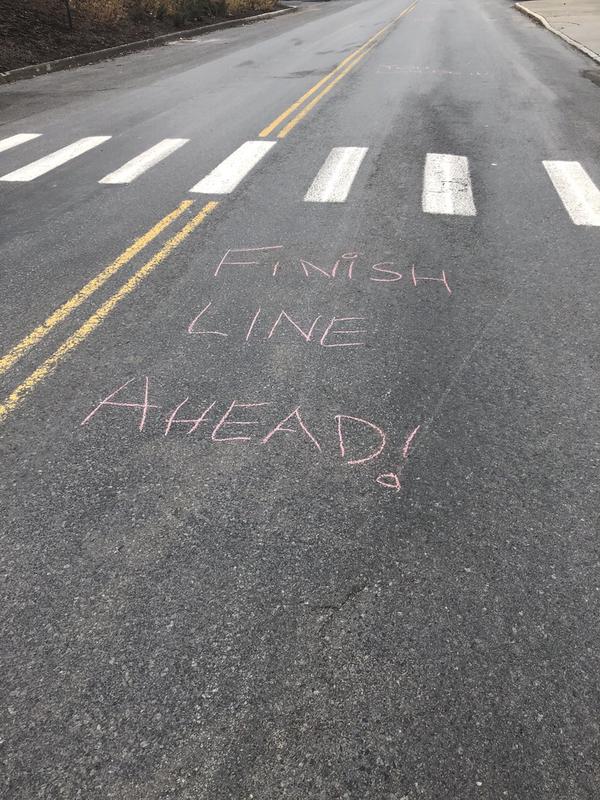 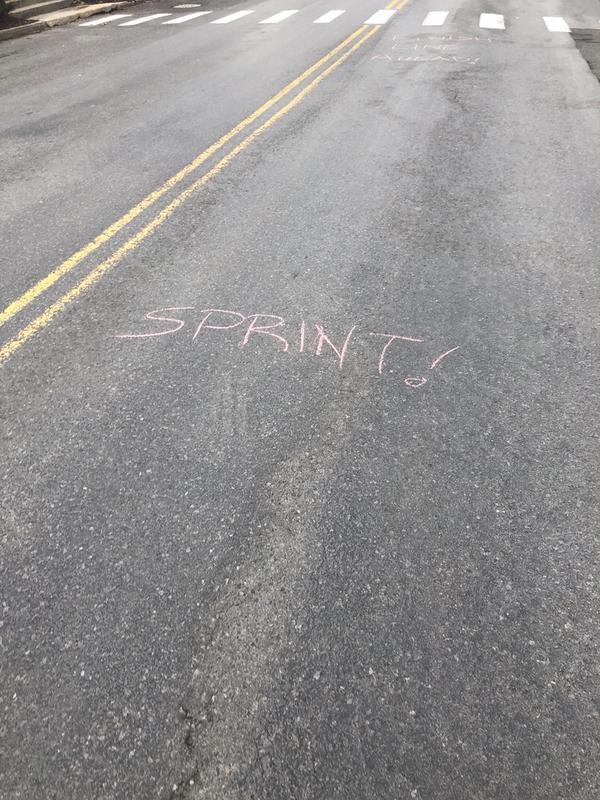 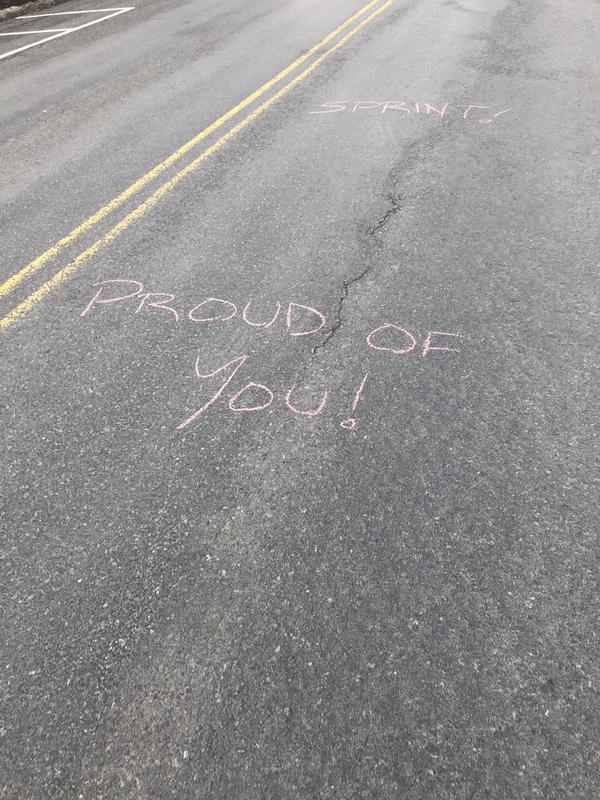 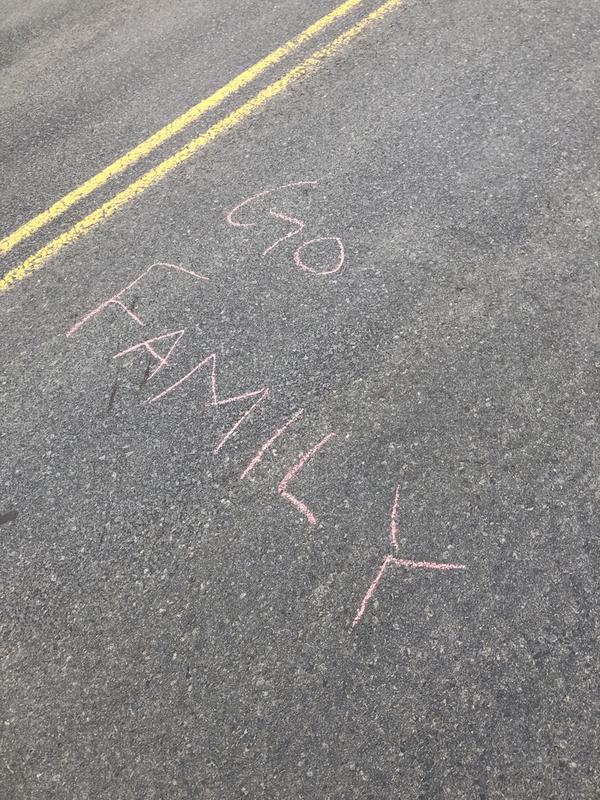 These are all from the finish line!

After that little memory I plodded along. The Hash beer stop would be coming up on the left if we were really racing. That made me remember when we first came upon this stop. I was running with Christina and she had a mimosa. It was her first mimosa and she was SO excited. Aah to real races. They are so much fun.

I passed Tonya again and she offered encouragement. By this time Xander had passed me and Scott was way ahead as well. She said, "they are way ahead of you." I looked down at the road and she had written SKUNK FOREVER on the road in purple and blue chalk.

So at the start of this race I started my Strava app on my phone. It typically lines up pretty well with my watch, and it is accurate on my Black Diamond trail runs with their mileage signs. So, I was surprised when it was off - way off - starting around mile 7. It had been fine and then suddenly it started racking up miles. The first time I noticed it was when it said I was at mile 8 when I was just over mile 7.5. By mile 10 though it had me at mile 11. Good thing I also had a watch track going. I'd have to ditch the Strava track and stop listening to the pace alerts.

I have run this race many times, yet there is one turn I was worried about. It was the last turn onto Tower road. Even in the race I've almost messed this up before. I get into some pattern of thought that just makes me oblivious to the world around me at this point in the race. Well today turned out to be no different. I had realized that my time would be just over 2 hours instead of just under so I was irritated with myself. I had it in my head that I'd finish around 2 hours but really expected it to be just under instead of just over. Somehow I turned a block early. As I was running I noticed I'd be going on a pretty extreme downhill if I continued. I knew were that headed and I knew it wasn't right. I texted Scott from my watch. "I think I am lost!" Then I looked around and just hopped onto Campus road and started running. I had a vague idea of what I had done at this point. He called me and I tried to answer, but it didn't pick up. But by this time I was back on course so all was good. I was really embarrassed though!

As I ran toward the finish I was greeted by Elizabeth, Xander and Scott all shouting for me! It was no typical finish line, but it was definitely fun to run in supported by my crew. I was SO surprised when they put a medal around my neck. They were available for all of us unofficial course runners that day. Joel had told Elizabeth to make sure to give one to each of us. (Notes: They are available for everyone who runs the virtual Skunk Cabbage to pick up once our world opens up again). 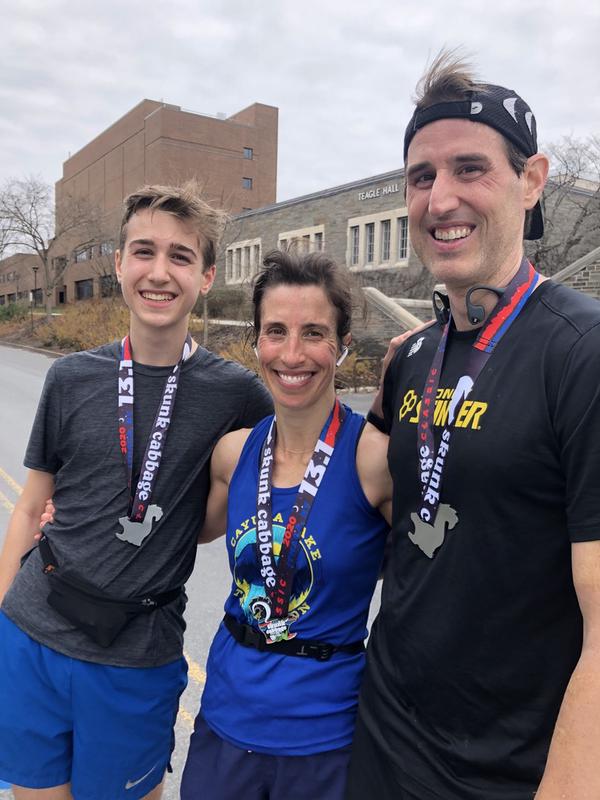 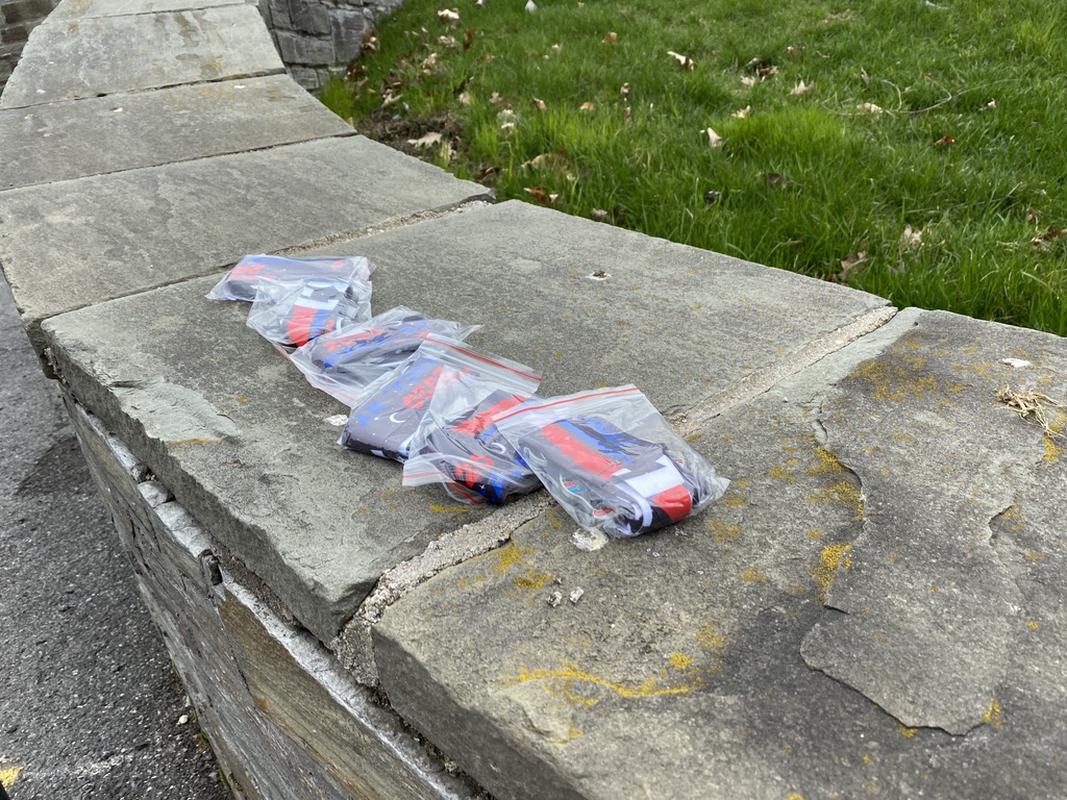 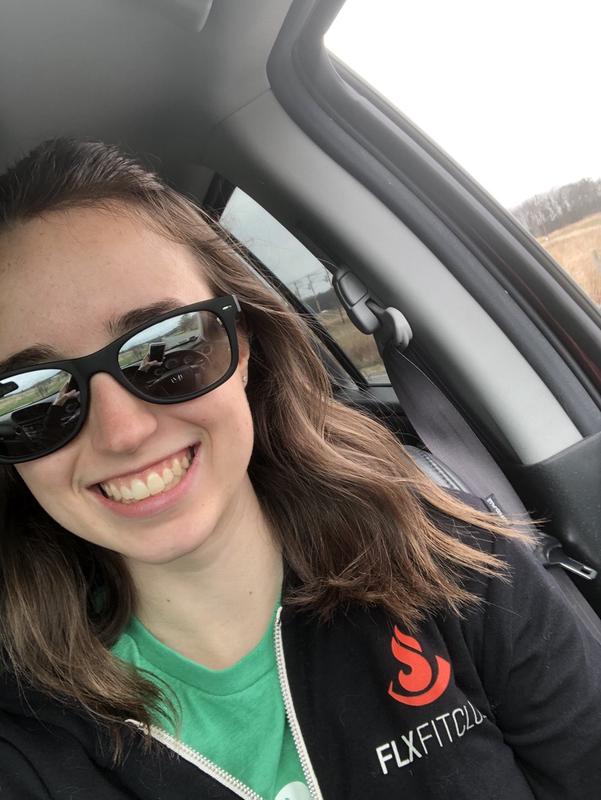