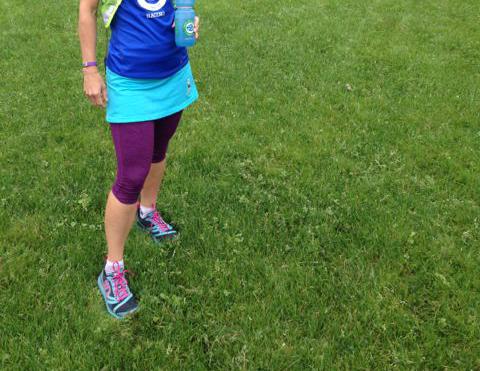 Wow! Week 5 was filled with ups and downs. I practiced what I learned from the Animal Athletics Hill Training clinic and did all my mid-week running on trails, braved the Cayuga Trails 50 course for my Saturday long run, and fit in a lot of cross training. I also realized this week that on shorter run days I've started replying to "How long are you running for?" with an apologetic "only an hour." Hmm ... I don't think this is the best reply. (45.99 m for the week)

Monday is supposed to be a rest day, but we shifted things around this past week, so Monday was the hour timed run. It was HOT, my legs were tired and I was happy to run from water to water, using Not My Dad's ice-cream as a water stop twice on this hour long road run. I also fit in my usual Pilates and Bodypump.  (6.3 m)

Tuesday last chance for the season to do the evening slot for running the Black Diamond trail. Piano is ending soon and it is a season of concerts, business trips and general chaos. So, despite not being in the mood to run I pushed myself out of the car for this one. Well, Scott did actually! Ran up at a 10+ pace so sped down to have a 9:27 overall. (6.11 m)

Wednesday was a speedy outdoor ride (2nd fastest ever) early and the running plan called for a 55 minute hilly run. I decided that the bike counted for something and did a fast Rim run instead. (2.93 m)

Thursday This was a timed run day and I hit the trail again. Plan was to do the Rim, base rim combo by starting at the overlook. I managed to keep a pace in the high 10s (ok so I stopped early to prevent it from hitting the 11s as I had one last ascent) and run most of the hills. I used a lot of the suggestions from the Animal Athletics hill training clinic. I'm glad I attended this. It's already helped me improve both mentally and physically on the hills. (6.51 m)

Friday Rest day from running before the big 18 miler, but fit in some Skier's Edge, a quick bit of yoga and my favorite Friday night class of Les Mills Bodypump at Island Fitness. 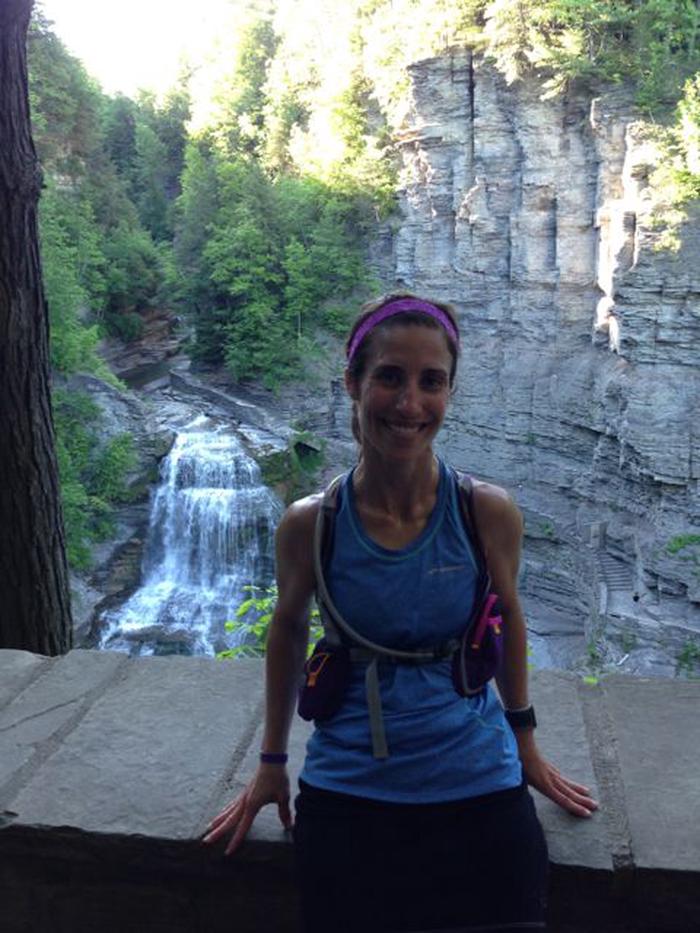 Near the end of the 18 miler

This was the really hard workout of the week. Scott ran 26 in the Finger Lakes National Forest in the morning. He returned from his run at 12:50 as I was heading out to bring Xander to a birthday party and meet Jenny and Christina for my 18 miler at Buttermilk. He was laying on the floor muddy knowing he had to be at play rehearsal in a half hour as I left! Jenny and I dropped one car at Treman and headed over to Buttermilk to meet Christina. After assembling our packs, we started up the brutal hill. We stopped at the gate where our hill training class met and I shared a couple of hill tips with them as we started up the hill. After doing repeats up this hill at the clinic, it feels like a familiar friend instead of the enemy it once was! Our first 6.5 were challenging but good. It was Christina's first big trail run and she did really well. We nourished her with water when she was thirsty and gave her sport beans when she was in need of some sugar. She's even thinking about joining us another time! After loop one we refilled water and headed back up the hill as Christina headed home. The 2nd time the hill didn't feel so familiar and I wasn't quite as happy as we headed up. We did a lot more power hiking on loop 2, but we made it. We took the Finger Lakes Spur trail over to connect to Lick Brook and get on the Cayuga Trails 50 course. It was splendid! We got lost a few times, and consulted our GPS and map (and my watch died AGAIN - realized at home that it is on night setting with backlight, so hopefully next time it won't drain battery so fast!) We had packed extra socks for our water crossing over Lick Brook. However, when we arrived we saw a nice little railroad bridge that we could cross to avoid the water. With only 5 miles left to go and very tired legs, we decided that we'd take the path of less resistance and stay dry. Lucifer's steps were pure torture when we hit them. I can't imagine hitting those twice on the 50 mile race! I'm so impressed with everyone who did that race. Just as we were 2 miles from done I got a text from Scott saying "are you ok?" because of course we were taking MUCH longer than anyone would have thought. Embarrassed, I replied that we were 2 miles out. We slogged through the final 2 and finished pretty strong all things considered. All in all, it was a good day; good friends to run with, we tried out typical Aid Station food and our stomachs did fine, we hydrated well, and we're trying out new terrain to keep things interesting! (18 m)

Sunday The last run of the week! A one hour timed run. I hit the Rim trail again. I am starting to prefer trail!! I waited until the last possible moment to do this, and got caught in the rain. The scary moment on this run was running into a large snake at the top of the trail. He was big and had spots on him and was across 2/3 of the trail. Of course my heart didn't calm down for about 5 minutes! I even contemplated returning a different way, but then realized that was insane. (6.10 m)