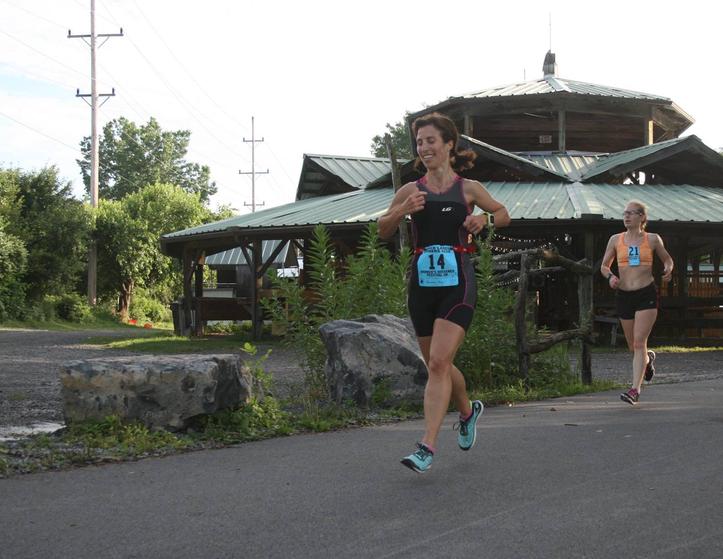 Elizabeth and I have run this race together since she was in first grade! Still, when they announced that the race was moving from Dryden to Stewart Park, we were not so sure we were up for the move. Perhaps this was a sign that our Women's Distance racing days were over. The outing to Dryden is the part that we look forward to; the horse path, the never ending hill, and of course the "need" to do dinner out at Viva afterwards!!

Over the years we've made it a tradition to invite a new friend or two to join us at this race and make and outing of it.

For awhile we decided we weren't going to do the race.

We went to the end of school year meeting about Cross Country in the fall. The girls team is supposed to log miles over the summer. Their focus is on building base, not racing, but still it seemed like it wouldn't be a bad idea to have a race in the summer. Then, the Finger Lakes Runners Club put out an appeal for volunteers. The boys sometimes join us to volunteer at this race. Being that it was in Ithaca, it would be super easy for them to do this. They signed up as finish line volunteers and we registered! 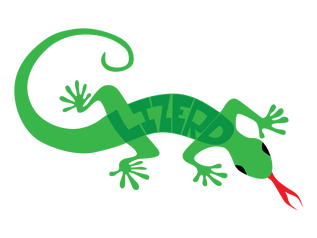 We've nicknamed Elizabeth "LizERD" because of her initials (Elizabeth Rose Dawson), and last year we used the team name LizERD. However, when it was printed on the sheet it was either all lowercase or all uppercase and the result; it looked like we didn't know how to spell the word. Not wanting to be embarrassed for a 2nd year, we put ourselves in as "Team Lizard."

This race is cool because they have a mother/daughter team division and a sister/sister team division. Elizabeth and I have a friendly rivalry with another mother/daughter team. Elizabeth's Dad made her a logo for her nickname and we put the logo on poker chips for her 16th birthday. Elizabeth is a golfer, and recently she bought a "high school lifetime" supply of custom Titleist golf balls with her Lizerd logo on them!! I thought about having custom shirts made for the race, but it was a little too close to the date. Maybe next year!!

A few years ago we participated in this race in a huge rain storm. It was SO bad that I almost lost my contact lens as I ran up the hill. The day of the race, the weather was just like that during the day. There was SO much pouring rain that our yard was flooded and we thought we were in for another rainy run. I decided that I'd wear my triathlon suit for the run. At least it was designed to get wet!!

I got ready a couple of hours before the race and did some yoga. By the time it was time to go, the weather had cleared and my family kindly let me know that I could consider changing my outfit selection. By this point I was married to the tri suit idea and pretty thrilled that I'd be wearing a race belt, there would be no chance of chafing, etc.

At the park in Dryden there is a compostable toilet. It is not really a problem, but it was awfully nice to arrive at Stewart Park and see a bathroom building. Elizabeth and I stopped at the bathroom and then I did a little pre-race warm-up run. After that, we socialized and my last minute race jitters had me heading to the bathroom a second time. More socializing and ONE LAST bathroom trip (did I mention I was grateful for a REAL bathroom yet) and we wandered over to the start line.

The field was really different from the race in Dryden. More women and a different energy. You could tell that it was going to be a more challenging field of contenders. One thing I was super excited about was that the course is an out and back. I LOVE watching the really fast runners as they head back by me. It spurs me on to run my best and I get to count runners so my mind has something else to focus on besides my familiar, "one ... two ... one ... two" mantra.

One of my biggest problems with running 5K events is pacing. I struggle the most with the first mile. I usually go out too fast and occasionally too slow. Over the years I've mostly figured out the pacing for the old course (fast first mile, equal effort up the hill trying to hold the pace as best as I can, and then pour it on for the downhill finish), but today's fast and flat route left me wondering what my strategy should be.

My friend and adult XC teammate Tonya was racing as well and we run a similar race pace. The race started and I saw that we were off to a nearly equal starting pace. I've passed her too soon in cross country races only to have her come back and pass me later in the race. I decided she'd be my rabbit. Unless she really slowed down her pace, I would NOT pass her before mile 1.5.

As we ran, all the volunteers on the course were cheering for us. I remember thinking, "Wow, I wonder if this is psyching her out that the volunteers are saying Go Tonya! and then immediately saying Go Amy! so she knows exactly where I am relative to her." Mostly I just kept various refrains and random thoughts in my head including;

Soon, we were past a mile and I felt like I was deliberately staying behind Tonya. It wasn't really my race if I was just using her as a pacer. I passed her and hoped for the best. It was near this time that the leaders were heading back. My friend Lesley was in 4th and Ian's wife Sherry (Ian, from Finger Lakes Running and Triathlon Company) was in 3rd. I counted people for awhile and then came upon the water stop. Ian's daughters were working the stop. I smiled as I ran by them. They always work this race with their Dad. The water stop is usually mid-way up the never-ending hill and they are a lovely little oasis in the race. Today, Ian was taking pictures and I was not in need of water. I hit the turnaround, took note that Tonya was right behind me and kept on running.

The second half of a 5K is always SO hard!! It is that point in running fast where I don't much care to run fast anymore. Today I was glad to have Tonya out there as my rabbit. As I passed each volunteer, I could now hear them shout her name after mine, so I knew I had to keep my A game. But, I also needed a new rabbit. It is important to have goals, so I fixed my eyes on a runner with black and white striped knee socks. I would try to catch her.

The same mantras repeated in my head with one additional one coming in. You have this. You have this. Don't let up. It will be uncomfortable. I also quickened the count on my 1, 2, 1, 2, to try to speed up my turnover.

Pretty soon I heard Joe's cowbell letting us know that we were near the end and I could see Xander and Scott in the distance. Soon, I was through the chute having my bib torn off. I chatted for just moments with Tonya and then Elizabeth finished. It was time to cheer for my Lizerd!! 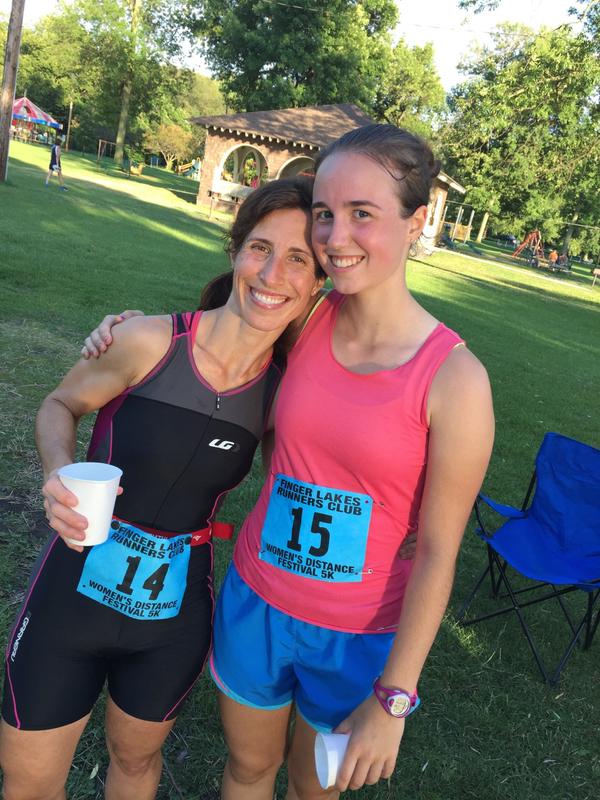 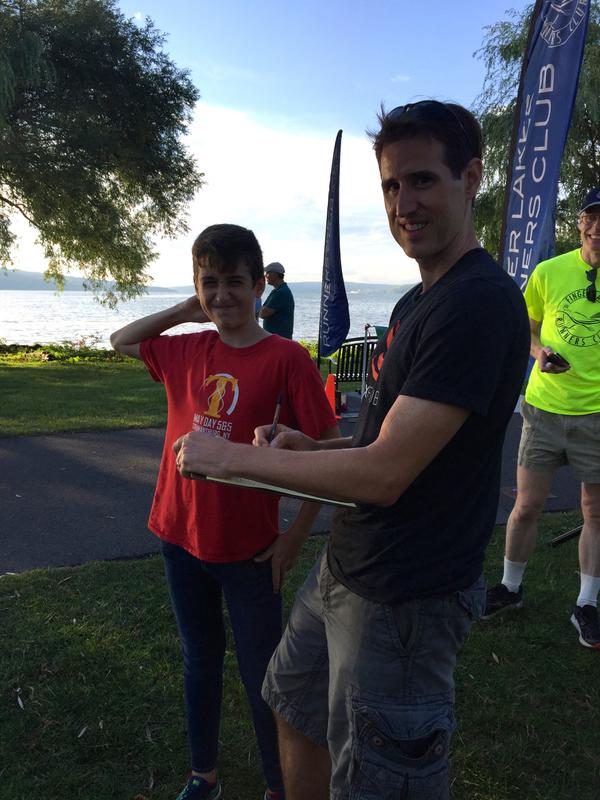 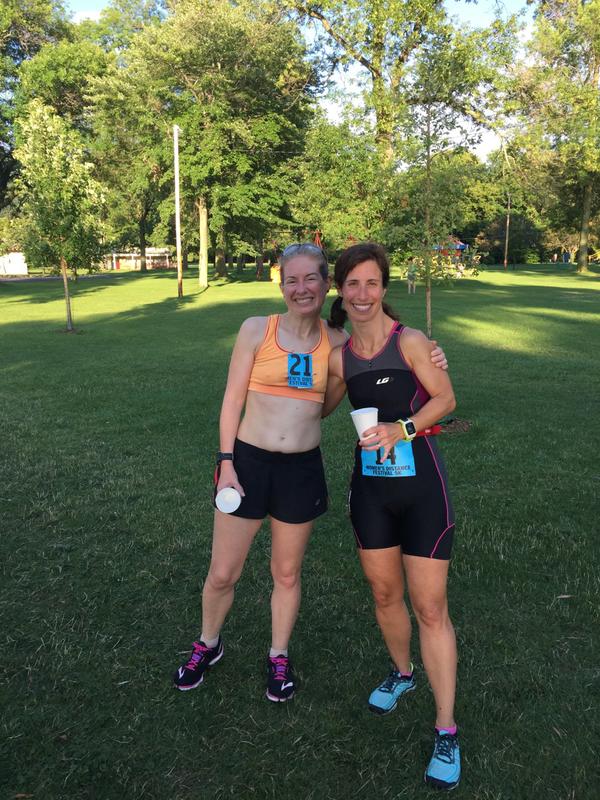 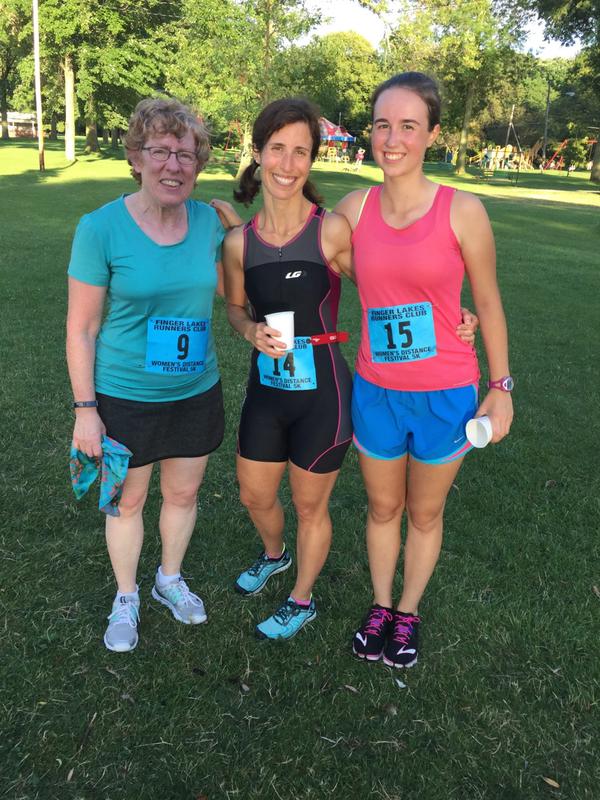 My PR (made several years ago on a much cooler day on a course with some ups and downs and with music), is a 23:40. I didn't hit that today, but I was pretty pleased with a 24:08 and change. Initially not excited to race, I found it to be a nice reminder that sometimes it is good to just put it all out there and see what you can do.

Elizabeth and I pulled off a mother/daughter win (because our competition wasn't there, but still we were excited because we won nice plants) and I very narrowly squeaked out an age group win. Elizabeth also won her age group. We laughed because our friends Kathey and Molly were supposed to run this race and had they run Molly would probably have placed first in the race and their aggregate time for the race would have put them as first mother/daughter team. On the way home we said, "Thanks Molly and Kathey for the plants!!" We could give them to them I suppose, but right now they are awaiting planting in our garden. 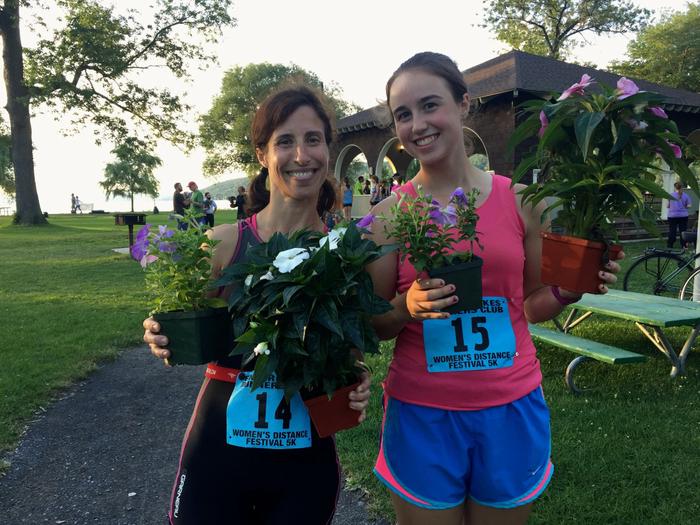 Plants are such a great idea for a prize!!

I'm happy we raced this. We talked about it afterwards and both of us are grateful that we signed up. We saw a lot of friends, got to challenge ourselves and both ran the best we were able for that evening. The boys had fun volunteering too!

Some great things about this race

I talked with one of the organizers after the race. "What do you think about the course?" she asked. I shared our story and said that I had liked it. I think that it has the potential to grow here. When we started doing this race it had over 130 people and over the years it has dipped down to 60+ so it was good to see it back up at nearly 80 this year!! I think it is a wonderful celebration of fitness and women's running.

I hope a lot more local women come out for this next year. Here is my short list for why you should definitely check it out!!