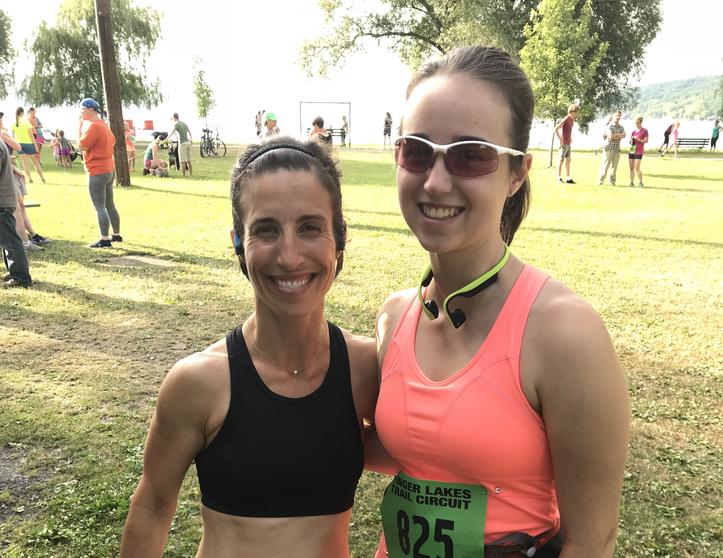 Elizabeth and I have been doing this race for a long while - since she was a little girl. It was fun to see so many little girls and their moms when we arrived at the event. It made us remember those years when she was tiny and out there running. As we shared our stories with some friends at the race we realized that in all the years we've done this we've never run together. However we are always pretty close to one another.

I didn't expect them to say yes

On a whim I threw my new Aftershokz wireless headphones into the car as we left for the race. They always say no headphones, but now it is at Stewart park (no vehicle traffic) and my headphones don't actually go in my ears so I can hear the world around me. I figured they would say no, but I thought I'd ask.

When I asked the race director she said sure. I realized that I wasn't ready for that answer when Elizabeth (who had also snagged hers) said, "now I need to get a playlist ready." Yikes, I thought. I don't have any 5K playlists (because I don't run them with music ... hmmm first red flag). I picked a half marathon playlist and headed off to the bathroom.

The other day my Tom Tom flaked out while I was swimming and it stopped working. I had planned to use Scott's Tom Tom so I could see my pace and then use my phone with Strava to record for real (so he could delete the entry). However, when I went to turn on the music and Strava I noticed my phone battery was at 23%. No Strava. I put it in low power mode and headed over to the start line with Elizabeth.

This race is an out and back course in Stewart Park in Ithaca. It is a lovely course really - flat and simple. There is a water stop at the halfway point and they always have the turns well staffed. There are two suspension bridges that are super bouncy as part of this route. Many of my friends were working corners and it was fun to see them!

I had an unusual start. I started pretty far back in the lineup and then was dodging and weaving through walls of people. Really? Were the two seconds I gained there going to do anything for me? It was rather ridiculous of me and surely annoying to the people I was pushing through in little spaces.

After the slow start, I settled into a pace that was quick but not too quick. I knew my time from last year was 24:07 and my goal was to beat that. I had Scott's watch set on average pace which in hindsight was not a good idea. The first bit was crazy slow so I was trying to recover from that and probably running too fast to get that average pace to drop. By the water stop at the half I was only down to a 7:59 average pace. I'd have to have a really fast 2nd half in order to get anywhere near my time from last year.

The first half was uneventful though - I was too comfortable with the slowish half marathon music I was playing and struggled to run quickly. In hindsight I should have turned it off and picked up the tempo.

Elizabeth and I both adored this race when it was in Dryden. It was far enough away that it was our girls' night (even though the boys did volunteer one or two years out there it always felt like our thing), and the course was challenging. The first mile was on a horse trail and then the 2nd mile went up for what felt like forever before finishing on a fun downhill stretch.

This course is an out and back and is fully flat. So, here's what happens in my head. As soon as I see the first people turn around and come back toward me I start to get that "I'm done" feeling. I just wanted to stop running fast and I was counting how far back I was thinking, "yup definitely worse than last year."

It is funny because the race is so much easier to get to, and it is just as fun and the course is really more approachable for moms and daughters but Elizabeth and I are salmons and just missing that old course. I think we missed it more this year than last year - last year was new and interesting. This year just settled in that it was here now.

So I was already slowing down (I must note that my half marathon PR pace is faster than my pace for this race) and struggling and then I felt flopping on my left foot. My shoe was untied. Grrr. Should I stop and tie it? A mile isn't too far to run with an untied shoe, right? Well after about 10 steps my foot was feeling floppy and I was worried I'd lose my shoe. I stopped and tied it. During that 6 seconds (yes I counted), the woman I'd passed at mile 1.5 passed by me as well as a couple other people. However, they would have passed me if I'd slowed down more because of my shoe or if I'd tripped anyway! 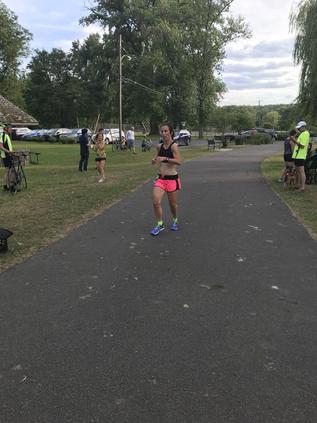 An opportunity to improve form. Major arm crossing that I didn't realize I was doing.

Last year my friend Tonya ran this shirtless. It had rained all day long (poured) and I chose to wear my tri suit in case it continued to rain (it didn't). Anyway, this year it was hot - not crazy hot but about 82 degrees. I decided I'd run shirtless knowing that Tonya would be doing this at least so I wouldn't be the only one. Then, I arrived and Tonya was working same day registration. "Are you running?" I asked. "No. I'm working on my biking." Tonya is doing a bike race next weekend so she's putting in some long biking miles. I briefly thought about going back to the car to get my tank top because everyone else was in shirts BUT I had my own mind set on shirtless so I stuck with it.

After and final thoughts

I ended up just more than a minute off from last year's time and Elizabeth was just about the same distance behind me as last year. In fact, we were close enough together that I almost waited for her at the turnaround. We had decided before the event that this might be our last year doing this so I considered waiting and running in with her. Why so much slower? Well I have a few thoughts about my time and then about Elizabeth's too.

For me - Tonya wasn't running. I used her to pace myself off from last year and I did truly race her, something I don't typically do. Without that incentive I wasn't as motivated. There are other factors - music hurt instead of helping. The right music would have been a built in pacer but my half marathon music was comfortably slow and I just settled into a training run. And more excuses ... my right foot. I'm hitting it oddly on the outside edge only when I run fast. It has been bugging me for a bit and I think it is where my sock is rubbing in the shoe. By the end of this race I was limping. I need to sort that out. And as if I need more there is the untied shoe and the fact that I've been running slowly lately. A few interval workouts prior to a 5K would have been a good idea. As for Elizabeth - she always paces off me so I think her result was simply that she looked ahead and figured she was the right distance behind me. She also said that the music wasn't a good idea for her.

The boys were working the finish line helping with timing so Elizabeth brought snacks over to them as they waited for everyone to finish the race.

Next year I think we'll either volunteer or choose to run together for the first time. Elizabeth will be a senior next year and though it is a summer race, it will be kind of the close of a chapter of her life. Maybe it will be fun to just run it for fun together. She reminded me that we used to "twin" for this race. Now we just say, "oh that's today" and get dressed. It could be our year for homemade shirts and cute twin outfits to close off this chapter of K-12 education years. 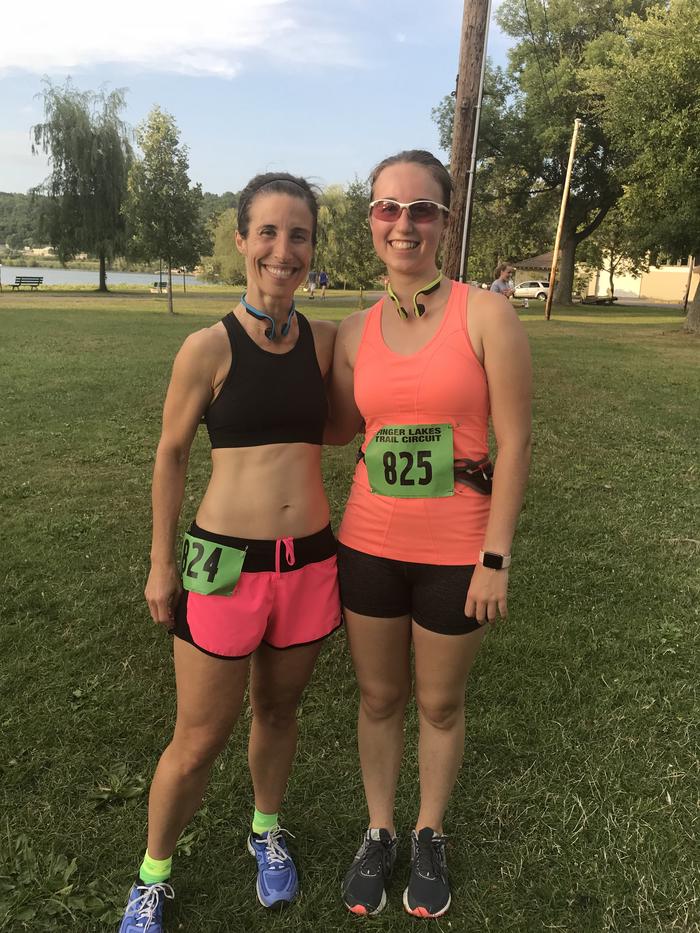 We look happy after the race! Thanks to Linda for taking this for us.

I was 3rd in my age group and Elizabeth was 2nd in hers. We came in 2nd in the mother-daughter team division. We went home with 4 plants. That's one thing that is super cool about this race - winning plants is fun! Now hopefully we can keep them alive this year.