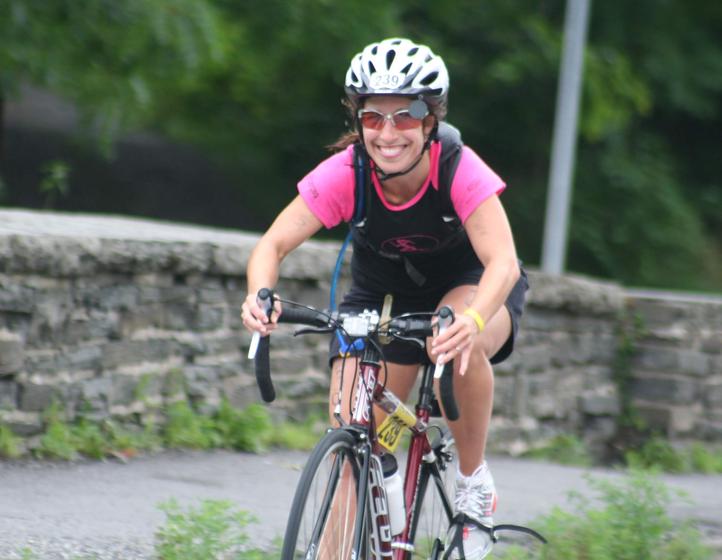 The kids had been taking lessons for a couple of years and I decided I needed to take lessons as well. Despite taking lessons every place we lived when I was growing up, I am not a strong swimmer. Actually that's really an understatement. I am a terrible swimmer. Still, after my 8 week lesson session at the Y, I was feeling pretty prepared for the race.

Back in 2008, Scott and I didn't get up very early. In fact, there were days when we would sleep through our alarm on a school day. Elizabeth would get up for her alarm, get herself all ready and then come to our room saying, "Mommy? Daddy? I'm ready for school. What should I do now?" We had to get up at 5 and be at the Y at 6. My father-in-law was sweet to come early and stay with the kids so we could race.  We headed out after having breakfast and getting the bikes ready in the car. It was snowing as we drove up on this early morning the first Sunday in May. The high for the day was going to be 39 degrees. This would be one cold transition, and a really bitter cold bike ride.

The Y assigns your wave time based on your projected total finish time. Scott and I wanted to share a lane for the swim and then bike and run together. We asked the front desk worker how we could make sure this happened. He explained we'd need to put similar times down for our finish estimates but he couldn't guarantee anything. On race morning we were happy as clams when we learned we were assigned together. We assumed this was how all triathlons worked and started thinking ahead to being together as we raced in the Cayuga Lake Triathlon.

At the race there is a big group meeting and then people either wait (those in later waves) or get to their pool start (us)! I was so scared I was shaking. Uncertain about what to wear for the swim, bike and run, I wore a black bra top and quick wicking underwear for the swim. I planned to pop clothes over it for the bike and the run. The kids' swim instructor was there and he was counting my laps for me. I need to take a moment here to share the first swim lesson story.

The year prior to this, we put the kids in lessons at the Y in anticipation of our first trip to Disney. Our goal was to have Xander feel ready to go down the little slide at the hotel pool without being scared. We were all excited! At the first lesson, the 3 of us got ready in the locker room and then came out to the bleachers to wait to be called into groups. When the groups were called, Elizabeth and Xander walked out to their respective teachers looking petrified. As the classes gathered and groups started to get into the water, Elizabeth started crying loudly, refusing to move. Xander started SCREAMING when the teacher tried to help him into the water. I stood on the pool deck LAUGHING!

So here I am standing on the pool deck LAUGHING (how I react when I'm super uncomfortable about something). Suddenly, the director of the program walked over to me and said, "What can I do to help you?" I said, "I have absolutely NO idea. This is so embarrassing!" He replied, "Hang on, I have an idea." In a flash he was gone. Mere moments later he appeared in his bathing suit. By this point, Elizabeth had calmed down and had entered the water. "I'll work with Xander for you. Everything will be ok." He smiled at Xander and introduced himself as Joe. I sat down on a bench near the small pool and Xander got in the pool with Joe. He had a wonderfully positive first swim session.

Joe got into the water with Xander for almost every swim lesson that session! He was his private instructor until the last week or two when Xander finally had the courage to be part of the class without his own private coach. We got to know Joe and his girlfriend well, even getting together for dinner and lunch and then later a movie with the kids and adults. I gave him a cake as a thank you for all that he did for Xander.

Naturally, I felt I had something to prove with Joe counting my laps. I had bragged about how good I was getting at swimming and was genuinely excited to show him how well I was getting around in the water. Then, the gun went off and Scott took off. I started and I swam freestyle to the end of the pool. I started to panic as I hit the deep end. There were so many people. Scott was already heading back the other way. I can't do this. What was I thinking? I smiled at Joe, embarrassed that I had bragged. I flipped onto my back and swam the other way. Then, I switched to sidestroke, and backstroke again and I think I even swam underwater for a bit. Somehow I finished those 16 lengths, possibly even before the cut off time of 15 minutes. Soon I was heading outdoors to the parking lot to transition.

Most of the slower people (and even some of the faster ones) opted to transition in the locker room. It was after all 36 degrees. I was somehow too worried about my time so I bounded out into the parking lot where poor Scott had to WAIT for me in the freezing weather while I changed. I had what felt like a pretty speedy transition and soon we were off biking ... on our mountain bikes.

We didn't see many people out on the road. It isn't a large race, and we were in the first heat so we certainly were not going to catch up to anyone. All the people we did see passed by us quickly as we lumbered along on our heavy bikes.

The bike portion of the race was uneventful. I don't struggle with the act of biking the way I did with swimming at the time of this race. However, right after this race we caved and bought road bikes. We would NOT be doing the Cayuga Lake Triathlon on our mountain bikes. To this day I remain grateful that we did this less hilly race first so we went to the CLT prepared with road bikes.

Back in 2008 it felt like punishment to me to run without music. I never ran alone. I struggled to keep putting one foot in front of the other from the first step on almost every run. I ran to accomplish our challenges but I dreaded every minute leading up to it and every step while it happened. It was only when finished that I enjoyed a few moments of happiness and pride to creep in.

This run was no different. We started up the hill out of the parking lot and I ran up to the top of the hill with Scott. I was huffing and puffing and not talking much. He was trying to run slow enough to stay with me. We rounded the corner onto the flat portion and hit a headwind. You might think it would make sense to speed up; the headwind would be over sooner. No. I started walking. Stomping is more accurate. A few rounds of, "I can't do this." followed by, "this is terrible" escaped my lips. Poor Scott had to talk me off my ledge and we kept plodding onward.

What goes up must come down so soon we were on the downhill home stretch. My whining subsided and my attitude turned positive. We came bounding into the finish full of smiles and pride.

After quickly getting dressed, we popped our bikes into the car, hopped in and then headed to church. Our kids were at church with our parents and we thought we'd make it back in time. This was a phase in our life where we ALWAYS made it to church, no matter what. We felt bad for being late, but arrived as the service was far enough along that it felt weird to sit down. I believe we stood in the back and listened and then greeted them as they came out to go to coffee hour. We chatted with friends, sharing our story of being so cold, the run drama etc.

After church we all came home and pulled out the sofa bed in Scott's office/our media room and put a movie on. I think that I stayed awake for all of 10 minutes. The race had me fully spent!!

I'm happy we participated in the Tri for the Y. It taught me several important things! I learned that I needed to practice my transitions and it helped me realize that I did need to be ready for any weather. I also realized that it was really unkind to whine so much to Scott. I would need to work harder on my running attitude.

Looking backward, it is really hard to believe that the Tri for the Y knocked me out so much! I'm really proud of myself for working on continual improvement for fitness. Just last year we signed up for the Olympic Distance of the Cayuga Lake Triathlon. One of the reasons I told people it was a good distance was, "because it is long enough to really feel like a workout." Progress.

Oh and results? Well, I can't find them for this far back BUT if my memory is correct I was last and Scott was 2nd from last (only because he stayed with me). We may have beaten someone, but I don't think so! But one great thing about a triathlon is you really don't have any idea how you are placing as you are participating. Sure, you know folks are passing you, but you always assume someone could be behind you!!

What are your stories about your first triathlon? I'd love to hear about your favorite moments or things you learned.