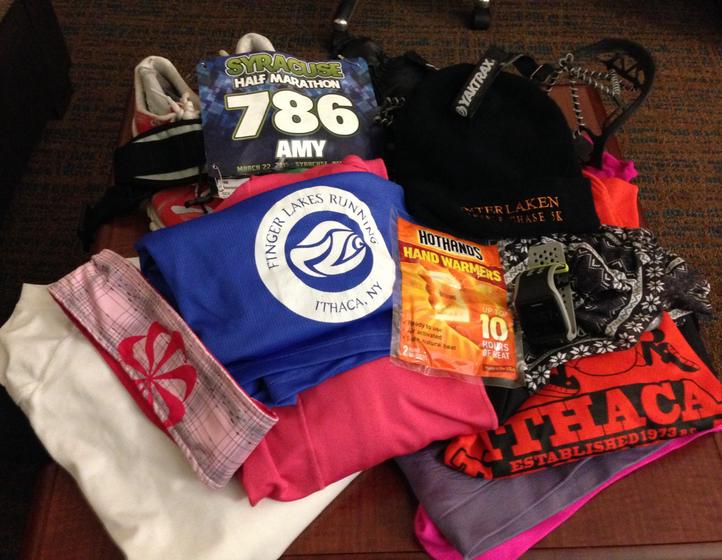 You Get What You Train For

Right before the race.

I'm a planner. I am type A, organized, and always prepared, except when I'm not. I signed up for the Syracuse Half Marathon because I was in Syracuse last year for my daughter's dance competition. We were staying in the Courtyard Marriott and when I headed back from dropping her off at her workshops I saw that there was a water station less than a block from our hotel. I thought, "hmmm if we're here again next year I should definitely do that!" Add in a great 1/4 zip shirt and this year I eagerly signed up.

As is typical, I made a nice training plan for myself. I did a lot of what was on the plan, but found that the cold weather, the kids' ski race schedule, and my own crazy schedule impacted what I could do to prepare for the Syracuse Half Marathon. This was the first year that Scott and I had to split up to get the kids where they needed to be (meaning hotel stays with one parent and one child for ski racing) and I frequently had abbreviated long runs. Additionally, unless I was on a treadmill, I didn't manage the paces prescribed for an 8:05 HMP. My Half Marathon PR time is 1:46:11 which is an 8:06, so to PR I would need an 8:05.

Late winter on a Listserv discussion, Ian Golden, owner of our local running store, Finger Lakes Running and Triathlon Company made a great comment. He said, "Living in NY State we should target our PR races for fall. He suggested we just enjoy the spring races for what they are, an opportunity to get out and run and enjoy."

I liked this approach. I haven't actually run a Half Marathon where I didn't have a specific time goal, and thought it might be fun to just enjoy, not worry about pace, look around and have fun with it. But ... I still had to break 2 hours. That was my real goal; to enjoy and not stress about time, but make sure I didn't cross the 2 hour mark.

For being a planner, I'm really last minute about race details. I like to think about them a couple of days before, and when I do spend time thinking about them I sort it all out really quickly. This race was more complicated because I needed to get 14 year old Elizabeth where she needed to be. We were planning to drive up Sunday morning, and she was expected to arrive at the Landmark Theatre in costume and make up in Syracuse at 8:15 a.m. My race started about 3 blocks away at 8 a.m. A small difference in time, but the theatre doors didn't open until 8:15 and it was going to be 12 degrees outside. I started asking other mothers if they could meet us up there a little early, or ride with us and just kill a few minutes with the girls in a coffee shop. No dice. I could get her a ride up on race day, but she wanted to ride with me (and I was looking forward to the time with her too). I contacted the race and asked if I could start just a few minutes late since it was chip timed. No luck there either. We went about our weekend activities; school play for Xander, fun Aloha season ender ski race for all of us, and then got a weather alert late afternoon on Saturday. Lake effect snow for the region. We decided to simplify our lives and book a last minute hotel room at the Marriott Residence Inn 4 blocks from Landmark and just under a mile from the race start. I would leave the hotel at 7:30 and Elizabeth would linger and head out a little after 8. Voila - a plan! 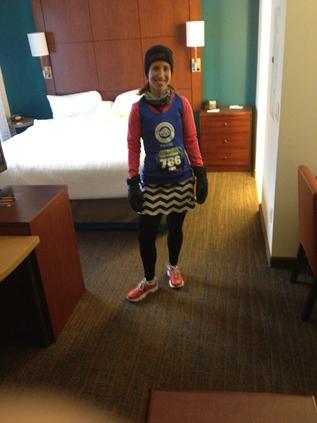 In hotel ready to go!

I was ready for the weather with my hand warmers, heavy mittens, ear band AND hat, calf sleeves and long pants as well as my 3 running top layers. Once I arrived at the On Center, I learned they delayed the race start til 8:15. Now that meant one more bathroom trip so I popped into an outdoor porta potty line (inside was WAY too long). My feet were numb after the line, so I went back indoors at 8:07 and waited. It was LOUD so I knew I would not hear Elizabeth's "safe arrival text" or her "I need help phone call" and I took my phone out of its little pouch and then outside of its mitten to protect it from cold. I texted her that I was going to start soon and she said she was almost to Landmark. After tucking everything back in I went outside to line up. It was so last minute that I didn't notice that I was behind the 9-11 minute mile group. We waited a little bit and the gun went off. Soon I was running. It took almost a full mile of serious dodging and weaving to get into a groove where I felt like I could hold a steady pace. It was ok though, I wasn't going for speed and I had plenty of miles to cruise along. Then, my phone started going bonkers with texts. "oh no! Is Elizabeth ok?" She knows to call me if there's a problem. "Maybe it is FB alerts" "I never post anything on FB and I posted a pre-race picture. That must be it." I wavered about whether to stop and check my phone, but ultimately reasoned that Elizabeth is an intelligent 14 year old that would call if she had a problem.

Normally I look at the elevation profile for races, especially if it is a Half Marathon or Marathon. In fact, for the Wineglass I even sent it out to friends (also running it) with my thoughts for approaching the lone hill on the course. However, I didn't bother with this one. I wasn't shooting for a PR and I knew I'd been running plenty of hills so I'd be fine. However, there were a few hills that were rough. I enjoyed the variety, but there was a short steep hill right between mile 7 and mile 8 that I walked up. I now feel terrible about it, but at the time I didn't much care. Other highlights: 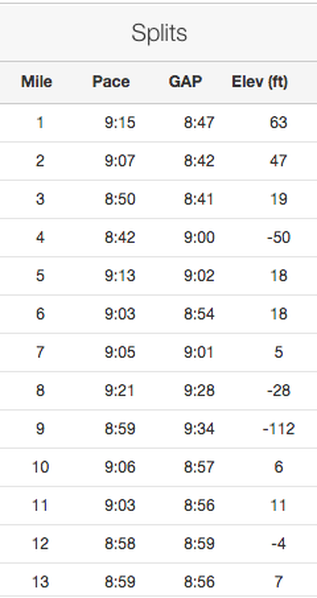