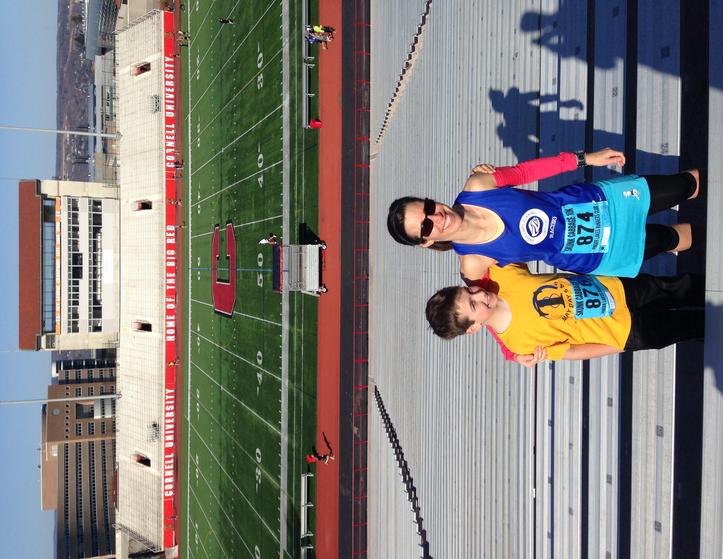 Originally I signed up for the Half. I've only run the Skunk Cabbage Classic one time before and it was the 10K distance. I was really excited to run the half this year! Elizabeth was going to run with her brother and Scott and I would each run the half. However, a week before the race Scott learned he had to be back in Trumansburg for the play he was in about an hour earlier than he thought! That meant I'd have to finish sub 2 hours (totally possible but if I had a rough race for any reason I'd screw up his play) and literally bolt out of there. So, I contacted the race director and asked her if I could drop to the 10K. I would run with Xander and Elizabeth would run her own race. This turned out to be a really good decision.

We posed for our ambassador picture with our team from Finger Lakes Running and Triathlon Company, and talked to many friends before the race. There was a real team feel to the day which made it great fun! Pretty soon, Scott was off for the half and the kids and I made our way to the starting line for the 10K. Right before the race I was swinging my legs to stretch out my hips and Xander reached to tie his shoe. Yup, whack right into his eye with my knee!! I felt terrible for him but luckily he was ok. We wished Elizabeth well and discussed our race strategy. We settled on a 9:30 min/mile pace goal. Within minutes the air horn sounded and we were off! Our first two miles were a comfy chatty 9-9:15 minute mile pace. I knew we were starting too fast, but he was happy and I reasoned that if he can do a 25 minute 5K this was probably ok. Soon we ran by Ian, owner of Finger Lakes Running and Triathlon Company who cheered us on and said, "your daughter's smoking you!" as we passed by. I could still see Elizabeth ahead of us and thought we'd keep her in our sights for the whole race at that point. He was running strong and happy.

Then we hit mile 2.5. Around this point in the race we were on the main road which was shoulder running and felt crowded for him. He was reaching his max training distance (3 miles) and fading fast. I started to try to encourage him saying, "Soon we'll hit an out and back and we'll get to see runners in both directions. It will be so fun!" He said, "Mom, I don't like it when I see faster runners going the other direction." So I quickly said, "Then that part will be over soon and you can look forward to being done with it."

We continued our back and forth banter until finally he just told me to stop talking. I obliged and pretty soon we hit the water stop. He was overdressed in pants and happy to see water! We stopped and walked through the water stop. He said, "Mom I'm good with dropping to 10 min/mile pace. I have no goals now but to finish." He reminded me that his longest training run was 3 miles and shared that this run hadn't gone so well. Soon we saw Elizabeth heading back the other direction. She was also over dressed in a really heavy long sleeved shirt that I noticed was now tied at the waist with her sleeves rolled up. Clearly our parenting skills were not dialed in that well in the morning! After seeing her, Xander said, "Oh dear I have to tie my shoe!" I looked down and saw him pretending to tie his shoe (which was triple laced). Hmmm. We laughed about this one.

We continued on, slowing more and more until shortly before mile 4 he was out of breath. He abruptly stopped and said he couldn't breathe. He was struggling and we stopped to walk. I encouraged him to take deep slow breaths to regulate his breathing and picked a landmark in the distance to begin a gentle run again. This was good. He felt like he was going to throw up, and was feeling defeated. I reminded him that he was almost 2/3 done and we'd soon be hitting our downhill return. Our next mile was rocky. I talked too much and he snipped back each time I said something. Xander and I spent much of our winter together on a ski lift and this reminded me of winter. Races sometimes lead to sniping, and this was no exception.

Soon it was mile 5 and the Half Marathon lead runner passed by us! Wow, this guy was flying. We both marveled. We started to see more spectators along the road cheering us on. People were wonderfully encouraging to Xander and I felt him get his 2nd wind. Pretty soon we were back at our 9 minute mile pace and he was asking how much farther we had to go. I heard the ladies behind me discussing whether to sprint it in or not. One wanted to and one had no energy and told her friend to go for it. I asked Xander if he'd like to speed it up and he said, "you can but I'm not going to!" But in a matter of seconds the ladies behind us both picked up their pace so naturally so did we. He had a nice strong kick to the end where Ian was announcing people by name! Dawsons 2 and 3 had arrived. Now it was time to wait for Scott to finish his half. 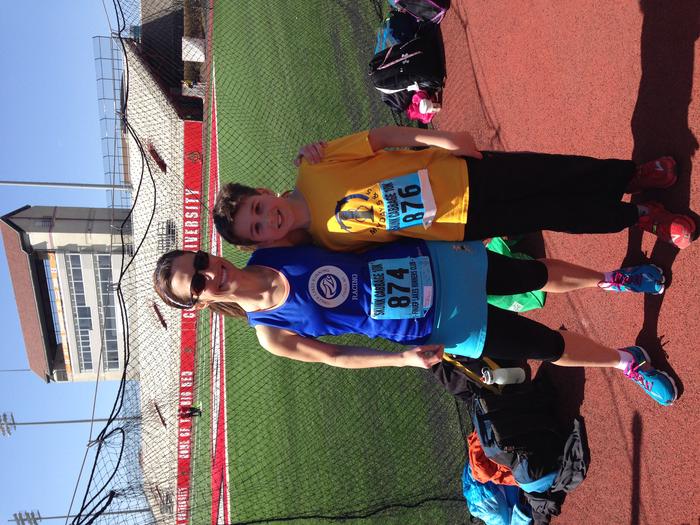 We grabbed some water and walked back to watch for Scott. Elizabeth was off running 2 extra miles so we knew she'd arrive back pretty soon to join us. It was so much fun watching all the really fast half marathoners arrive in! We saw friend and fellow teammate Ellie Pell come in as the first female finisher! Soon, Scott crossed the line 4 minutes faster than he did last year. Elizabeth was back by this time so we all ran in to greet him. Soon we were saying goodbyes to our teammates and heading back to Trumansburg for the final performance of Spoon River by Encore Players!

I was so proud of everyone in my family today. Elizabeth ran a strong first 10K (though she makes sure that I note that she has done a half marathon before), Scott had an amazing half marathon race finishing 2nd in his age group. Even with all our sniping, Xander did really well for his first 10K, finishing in 1:02:15. We hugged after the race and he was immediately sorry that he was snippy with me and I was sorry for talking way too much! He's excited to train for the May Day 5&5 coming up in a few weeks now. I had fun pacing my little guy, not being nervous for an event and just enjoying the first spring day that also just happened to be my birthday. However, next year I'm running the half! I admit I was jealous of Scott's medal!! For more pictures of Team FLRTC and my family, check out Scott's post about the Skunk.