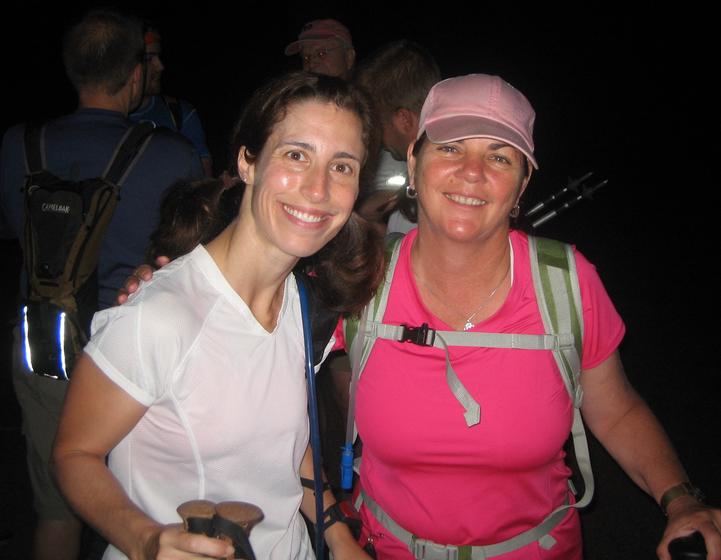 In the fall of 2010 I wasn't really running much. Scott and I had our annual challenge, but we didn't consider ourselves to be athletes. At a Labor Day party on my deck, a friend casually mentioned the Rachel Carson Trail Challenge. This event, held on the summer solstice, is a 34 mile trail race. The course has 7,000 feet of elevation change over the 34 miles (most of it NOT gradual), with a 15 hour 4 minute cut-off. One of the men at the party shared that he'd raced this event a few years prior. He RAN the entire thing and won either his age group or the whole race!!

This would be a wonderful annual challenge. Scott wasn't interested at all, but my friend Kathey and my friend Stephanie (the one who told me about it) were definitely in. We got a crew of 5 together and signed up. Signing up was no piece of cake. The Rachel Carson trail challenge fills up fast! But we got in, and commenced training upon acceptance to the event. Check out the elevation profile!! I was a little bit scared after I looked at this.

Kathey and I trained together by walking a local trail over and over again!! It was an extremely cold spring, and we spent much of the spring hiking in chilly, wet conditions. We waffled back and forth about whether to use hiking poles or not, whether we planned to hike together and should we run at all?

After several months of training we agreed that we'd try to stick together. Stephanie and the rest of our crew were faster than Kathey and me, so we'd likely let them pull ahead and then just work on finishing within the time limit.

Kathey and I made the 6 hour trek down in Kathey's car. It was a long drive, and we arrived tired and hungry. Our kids were little and it was a big deal to be away from them for the weekend. After a fiasco on the turnpike (we went through without getting a ticket and had to pay full fare for one exit), we finally made it to packet pick up and then our hotel. We met up with the other 3 members of our group and promptly found an Italian restaurant for a pre-event meal.

Then the real challenge started. After saying our goodbyes to the group and we headed to our hotel room. The Rachel Carson trail challenge starts at 4:30 a.m. so we planned to fall asleep promptly! Only, I didn't. I was up for the entire night. I was worried about the event. Could I do it? Would I finish in time?

As I write this almost 6 years after the event, I laugh quietly to myself. Just this morning I awoke at 4 am to drive 3 hours to take my son to a ski race for the day. I went to bed the night before around 9:45, fell right to sleep and 4 am is just an hour before my now normal wake up time. Back to 2011 though. I didn't keep those hours back then. Tonight, the air conditioner on the wall was loud and the blanket wasn't heavy enough. Grateful when my alarm went off, I donned my hydration pack, compression socks and got ready to face the trail. 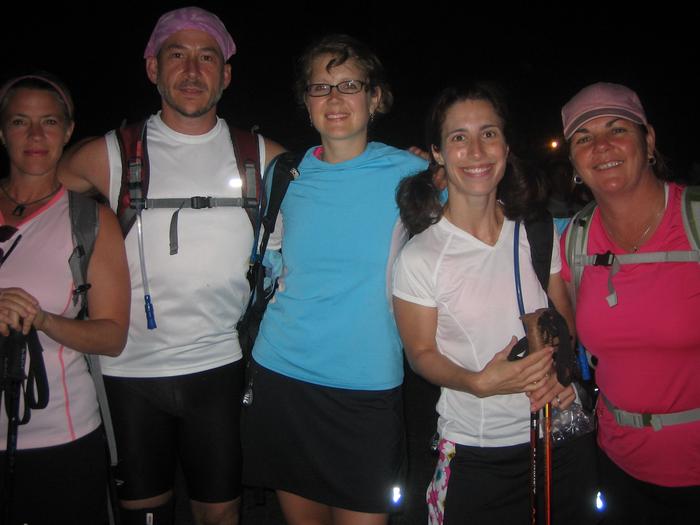 We all ended up going our own way!

Ready for this challenge!

We all gathered together at the start and began as a group. It was dark, but because it was the solstice the light was already peeking over the horizon less than a mile into our journey. Kathey and I had agreed to stay together. The only thing; we didn't. In less than one mile's time I was away from everyone in the group. I don't know exactly what happened, only that we barely walked 1/4 mile together. Our Kathey/Kathy duo did together for awhile, so I guess when you consider that Stephanie and Chris mostly stayed together, I was the one who actually ditched everyone. Somehow I was off on my own from almost the beginning - something that wouldn't surprise anyone who knows me well.

I had decided to pack hiking poles because of the extreme elevation changes. Early in the event, I was already grateful for this decision. We had to cross several streams. I was with a group of locals who were chuckling each time we crossed along perfectly placed rocks. "We put those there," they said cheerfully. This is fun, I thought as I used my poles to steady myself across each little crossing. I realized that if the rocks weren't there or the water was a bit deeper, I'd be starting the day early with wet feet. Today my feet would stay dry.

The Rachel Carson trail challenge course takes you up a lot of power cuts. The hills are very steep and exposed. It was warm and sunny and really muggy. As I watched people grab ahold of the occasional tree to try to get down the steep faces I said aloud, "I love you poles." I was Grateful for my sister's advice to bring them, and to myself for heeding the advice. I ran a lot of this terrain, and was happy about this, especially considering I didn't really intend to run.

One of the steep inclines.

Late in the race (mile 20 or so), I ran into an aid station. I quickly grabbed some food and refilled my hydration pack. As I ran out of the place, two men were hobbling in. They shouted, "You look great! You go girl." I picked up the pace and trotted off, happy as a lark in my Running Skirts compression socks. I was also wearing my favorite skirt from Skirtsports, so I had the skirt company gear covered!

After coming down like what felt like the steepest decline of the entire race I suddenly saw Stephanie and Chris.  I was so surprised to see them. I KNEW they were ahead of me and I didn't think I had a chance in the world of catching them. We went along for awhile together, refueling at an aid station, and chatting happily. Stephanie and Chris were newlyweds, so I was a little worried about crashing their twosome, but my fear was unfounded. They welcomed me and I enjoyed their company.

Just a few miles into our journey together though, Christ started flagging. His calves were cramping and he was in bad shape. Suddenly Stephanie faced a dilemma. Should she let him sort this out on his own and continue on with me, or should she stay with her husband? I didn't envy her choice. I knew my GPS had about 14 hours of battery life. As such, I was really happy that I was cruising along. I felt guilty, but I knew I'd continue on by myself if Stephanie chose to stay with Chris.

Ultimately Chris convinced her that there was nothing she could do for him. He was at risk for not hitting the cut-off time and if she stayed with him she would be too. "Go on and I'll be ok," he said. So on we went. Stephanie worried whether she made the right choice, but she convinced herself as we continued that it was the only choice. 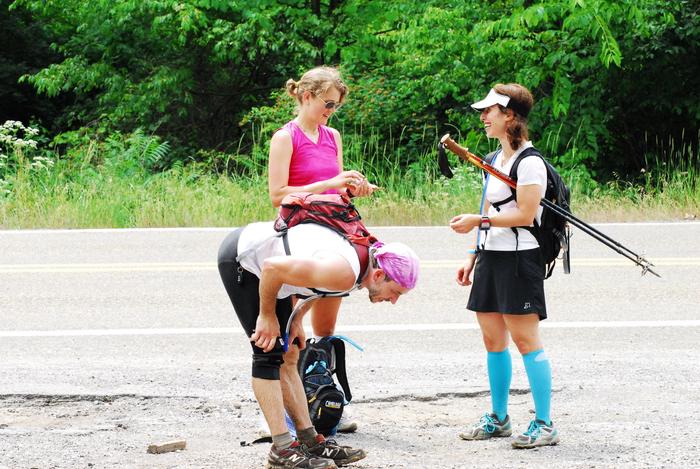 So happy to catch Chris and Stephanie

We had heard that there was beer on the course around mile 30. Sure enough, as we crested a hill it was like a little oasis. Beer!! It tasted so amazing to us and we were just so happy to realize we had only 4 miles to go. Mostly walking at this point (Stephanie actually walks almost as fast as I can run so I was probably walk/running), we were nearing the end. I kept looking at my watch to see if the battery was going to hold. When I realized I would have the whole track for the day I was really excited!! Sadly, it was before I ever heard of Strava so I don't have any record of the track now.

We finished in just under 11 hours. I was 100 out of 457 participants and I was super proud! View Official Results. Stephanie and I waited for our friends. Stephanie's friend Kathy came in just over 12 and a half hours, Kathey finished in 16:01 and Chris crossed the finish line in 16:48. 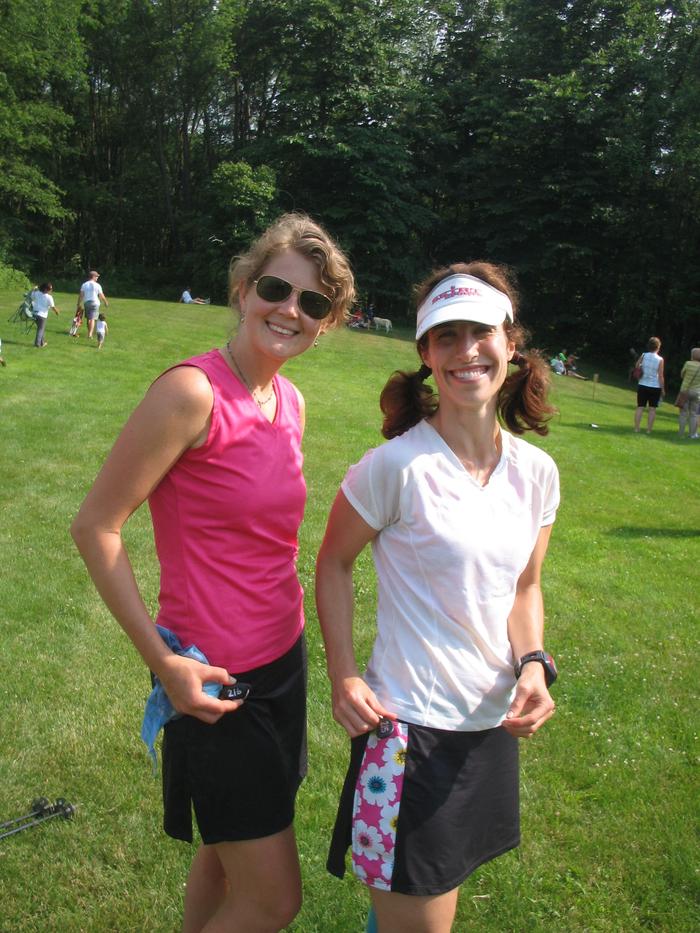 This post would NOT be complete without sharing about our drive home! When we finished, Kathey and I were DONE. We wanted to be home with our husbands and kids, and we were totally high on adrenaline from the event. Kathey promised that she would keep me awake if I could drive. I promised I could drive if we could drink Diet Coke, and eat m&ms and potato chips. Of course!! This is something else I laugh about almost 6 years later. I stopped drinking Diet Coke after one too many documentaries about food several years ago.

We listened to NPR, we listened to books on tape, we tried music, and we got TIRED. We arrived home around 4 a.m. I think Scott was on the elliptical in our home gym at around midnight just trying to stay awake for me.

Of course the next day was filled with hours of sharing, reminiscing about how amazing the Rachel Carson Trail Challenge was and time was spent reconnecting with the kids.