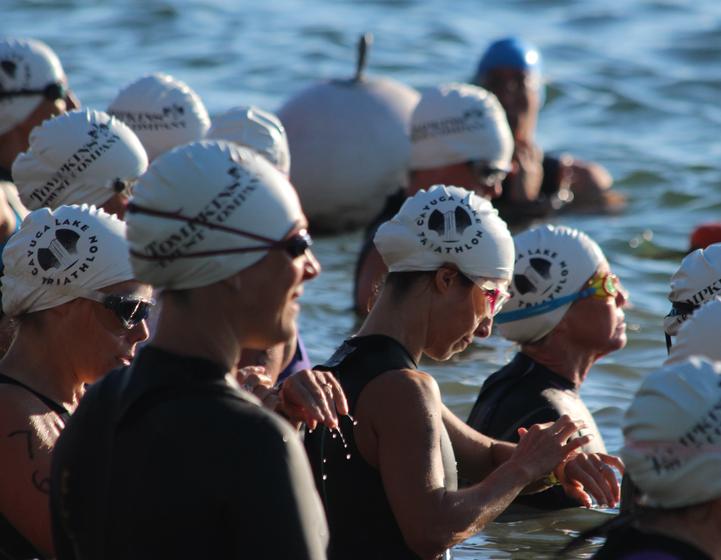 This year Scott and I decided we were ready to give the intermediate triathlon distance of the Cayuga Lake Triathlon a go! I started training with great enthusiasm back in March, roughly following a half ironman plan I found on Beginner Triathlete. My reasoning was that I was also training for the Wineglass Marathon in October and this would keep me in good running shape. I quickly realized that I wasn't in fact training for a half iron and that the focused swim practice was something I wasn't really ready for. As such, I started following Scott's plan. He put the distances in our shared calendar each week and I just did my best to match what he was doing.

This year Xander was competing in the youth division again and Elizabeth and her friend Jessica would give the Sprint distance a go as a relay team. Their name: Chasing fish and scaring snakes!

I planned two sprint triathlons to help me prepare for this race. The first was the Tri for the Y in May and the 2nd was the Gillie Girl in July. Both were great fun and I'm glad I participated.

My run training was solid all winter and then I added the swimming and biking and as the season went on I started to slack on the running. As a result, I now need to hit the ground running (literally) to get up to speed for Wineglass in October!!

Getting body marked by my mother-in-law

I have trained well for the swim this year. I started in the winter at the Island Health and Fitness pool, gradually working my way up to 2500 with 3 training swims a week.

I moved to the lake on July 5th and managed 10 lake swims! Several of these swims were in very choppy conditions and the lake looked like glass for a couple of them! I am so grateful to my friends, Kathey and Bruce for letting Scott and me swim from their lake house as often as we want to. Elizabeth was my faithful kayak escort for most of these swims (Xander joined in on the double kayak for one and Scott accompanied me for a couple).

Typically I do the sprint distance for this race, and that starts late! I have a lot of time to socialize and to think about what's coming up and to watch the water conditions. Today my wave assignment was FIRST! Nutrition was easier (just eat at home), and I had hardly any time to stress or to socialize. Before I knew it, it was time to pop into the lake! My training sessions had ranged from 43-56 minutes per mile, so I expected and hoped to hit 45 minutes for the 1500 on race day. I truly thought I could do better than 45, but ultimately ended up hitting this goal.

I started near the front third thinking that it would be easier to be passed than to pass people. I swallowed a bunch of water early on in the chop but settled into a nice rhythm by the 4th buoy. As I comfortably breathed bilaterally I thanked my swim teacher, Shane - WOW - "I could never have done this before his class." That morning when I looked at the yellow turnaround I thought, "that's not too bad."

The swim was mostly uneventful. I was passed by a lot of people, but I kept my steady rhythm. I hit the sprint turnaround at 10 minutes and the halfway point at 24 so I was disappointed at having lost time in the 2nd quarter. The way back was demoralizing because the green caps (wave behind me) started passing me in large numbers and soon I was being passed by wave behind them. I had convinced myself that I was the very last swimmer from my wave by this point so I lost some of my positive attitude. My kids confirmed later that there were people behind me from my wave, so I felt a little bit better about my efforts. However, once results were up I HAD to go check to confirm this. Yes, in my entire wave of women ages 35 and older I managed to be faster than 7 of the 56 participants. My gut feeling that I was near the back was very correct. I was proud of one part of my swim. Near the halfway point,  my goggles filled with water and I stopped on the buoy line to empty them. Last year I would have panicked about this, probably ended up shutting my eyes and swimming erratically just to avoid the need to stop and regroup.

I grabbed a Gu and took in a bunch of water before heading on the bike. I learned from my friend Lynn that it works pretty well to ride without socks so my transition was quicker than if I had put socks on. I headed up the hill and got into a rhythm and soon I heard my friend Michael behind me saying, "your seat is too low and your knees are splaying out. I don't think you are getting a full rotation." I have a feeling this is what the woman was trying to tell me in my first group ride a few weeks ago but somehow it was easier to hear from Michael. Note to self, "must check out seat height."

I have no idea what was up with the start to this bike, but I had a really slow start! I had faster training rides with my kids up this hill and faster splits on 50 mile bike rides so .. anyway.

I got a boost when I hit the top of the hill when I saw the entire Knapp family out watching and cheering! Then, I passed by my friends the Mulfords who were also out cheering and got my second boost. When Scott passed me at mile 6 I looked at my watch and saw it had been almost 29 minutes already. Yikes. Slow enjoyable bike ride needed to end now! At this rate I'd end up with a nearly 2 hour bike time. I'm rather grateful that Scott passed me early on and I kicked my own butt to speed up.

This ride was a little like a training ride for me. It was lonely. I passed a few people and got passed by many, but I was never around people the way you are in the sprint distance (until we folded back into the last 7 miles). I enjoyed it though and did hit my goal of getting an average pace of over 15 mph (I wish that I had hit 16+ but given my start my pace was in line with my expectations). 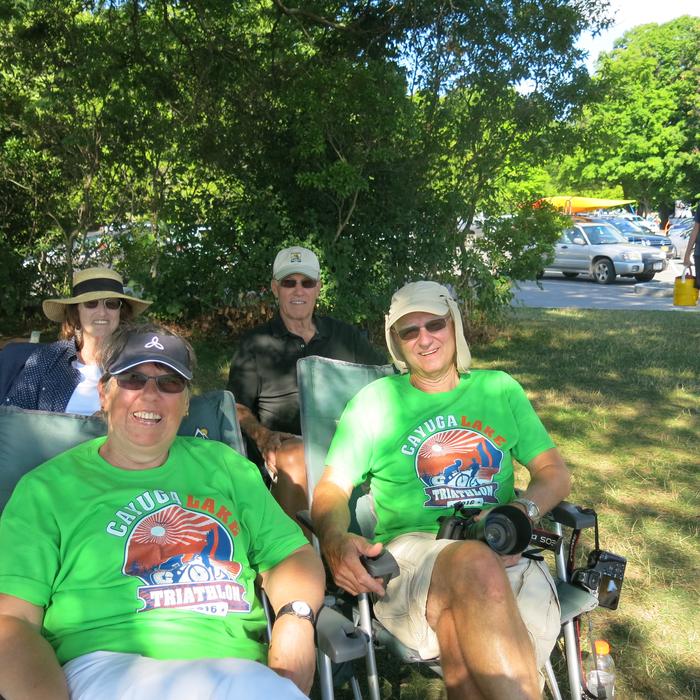 Every year when I run this I see the intermediate distance folks and think, "those poor people are doing this course TWICE." Today that was me. And you know what - it isn't that bad! This course is actually A LOT of fun. The first time out you can take it all in, set a comfortable pace and think, "I get to do this twice." I loved running by the water stops; each had a unique personality. I loved seeing people coming the opposite direction and cheering them on! This is the part of the race when I really realize just how many people I know along the course, both the participants and spectators and the volunteers. This is what makes this race so special for me. The vibe is so positive and fun!

My first 3.1 was about an 8:45 average and by the time I ended the 6.2 it had slowed to 8:57. I really thought I'd be lucky to be sub 10 after the other two things so I was reasonably happy with this performance. My friend Pete and his wife Hayley were out on the course and they snagged a picture of me running. 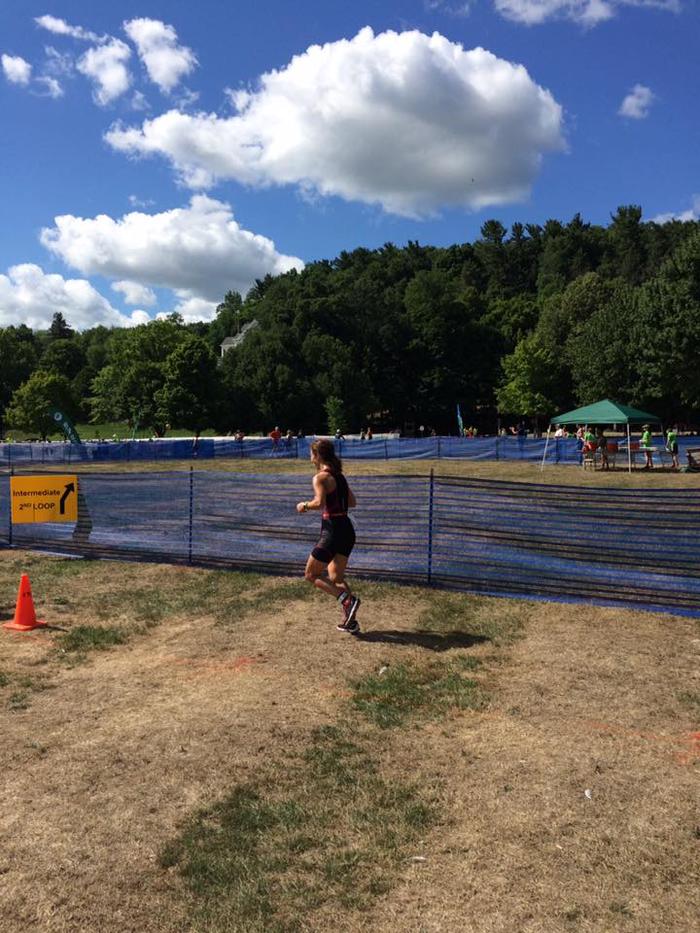 Getting ready to start the 2nd loop!

This is a great race. It is FUN! It has fantastic post race food from Wegmans! I mean only in Ithaca can you even get the Wings of Life salad and they bring it to the race in a wrap. Free Ithaca Beer and Purity Ice-Cream. What more could you want post race?

The race is SO well organized - on the run course I think that every possible root or tripping hazard is marked in spray paint. There are fabulous volunteers at every possible location cheering you on, and the spectators line the course. This was my first time doing the intermediate distance and I was pleasantly surprised to see how many people were out in Sheldrake cheering all the bikers on. That is the most beautiful part of the course, and the crowd support was really awesome!

The lake? Well, that's some people's biggest worry. I fall into that camp. I've learned from Shane to embrace the day. Accept your limitations but don't dwell on them (ok I did dwell a bit on my swim results today but not as much as I could have) and remember everyone has to swim in the same conditions. One great thing about this race that I now know is not at every race is the wonderful buoy line. Really you can't get lost or very far off course with this line. Plus you can count buoys to keep you focused.

Thanks to my parents and my in-laws for spending their morning down at the lake watching our entire family participate in this. It has become a wonderful family tradition for us all! Thanks to Scott's parents for taking great pictures for us! Check out the rest of the pictures and read all about Scott's race on his blog. Interested in other race reports from the day? Check out Katie's blog and Laura's blog. 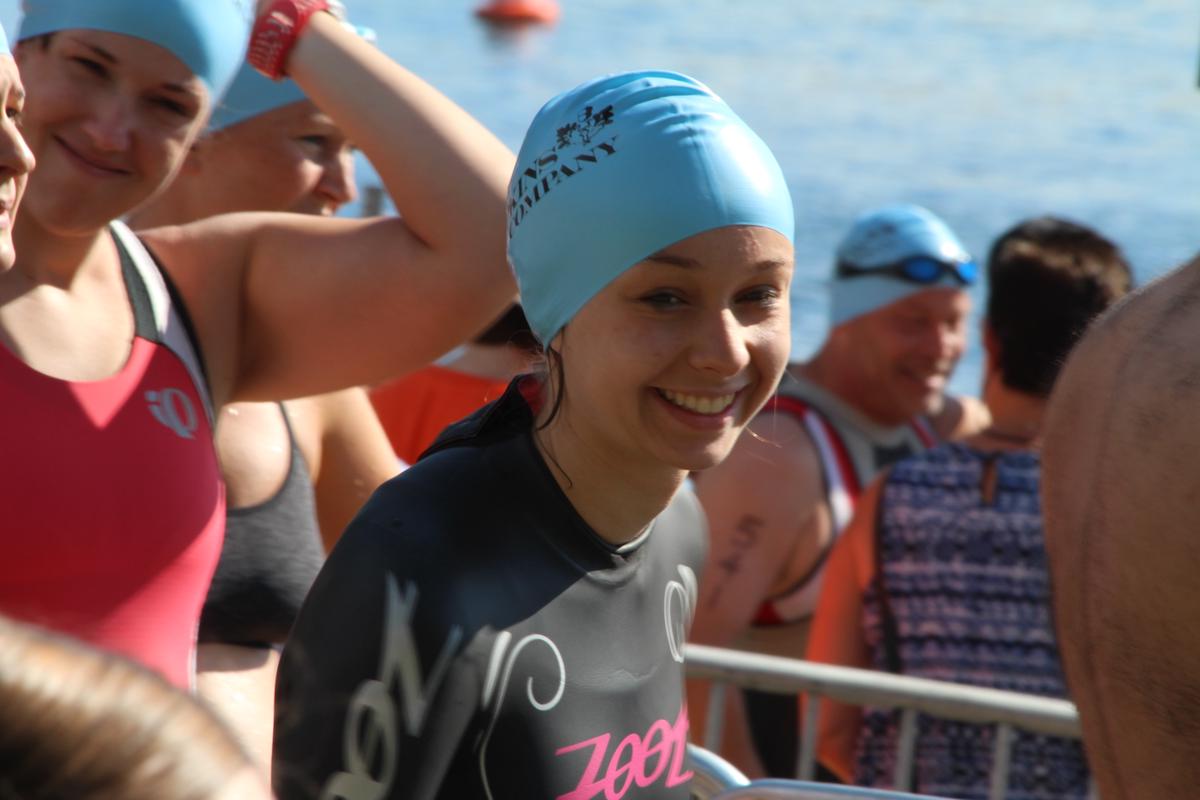 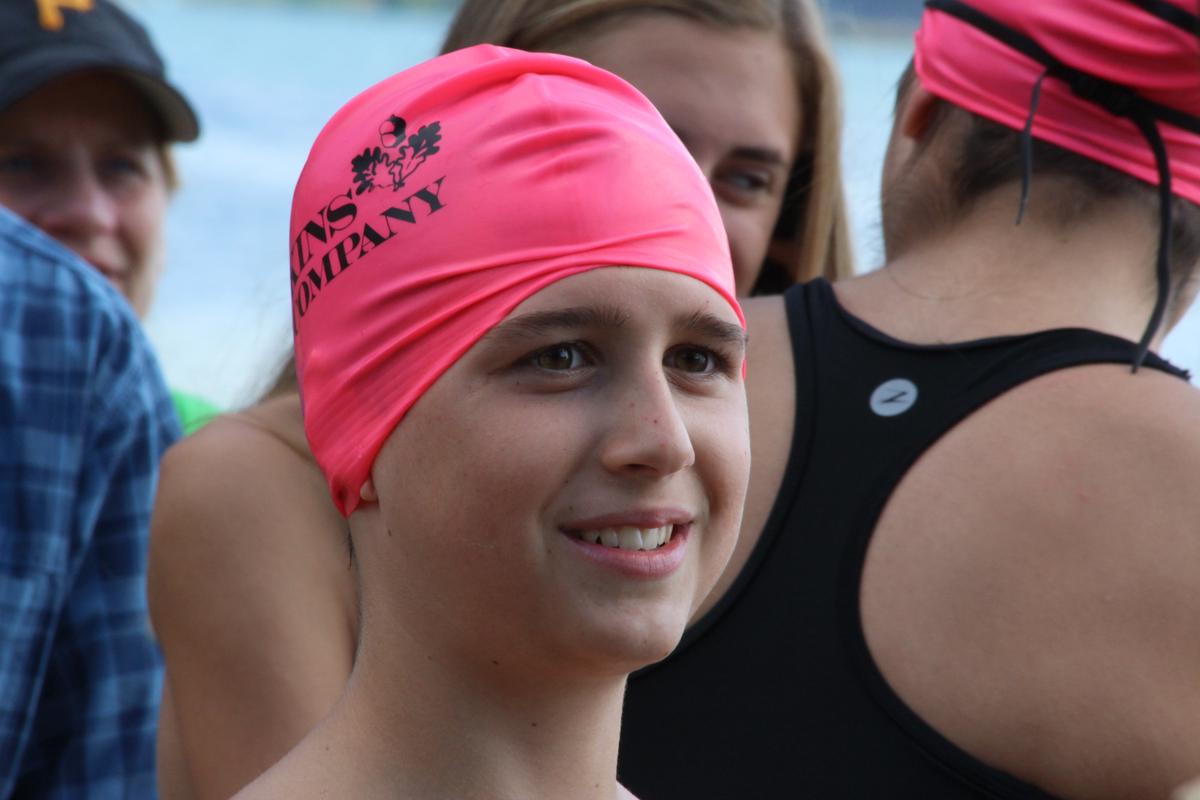 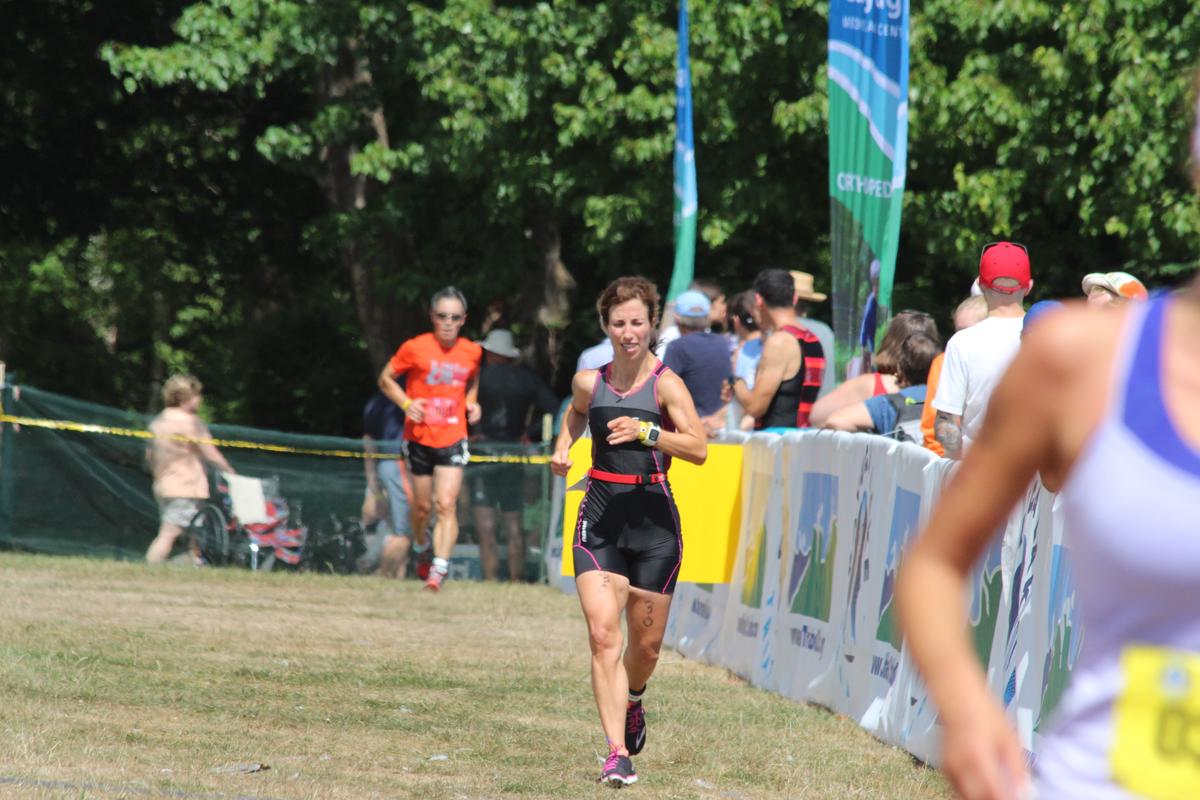 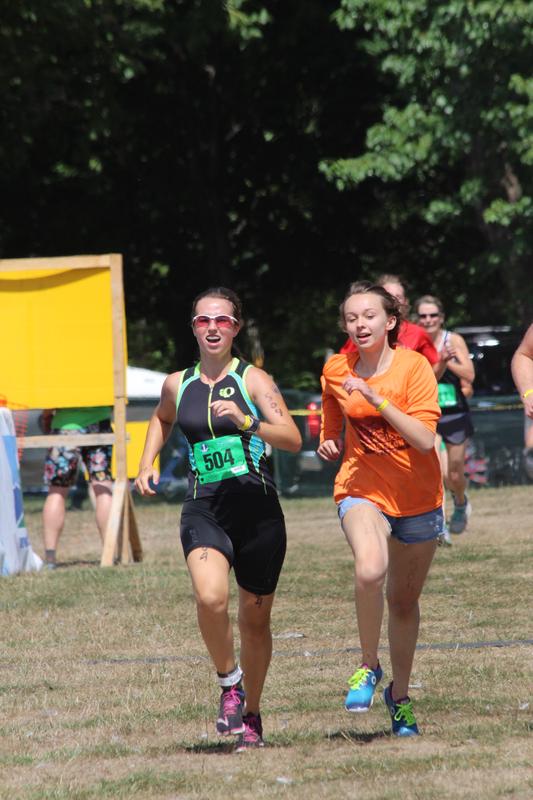 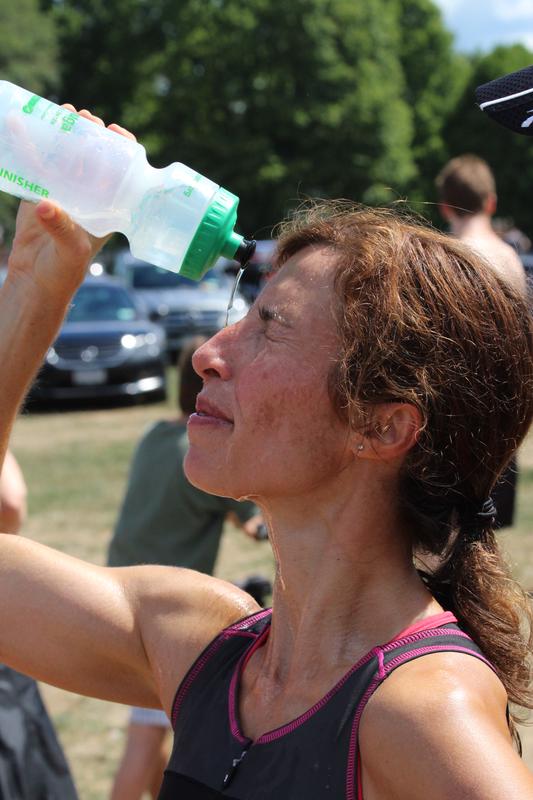 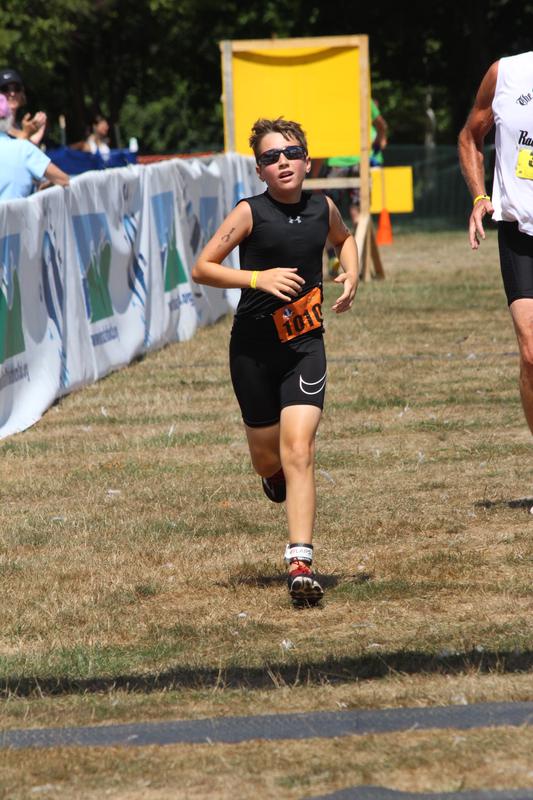 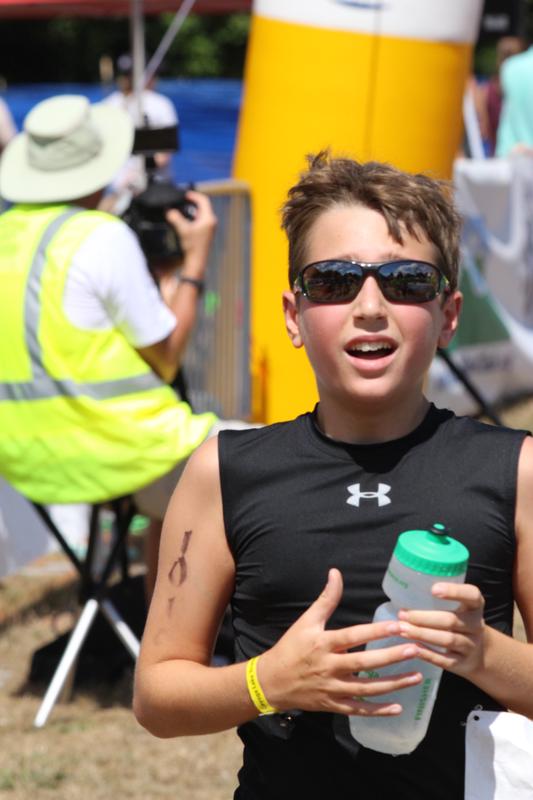 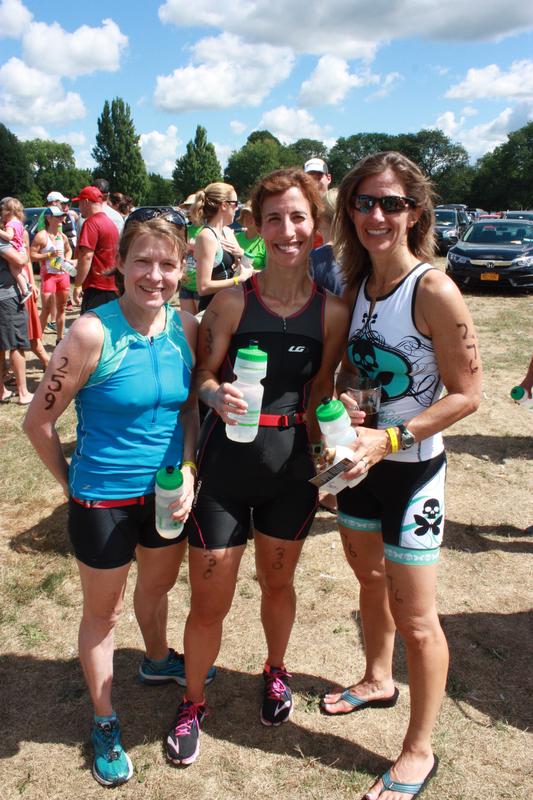