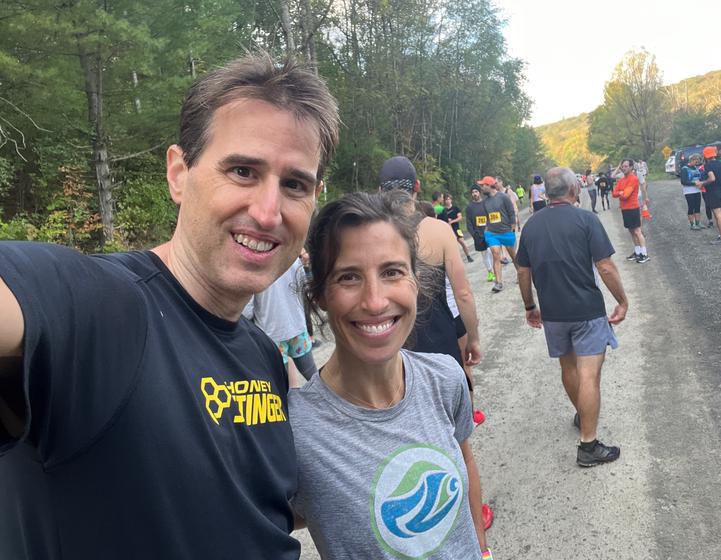 On the trails again

The first time I ran a trail race I had never really run trails. Enamored with road running, I thought, “What can be so hard about trails?” I signed up for the 25K of the Finger Lakes 50s with Scott almost on a whim. It sounded short and easy compared to the other two offerings in the forest of 50K or 50 miles. It was most definitely not easy.

I signed up for the Thom B run with my friend Stephanie with a similar level of preparation (almost none). I’ll always remember standing at the start with Joe saying, “keep one eye on the trail markers and the other on the trail” as we began the race. Shortly into the beautiful trail I fell. Just a bit later I got lost. I was so busy chatting with Stephanie that neither eye was on anything! We came in last and second to last that day and I went home feeling a little embarrassed.

This year, the FLRC Challenge was my big thing (see my athlete page). It was my running rejuvenation and my focus. The challenge provided needed respite from my familiar 4 mile loop, my 8 mile out and back, the goldfish shaped 6 miler and the myriad other options that started from my front door. All of these routes are great, but a change of pace was needed and I figured the FLRC Challenge would be just the thing to get me onto some new courses. As with most everything I do though, I never really looked at the courses. It wasn’t until a few months in that I processed that there were actual trails to be run. Not a trail like Green Lakes or Black Diamond with its nice packed cinder surface and comfortable elevation change, but a trail with mud and elevation gain and loss and … well real trail. Scott and I made a pact to stay together for the first running of each trail and we used the Run Go directions on the routes we didn’t know.

The thing about most anything is that the more you do something, the more comfortable it becomes. My first run of every trail was hard, but as we got going I started to really look forward to these courses! So, after doing the Danby Down and Dirty once with Scott (and ending the route with snakes sunning themselves on the bridge), it seemed extremely logical to go ahead and sign up for the actual race in October. We reasoned that it would be our 2nd (and last) attempt on this trail. We wouldn’t have to worry about animals and there wouldn’t be any snakes because there’d be so many people.

It was a gorgeous fall day! I worked for several hours in the morning before it was time to get ready to go. We popped over to Cornell to deliver cake on the way and then headed toward the race. I had the familiar pre-race I’m going to throw up feeling but I knew it was just nerves. Soon we were parked and I faced the decision of whether to keep my long sleeves on or switch to short sleeves. I quickly decided on short sleeves. After chatting with a few friends it was time to run. The first mile and then some is downhill on a road. Someone was complaining about that before the race started. I smiled and said, “That’s the best part.” This person was all decked out with a hydration pack and looked super hard core. They looked at me rather oddly. I felt a flash of imposter syndrome. “I’m really not a trail runner,” I thought. I had no more time for thoughts. The race started moments later and I started my happy jog down the road. I could have warmed up. I could have run faster. But, on this sunny October morning I was content to jog along knowing that the trail would soon be upon me.

As we turned into the woods, a course volunteer warned us of a muddy entry. Yup. Splash into the mud I went. The trail quickly went uphill and we fell into a single file mostly hiking line of people. I get anxious on the single track knowing that people may want to pass. I tried to push those thoughts out of my head. Soon it leveled out and shortly after that I let a whole crew go by me. I literally stood to the side and said, “you go ahead.” At the moment it felt necessary, but as I look back I wonder, “why didn’t you just stay up with them?”

The long tail .. isn’t there

A bit after the halfway point I caught a friend that I ran cross country with. We had a lovely conversation about trail racing. She’s faster than me on the road and in cross country. She also signed up for the FLRC Challenge as a way to get out to new courses. She laughed as she shared that she really didn’t expect to not like the trails. She thought she’d enjoy them, but they hadn’t turned out to be her thing. She shared about running the Forest Frolic. Her story was eerily similar to my story from that same race when I did it years ago. She started and almost immediately she was behind the pack - alone.

Road running attracts so many paces. New runners are always joining. Of course there are very fast people, but it seems to me that the barrier to entry isn’t as high as on the trail. So, when you are a pretty strong road runner, sometimes that switch over to trail is tough. You are used to more people finishing behind you. We talked for a half a mile or so and bid each other farewell. There was a nice downhill stretch that I felt like I could speed down so I did.

Back to the scene of the snakes

When Scott and I ran this course the first time we split up for the last mile or so. I knew I was holding him back a lot. I was whining and he wanted to run. I told him to go on without me and I’d see him at the end. When I emerged from the last single track I saw him with a group of hikers. “There are snakes on the bridge,” he said. I thought he was joking but it was quickly clear that there were in fact snakes on the bridge! Because of the group of high school students, I put on a brave face and crossed the bridge after Scott coaxed the snakes off.

In the race as I approached the last bend my body stiffened up. The bridge is near. This is where the snakes were. I knew there would be no snakes today. There were too many runners. Still, I was fearful as I gingerly crossed the wooden bridge. I noted my FLRC Challenge split as I passed the sign for that and then headed up the last hill before the finish.

I ran by the last aid station and heard my friend Joel giving the choice between stopping after the 10K or going on to do a 20K. I took the turn for the finish and ran in. Scott and I enjoyed a donut and chatted with people before heading home. That familiar hopeful feeling that always finds me after a race was back. It was so much FUN to see people and run with others. It was such a great challenge for me to push myself to run trails. I know running trails is challenging and GOOD for me. It builds my strength, draws on my core stability and keeps me focused on the moment at hand.

With just a few months left in the FLRC Challenge, I’m definitely looking forward to getting many more challenge course runs in!

There are 67 other posts like this one. Here are some other recent ones: