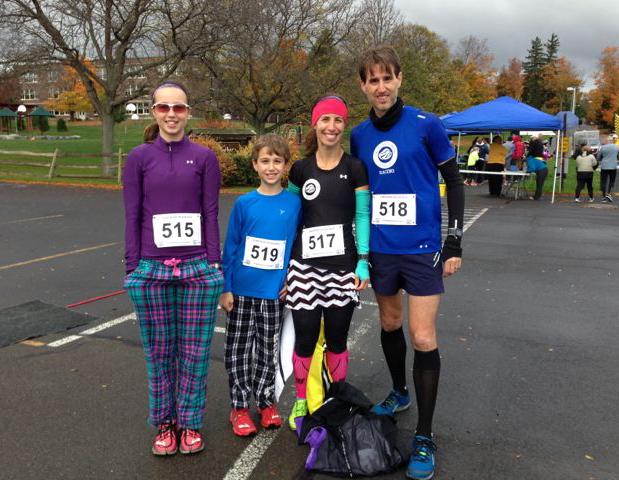 A week before the race - Injured!

A week ago my hip and side started hurting. Naturally, I still did my long run and of course still attended BodyPump and practiced swimming, and ran some more until it hurt A LOT even to walk. Tuesday of race week I came home and told Scott that it was so bad I thought I might have bone cancer. His natural response was "have you rested it at all?" followed by "maybe you should see a doctor." I promised him I would call and promptly emailed three running friends for advice. They all advised rest followed by a call to the doctor if it didn't improve. Two days of complete rest followed, during which time I tried to remain pleasant to be around, but failed miserably. I drove Elizabeth to dance on Wednesday and instead of spending my time in a coffee shop catching up on things or doing errands, I went to the gym to work in the common area. Hey, I could at least see people in the gym this way! I talked to several people from BodyPump as they finished class that night, and everyone gave me a pep talk. I was feeling more positive by Thursday. By Friday I decided I'd better see how things went with exercise and joined the PTO group hike, practiced swimming, and went to BodyPump. I raced home from class to take Elizabeth to a school dance, and headed out for an easy 4 miler. It was dark, and I was happily running thinking "yes I am ok!" -- "resting works" -- "this is GREAT!" -- and then -- "wow, it is Friday night and I just had lima beans for dinner and am out running ... I am pretty lame" -- when suddenly everything seized up. I sadly limped home. I tried a couple more times to run, but just felt defeated. I finished the evening with yoga but it was half-hearted. I wasn't sure I'd be able to run, or even walk, this race. I whined a lot. Saturday was a long pity party. But, Saturday night I thought it was time to try a 2 miler and make the decision. I ran an uncomfortable 2 miles, but the pain stayed the same, so I decided to run in the morning.

The night prior I gave myself 3 options for the race: race it, make a pacer sign and be a 30-35 minute unofficial pacer, or find someone who needed company and planned to walk and walk the event. That morning I ruled out the pacer idea. I wasn't sure if that would be too silly and didn't want to carry a big pacer sign by myself. I also quickly nixed the walking idea because it was 39 degrees and I figured running would warm me up faster. I asked a couple of people if they'd want to just run the race without racing it, but that didn't fly because they had plans to run with someone already or wanted to race. So, ultimately I stood on that start line and decided to just give it a go. After all, the faster I ran the faster it would be over, right? And, even though I had been so waffly about racing that I hadn't taken a pre-race picture for team FLRTC, I did wear my logo gear and was representing Finger Lakes Running and Triathlon Company on the course. This fact really impacted my decision to ultimately put forth my best effort. Fellow ambassadors Scott, Bill, and Jeff were also running today.

I had a solid start and held a 7:15 pace until the 1.5 mile mark. I ran near both of my kids for about 50 feet and then wished them well and sped a bit ahead. My pace slowly tapered off for the second half of the race. As with the Wineglass Half, my erroneous mid run calculations and an incorrect average pace on my watch failed me, putting me 11 seconds off a PR. This was upsetting not because I really deserved a PR for this waffly race morning decision, but because I really had believed my watch average pace of 7:30 and purposely held it there to avoid pushing too fast and risking completely running out of steam. In fact, my pace was 7:41, and I genuinely feel like I could have run just a smidge faster to hit a new PR!

The kids both had a great run. Elizabeth came in just over a minute behind me, and Xander was about 30 seconds after his sister. Scott came in 2nd for the whole race and had a 2-second PR! He is quick to point out that this isn't really a 2nd place finish because the Varsity boys were volunteering on the course instead of racing today. I told him to enjoy the slot!