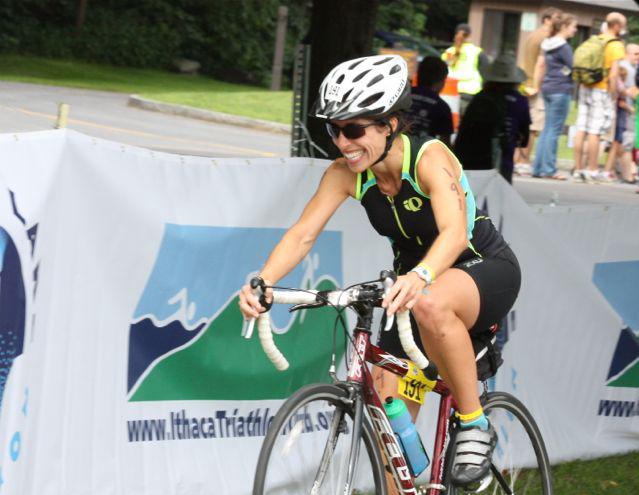 This year will be the 4th time that I have signed up for the Cayuga Lake Triathlon (sprint distance). This started as one of our annual challenges, and has since turned into something that Scott and I just do annually. Since doing this for the first time, I've become a much stronger runner but I haven't really worked at swimming or biking. Fortunately, I'm not scared on the bike and while my time won't break any records, I feel comfortable with the distance.

Swimming is a different situation entirely! I've taken lessons, including an afternoon long immersion class. Last year I followed a plan to work toward swimming a mile. Following it religiously, I was able to swim a full mile by the end (albeit very slowly)! This year I've been focused on running, and rather deliberately putting off swimming. 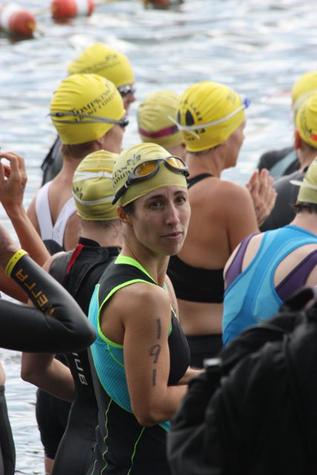 Before the Cayuga Lake Swim

With the race rapidly approaching, it is time to get into the pool, and hopefully into the lake before too long!! On June 30th, I had a 20-minute span of time and timidly made my way to the pool at Island Health and Fitness. Every lane had a swimmer in it. Have I mentioned how scared I am to share a lane? Usually I pick the lane that appears to have the slowest swimmer in it, but on this particular night the slower swimmers were in the outside lanes, and they were doing breast stroke. Not wanting to be hugging the wall, I chose a center lane.

As the woman in the lane neared me I leaned down to ask if she'd mind sharing a lane. She looked up at me and said "Amy, right?" and proceeded to introduce herself, "I'm Emily. I know you on Facebook from Team FLRTC." Oh, yes! "Petrina, right?" and we laughed that we knew each other virtually, having never met in person. I said "I can't swim", and she said "That's ok, I'll stay on my side." I hopped in.

This was the best first swim for the tri! No, I wasn't a lot faster. My pace was what I expected. Yes, Emily sped by me over and over, but instead of being fearful and feeling bad about my swimming, I watched her stroke. Noticing she was hitting the water twice as fast as me with her arms, I tried speeding it up. I focused on my breathing and realized I'm in better cardiovascular shape than last year, probably because I've been training for the Green Lakes 50K. I even tried alternate side breathing a few times! The power of a team! We are both ambassadors for Finger Lakes Running and Triathlon Company. Part of a group. I felt inspired to be in the pool with her, happily sharing a lane. 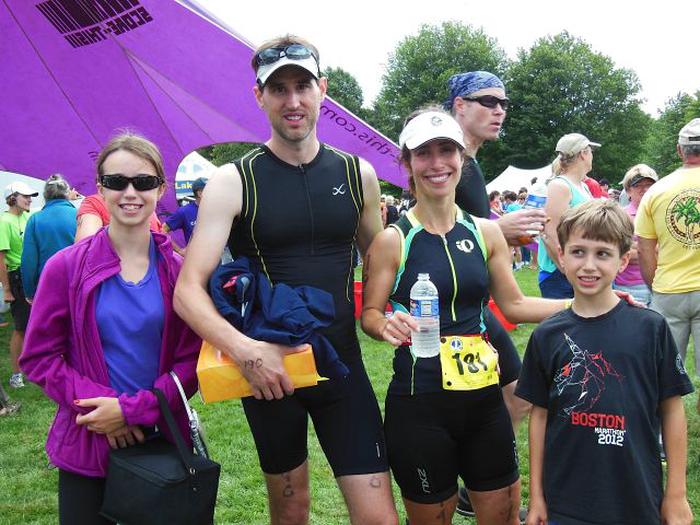 Finished! With Elizabeth, Scott and Xander

And the 20 minutes? They breezed by. Before I knew it, I was done with my 800 yards and zipping up the hill sopping wet and just a bit late to pick Elizabeth up from dance. I'm going back tonight and I'm EXCITED to swim. Wow!!