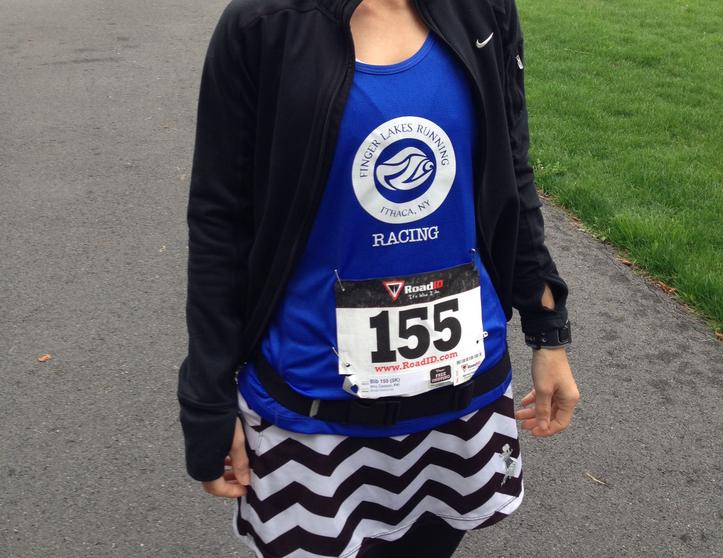 This winter a package arrived in the mail from my sister, who is an ultra runner, climber and hiker living in Portland, Oregon. She knew I was training to PR a half marathon and that my GPS was broken. She packed up her extra one and threw in some trail butter for me to try. Being that it was winter in central New York, I was skiing and running roads so popped the trail butter in my pantry. Out of sight, out of mind, until I didn't get into the NYC marathon lottery and signed up for my first 50K: the Green Lakes Endurance Run.

Last week I brought the trail butter on my long run. About an hour into the run I tried it. Oh my goodness! This stuff is amazing. I saved 3/4 of the tube for Scott to enjoy the next day on his much longer run, and we both became obsessed with Trail Butter.

I looked at all their flavors and got in touch with Finger Lakes Running and Triathlon Company to find out if they carry it, emailed my sister to thank her, and had to mention it in my weekly running summary on my blog. The next day, I was at Finger Lakes Running Company and said to the manager, "you have to get Trail Butter! It is AMAZING."

As we sat down to an early dinner at our favorite Ithaca restaurant before my daughter's dance recital, I suddenly realized that virtually everything I truly LOVE that I own for running has either been directly marketed to me at an event, or via my sister. In fact, I can only think of one thing that I really love that I stumbled upon myself! Here's my list of favorites, how I learned about them, and just why I love them:

The Rochester Half Marathon was my first big race. Milling about in the amazing post-race food tent, I happened upon a small company giving samples of their cherry juice. A half hour later, armed with a sticker with their website I asked Scott how he felt about subscribing to get a monthly shipment of cherry juice. He laughed and told me I was a marketer's dream. This was in 2007. Seven years later, Cheribundi has grown and and changed its name (used to be Cherry Pharm), and we're still enjoying our monthly shipment.

When I first started running, I ran in shorts. They always rode up and looked terrible on me. I tried a couple of major brands of skirts, but the liner rode up too. Thinking it must be my legs, I decided I'd just need to accept it. Then, my sister started running in Skirtsports.com skirts and sent me one to try. Immediately smitten, I bought several more. Later, she discovered Runnningskirts.com, loving them for their fun patterns and cute velcro pockets. She sent me another skirt in the mail to try! I love them both so much!

I have never loved a shoe as much as the Brooks Pure line. Returning to running from a knee injury caused by a too quick a transition to minimalist shoes, I spent a lot of time checking out footwear. One evening at the gym, I saw my physical therapist's wife in the locker room. She was raving about her new shoes. I asked her what they were and her response was, "I don't know. Ian from Finger Lakes Running and Triathlon Company put me in them and I LOVE them!" Well, that was enough for me.  The next week I went to the store and asked Ian what shoe he had put her in. He said "Oh, the Pure Connect." Sold. He cautioned me to start slow because they were a 4mm drop. Post-injury I happily obliged. Several months later I ran the Rochester Marathon in those shoes. Now I use the Pure Connects for speed work and short distances and the Pure Flows for longer distances. I love how light weight they are, and how responsive they feel.

At the 2012 Boston Marathon the temperatures were forecasted to be sky-high with high humidity. My sister Sarah was coming from Portland where it had been in the 50s with nice drizzle, perfect running weather. At the expo, Brooks had this light as air mesh tank that she picked up. It is basically like wearing nothing! I bought a few shortly after Boston and they remain my go-to summer workout wear.

Wandering through the Philadelphia Marathon Expo, Jenny and I stopped at booths, meeting sales people and checking out products. While we had the most fun in the Minute Rice line when Jenny won a set of measuring spoons, the Lara Bar sample turned out to be the best find of the day. Thinking "this will probably be another icky bar," I grabbed a sample size anyway. It was only a bite-sized bit. A week or so after the marathon, I popped it into my mouth after a run. It was amazing, and the part that really sold me was the ingredient list. Everything in the short list was real food! I promptly hopped onto their website to learn more about the company and later that week I bought a box at Wegmans. About a month ago, I tried to make my own. Let's just say I'll be purchasing them for at least a little while longer. My first try at a home version was not a dazzling success.

I never run with sunglasses. I'm a visor girl. But, when we went to watch Sarah run the 2012 Boston Marathon, she had some time to spend at the Expo. She purchased a pair of PSI (Precision Sunglass Innovations) sunglasses for herself and a sweaty band. Marathon day was sunny, hot and humid with temps in the 90s and Sarah looked great with her new lightweight sunglasses and sweaty band for her hair. My parents picked up some Sweaty Bands for me and Elizabeth at the Expo and Scott and I bought ourselves the sunglasses after the event. Now, on the not-so-hot days I love to wear my light-as-air fog-free sunglasses!

After watching Sarah in Western States, Scott and I were inspired to consider trail running. She encouraged us to check out hydration packs and suggested the Nathan Intensity Pack. We decided to give it a go since we'd use them for day hiking even if we didn't pick up trail running with fervor. I was training for the Philadelphia Marathon right after doing the Wineglass Marathon. Because Philly was a destination marathon and I was traveling with friends, I decided I'd need to carry my phone, and I was the driver, so I had to carry car keys. I haven't found a waist belt that won't ride up, so the hydration pack made it to the marathon start. It was great for comfortably carrying my things and it was pretty cool to have my own water. And I LOVE it for training for Green Lakes for trail!

This is my last and newest favorite thing! I wrote about it at the start of this post. Scott and I are so excited to have found Trail Butter. For him, it is in time to use for his last few training runs for the Finger Lakes 50s in July and I will get to use it for most of my training cycle. I'm looking forward to trying all the flavors. One of the best things about being a little bit behind my little sister with my running is that she checks things out and sends all the things that work great for her my way!