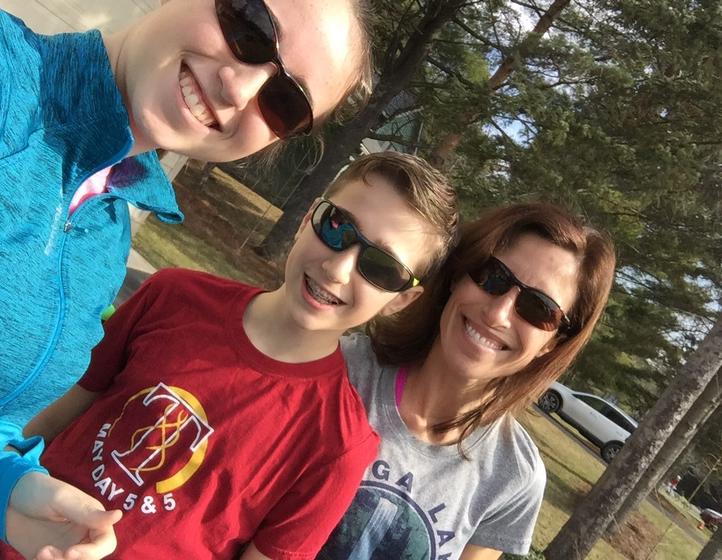 For a whole host of reasons we found ourselves home over February break. We knew the kids would have training for ski racing during the vacation, and the weather is usually pretty good for daytime skiing at Bristol Mountain. In the back of our minds, we thought we would take a day or two and go to Gore and Whiteface mid-week. Then the 10 day forecast came out calling for highs in the 60s for 3 of the days! Sadly, we realized we couldn't get far enough north to get out of this weather! Resorts as far north as Mt. Tremblant had spring skiing conditions with thunderstorms forecasted.

Monday and Tuesday were reasonably ok for training, so the kids went to ski training both nights. Daytime skiing seemed hardly worth it, so we stayed home. Wednesday was forecasted to be sunny and 66 so we agreed to bail on training. After batting around day trip ideas, we decided Scott would just work and the kids and I would do something fun around home.

For a fun non-typical Wednesday activity I said, "What if the we walk to Ithaca on the Black Diamond trail? Daddy could drive in and we can meet for lunch at Ithaca Beer. Then, we can walk home and it will be a 30 mile hike day."

NO. That does NOT sound fun. 3 people STARED back at me at the breakfast table. Xander, always the one to try to please others, said, "Well actually that could be kind of fun. Mommy and I could do it together."

I believed him, so we set about trying to find a time to meet for lunch. We quickly realized that whatever we did, we couldn't find a good time to meet for lunch. Scott would have to blaze in, wolf down food and race back to work. The conversation shifted toward, "maybe we can just walk there and not back" and suddenly Elizabeth was interested.

Soon we had a final plan. The three of us will walk from our house to Cinemapolis and Scott will meet us to watch a late day showing of "La La Land" followed by a late family dinner at Ithaca Beer.

I run this newly completed trail from Trumansburg to Ithaca rather regularly. It is a lovely packed cinder trail that makes you feel like you live in a place like Rochester, NY or Lexington, MA. Every time I head there I remember biking on the Lexington bike path when Scott and I lived in Massachusetts. However, it is less crowded than these suburban trails, and has a bit more of a wilderness feel. I've walked the trail with Elizabeth, but this was Xander's first time seeing the trail.

We left our house a bit before lunch with a fanny pack, some apple slices, carrots and trail mix. Xander was in shorts and short sleeves. Elizabeth wore pants and long sleeves and I opted for capris, long sleeves and gloves. As we left the neighborhood, we chatted with my neighbor for a few minutes and then headed off. As we left the neighborhood I said, "wow I'm really glad I brought my gloves. It is chilly." The kids laughed as Elizabeth said, "seriously? I'm just getting ready to take my long sleeves off." We had a good laugh.

Our house is 3 miles from the start of the trail so it seemed silly to snag a ride there so we did our first few miles on the road. As we walked along the shoulder of the road we had to shift positions for cars rather regularly. Both kids wondered aloud what was fun about this. "We will be at the trail soon," I said on more than one occasion. When we arrived at the trail, we stopped right away for a picture. 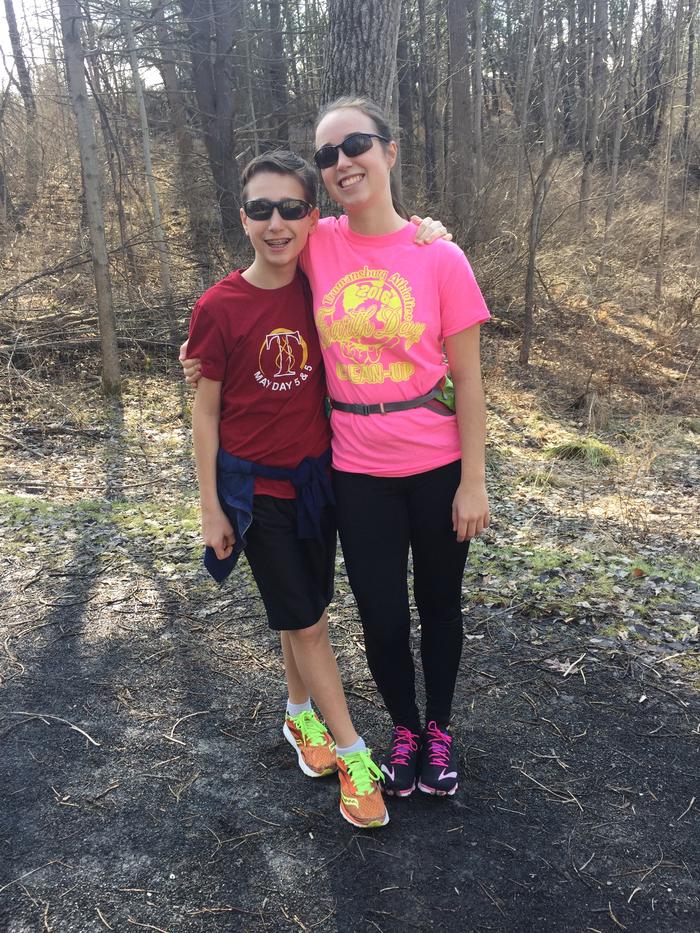 Elizabeth and Xander on the Black Diamond Trail

Apples, Trail Mix and Carrots ... but oh that Trail Mix!

"Let's start with apples," I said after we took our pictures and we hit the trail. We crunched our Granny Smiths  and talked about Xander's school play, his Running to Places theatre company play, and Elizabeth's upcoming golf season. We discussed our mid-March plan to go to Mt. Tremblant and reminisced about this year's ski season having the potential to be much like last year; an abrupt early melt followed by unusual cold for March/April. We all agreed that if the skiing was going to end so fast at least it would be good if golf season got a great start.

However, in 2016 the melt was just long enough to ruin the skiing prematurely. Then, cold came back to delay the start to golf season. Elizabeth and Xander are pretty certain that Bristol can weather this melt and we'll still be skiing locally in March. I hope so!!

After the apples, it was time for trail mix. Xander was "hungry for something substantial" and VERY excited to see that bag come out of my pack. It was here about mile 5 that he started questioning why he had signed up walk to Ithaca. Most of our hiking is done on the trails with more up and down elevation change. Today, the steady gradual slope downhill was getting rather boring even for me. As much as we wanted this to feel like an Oregon hike, it really didn't.

Soon we saw Bison. They were behind a fence and we stopped for pictures. Elizabeth runs this trail for Cross Country and she mentioned that she'd never been this far on the trail. This brought me back down memory lane. I'd trained for my first (and so far only) 50K with my friend Jenny a few years back and used this trail a lot. It wasn't officially a trail at that point. The first few miles out of Ithaca were reasonably good, filled with large railroad bed stones underneath you for footing. As you got closer to Trumansburg, it became really hard to navigate with overgrown grasses and prickers. Toward the last bit there was a spot with mud, prickers and water and old barb wire fencing along the sides. I told the kids about one 22 mile run Jenny and I had on the trail. We'd left from Ithaca and run up to Tburg, then taken the Rim trail twice and headed back to Ithaca. Scott met us on the Rim trail a couple of times with food and water. After this run that he and I had a date planned for pizza and beer at Little Venice. I was SO excited only to come home with my stomach really off. Our "date" at the restaurant turned into me watching him eat and talking my pizza home for later. The kids laughed!

"More trail mix, please Mommy???" Xander begged. "Let's have our carrots next," I said. I knew if he filled up on trail mix the carrots wouldn't get eaten. We crunched along eating our carrots and Elizabeth was on her phone texting her friend Sophie to tell her about her crazy long walk to watch a movie and get dinner. Sophie was heading to ski training and was pretty happy not to be along on our hike!

Soon Xander piped up again, "How many miles?" 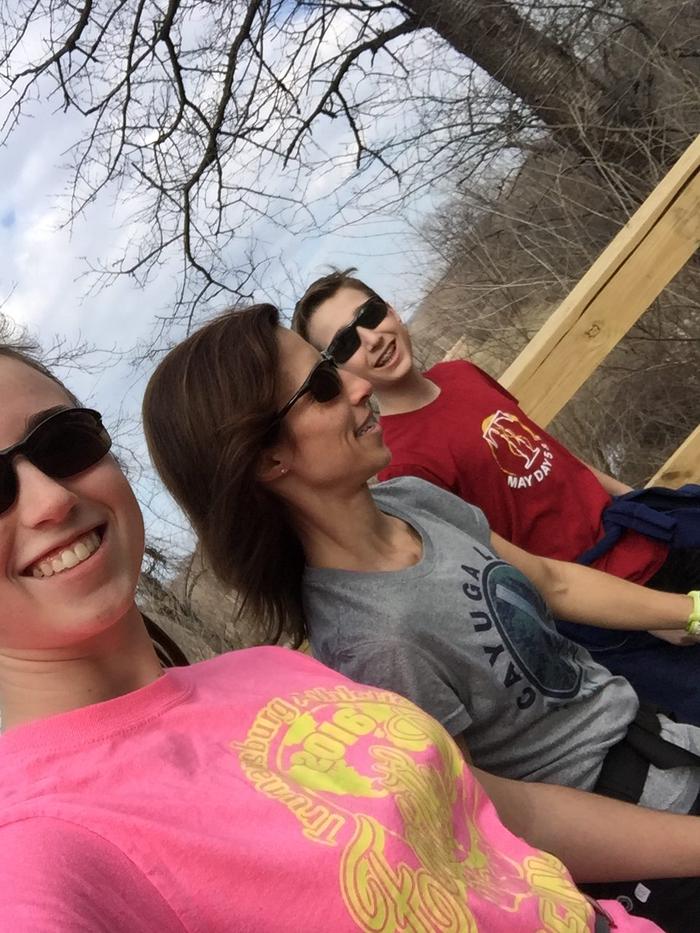 The last few miles were uneventful. As we neared Ithaca, the trail was crowded and less tree covered. Xander had finished his trail mix and knew there was no more to be had, so he stopped begging. We continued to talk about everything under the sun and soon popped out into the city of Ithaca. It is always fun to re-enter civilization after a long walk. We had the same dusty shoe feeling we get while hiking in Oregon, but we were only 12 miles from home!

We thought we had time to stop into Finger Lakes Running and Triathlon Company to look at running shoes and just say "Hi" before we went to the movie, but a quick look at the clock revealed we'd cut it too tight. About a block away from the movie, Elizabeth checked find my iPhone. Scott was at the theatre. We would head straight there, get some popcorn and get settled in for our movie. Ithaca Beer would follow!

Since our family goes to the movies about once a year and the kids fought back about this one saying, "Let's just wait until it is released! We like to watch movies at home." Since we can rarely agree on a movie, we hardly watch any at home all together either. Scott and I watched the preview and decided this would be a good family movie outing. The parents prevailed on this one! 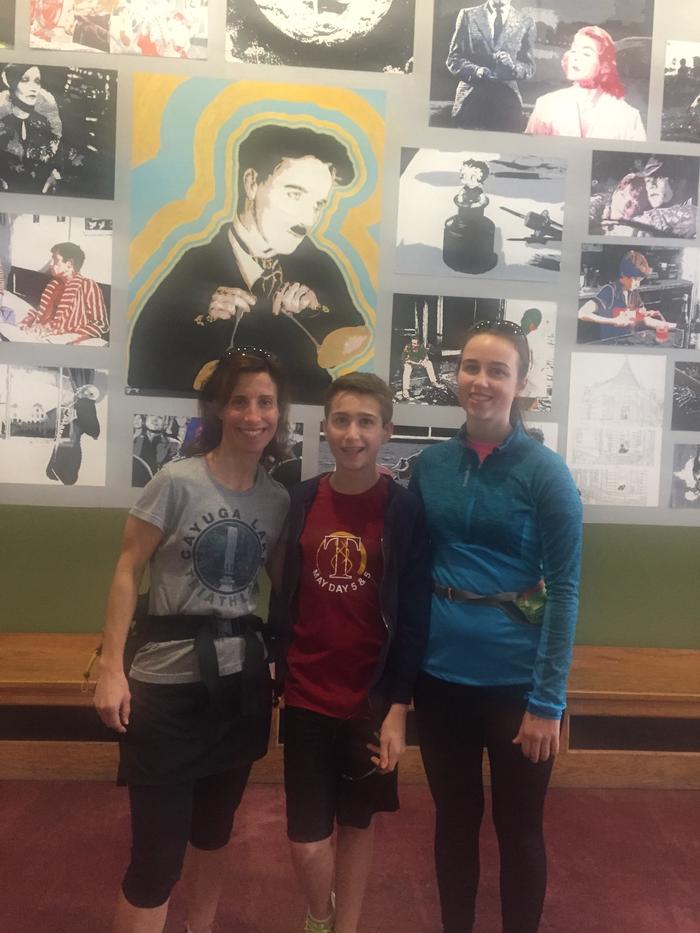 It didn't take more than a scene or two to realize why La La Land was nominated for so many awards. Amazing, amazing and amazing! We were all rapt from the first scene. It was sad, happy, thoughtful and provided dinner conversation for us that night and a love of the music that continues as I write this post more than a month later. We now own the sheet music and listen to the soundtrack all the time!

And Dinner ... At Ithaca Beer

After the movie we drove over to Ithaca Beer, hoping that the wait wasn't too long! It was Wednesday after all, but it was also February break. The wait was 45 minutes, and we decided we had to stay. It was our destination plan, and no one was really starving after the popcorn we'd all enjoyed!

We hung out near a small bar table and talked more about La La Land while sharing stories about our hike. The app the use for their wait time let us see that two parties were ahead of us. After only 5 minutes Scott refreshed the app and it said only one party was ahead of us. Just moments later, our table was ready. Wow! I think it was 7 minutes in total. It was our lucky evening!

Soon we were enjoying a delicious dinner! Even after enjoying popcorn, dinner had that amazing feel of eating when you are really hungry after a long hike.