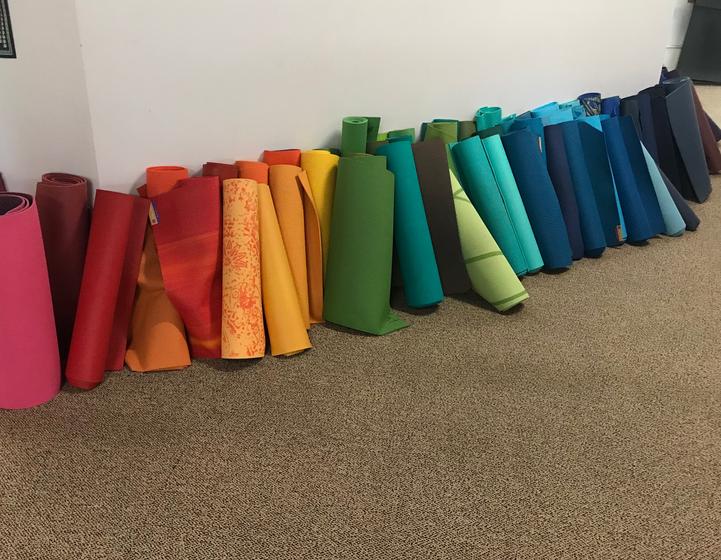 As I write this it is hard to even comprehend that it is already September 3rd. I go back to work tomorrow as the 2018-2019 kicks off for school. I'm excited! I'm ready. But, I'm also sad that summer has come to an end so quickly. As the summer draws to an abrupt end, I write this post to remember my first summer of Bikram at Pure Sweat Yoga in Ithaca.

As summer approached, Scott and I talked about the possibility of taking an early morning class regularly. I know that my friend Kathleen (who introduced this practice to me) goes in the summer so I was excited by the chance to take class with her. We'd get yoga finished before the day began, and have little impact on the family. We get up at 5 every day already so it shouldn't be that hard to be out the door at 6 for the 6:30 class.

Those who know me well know that dealing with change isn't my strong suit. Moving from our late afternoon and evening classes to a morning class proved harder for me than I thought. I can do Les Mills BodyPump at 6 am or 8 pm and it pretty much doesn't matter. But I think Bikram requires a certain mental readiness that isn't needed for the other things I do.

The first summer class it was warm and rainy. I was tired and had a small coffee before we dragged ourselves into the room. There were only 5 of us. We decided to give the front row a try (because with 5 people there was no need for a back row). It was SO hard and my biggest problem was being that close to a mirror!! I am definitely not "front row ready" yet!

I realized at that morning class that I wasn't as flexible at that hour and since I'm so inflexible already, I feel like I need all the help I can get! If later in the day is better for my flexibility then I decided I was going to stick with that.

We stopped to get our Gimme! coffee and our almond croissant and lamented that it was too bad that we'd never be going back to a morning class. If only we were more flexible. If only we had more energy ... if only.

The next week Scott couldn't go for some reason I don't remember, so I went to an evening class alone, and then the following week we found ourselves totally solo in the house. Both kids had camp and we realized that maybe we should give that morning slot another chance.

This time it was a lovely sunrise for what looked like it was going to be a beautiful day. I had learned from my first morning class to skip the pre-class coffee because it had made me feel shaky during class, and there were a few more people here. I happily assumed my typical 2nd row position.

Denise was our instructor that morning. She had a way of making you feel like everything in the world was possible - not just for that moment but for the entire day. I felt more flexible than I had on the rainy morning, and I left feeling exhilarated. She most certainly pulled out the best in me, leaving me ready to face anything!

Scott and I sauntered across the street with our sopping wet hair and sweaty limbs and stood in line for our special morning treat. I got my usual cold-brewed coffee with oat milk and an almond croissant and Scott tried a fun coffee flavor and joined me in selecting a croissant. We drove home chatting about our amazing class and vowed to make it a weekly thing.

And mostly we did

We settled into a pattern of Wednesday mornings with Denise pretty much all summer. On Scott's birthday it was also our friend and fellow classmate Laurel's birthday the next day. In honor of the birthdays Denise had us do 2 extra camel poses. Camel comes pretty far into the Bikram series, and sometimes I struggle to get through the 2 we already do. I laughed when she suggested 4 thinking she was kidding.  She wasn't. However, the energy in the room was so fun and positive that I gave them a go. I actually made it through 4 of them!!

Our 20th anniversary also fell on a Wednesday, and we mentioned it when we walked in. Denise asked us for some advice on how to make it 20 years. Scott said something semi elegant sounding and I know I said something most truly lame, but I answered her question the best way I could at 6:30 am, feeling a little embarrassed by my reply. I didn't think much more of it at all and then the end of class came. Denise closed class with a beautiful paragraph about love and commitment and marriage. She took our totally raw sounding words and weaved them into a beautiful poetic sounding meditation for us all to end by. I left feeling stronger, inspired and ready to face the world again. And then trotted across the street to Gimme! to wrap up my perfect early morning time.

Vacation and the end of summer

"Maybe we can find a Bikram studio on vacation," Scott said as we got ready to head out to Oregon for 2 weeks. "I'm sure we could" I said. The last time we went to Oregon we had sought out a Les Mills gym and it was fun, but this time I really didn't want to bring anything from our normal life with us. I just wanted to hike and explore and have no class commitments. He smiled and said he understood. So we took two weeks fully off from Bikram. I realized I hadn't done that since starting in March. I have even remarked many times that it is something I absolutely have to do once a week because it is so hard I don't want that starting over feeling!

We had a delightful vacation, but by the time we returned home we had missed almost 3 weeks of class because we had skipped due to the CLT the week prior to our leaving. The summer was almost over and this would be our last morning class with Denise. We relished every second of the 90 minute stretching, and went to enjoy our coffee afterwards. On the way home we remarked about how amazing it was that a time slot we had just started in late June had become so important to us. Scott could technically choose morning classes with his flexible work schedule, but I have to switch back to evenings and/or weekends. 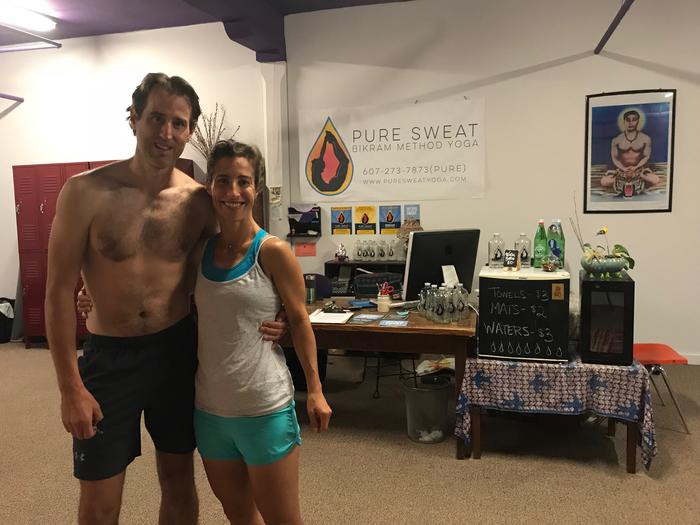 Before our last summer morning class.

As we went to order our last post Bikram Gimme! coffee we struck up a conversation with our Barista. He looked at us and said a little timidly, "Did you run here?" We looked down at ourselves and laughed, "oh we just came from Bikram across the street." He smiled and asked how many people had been in class, how our class was etc. We asked if he'd ever been and he said he had, but should get there more often.

30 minutes later I was hosting a wedding cake tasting in my bakery kitchen and I was sharing about our morning (because I hadn't had time to make myself look truly presentable after class and was still enjoying my coffee). The bride to be shared that she worked for Gimme! and asked me if the owner was there after mentioning one of the baristas by name. I said I wasn't sure but then described my conversation at our checkout. "Oh yes that is Kevin" she said. "He's very gregarious and gets into great conversations with the patrons." It was a cool interaction - small world. And I was rather thrilled that on our last day of morning class we got to chat with the owner of Gimme! 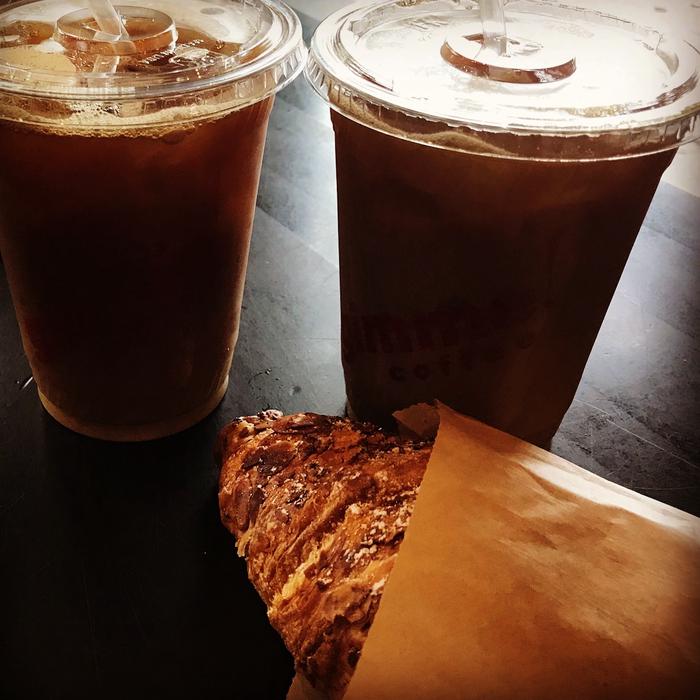 And the times they are a changin'

In anticipation of fall schedules, we went to the Sunday afternoon class yesterday. It is a class we frequented before switching to morning and it is our plan for fall. We have this new family thing where each member of the family is in charge of one dinner for the week, and Sunday is Xander's day. Elizabeth bakes for my bakery, Emoticakes and Xander has the afternoon to prep his meal (we had to give Xander a weekend day because he always selects challenging meals with a lot of prep). Because of the kids' schedules, this time slot is PERFECT. We go to yoga and arrive home to dinner being ready.

Because it is the last week of summer and we're smushing everything we can into the day, I had hiked with Elizabeth and then gone swimming at Island prior to the class. Our hike wasn't terribly strenuous. I hurt my foot a week ago while running and am only just starting to feel better (though this hike made me think I may need to see a doctor). My swim was WONDERFUL. I haven't been able to run for a week, so biking and swimming have been an amazing gift to have as options while my foot is hurt. I swam a mile and then lounged in the hot tub for a bit before going to Bikram.

And I've never gone to Bikram after doing another workout. I thought it would be a perfect post-swim thing. I realized about 5 minutes in that it was most certainly NOT a good post-swim plan. I was so water logged that I started sweating instantly. I had to lay down during a few poses early in the sequence and after about 40 minutes I actually had to leave class. I have never left class before. I was just so hot and so tired from my prior activities. My only desire was to cool off enough to survive the floor portion of class. I sat outside the studio for what felt like forever, and then re-entered the room just as they were switching to the floor portion.

Our class had a guest instructor for the afternoon and we were lucky to have 3 of the regular instructors in our class; Denise, Beth, and studio owner Lilly. It was fun to watch their flexibility (yes we're supposed to be looking at ourselves, but I'm still working on that bit) and I couldn't help but feel some pangs of jealousy as I looked at Denise doing a most perfect bow pose while I laid there looking like a beached whale.

...And the 2nd half of class went fine. I was cooler from my rest, and had probably already sweated out most of the water I dragged in with me from the pool. I had never left class before, but it was the right choice for today. It allowed me to feel ok for the 2nd portion and give it my full effort.

After class, as we drove we remarked that it was hard to switch from morning to afternoon. I felt more tired from the day and less able to handle the work of the class. I know that will change as abruptly as the seasons. I laugh as I write this because I know soon I'll again wonder how I ever managed the 6:30 am class and switch back into my late afternoon or evening time. I also have blissful summer mornings to look forward to next year.

We arrived home to Xander finishing his 3 course meal for us. Tomato salad, homemade gnocchi and homemade tomato sauce and homemade tiramisu. He'd made his tiramisu the day prior, but had spent the last 4 hours preparing this meal. Elizabeth had folded the MOUNTAIN of laundry we had laying on the bed. We laughed and talked over dinner and took the rabbit for a walk around our loop. It's been a truly magnificent summer!