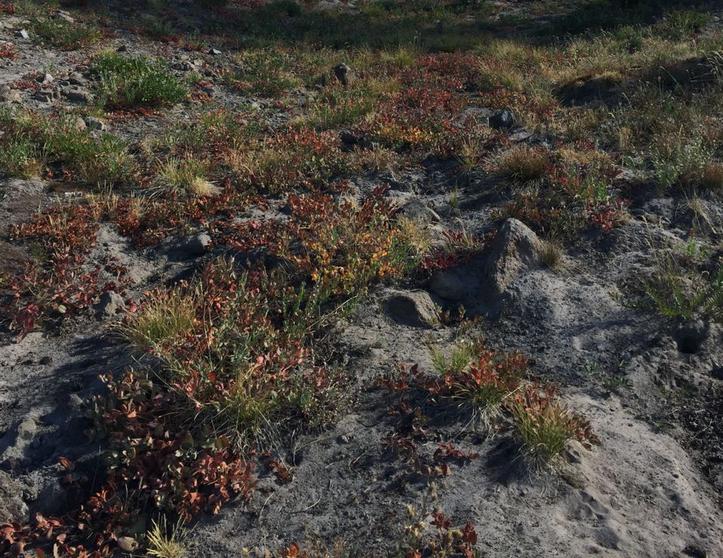 Before dawn on our 2nd day of vacation we packed all of our stuff to begin the drive out to Mt. Hood Summer Ski Camp to drop the kids off for the week. This year the schedule was compressed because the mountain was closing early due to lack of snow. We were bringing Elizabeth and Xander in time for breakfast on Friday where they would grab some food with the other campers, pack their lunches and head up to the mountain.

As we left the hotel, Scott and I decided we'd hit McDonalds and buy an egg sandwich for ourselves as we began the drive. We almost never eat fast food and Xander had a tremor of terror in his voice as he timidly asked, "We don't have to eat there do we?" We laughed that our 11 year old was so anti fast food, and assured him he'd be dining at camp.

About 20 minutes into the drive Scott said, "can you check the GPS? I think it is heading to Hood River." We'd been to Hood River on our way home from St. Helen's yesterday and sure enough we were heading right back! No problem, we re-routed but didn't check the bigger picture map. It routed us on back windy mountain roads for almost 45 minutes. By the time we realized our error we were too far into the process to correct this. We were glad that neither kid had eaten as both are prone to car sickness. Soon, we hit the last town and were back on straight roads for the last 1/3 of the drive to camp. Arrival was smooth and before long the kids were heading up the mountain and we were off on our own adventure!

We chose a hike near Mt. Hood so we could see the kids as they started their day, and because we had plans to see my sister and stay the night at her place in Portland. In 2012 we hiked the Timberline Trail down to Zigzag Canyon with Xander on Elizabeth's first day of camp so it was cool to be back on familiar terrain a few years later. Arriving just as they were heading up, we nabbed a quick picture of them before our hike. 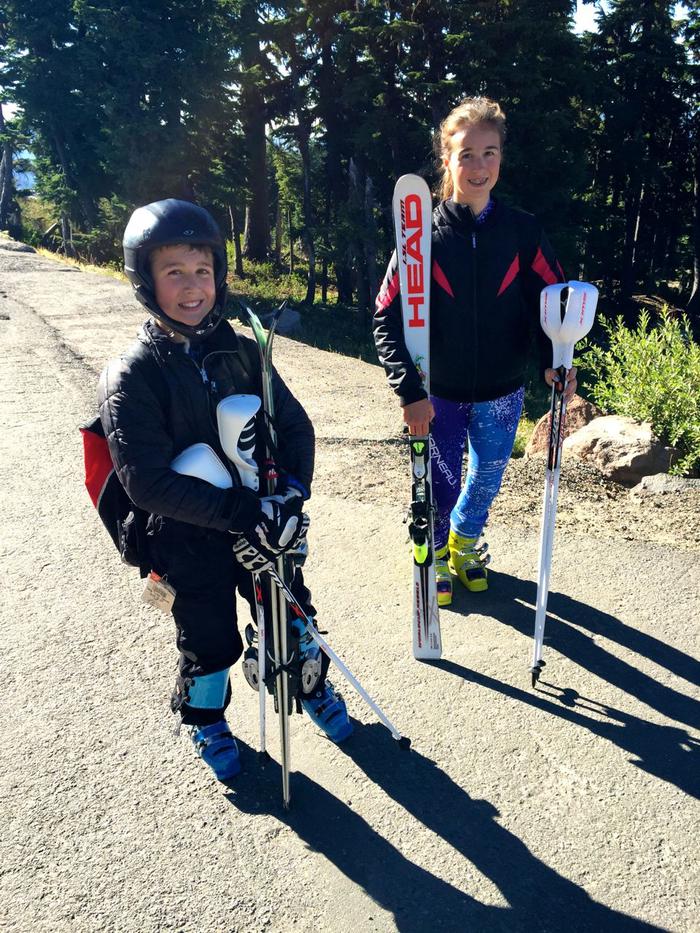 Soon it was time to head out. The hike begins on the PCT and heads down to little Zigzag river. The trail was dry and dusty and almost sandy feeling. Our feet sunk into the sand and it felt a lot like walking on beach sand. We passed many hikers, including several overnight campers and a couple of PCT thu hikers. Before we began the 700 ft descent into Zigzag canyon we took this shot of Mt. Hood. 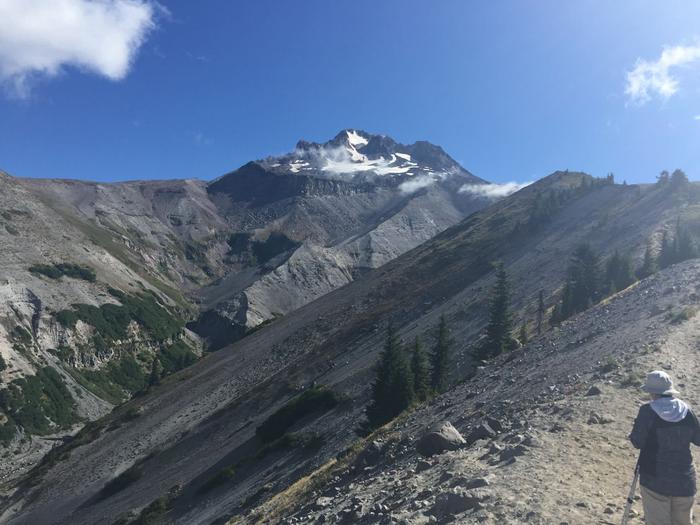 Hood before we started our descent into ZigZag Canyon

As we began the series of switchbacks down to the Zigzag river I thought about how different it is to hike without a young child. When we last hiked here with Xander he was 8. He was a great little hiker, but every switchback we went down I worried about our trip back up! Today I just ambled along with no worries. When we reached Zigzag river we enjoyed a snack and the scenery before making the quick river crossing. It was so easy to hop from rock to rock and head up the other side.

Shortly after the river crossing, we made a right turn to head toward Paradise Park. On this trail, we enjoyed switchbacks toward dramatic views of Mt. Hood. We made steady progress on the climbs, grateful for some shading from trees on this really warm day. We made it to a meadow and tried to decide what to do. We could finish the loop for a 12.2 mile day, or take a short connector trail and cut it short, making it about 10.6 miles. It was almost 11 am and we were only about 5 miles in, so we opted for the connector so we'd have time to enjoy lunch at The Taco Shoppe, our favorite place in Govy. After that we'd head back to Portland and enjoy the afternoon/evening with my sister and her partner, Adam, finishing off the day with her 40th birthday party!

We'd decided to choose the shorter distance, but still I felt bummed that we would barely be in double digits (I try to be chill on these hikes, but have trouble doing anything but "chasing miles" when I'm out in Oregon). Our hike back was really delightful. We passed by many hikers, saw some trail runners and enjoyed the beautiful scenery. One thing that I love about out and back hikes is the new perspective you get on the return trip. I always find that because I know exactly what to expect, I'm more open to looking around and taking in the scenery, and usually more relaxed. We also saw the actual start of the Little Zigzag river!! This is a glacial stream that sometimes doesn't start until afternoon when the glacial melt reaches the lower elevations. See the picture on Scott's post.

Before long we were back at Timberline. We knew it was about the time of day that the kids would be heading back to camp. By early afternoon, the snow on the Palmer Snowfield is too warm to train on, so they head back to camp and enjoy great afternoon activities like cliff jumping and white water rafting. We saw some kids in the distance and I said, "there are ski racers down there." Scott took one look and said, "those are OUR kids!" We ran down to see them before they boarded their bus. It was SO warm that Xander was sopping wet with sweat. I was suddenly REALLY happy that we'd chosen the shorter distance for this hike! 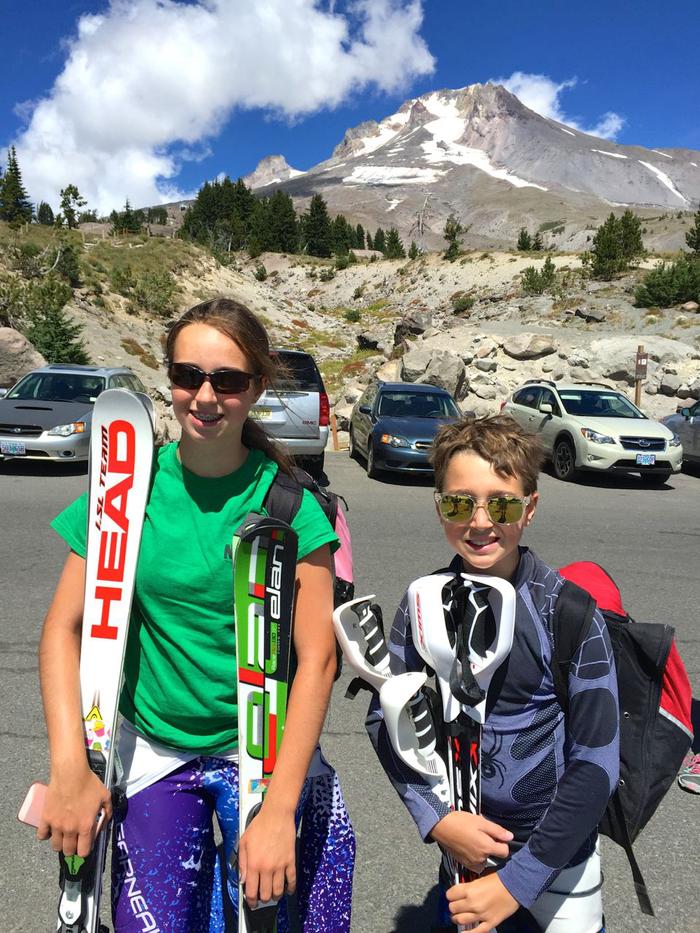 Ski campers after a full day

Our stats for this hike are 10.6 miles with 2316 feet of gain. We were hiking for 3:28:21. We used Gaia GPS to track everything loaded it into Strava for the GPX report.