Our family has a mostly annual tradition of going to visit my sister Sarah in Portland in the summer. While we are there, Elizabeth has attended Mt. Hood Summer Ski camp for two of the years and this year would be the first year that Xander was ready to attend. We arrived on Thursday August 6th around midnight Pacific time after a LONG day of travel. Ordinarily, our first day would be a day of acclimating. However, the kids' camp had been moved up 2 days due to low snow (they'd be attending camp on the actual last days the mountain would be open for the season), so in order to have a hiking day before camp we had to seize the day!!

We'd tried to get St. Helen's rim permits on a permit swap site (all the permits were sold so the only option was to buy from someone who couldn't use theirs) and we were unsuccessful. We've been to the Johnston Ridge Observatory several times over the years, so we picked what we thought would be a shorter drive for a hike that would be beautiful and not too long (for their first hike of the trip the kids were game for a hike that was less than 10 miles so we obliged).

The guidebook explained that we'd need to take Interstate 5 to exit 21 (North of Portland 25 miles). Then it explained the long drive to Cougar, Washington as we'd head toward Windy Ridge. We didn't read that part carefully, only figuring that if we were getting off I-5 SO much earlier than if we went to Johnston Ridge that this drive would be shorter than our normal outing.

2 hours later we were on the last stretch of winding roads up to the parking area when Elizabeth woke up from her nap completely disoriented (we were in a rental Mercedes SUV with only our hiking poles and lunch) and promptly said she felt like she was going to throw up. Luckily there was a pull off a few minutes away and we made it just in time. We couldn't help wondering what we'd have done if we hadn't. A rental car with no clean-up supplies at least an hour from civilization would have been a tough ride! Onward and upward and soon we were at the parking area. As soon as we popped out of the car we noticed that Xander had his Keen sandals on. Thankfully he wasn't in flip flops. He's 11 and Elizabeth is 14 so we have stopped parenting "as though we have little kids" thinking that they can predict what they'll need based on the situation. All I could hope was that his feet wouldn't get irritated and he wouldn't end up starting the trip with blisters.

As we headed out on the 8.8 mile hike that begins on a dusty gravel road, Elizabeth and I couldn't help but joke that we really didn't need our poles. It was fun to walk side by side and chat on the mostly flat terrain, but we were eager for it to change to trail. As we hiked, we came upon an odd looking little building. It turns out that it is an EarthScope. It is part of a network of 103 stations across the west to study deformation of the Earth's crust. The data is used to better understand earthquakes and volcanoes. Elizabeth had just finished taking Earth Science this year and we spent some time reading about this and taking pictures. 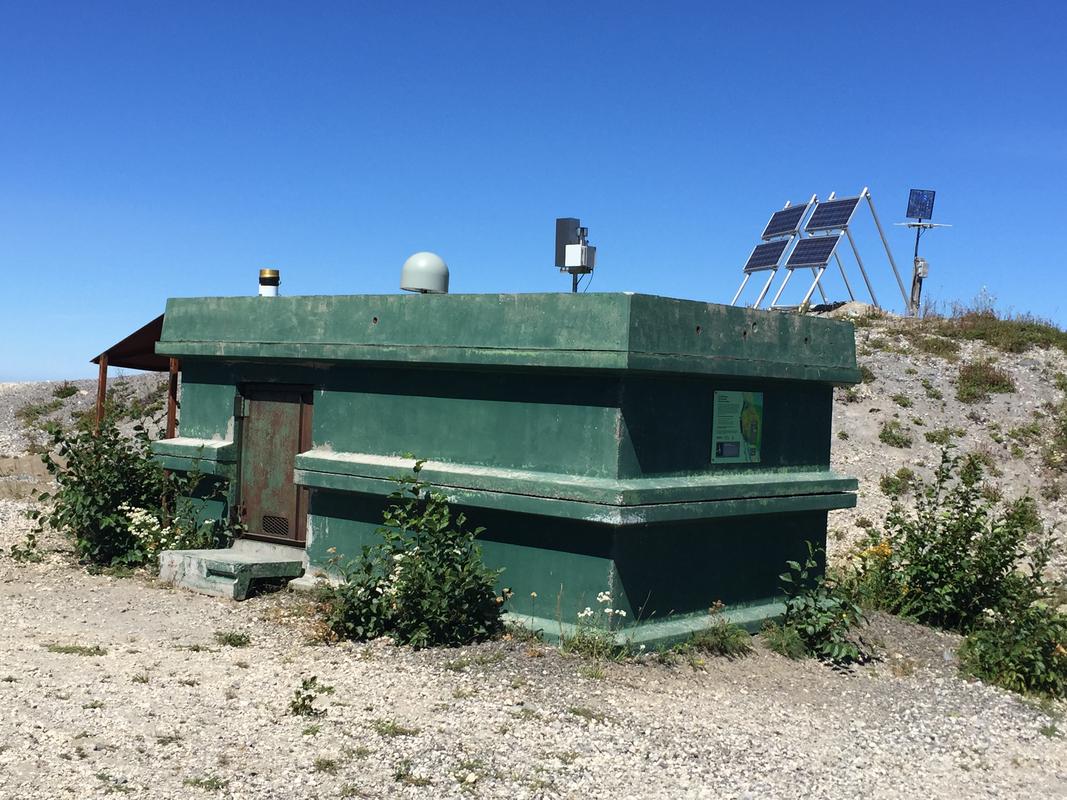 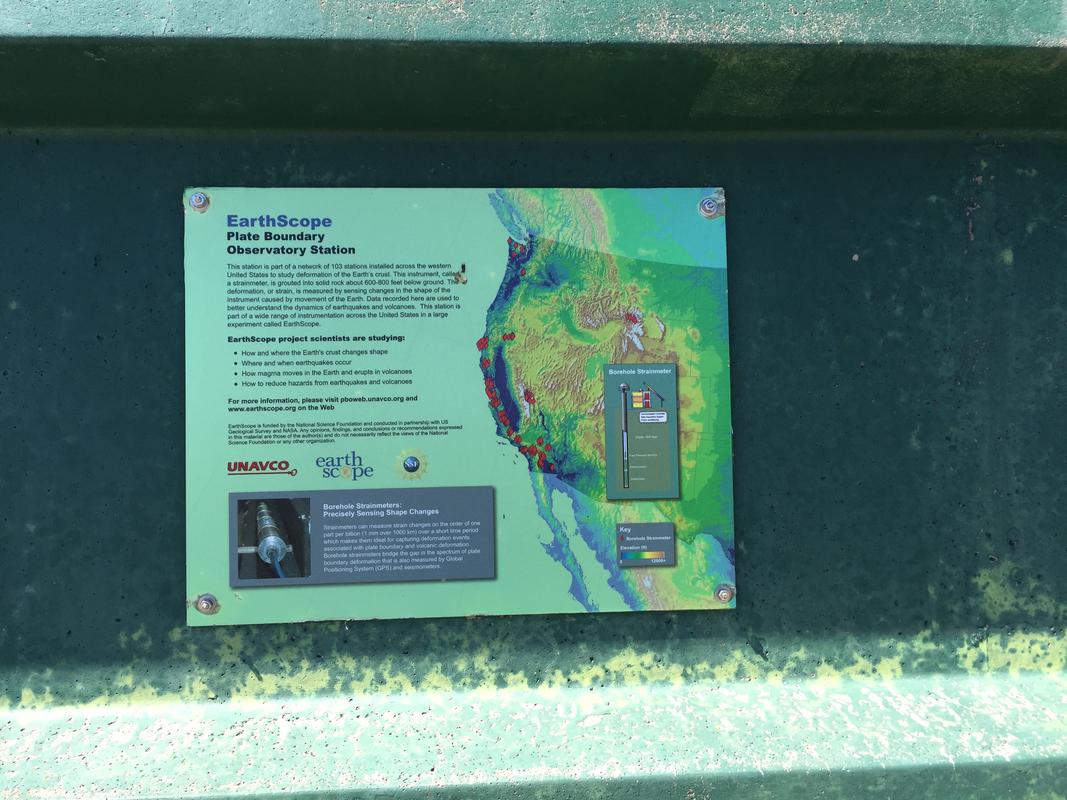 As the road turned to trail we ran into a couple of women who were clearly setting up an Aid Station for an ultra. We chatted and learned that the Big Foot 200 runners would be coming through soon. It was early in the race; mile 19 or 29 of 200. We'd get to see runners!! We continued along the trail and I have to be honest; at this point I wasn't really enjoying the hike. The kids were whining, I was worried about Xander's feet and my own feet were rubbing with the dry dusty surface. Lamenting that we hadn't gone to the visitor's center, I continued to slog along. Soon we arrived at an area with enough steepness to make the kids a little nervous going up. This is when everyone started to be a little more cheery. Once we get off the easy terrain, our family always perks up. 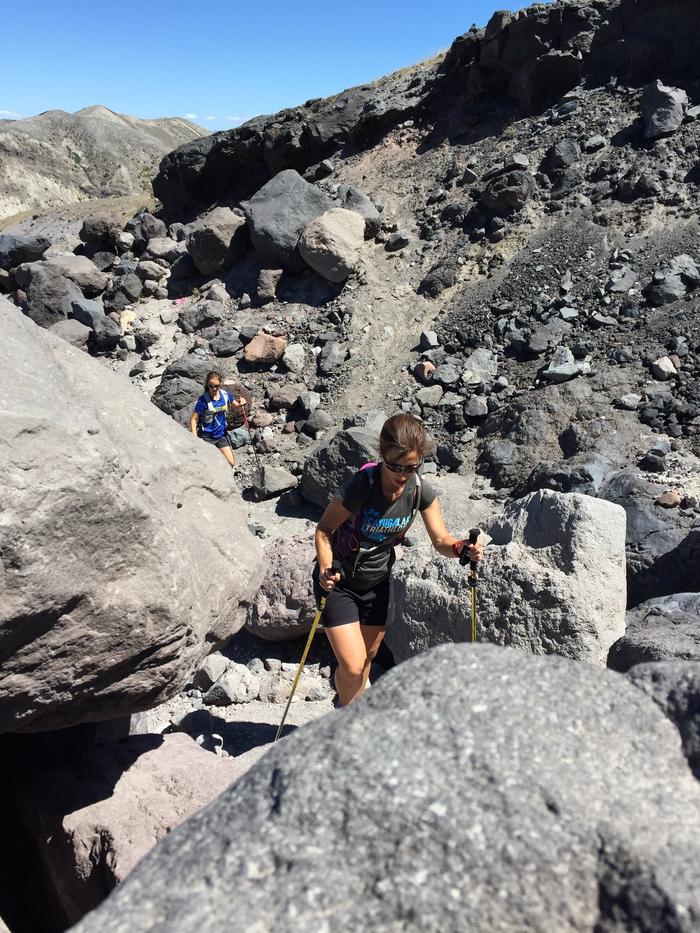 I kept looking up at the crater, grumpy that we couldn't be doing a big, challenging hike and soon we arrived at what we thought was our river crossing. The landscape was lush and green in the middle of the otherwise dry, dusty, lunar inspired surface. Scott told us to hang back and he headed in only to come out quickly and point us uphill. We could either walk through the river or head uphill where we'd cross with our feet dry. We opted for the dry feet through this little oasis. 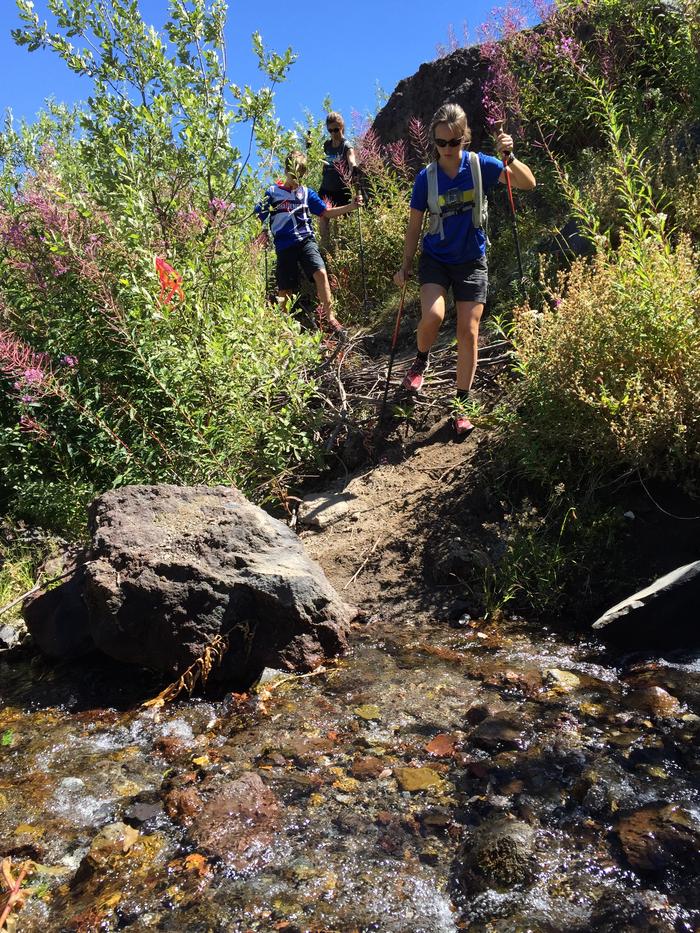 Our hike continued along as we debated whether to go to the falls or turn back. Xander was worried that with the dry year that there would be no falls. Scott and I wanted to keep going. Being a bit of a long hike freak, I wasn't going to be happy if we'd driven 2 1/2 hours for a 6 or 7 mile hike. As it was, 8.8 felt short enough! Our effort paid off and soon we were treated to the gorgeous waterfall. It reminded us a lot of Taughannock Falls in our hometown, minus the greenery. 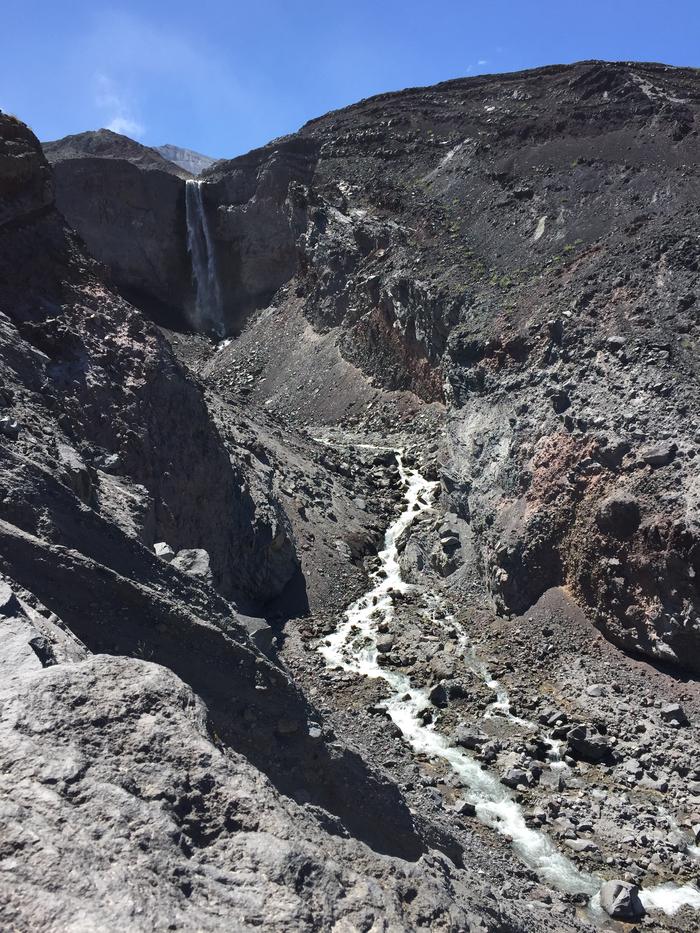 After we saw the falls and had lunch, the kids had great energy! Suddenly eager to show us that they could beat us back to the car, they were fast hikers indeed. Scott and I kept our steady pace and talked about the landscape and wondered aloud if we'd see Bigfoot 200 racers. Soon, we saw the first racer in the distance followed by another shortly after that. Having watched my sister in Western States we knew what goes into an event like this. These guys were the front runners and it was fun to see them run by us. We saw one directional race sign that was flapping in the wind and thought, "yikes that could be a confusing turn" but we didn't have anything to pin it down with. Soon we approached the fork that could take us on a longer hike (I voted for longer and lost) or take us back toward the car. As we approached the fork we saw a person hurriedly scrambling down a big hill. He had a camera and he was telling a guy that he was going the wrong way. Turns out he was an official race photographer, a seasoned ultra runner himself and the guy he saw wasn't supposed to be coming from that direction. He joined us as we headed back toward the Aid Station.

Upon arriving at the station, we chatted with the now larger group of workers about the terrain and the race. We shared that one sign was flapping a bit and that this could be the reason the person was approaching from the wrong direction. One woman had a Western States shirt on and she looked a little bit familiar. I figured the odds were that I didn't know her and didn't say anything. Luckily Scott was more daring, quickly asking her if she'd run the race. She started to explain that she'd crewed for a friend 2 years ago and we shared that we'd been out to watch my sister 2 years ago. Turns out she is Janet; part of my sister's crew from the race. We'd spent the weekend with her during the event and had a great time! We'd even been with her when she bought the shirt!! Small world. The race photographer listened to us catching up and he snapped a picture. We made it into the official Big Foot 200 photographs. This photo is just the 3 of us, but to see the official race one visit Scott's post. 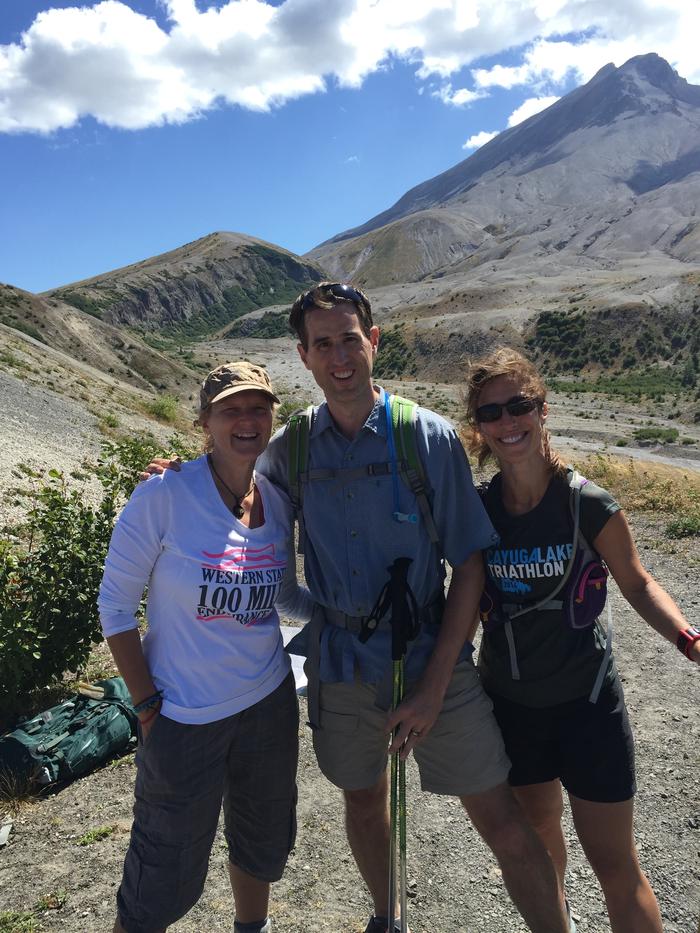 With Janet at the Big Foot 200

We headed into our car and took a different route home by way of Hood River. We enjoyed a delicious dinner at Double Mountain Brewery before heading back to our hotel in Gresham.