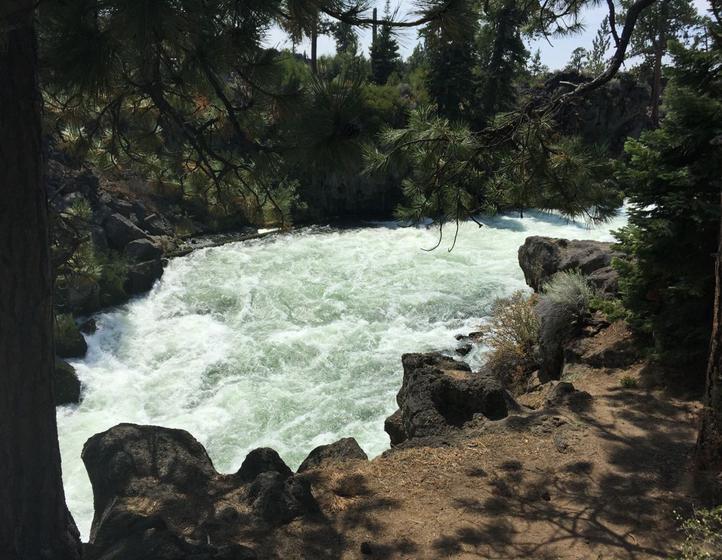 Scott and I woke bright and early for our solo day of hiking. Our vacation came right in the middle of training for the Corning Wineglass marathon, and I'd put on my training plan "catch as catch can" for any type of running. I knew we'd spend most of our time hiking, but still it would be good to have at least a couple of runs during our 10 day stint in the beautiful Pacific Northwest.

Scott wanted to run the 9 miles on the Deschutes River trail up to Dillon Falls. I wanted to hike the 9 mile trail to Green Lakes via Fall Creak. They are both in the same general area so we decided to make a day of it and do both.

We headed out early that morning to shop in the Old Mill area in Bend, and then drove out to the trail head just outside of Bend. We'd enjoyed take out pizza from Martolli's pizza shop in Sisters the night before, so naturally we packed our leftovers for lunch. We had a slice of pizza and some fruit on the drive before the run. We've hiked this trail a couple of times and always enjoy it. It is a nice gentle grade with only 300 feet of elevation gain over the 9 plus mile distance. It hugs the river and passes by the famous Big Eddy rapids that we enjoyed rafting through the last time we were in Oregon.

Soon we were off. Scott and I don't run the same pace - not even close! I told him to go ahead of me and just wait up every now and then instead of changing his stride to stay with me. This was going great until we hit an area where there was some question about which way to go. He waited for me and I kept going. As I kept running along I thought, "gosh I guess he's really far ahead of me" followed by "hmmm, I hope he is ok." Soon my phone rang as he checked in. He quickly caught me and we continued on our way. 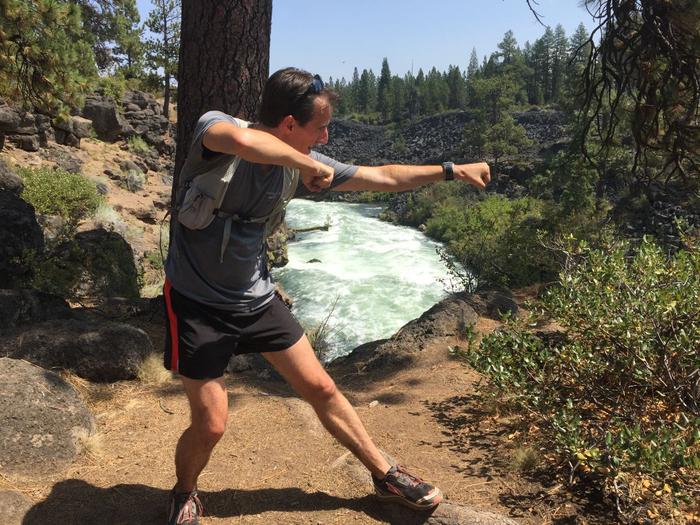 This run could have been pleasant if I'd been in the right frame of mind. I was afraid of running with him and holding him back and it was 90 degrees and dry and dusty. I was crabby and even the slightest elevation change made me want to stop to walk. I plugged on to the 4.6 mile turnaround when we reached Dillon Falls. We enjoyed some trail mix and took some silly posed pictures near the falls. 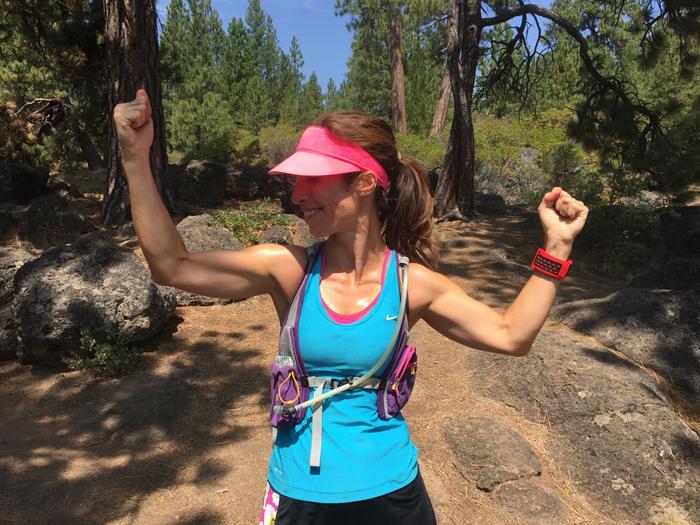 Skinned Knee and Banged Up Elbow

As I hit mile 5.6, I remember thinking, "I'm getting there" and "I just need to keep plugging along". I glanced at my watch, worried that the battery was near death. Even though I wasn't running very fast, I was still looking forward to my stats for the run. The next thing I knew I fell face first onto the hard, dusty ground. My knee was gashed open and my elbow was all bloody. I burst into tears and laid there until Scott ran back. He tried to comfort me by saying, "It's ok, we don't have to hike Green Lakes. We can just head back after this." I responded by wailing, "but Green Lakes is what I was looking forward to!"

Scott did a nice job cleaning up my cuts and I slogged through the remainder of the run with my skinned knee and banged up elbow. Soon it was time to head to Green Lakes.

The West is in major drought, and out in the East we'd been having very humid and pretty rainy weather. Of course, as soon as we arrived, thunder and rain showed up in the forecast. We joked that we'd brought it! The area desperately needed the rain, but the thunder was not so welcome. With thunder and lightning comes the risk of new forest fires. Today the chance picked up after 3 pm. We started our hike around this time. As we left the parking lot, South Sister was entirely shrouded in clouds. There was rain looming and every now and then we'd get a small shower. We weren't going to let any rain dampen our moods though! This is my very favorite trail and I was excited to be on it. We walked along the beautiful mountain stream and enjoyed chatting together. It felt nice to be hiking, even though our pace was on the slow side after the run. 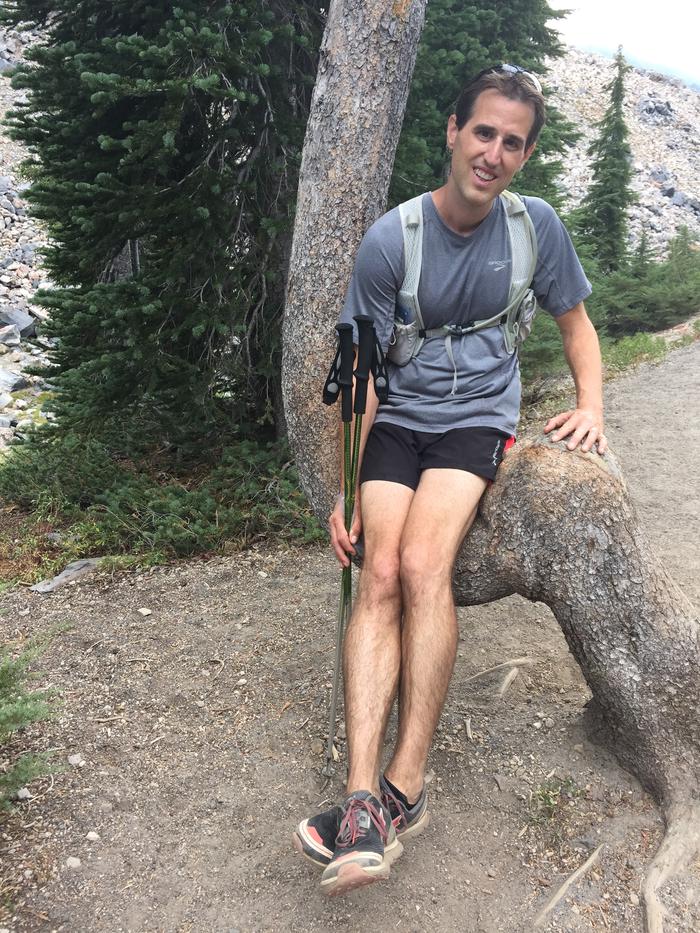 Scott in our favorite tree

This is a very popular trail even on a weekday afternoon. We passed several big groups of hikers heading out from a day of hiking. Soon, we arrived at our favorite tree. We've been taking pictures of the kids on this tree every year since they were little kids. I felt a pang of sadness that they were not with us to see their tree. Scott and I dutifully posed in their spots for our own pictures. 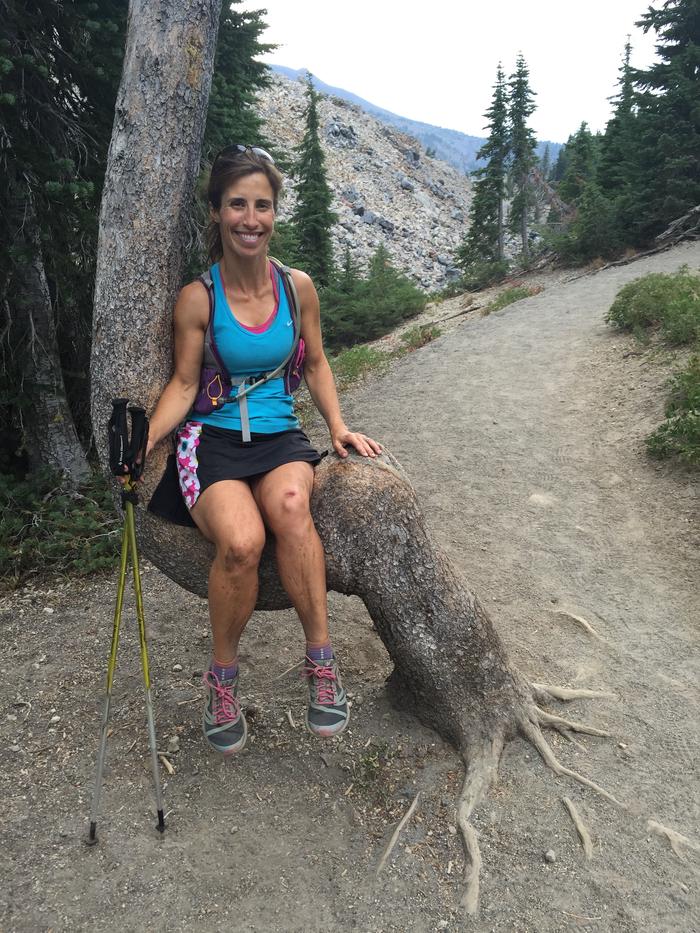 Me in our favorite tree

As we crested the final hill, Scott became somber. We sat looking over at one of the Green Lakes and the lovely Broken Top mountain and he admitted that his IT band was killing him. The running mixed with the hiking and the fact that he hadn't been doing his physical therapy exercises while on vacation had conspired to make his leg feel really tight.

There are two ways down from this area and I had planned to suggest taking the other route back to our car. If we took that way, we'd have a 20+ mile day. It was hard for me not to chase miles, but I knew it was prudent to return the way we'd walked in. We've been on the other trail several times before, and it is enough longer that it would add undue stress to his already exhausted leg. We began our slow descent to the parking area. 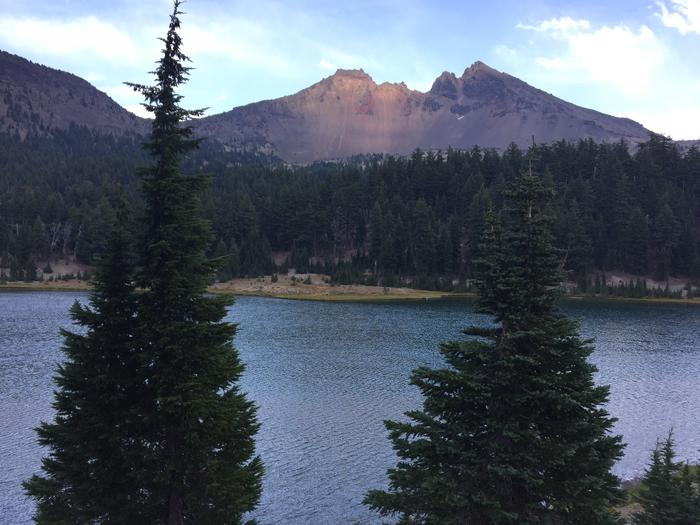 As we walked, we took several pictures of the beautiful area. We've never been up here without a goal of a summit. We'd just hiked up with water and basic supplies on our backs ready to enjoy a few views before heading down. It felt a little odd to be heading back instead of setting up camp and planning the next day's summit attempt. 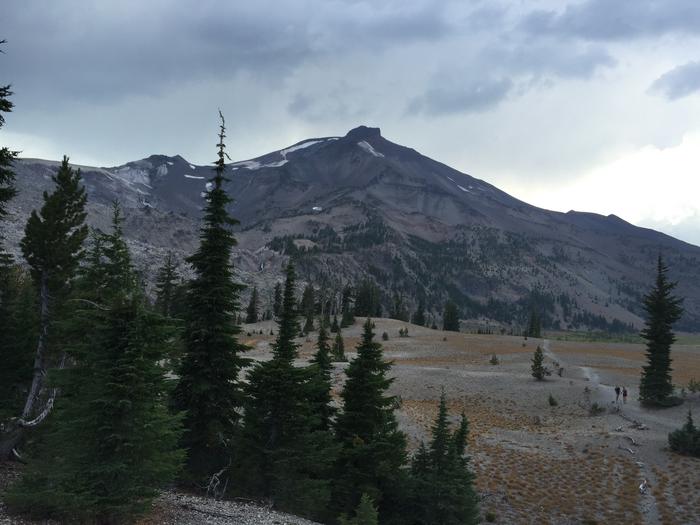 South Sister, so close to Broken Top yet totally covered with clouds while Broken Top was clear.

When we reached the parking area, we met a man out hiking the entire PCT. He had met up with a couple and the three of them were heading up to summit South Sister and take in the meteor shower that was lighting up the sky that evening. We had a lovely conversation with this very pleasant PCT thru hiker. He'd lost a gaiter, and we started talking about Altra shoes (he was in his 5th or 6th pair since he'd started the trail and he commented on Scott's Altras).

After our conversation, we headed home to Sisters where we enjoyed a delicious homemade pasta dish with green beans and tomatoes. One of the best things about staying in a rental is being able to have a nice dinner in a lovely space. Despite our dual injuries, we had a fabulous day!!

There are 12 other posts like this one. Here are some other recent ones: