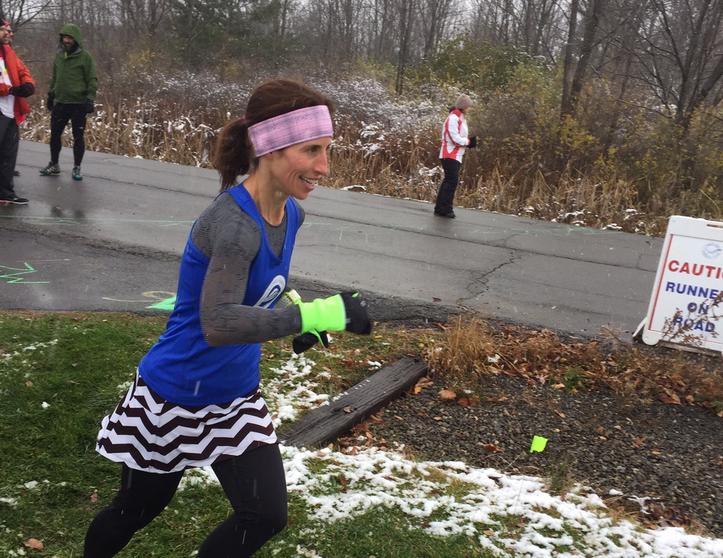 After two days of 70 degree weather, our forecast called for 30s and lake effect snow with accumulation. Not feeling especially motivated, I emailed Brenda to see what weather conditions would make her bail. She said she was in no matter what the weather! Scott had signed up to try out the last race of the series as well, so really who I was I kidding - we were going to be going to the race no matter what the weather.

As we prepared to walk out the door that morning we were carrying a large cake for my business, Emoticakes, loading it into the car. Elizabeth said, "mom what is your goal for today?" I replied, "to get there!" in a grumbly tone. In truth, my goal was to run all the way up vomit hill and continue to run up the wall. The time that we ran the course a few weeks ago, I walked entirely when I hit the wall and took a few walking steps on the hill. After the cake delivery went more efficiently than planned I pointed out to Scott that we were going to be early and suggested stopping for coffee to kill time. He laughed and continued driving.

In truth, the weather wasn't really bad at all. It was cold and windy but the snow hadn't accumulated yet and it would be a fine day to run as soon as I came to terms with the fact that my feet would be sopping wet. Mostly I was grumbly because I hadn't managed to run during either of the lovely days of 70 degree weather and here I was heading out into winter running rather suddenly.

We arrived and hung out inside Moakley House up at Robert Trent Jones golf course. This was fun! I've only ever been here in the summer when Elizabeth is there for golf camp. It was cool to see it all decked out for the holidays and it was amazing that we were allowed to use this space. I don't know that I could have been quite as upbeat if we only had a tent!

Before long a group of us headed out to warm-up. I whined a bit about my socks slipping, my feet getting wet and being cold, but really it wasn't that unpleasant. People chatted about how they felt, shared stories of trips and travel. Just like with any other race, everyone brought their own worries and hopes for the day.

With about ten minutes til go time, they announced that it was time to head toward the race start. I was well dressed for running with my Brooks Run Happy thin shirt, an ear band that I won in the Steeplechase years ago and my nifty wind resistant gloves that Scott bought me last year. However, I wasn't keen on standing for 10 minutes. Brenda and I waited a couple more minutes and then strolled out there, hovering near the wall of the building until we absolutely had to go to the line.

Moments after arriving on the line the gun went off and we were running! It was unpleasant and then suddenly it wasn't. I settled comfortably into a pace rather quickly. I've been going to physical therapy for my shoulder mobility and in the first mile I sensed the difference after just 2 weeks of work. My airway felt more open, I wasn't feeling as hunched over and my breathing was easier. Though I'd been glum about not running for the prior two days, suddenly I felt rather happy because I felt more of a spring in my step than usual.

I passed several people and occasionally checked my watch. At one point prior to mile 2, my average pace had dropped to 8:23. I thought this was good knowing that the hills were at the end of the course and they'd slow me down. However, shortly after mile 2 the wind changed and the snow increased. Suddenly wind was gusting straight into my face and snow was pelting. I started to feel defeated.

As we hit an area of the course where we had to bound down a hill and then make a loop with a tight turn, I was so hungry that I was having trouble focusing on running. If someone had offered me food on the course I probably would have just walked off to eat. I started thinking intently about eating when Tonya's voice snapped me back into the race. She was so close behind me and she said something positive and encouraging. I had just over a mile to go! It was time to get my head focused.

We arrived at the downhill trail and I remembered Tonya sharing that some people would fly down the hill while others would take it more cautiously to make sure they didn't fall, and to reserve energy for the last two hills. I chose the latter and carried the energy into the final ascent. Before we headed up the hill I had an average pace of 8:32. By the time I neared the finish line, my average pace had dropped to 8:48. While rather bummed, I was very proud that I hit my goal of running the entire time up the hills. It wasn't fast, but it was running.

As I hit the final sprint in, I realized that I'd be annoyed later if someone came out of nowhere and passed me here. That gave me the energy to "sprint" in as the wind came fast and furious toward my face! I was so happy to be greeted by Scott carrying my New York City marathon poncho. I quickly joined my team in cheering! 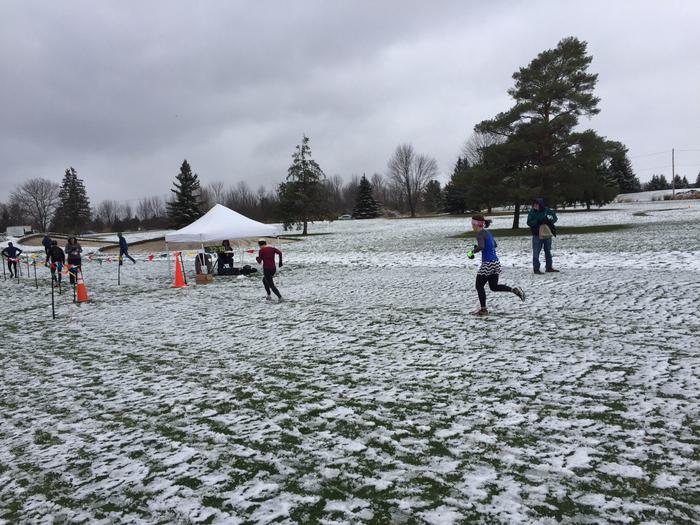 They had a lot of great food for runners - soup, salad, bread etc. Scott and I had talked about going to Viva after the race and then decided we'd probably stay for food.

Ultimately Viva won out because those cheatin' vegan nachos just sounded so tempting! We chatted a bit and then headed down the hill to enjoy.

As we sat there waiting for our nachos, we received a series of texts from the kids. They were jealous.

Cross country is a great stretch assignment. I am SO happy I signed up for this.

I look forward to next year and getting to know everyone better, training a bit better for this and keeping a positive attitude toward racing more often.

I also look forward to getting more comfortable with pacing. With Scott present, we'll be able to take pictures of our teams running next year.

This is something I love to do for my kids' cross country, so I think it will be great fun for adult cross country too.