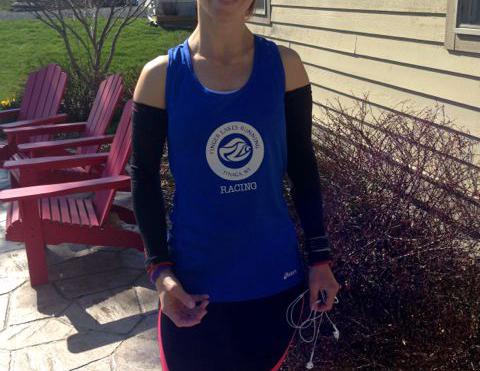 I consider myself an accidental runner. Several years into our marriage, my husband Scott and I moved to the Finger Lakes area, and we decided we should have an annual fitness goal. Our first was to bike around Cayuga Lake. I sold my old ten-speed bike and bought a mountain bike and we trained for months to work up to the distance. One August morning our parents came to watch our very young children, and we were off! Twelve hours later (we were on mountain bikes and even for those this is VERY slow!) we returned from our 100-mile journey. Our parents quickly raced out of the house leaving the kids back in our care as we flopped onto the couch!

The next year we decided to tackle the Rochester Half Marathon. We selected a training plan and decided that since we weren't runners, we should do each week twice. First we had to go out and purchase some running shoes. My sister encouraged us to get properly fitted for running shoes. Ian, of the then newly opened Finger Lakes Running and Triathlon Company, spent a great deal of time with us evaluating our stride and talking to us about different shoes. We left the store excited to embark on our running adventure! Although I ended many a run in tears and stomping, we slowly became more comfortable running. Over the 20 weeks, we became more and more fit, with our one and only 10-mile run taking place in the pouring rain. The kids and my in-laws headed up to Rochester with us for the race in September. It was forecasted to be a chilly September morning with a 7:30 a.m. start. We didn't even own long-sleeved running wear! We made a last minute outing to pick up some long sleeves and headed to the race. The family held up signs for us and watched us in several places along the way. We jogged our way through this race and were very proud of our 10-minute miles and strong finish.

The next year it was time to tackle something bigger and this was the year that I really grew as an individual. Again it was the same routine. We selected a novice Sprint Triathlon training program and began our training. I am a very weak swimmer, so I promptly signed up for swim lessons to try to improve my stroke. We followed the training plan exactly as it was written and signed up for a practice tri that had a pool swim instead of open water. You were placed in your heats by swim time, and Scott and I put in the same time for our swim so that we'd be placed together, even though he swims much more quickly than I do. The tri was great fun, but very challenging. I barely finished the swim in the time allotted and stomped and walked during the first part of the run. I spent the entire afternoon napping after the experience! But, we now knew what was ahead of us for the Cayuga Lake Triathlon come August.

For August, we decided we'd list the same swim finish time as we could be in the same heat that way. Two days before the race I discovered that they have strict rules for putting you in heats by age group and gender. Scott was on a bike ride when I learned this, and I was hysterical! I was sobbing on my bed when my 7 year-old daughter walked in and asked me what was wrong. I explained, and in doing so told her I may not be able to participate because I was too scared to swim in the lake without Daddy. I tried to talk the director into making an exception. She told me I could wear a special cap so the boaters would know to watch me closely, but I was embarrassed to do this. Ultimately I realized that I needed to be a stronger role model for my kids and I forced myself into that water, onto my bike and onto my solo run. I had also learned that I couldn't run with music, and at that time I had no experience running without Scott but figured music would push me through. I finished the race and felt proud of myself knowing that I had overcome several large obstacles.

Bringing My "A" Game

After the Cayuga Lake Triathlon everything changed! Scott and I suddenly realized we could have multiple goals each year. I learned that it was fun to run alone and I've learned more about different pace workouts and how to run with other people. Scott and I realized we could support each other, but that support didn't have to come by doing our workouts together.

Over the years we've added more and more things to our fitness docket. We've suffered injuries and come out stronger on the other end. I am truly grateful for the race director who said NO to an exception. I spoke to her later and she said it was such a difficult decision for her, but she knew I wouldn't grow as an athlete if she made the exception. I thank her for that decision. Today, both Scott and I are ambassadors for our local running store, Finger Lakes Running and Triathlon Company, the same store that got us outfitted in our first pairs of running shoes for the Rochester Half Marathon!

I have to thank my sister for helping me to become a better runner over the years. Scott and I have enjoyed improving our running as she improves hers. I enjoy reading her ultra-running blog and occasionally having the opportunity to support her, most recently at the Western States 100. I also have to thank Lisa Holt and Ian Golden of Finger Lakes Running and Triathlon Company and my husband, Scott to thank for encouraging me to get my blog up and running. It is something that I've been working on for awhile, but the ambassador program that Lisa and Ian offered helped us move forward!

I hope that you enjoy reading my blog. At this time I have 2013/14 race reports and a few other things. I'm slowly working backwards and soon will have race reports for these first outings that I mention here.

Whatever your goals are, remember that each tiny little step takes you a bit closer to your goal. I learn something new from every person I meet, every training cycle gives me a little more wisdom and experience, and I can't wait to see what the next year of training and racing brings!