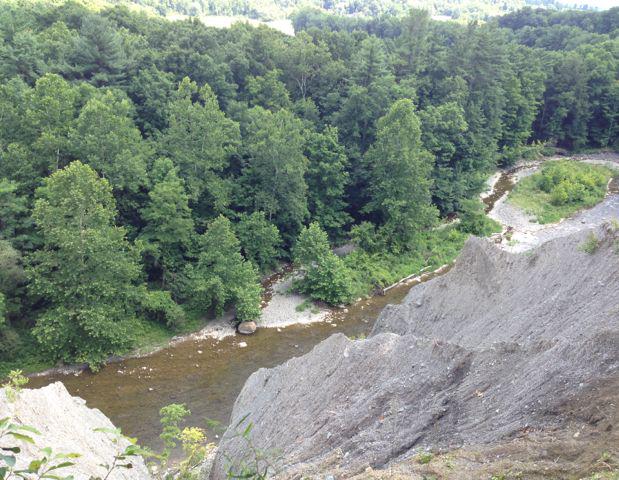 My Achilles had been a bit sore all week, and I was pretty nervous for this run. I stretched well and fit in 2 yoga sessions during the week, took the day off before the run, and I was feeling pretty confident, albeit a bit tired the morning of the run. Jenny had chosen our course, and I was absolutely NO help with researching: I spent 9 hours the day prior driving to pick Elizabeth up from camp (I am not always this hands-off, just this particular time). She asked me to print a map just in case, and I printed a different one than she asked! Having never been to the trail, I popped the intersection into my GPS after stopping at Wegmans for some Aid Station food and headed up the hill to the Monkey Run Trail on the Cornell campus. As luck would have it, Jenny was arriving at exactly the same time, so I followed her the last mile and we turned into the parking lot together. We stashed her car there and then took my car to our starting location. Now we'd have two stocked aid stations! 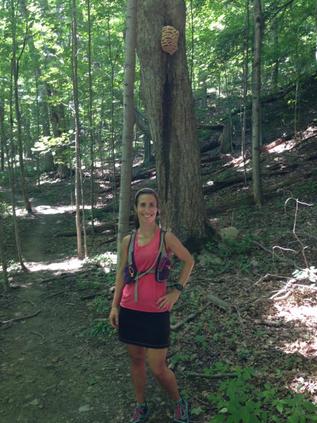 Me on forested trails

The run started out nicely, but we hit a field rather quickly. The field was so wet our feet felt like we'd crossed a river! It was mile 3 or 4, way too early to adopt a sour attitude, but I admit that between my wet feet and aching Achilles, I was feeling a bit like Eeyore. Jenny asked me to pull out the map, and I flippantly said "Oh yes, I printed a different map because it looked more detailed." She was super sweet as she said "Oh, I think my map was a bit more detailed." Yup, my map didn't show the area we were currently lost in, so we called it up on her phone. We quickly sorted out our way and headed back into the forest. A few miles later we were lost again, this time in some of the beautiful gardens of Cornell. After looking at the map on a sign, we decided upon a course and headed off. Our first 6.5 miles took us just under two hours of elapsed time. We'd started at 8 a.m. and it was already nearly 10. We were going to be running all day! We hit mile 8 or so and Jenny said very happily, "now the miles are just going by quickly." I was still really struggling and I pouted and said "No they aren't! They are hard! My Achilles hurts! I'm doing something with my stride to compensate making my hips and left knee hurt." followed by, "I don't think I can make it the full distance." Wow, what a great training partner I was this morning.

We reached our first aid station at mile 9 and enjoyed our favorite newly coined "salt and vinegars" that turned into a zippy little tune later in the run, and headed off for a baby loop of a couple miles before the other car stop. During our quick little stop, Scott texted that he had just gotten a PR and won the Master's division in a 5K and both kids won their age group. I was excited for them, but further bummed that the training run I was so psyched for was turning out to be so challenging.

Time did start to fly as the run went on, and my hips and knee settled out. My Achilles bugged me on uphills, but it was fine on the flats and downs. Later in the run, good old-fashioned fatigue set in, but my body really was holding up very well. Somewhere near mile 14 I took my first full spill of this training session, falling flat out on a rather non-technical section of trail. Embarrassed, I dusted myself off and resumed the run. Later, we looped by this same area and I kicked a root full force the way you would kick a soccer ball. It felt like someone had pried my large toenail off! 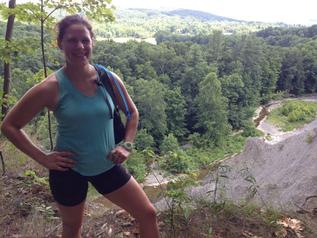 Jenny had just gotten new shoes a week ago from Finger Lakes Running Company. She was wearing her Pure Grit 3s for the 2nd time (and first long run) that day. I could tell she was happily bounding along in them. I was feeling kind of irritated that my shoes felt sloppy on the flats, the field and the road stints. This is something that I've been worried about for Green Lakes. They are fine on technical trail, but not so great on the flatter mixed terrain. On this run, I decided that getting another option for a trail shoe for Green Lakes had moved up my priority list.

We did finish this run! I did know we'd never quit. When we hit the parking lot at mile 25.9 I may have started crying a bit when we had to turn around and do .3 more miles, BUT Jenny started telling jokes and I started watching my GPS. Pretty soon we were done! 6 hours of running time, with nearly 7 hours for the entire outing. It was quite a day.