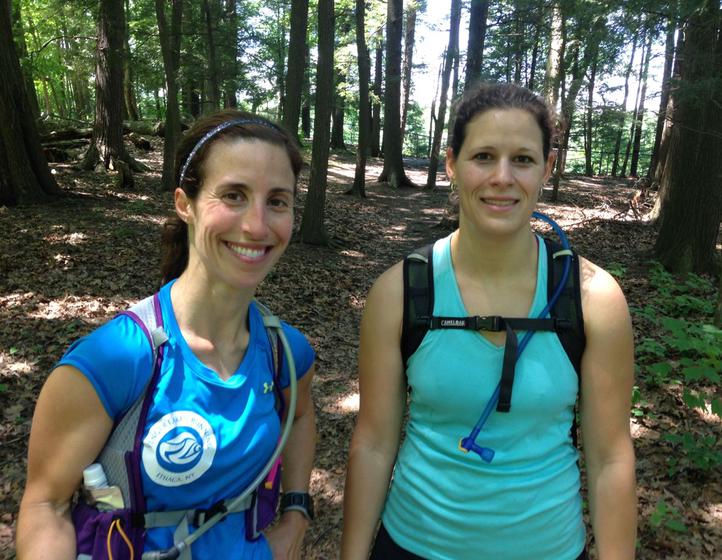 Week #6 was another challenging but very good week of training. Between the weekday running and Sunday's long run I hit 43 miles for the week. My plan changed slightly as it often does, and somehow Scott and I got away from our good solid home yoga routine this week, but all in all things are going well for week 6 (or 11 the way it is on my plan ... 11 to go until the 50K that is!)

This week was really great for training because Elizabeth had a 4 day ballet intensive at Armstrong School of Dance so I had 2 hours on Monday and Thursday to use for training. Monday I had to decide between yoga and running. The plan called for a rest day from running on Monday, but there was an FLRTC group run scheduled. I can so rarely make these runs that I decided I'd run. It was GREAT to join the group and run downtown. I think there's hope for me being able to navigate myself down there without getting lost someday!

Tuesday between work and kid activities there was no time to do anything, so I enjoyed a delightful rest day. Wednesday morning kicked off with my very last favorite spin class of the year. With school ending the entire routine is going to be different for summer. Chantelle gave an excellent workout, and I enjoyed spinning in my normal spot next to Christina. Later in the day it was time to hit trail. With the threat of thunderstorms I headed for the Rim trail to do hill repeats. Scott told me where he had done the repeats on the South side. I decided it wasn't quite steep enough. Seeking a longer warm-up, I continued to the North side. While running up the camp access road, suddenly I wished I had stopped where Scott suggested. This road felt plenty steep and was only .15 miles long. I used it anyway and did 6 repeats. The distance and grade of the hill were both manageable and I while it was challenging, it was not unpleasant. A quick run back to the South side to do 3 more of the proper distance fully rounded out the workout. Those three were SO hard that I was laughing to think that just a little bit earlier I had declared that hill "not steep enough" as though I was an expert hill runner. And those forecasted storms - they never did hit! A funny thing happened near the end. I accidentally did all of these with my sunglasses on my forehead. On my last repeat I tripped on a root and my sunglasses saved me from a real face plant. Out of concern for their well being, when they started to fall I reached to catch them. I missed, but managed to avoid falling on them. Earlier in the week, I had talked with Natalie Kelly at our FLRTC run. She had the same thing happen on trail recently ... but she caught her glasses!

Thursday I had plans to run the Black Diamond trail with a local runner I've not yet met in who is doing the Green Lakes 50K. With 100% chance of thunderstorms during the time we planned to run, she opted to run earlier in the day. I was only able to run at 6:15 p.m. so I decided to give it a go. I also switched my plan to Buttermilk. I have never run it alone, and thought I was up for the challenge. After finishing piano lessons for Elizabeth and for me, I dropped Elizabeth off at dance and headed over. This was probably the BEST trail run I've ever had. I enjoyed everything about it. The storms never came, I enjoyed the chance to think and just had a blast hopping over logs and navigating the trail.

Friday we enjoyed our weekly Body Pump "happy hour" class and I got a little time on the skier's edge. This is always a highlight of my week! Xander had rehearsal for Oliver and Elizabeth had a school dance, so we had to race back to Tburg to get them where they needed to be. We weren't able to go out afterwards, but we did have a nice date at home. Saturday was Scott's trail race and Xander had play rehearsal all morning. Elizabeth and I headed out for a run. She is considering training for a longer distance race this fall, and I tried to talk her into going out with me for 6. After a mile she peeled off to do her standard 3. After starting our run off with a nice 9:40 warm-up pace, I stayed slow and comfortable on pace for a little longer. At the base of Rabbit Run my average pace was 9:13. I always have to set some sort of intention at the bottom of that hill, so my goal was to not lose pace. Arriving at the top with a 9:12 my last goal for fun was to get back to my house with a 9:09 overall. Arriving home with a 9:08 I was happy with my road run. 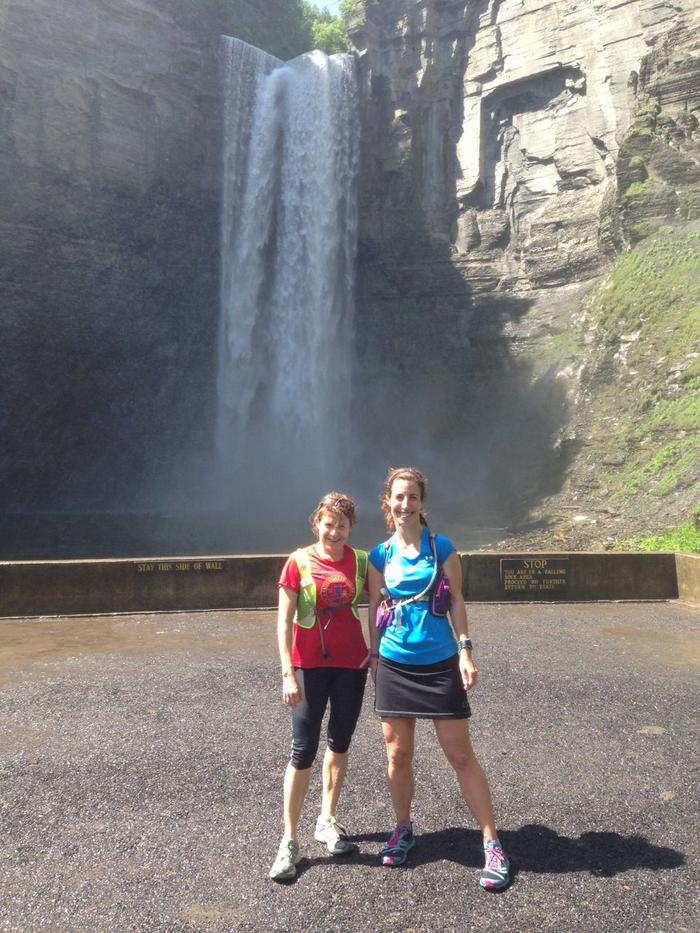 Sunday was our big 20 mile trail run. After doing Buttermilk/Treman last week we opted to give ourselves the easier terrain of Taughannock Rim and base trails this week. We started from my house, stashed a car at the Overlook as our Aid Station and off we went. Christina and Jenny were both battling head colds while I was in fine shape to run. I felt bad for both of them, and worried about whether they'd make it but they both powered on. Christina joined us for our first 7 miles and then we continued on our adventure. This went really well. The temperature was perfect, the air was delightful and we managed to stay upbeat for most of our run. We knew the last 3 miles were going to be on road uphill, and while we briefly considered staying on trail and just driving my car home, we were tired of looping by the end. The hardest part of this course for me today was frequent entry into "civilization". We ran the base trail 3 times and each time there were a lot of leisure walkers out on the trail. It feels kind of weird to be around all those people with our hydration systems on and blowing by them as we run. However, the Green Lakes 50K will have this same thing with the same almost completely flat run, making this a pretty good thing to practice! We also felt how different this trail was from Buttermilk because it is either up or down. There aren't very many rolling up and down hills that are nice and gradual. We should have done the open part of the Cayuga Lake Triathlon course to approximate the grassy part of Green Lakes, but it was full sun and we didn't have visors or sunglasses. We opted for the cover of trees instead. Jenny managed to go the distance with her head cold (yay Jenny!) and we started thinking ahead to next week's 22 miles! We realized that when either of us has an event at any point in the day, it makes it really challenging to schedule. We joked about people asking us what we did that day. "Oh I ran 20 miles." And then they wait to hear more and we say "yup, that's what I did with my Sunday." Hmmm. Of course there is time left, but it does feel very long compared with road running! Scott used the find my iphone feature to find us and surprised us with ice mid-run. It was great to emerge from the woods and see him with Xander. They were headed to Xander's soccer game and made a little pit stop to cheer us on.