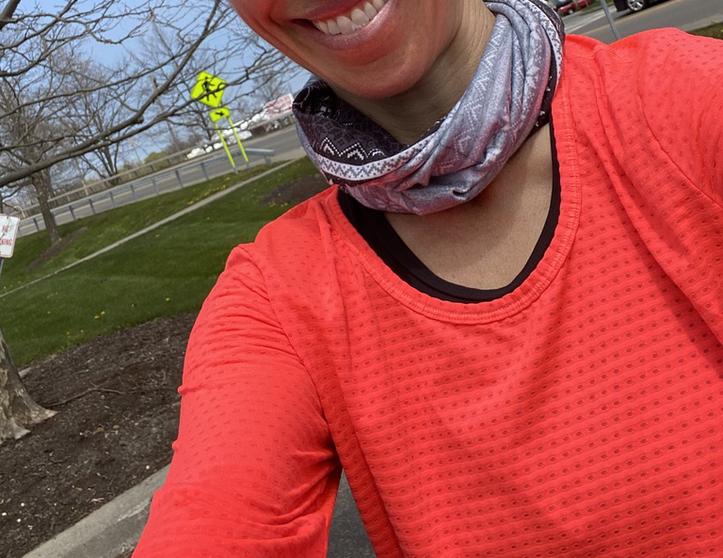 Elizabeth and I started our 2nd month of daily hikes. On the morning of April 16th we awoke to snow and COLD. We hadn't photographed our first month, but this was enough to make us decide to photograph month 2!! Going forward we're taking daily pictures. We're mostly hiking the rim trail near our house, but every now and then we venture onto another trail. We've hit the Black Diamond Trail and Buttermilk Falls State Park trail as well. 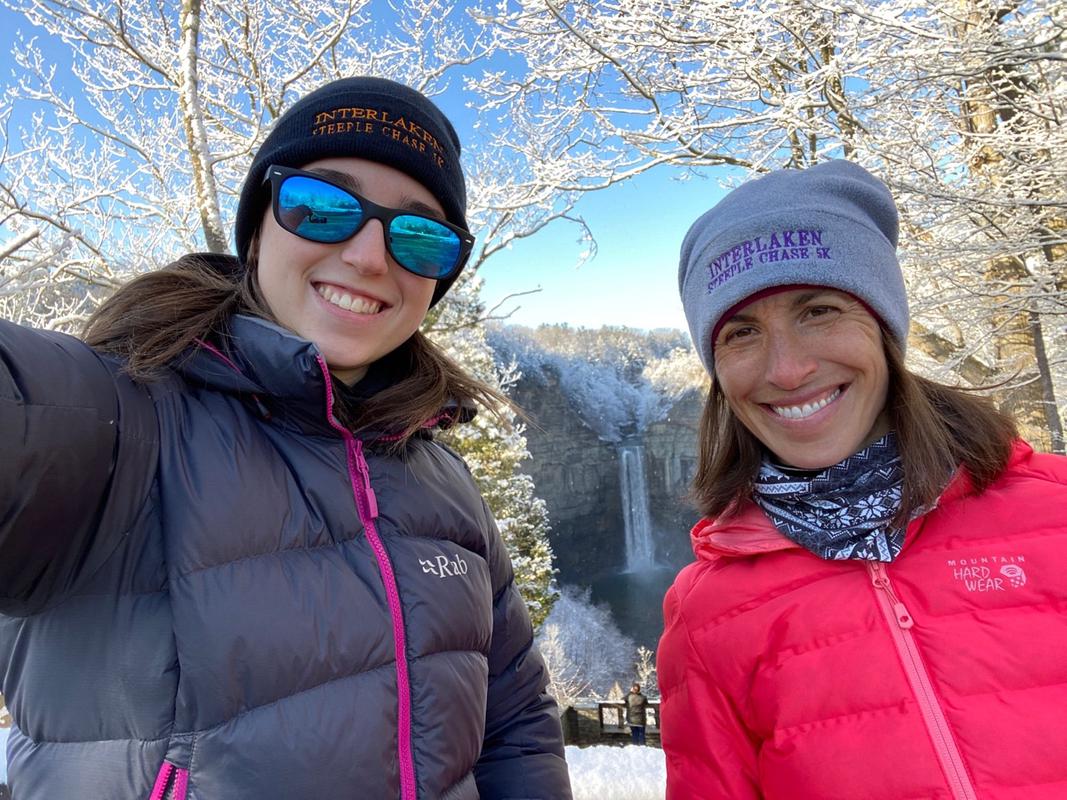 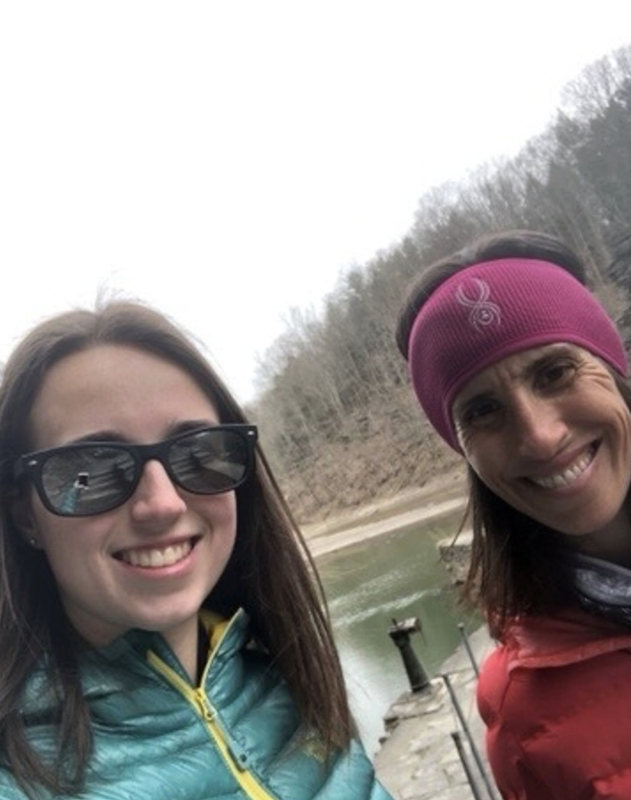 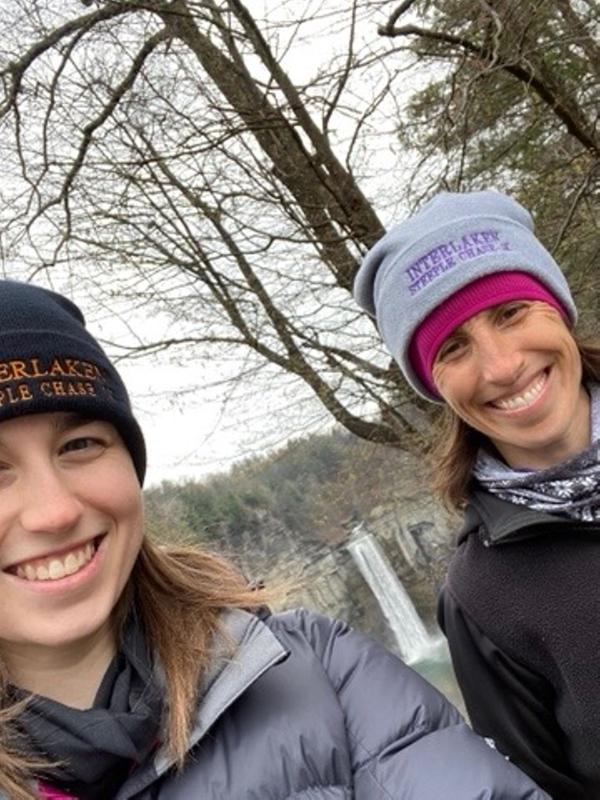 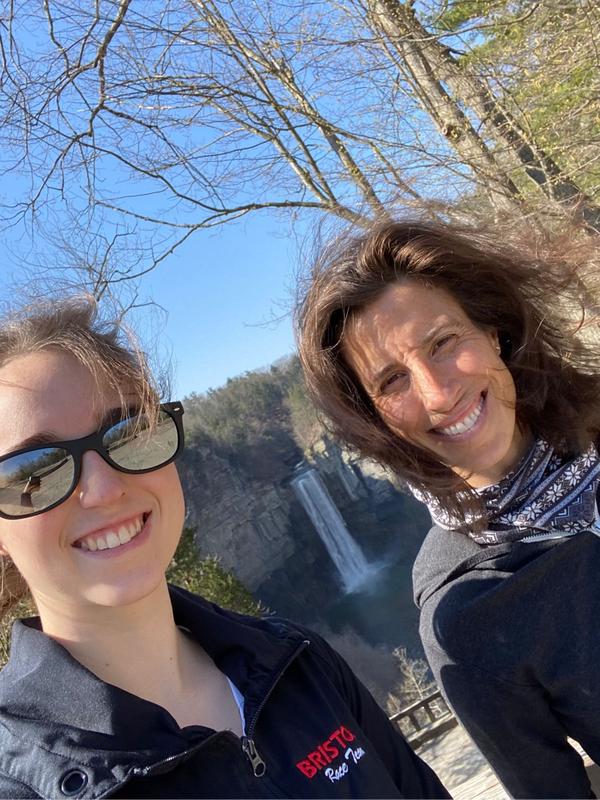 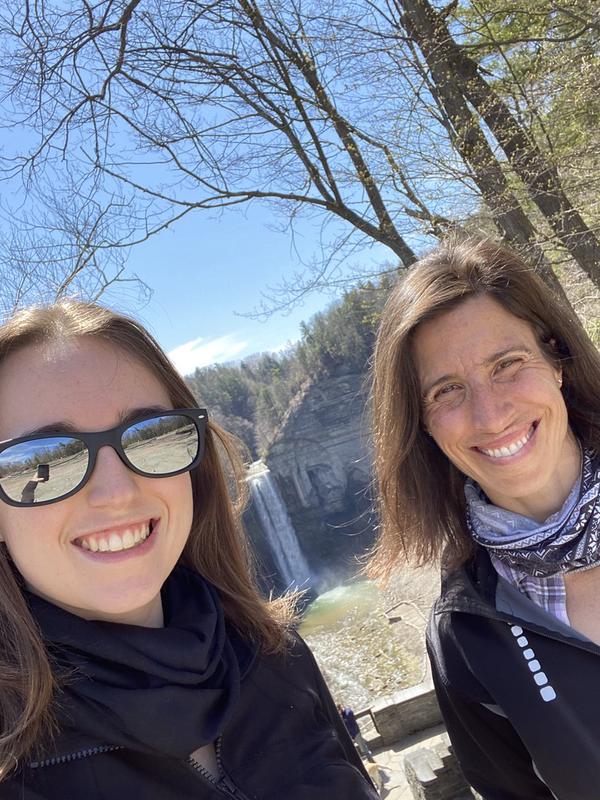 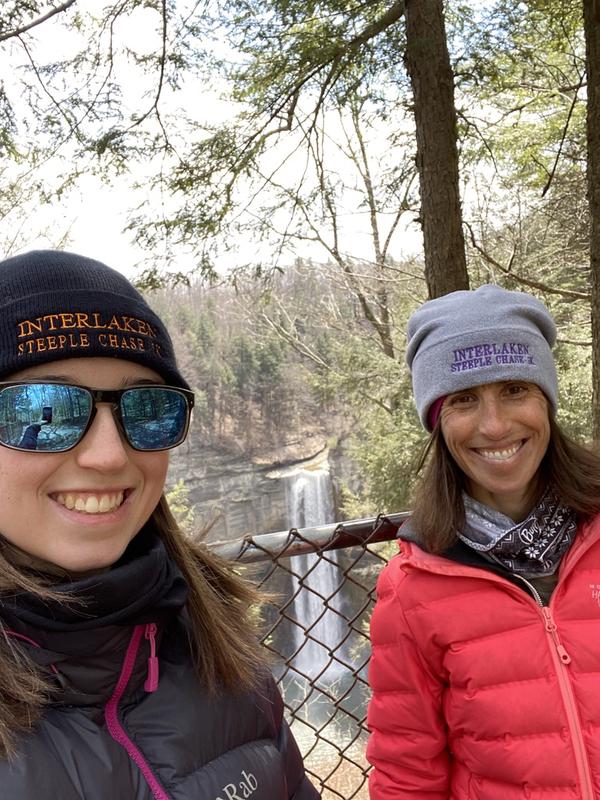 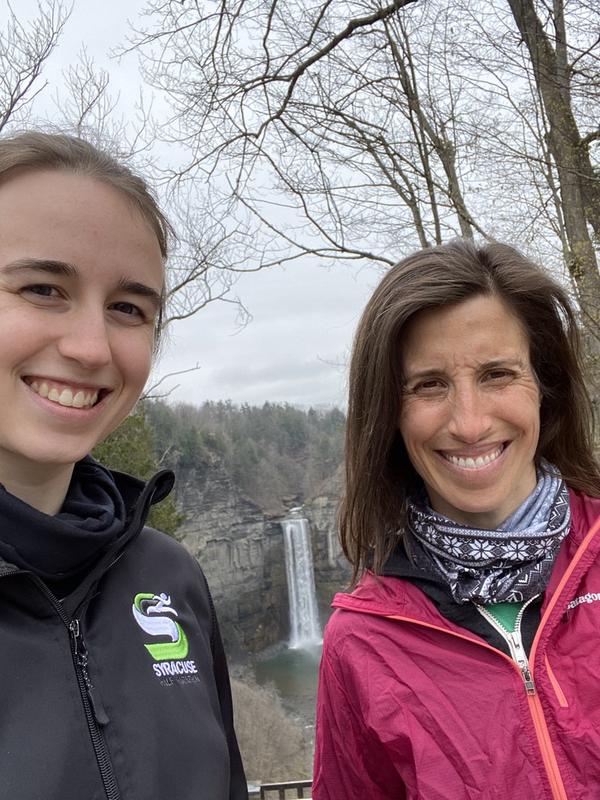 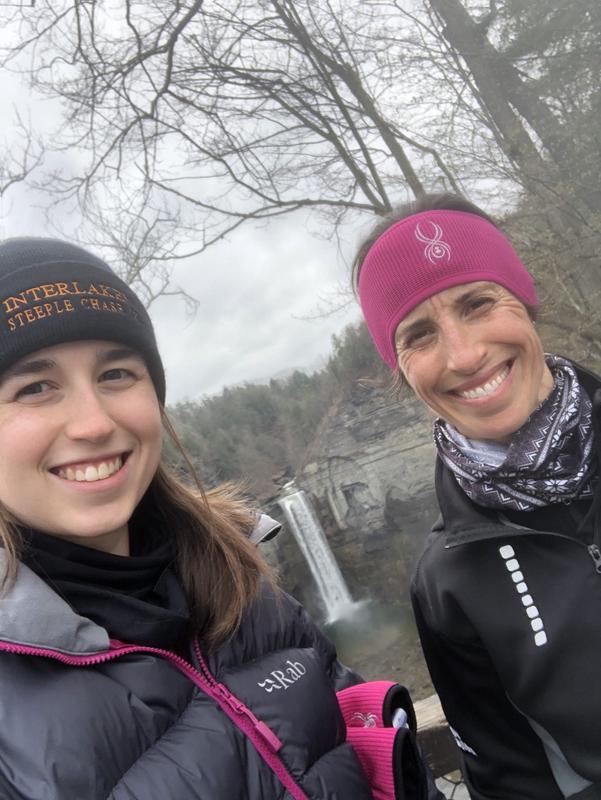 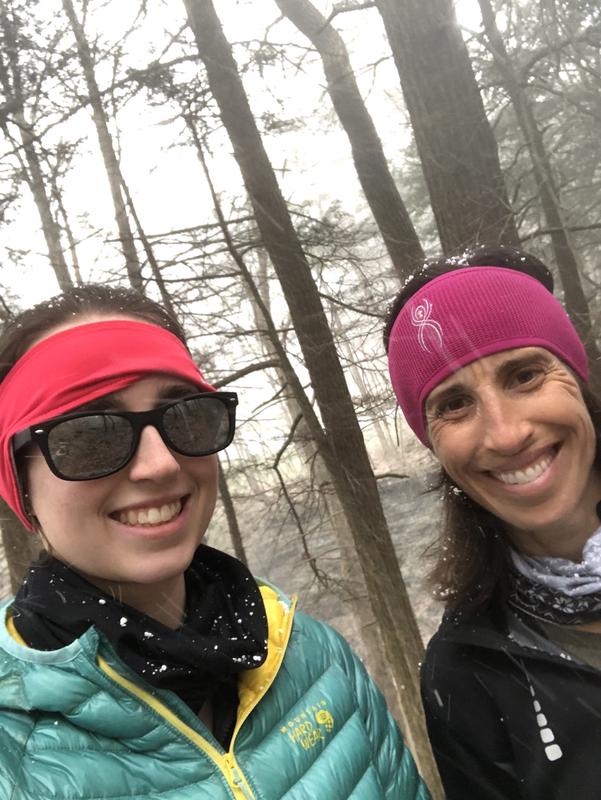 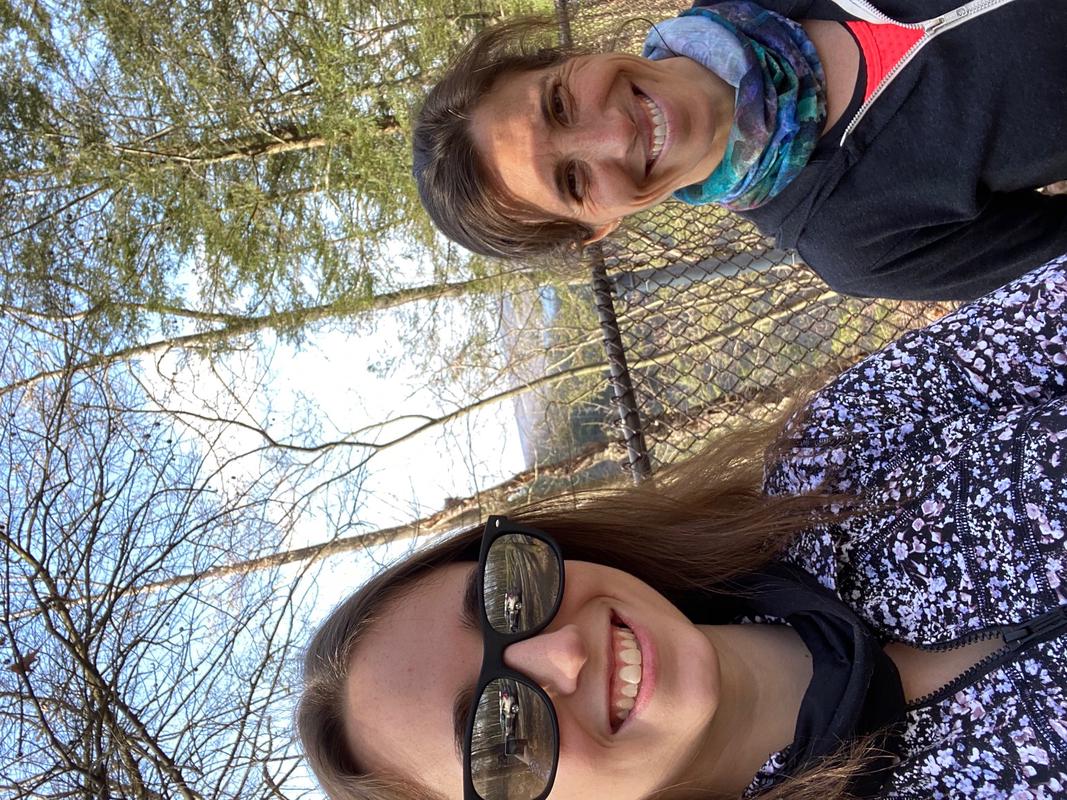 Highlights from these two weeks

Week 15's plan called for a 16 mile long run. Scott also had a 16 miler and Xander had a 19 miler on his plan. We all agreed to run a long run landing in Ithaca at the base of the black diamond trail. I ran 5 miles in town, grabbed a sip of water and started the downward run toward Ithaca. I experienced so many emotions during these 16 miles! At the beginning as the wind was swirling around me I chastised myself for heading out so late. The morning had been lovely and now the weather was coming our way. I ran into a student and her family walking and felt joy. It is so fun to see people I know enjoying the opportunity to get out. I waved eagerly and picked up my step just a bit! As I entered the trail, I noticed that most people were exercising in masks. I had been wearing my Buff every day, but it was warm today so I left it off. I felt suddenly naked and out of compliance even though the governor was clear that we needed to wear masks only when social distancing is not possible. On this trail it IS possible - still I made a mental note to always wear the Buff, no matter what the weather.

Around mile 10 a man with really fun purple, green and blue hair had the best t-shirt. I told him I loved his shirt and hair as he whizzed by me on his bike. His shirt said: 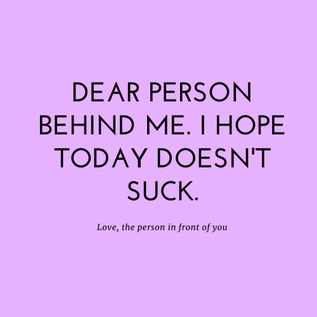 As I hit mile 14 I was still feeling happy from his t-shirt as it occurred to me that I'd run more than a half marathon and was feeling perfectly fine. My pace picked up a bit as I hit the last portion of my run. I knew that Elizabeth was waiting for me at the end of the trail and that soon the boys would bound by me. We had staggered our starts in hopes of winding up near each other.

Back to back semi-long runs

The Hanson method has you do back to back semi-long runs to help you learn to run on tired legs. This week called for an 8 miler followed by a 10 miler. They were supposed to be weekend runs, but the way the forecast fell Scott and I shifted them to Friday and Saturday, letting the rainy Sunday be a bike day. As a result, my legs were a little bit tired at the tail end of the week. Friday's run was chilly and drizzly and it felt hard. However, Saturday's 10 miler was a highlight of my week. The forecast called for a high of 58, but when I was due to run at 11 am it was 48 degrees. I felt a strong desire to go SOMEWHERE. I hopped into my car and decided to drive to Cass park. I don't typically love running in the park, but today I knew I'd see some people out, get to see the water and break up the run with some (but not all) of the run on the Black Diamond Trail. Less than a mile into my run I ran into one of my friends. I teach her daughter Algebra. I was so excited to share that her daughter is really helping me keep up my spirits during this time. I look forward to her (and her classmates) enthusiasm in our 3x weekly live classes. We had a lovely little conversation and then I continued my run. While running I focused on savoring the time, the opportunity to be out and the joy in the sunshine.

On the very last day that the Finger Lakes Running Company was open this spring before the retail shut down, I bought new shoes. At the time in mid March I was just projecting out that I'd be close to wearing out my shoes right before my marathon (Memorial Day weekend). At the time, the marathon wasn't cancelled yet and we really didn't think that it would be. At the time I figured I could just buy shoes later when the store opened up again, but knew I wanted to support Ian now. The past week my shoes started to feel worn out. Xander (my expertly trained shoe fitter) examined them and said they looked like they should be replaced. Still, I wasn't sure. It didn't feel like it had been too long since I started using them. Then, the very next day I received my alert from Strava "time to get new shoes" and thought "wow Xander knows what he's talking about!" I had put over 400 miles on these and it WAS time. On the morning of my 10 miler I laced up my new shoes. As I drove to start the run I was feeling tired. I actually considered hanging out and reading a book and pretending that I ran before driving home. Wow that is a low place to be!! Instead I kicked myself out of my car and started the run. I think I was a mere 5-10 steps in when I realized today was going to be a GREAT run! Thank you FLRC!

Other things to note about training

As we near the end of the training cycle, we're getting ready to run a virtual race in support of the Finger Lakes Running Company. Next week's run calls for a 6 mile followed by a 16 miler. I'll either keep that and bump the 16 miles up to 19 or I'll drop to 3 and 19. This race is a 19 mile run! I look forward to the challenge. I've only done one 20 miler during this training cycle so this will be my 2nd longest run. I designed this plan with a combo of Hal Higdon and Hanson methods and it is light on the long long runs. I could alter one of the last two weeks and throw a 22 miler in there instead of an 8 followed by a 10. I may do that because I don't really feel prepared! However, being that this is our own "race" and my plan is to just run and savor it I don't feel terribly stressed about being light on long runs. I know the last 6 miles will be hard however you slice it!! It is almost time to consider the route and the post run food. We are in the final month of training now.

There are 62 other posts like this one. Here are some other recent ones: