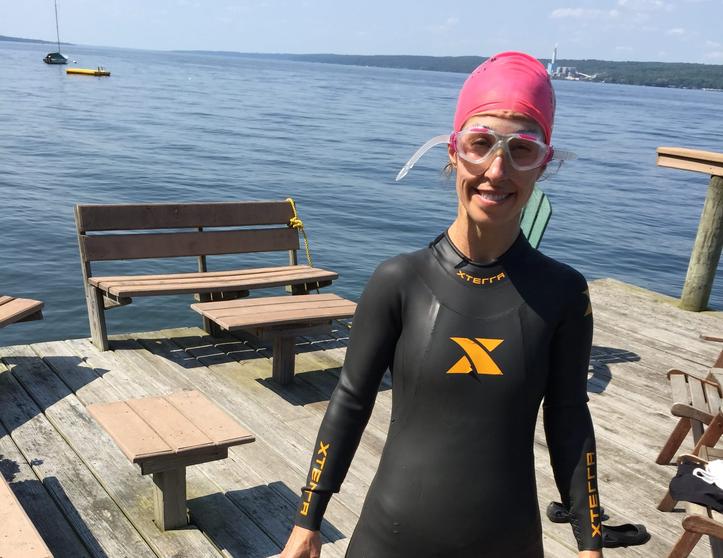 Only 3 days remain until the Cayuga Lake Triathlon. I've been in the lake 14 times since July 2nd. Prior to that I took an entire year of Total Immersion swim lessons with Shane Eversfield. During my self declared, "year of the swim" I've made new friends, learned to embrace the lake, and I've dramatically improved both my swim technique and my pool cardio fitness level.

A few days ago, Katie, Anne and I met again at Kathey's for a full mile swim. Our plan was to go to the middle of the lake with two kayak escorts and then return back to the shore. However, there was a threat of thunderstorms and one of our kayakers was feeling under the weather. Canceling was NOT an option, so we modified our plan; we'd swim two laps of the 1/2 mile close to shore route with Elizabeth as our kayak escort. This plan would afford us the option of an easy exit if a storm rolled in and would let us abort if we weren't up for the full distance.

We arrived at my home away from home for the summer and saw that the lake was rough. It was choppy and to be honest I took one look and thought, "I've had enough practice. I could go home now." But, after a wasp fiasco with the kayak (thanks to Katie for handling the wasps for Elizabeth) and a spider web blocking our access to the ladder (I was brave enough for that) we were in the water. The current was strong and it was going with us so our first .25 mile took us a mere 7:45. We worked to swim next to each other to feel the proximity we'd feel in the race and get used to being amongst other swimmers. I found it comforting to be near them. As we turned around, we could feel the current pushing us backwards. It felt like we were salmon swimming upstream as we slowly made our way toward the big landmark of the blue and yellow water trampoline. Time passed slowly and I counted my strokes to mark time. 699, 700, 701, was interrupted by Elizabeth saying, "Mom you are getting far out, can you aim back toward Anne and Katie?" I looked up and in my intense focus on counting I had headed 25 yards out into the lake. I dropped the counting and headed back toward them. Finally we made it to the dock with a total time of 26 and change. As hard as the return trip was, I still couldn't process that it took us THAT LONG to get back. Really?? I felt done.

When it was time to start the 2nd lap I just didn't want to. I looked at Anne and Katie and said, "I could be done." They both responded cheerily that they could go on. I pondered for a moment. It would have been easy to swap out the single kayak for the double and join Elizabeth as the kayak escort. I'd be relaxing and enjoying the ride while they swam. I wouldn't even have to paddle. BUT, I'd feel like a slacker and I knew I COULD swim another lap. I just didn't want to. I popped my goggles on and before long we were off. This time our trip there was even faster at 6:45 and our return trip even slower. Our total time for the mile was something near 56 minutes!

By the time we finished my hands were numb and my teeth were chattering. I was tired but proud. We had completed our 1 mile swim and practiced swimming close. It was a rough lake day and we persevered. Whatever race morning would deliver we felt ready.

As we made our way up Kathey's long driveway, we chattered about how confident we felt in the water. All of us grew so much under Shane's teaching. Not only did we become better swimmers, but we were enjoying ourselves! Anne said she would never have signed up for the CLT if it hadn't been for class. I thought back to fall when I introduced myself in level 1. I felt so afraid to be there, like I wasn't even good enough to contemplate trying to learn to swim. Now, here we had all just finished a mile in the lake.

Later in the week I brought my friend Jenny out to the lake. It was her first time swimming since the CLT last summer. We enjoyed a calm water day and a relatively speedy .5 mile swim (21:20) from Kathey's. I was both happy for Jenny that she could just hop in the water and swim without any drama and jealous that she could just hop in and swim with no training. But, I reminded myself that everyone is an individual and I NEEDED the year of training to get to this point.

Later that same day, Anne and I met at East Lake park for one last swim. We had talked about hiking, but it was 90 degrees so swimming sounded like a better plan. After getting lost finding the park and having a little help from my friend Michael via phone, I arrived ready to swim. Anne had her orange buoy for solo swimming and we were ready. This little contraption is SO neat! It attaches to the swimmer and serves as a flotation device as well as a way to be seen by boats in the water. It was so comforting that I definitely plan to buy one if I will ever be swimming sans kayak escort!

This swim turned out to simulate race condition anxiety for me. I wasn't expecting that. The route from Kathey's house had become my "pool" in the lake. I had my personal kayak escort, I knew which dock I had to swim to and I knew generally when to expect seaweed. This swim altered all the variables; no kayak, no idea where we had to swim to and lots of seaweed in random places. I was more anxious than normal, but found it really comforting to have Anne swimming near me. I kept her little orange buoy in sight and hung onto it when we stopped to look around a few times.

As I write this, I've had my last bike, last swim and last run before the race. I will probably bike with Xander to help him get ready for the youth triathlon and may even swim with him. I will make time for some yoga and then soon enough Sunday morning will arrive. Whatever race day brings, I'm grateful to myself for all the hard work I've put into swimming. I'm so thankful for Shane and his coaching, and to my family and friends for all their support this year. I can't wait to see what the day brings! As Shane reminded us in class, our goal is to be comfortable in the water and to come out with energy to attack the bike and the run. With that in mind, I already declared that next year is going to be "the year of the bike!"